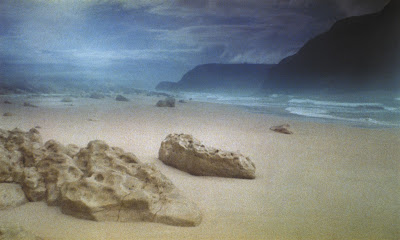 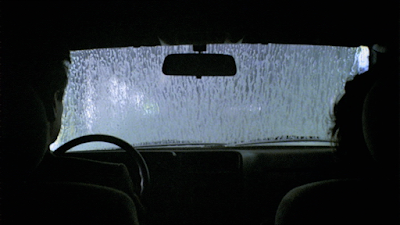 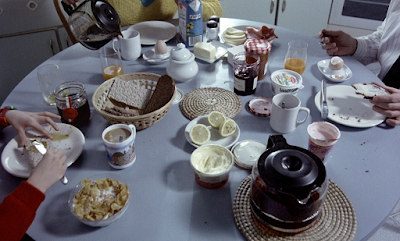 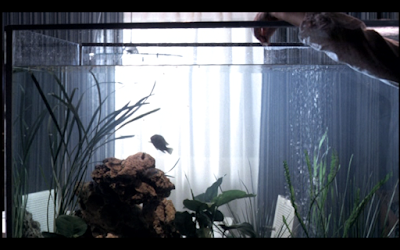 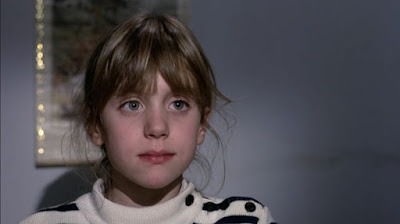 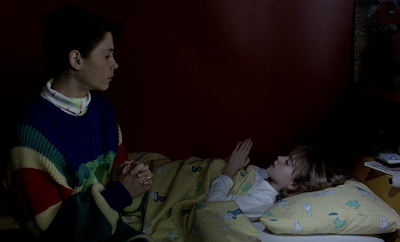 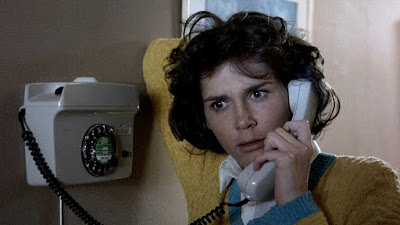 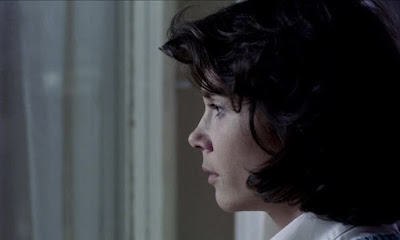 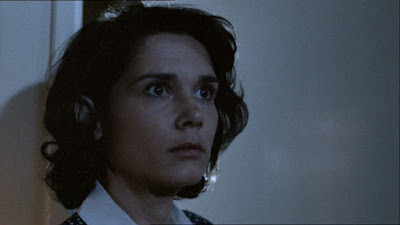 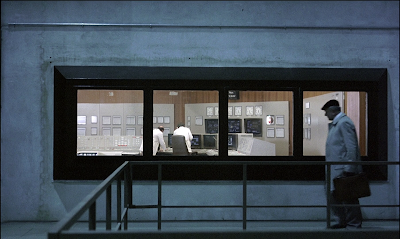 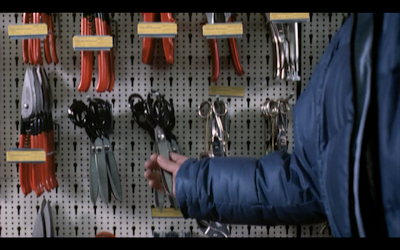 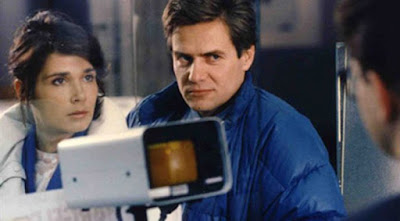 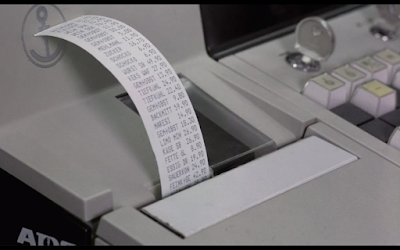 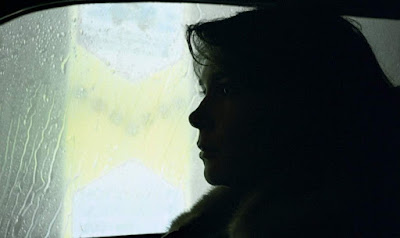 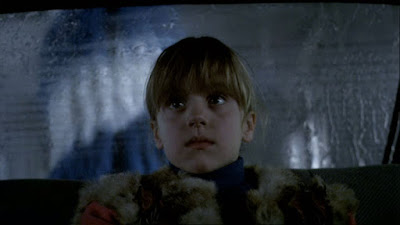 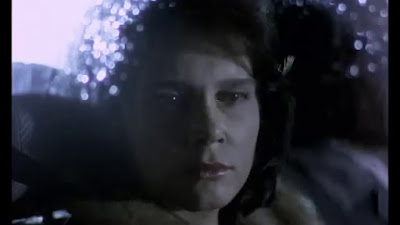 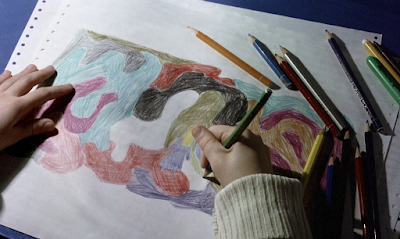 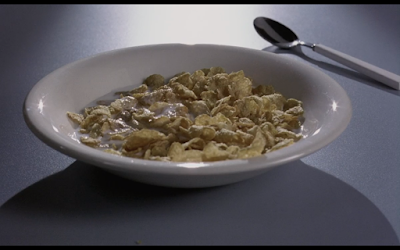 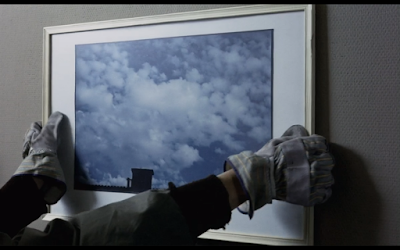 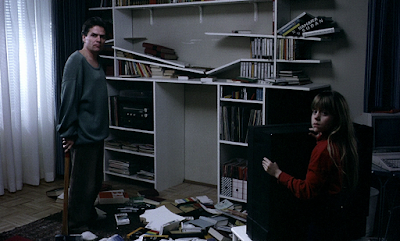 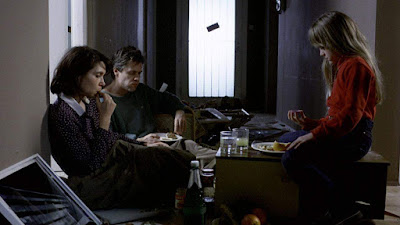 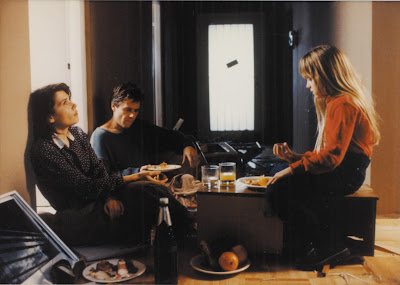 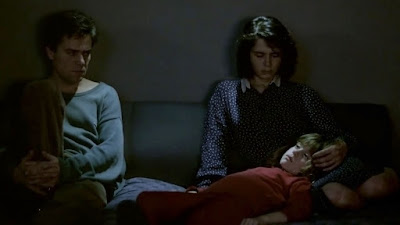 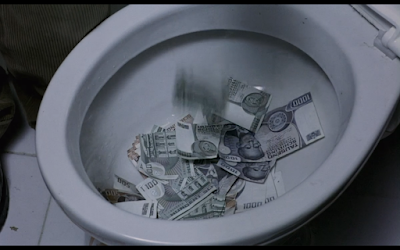 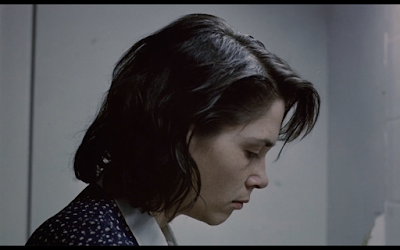 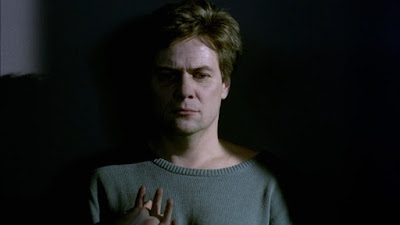 In the beginning, was Haneke already making Haneke films?  Not exactly.  Drawing upon the model of Fassbinder’s WHY DOES HERR R. RUN AMOK? (1970), including similar dissatisfaction expressed in Edward Yang’s The Terrorizers (Kong bu fen zi) (1986), Haneke based his treatise on middle class discontent from events taking place in real life, from a story he read in a newspaper, trying to de-dramatize the monotony of ordinary life, making it as unglamorous as possible, where people are going through the motions, subjected to the constant noise coming from an everpresent radio and television, that appears to be blabbing away in the corner of the room like an unidentified member of the family who won’t shut up, where after a while one tunes it out and becomes numb to the effects of daily living.  A minimalist exercise of anti-theater, Haneke meticulously establishes the ordinary rhythms of daily routines, constantly repeating the same habits, finding little satisfaction or meaning in existence, becoming alienated from the world at large.  His parents a theater director and his leading actress, Haneke was raised by one of his aunts in a working class suburb of Vienna, a budding concert pianist whose career never materialized, studying philosophy at the University of Wien in Vienna, but starting his career as a regional newspaper film and literary critic while also working as a theater director before working as a writer/director in television, showing a penchant for Bressonian-style isolated individuals and understated relationships.  Coming from the European school of Antonioni, Bresson, Pasolini, and even Chantal Akerman, in particular the cage-like prison effect of repetitive motions in Jeanne Dielman, 23, quai du Commerce,1080 Bruxelles (1975), (Michael Haneke, the director’s 2002 Sight & Sound poll vote for greatest overall Top Ten films), finding expression for the soul-crushing bleakness of modern detachment, it’s as if something is compelling Haneke’s characters to behave in a disturbing manner, forced to act against their own interests, set off by vague circumstances that remain ambiguous or anonymous, yet hold an unusual power over them, where they can’t break free from the insidious control.  Chosen to play at Director’s Fortnight at Cannes, the film was also selected as Austria’s official submission in the best foreign language film category, with Haneke and his fellow Austrian director Ulrich Seidl both promoting austere themes of Austrian miserablism, where the middle class is stifled by their obligatory duty to work, which instead of bringing perceived benefits of pleasure find them bogged down into circular habits of monotonous routine, where their inner life spirit is simply sucked right out of them, leaving them empty shells of who they used to be, little more than walking ghosts.  Nothing could be clearer in the opening few moments of this film, which examines a modern family, including scenes at the breakfast table, but their faces aren’t even seen in the opening ten or fifteen minutes, clouding them in anonymity and general disinterest, instead focusing on inanimate objects, such as a digital alarm clock, a pair of red slippers, shoelaces, a door handle, a fish tank, a bowl of cereal, an electric garage door, or the windshield of the car.  When we do finally meet them, there is nothing at all that stands out, as they couldn’t be more ordinary and non-descript.

Shown in three parts, the first two are identified as 1987 and 1988, each depicting a typical day in their lives, showing the degree of discomfort leading such insulated lives, separated and cut off from the rest of the world, leaving them friendless and alone.  Shot in drab colors, with any sense of brightness drained completely out of the screen, it’s almost as if they lead their lives in darkness, where the constant pressure of an all-consuming night is pushing into their daily existence, threatening to extinguish all light.  With the credits rolling before the start, the film is about Georg (Dieter Berner), his wife Anna (Birgit Doll) and their daughter Eva (Leni Tanzer) over a period of three years.  The first image is seen from inside the car in an automated car wash, playing out in real time, where time is all but suspended, at least for the moment, as movements are entirely restricted, suggesting a self-imposed claustrophobic imprisonment, a recurring metaphor that repeats throughout the film, contrasted by a colorful billboard outside the car wash that advertises Australia as a tourist destination.  In an era before the Internet, people routinely communicated long distance through letters.  In the beginning of the first two segments, Anna is heard reading a letter to the husband’s parents informing them of his great success at work as an engineer, while also identifying an anxious-ridden boss who fears Georg may threaten his position.  By the second year, Georg has assumed the boss’s position, seen treating the former boss coldly when he comes to collect his possessions, suggesting an unspoken cruelty.  Anna works as an optician, where there’s a particularly graphic scene examining an elderly woman’s eye, the lids manipulated and distorted beyond belief, shown in excruciating detail, all but expecting the horrible presence of Buñuel’s razor from UN CHIEN ANDALOU (1929).  Perhaps expectedly, due to her mother’s profession, Eva pretends to be blind one day at school, examined by a teacher who quickly outsmarts the girl, discovering it’s all an act.  Discussing it later at home, Anna promises not to hurt her if she tells the truth, but then surprises her with a hard smack in the face.  Even as the family goes grocery shopping, with the aisles of food shown in great detail, yet the faces of the protagonists are noticeably missing.  None of the characters distinguish themselves, nor are they particularly sympathetic, though Birgit Doll is a stand-out performer, showing exemplary control, yet still expressing an inner emotional involvement that viewers can recognize and understand.  Clearly she loves her daughter, affectionately putting her to bed each night, but even this becomes a ritual over time, drained of all meaning.  One random incident seems to have a heavy impact, as they are driving along a rain-drenched highway one night, but traffic is backed up, as heavy machinery is removing a car twisted and contorted into a mangled shape, but dead bodies can be seen lying under a protective tarp, creating an ominous mood of impending dread.  Another car wash scene has the whole family inside, but this time Anna breaks into uncontrollable tears for no particular reason.  This brief wordless moment is one of the few overtly recognizable signs of unhappiness.

With the film described as Part 1 of Haneke’s “emotional glaciation” Trilogy, originally conceived for television, the overall mood of gloom and doom only escalates in the final segment, with many concluding Haneke is an anti-humanist, as his dour outlook appears so fatalistic.  But this is only his first film, so it’s much too early to draw such definitive conclusions.  In one of the few scenes shot in sunshine, the family is seen leaving a visit to Georg’s parents, where they can be seen waving as the family drives away.  In something of a surprise, it’s Georg reading the follow-up letter to his parents, informing them he has quit his job before getting into even more dire suggestions, all of which suggest they have decided “to leave.”  This feels like a major shift, as though they may be moving, perhaps to Australia, though implications remain unclear, growing morbidly humorous as we see Georg stock up on heavy-duty hardware items like an axe, a sledgehammer, a saw, and scissors.  Things grow even more mysterious when they withdraw all their money out of the bank, and then decide to sell their car to a junkyard.  This includes one of the more memorable scenes of the film, as Eva is standing off to the side by herself watching a nighttime riverboat pass by illuminated by lights, suggesting a kind of idyllic reverie, yet the abrupt music heard briefly is a wildly atonal Alban Berg violin concerto, The Seventh Continent - the scene at the car lot  YouTube (2:22), interrupting what might be interpreted as a child’s dreamlike imaginations, reminiscent of Bresson’s brilliantly colorful Four Nights of a Dreamer (Quatre nuits d'un rêveur... (1971), or it may simply be a boat passing by, which in true Haneke fashion is never explained, remaining hauntingly ambiguous.  Returning home in a taxi, a food delivery truck has left behind a gourmet feast, including multiple bottles of champagne, where they gorge on what amounts to a Buñuelian “Last Supper,” splurging in high style.  In another voice over, Georg suggests they were worried about what to do with their daughter Eva, whether to take her or not, ultimately deciding she showed no fear of death, becoming a last letter left behind, continuing to talk over an escalation of unprecedented violence that turns bat-shit crazy, becoming humorous in the dedicated workmanlike manner in which it is done, coldly and calculating, tearing their home apart piece by piece, closing the blinds, demolishing all furniture, cutting up and ripping their perfectly folded clothes to shreds, scattering broken glass all over the floor, leaving behind nothing but a mess of scattered debris.  Reflective of the Haneke methodology, this is shown in a very precise and controlled aesthetic that minimizes cutting and camera movement, including a lengthy shot of ripping up their remaining currency and flushing it down the toilet.  Some have compared this violent frenzy to the spontaneous explosion at the end of Zabriskie Point (1970), the difference being just how methodical it is, given plenty of forethought, like digging their own graves, using the same planned methodology as the mind-numbing routines they carry out each day.  What follows is a nihilistic drift into the void, each taking an overdose of sedatives, sparing one lone television screen that serenades their macabre journey into the afterlife, accompanied by the evening’s entertainment, Jennifer Rush - The Power Of Love (Official Video) - YouTube (4:57), a melodramatic love song that is almost laughable, with the lyrics adding an ironic twist, having lost all meaning whatsoever.  Because so little is learned about the protagonist family, any motive for ending it all is just as absent in this film, leaving viewers perplexed, perhaps serving as shock therapy for remaining complacent.
Posted by Robert Kennedy at 12:08 AM