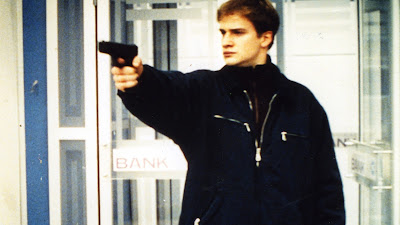 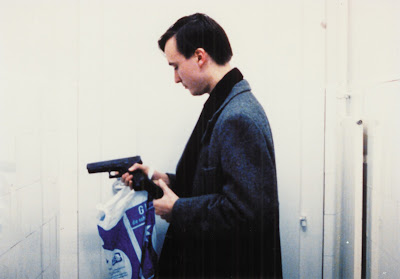 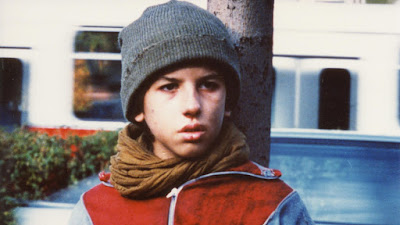 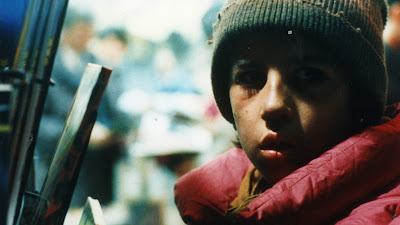 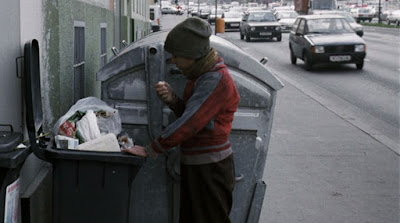 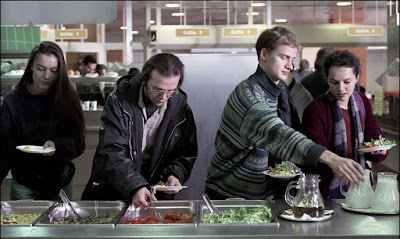 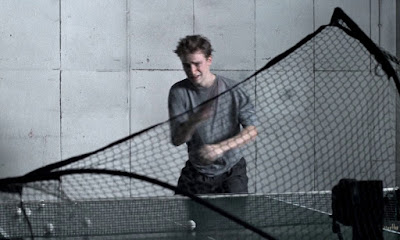 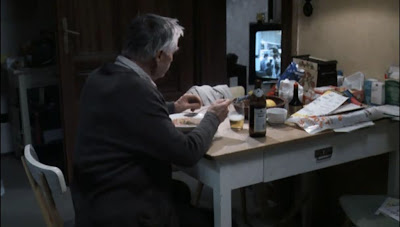 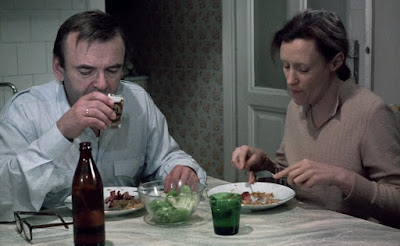 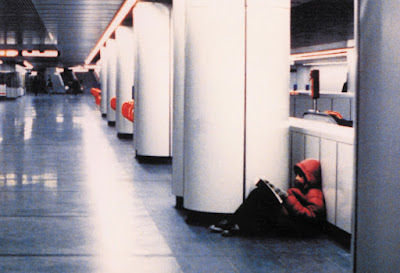 Well that’s two hours lost that we’ll never get back, one of the least engaging films ever seen, dumbfounding actually in its inability to strike a chord of interest, ultimately too drab to come to life, leaving the audience in complete indifference, mostly feeling like a complete waste of time.  However, maybe this was viewed as cutting edge stuff in the early 90’s — hardly, but what’s done is done.  Perhaps Haneke had to get this whole dismal trilogy out of his system before he could make Funny Games (1997), which by comparison literally sizzles with intensity and still remains the definitive Haneke film, leaps and bounds better than anything he had ever done before.  Basically an experimental film at heart, it is what it purports to be, a collection of seemingly unrelated fragments chosen at random all strung together into a cohesive whole, making a comment about the dull repetitive monotony of everyday existence, showing people living in cramped apartments where television sets are their only windows to the outside world, feeding them mush, including a repeating news cycle that drones on all day and night.  Opening with the dry commentary from German news broadcasts, real events are shown through grainy video monitors, including actual reportage covering the Bosnian War, including criminal war crimes allegations against Serbian and Croatian leaders, the Somali Civil War, South Lebanon conflict, Kurdish–Turkish conflict, and molestation allegations against pop superstar Michael Jackson.  What makes this footage startling is not the disturbing content of what’s being portrayed, but how it’s being digested, as people are watching this often raw and graphic coverage with their morning cereal, where it literally becomes ingrained with their daily routines.  In addition, seemingly random encounters between various unidentified people are shown, including casual meetings in café’s, telephone calls home made from a public booth on a busy street, a couple turning out the lights in the bedroom before going to sleep at night, another couple awakening to an alarm clock, offering a morning prayer in the bathroom before the day begins.  Rarely screened theatrically, this film was all but ignored when it was released.  The first of the Haneke films to play at the Chicago Film Festival, where it was actually named the Gold Hugo Award (1st Prize) winner, all the talk was about a culminating final scene based on real life events laced with aimless violence, suggesting this was a commentary about our times.

A familiar theme with Haneke is the influence of television and the technological age, how it overtakes family or social relations in matters of importance in our lives, leaving us isolated, as we’re tragically cut off from one another, doomed to hear the same news report points of view over and over again until we’re at wit’s end, inevitably frustrated and on the edge of impending disaster, though civil strife in the Balkans is a much closer subject to Europeans than Americans who are an ocean away.  Having endured the raging battlefields of two world wars on their soil, including the demolition of towns and communities, the targeting of civilians, rampant ethnic cleansing, with governments, of course, denying what anyone’s eyes can see, all of this had to bring back repressed memories of what happened a half century earlier, echoing the Nazi past, something Austria was historically complicit in yet never acknowledged in the war’s aftermath, where certainly this may have a greater meaning for an Austrian director.  In 1986, for instance, Austria elected UN Secretary General Kurt Waldheim to the presidency until 1992.  During the campaign Waldheim’s wartime service in the Balkans suggested he omitted a notorious part of his history when he was complicit with Nazi deportations and mass executions, to the point where he was banned from entering the United States, while the German press launched vicious attacks on Austria’s conspiracy of forgetfulness.  In 1989, Jörg Haider, leader of the far-right Austrian Freedom Party (FPÖ) was elected to a position of governor while expressing widespread xenophobia and open admiration for the Third Reich.  During the war his parents were members of the Austrian Nazi Party, while many leading Nazis, including Adolf Hitler, were Austrians, which became part of the Third Reich.  In the 90’s, the Balkan wars brought an influx of refugees into Austria, something they previously had little experience with, only increasing Haider’s neo-fascist power and influence.  It was only in 1999 when the FPÖ was invited to become part of the coalition government that fourteen of Austria’s EU partners immediately withdrew their cooperation.  The following year Haider was forced to resign.  Austrian novelist and playwright Elfriede Jelinek won the Nobel Prize for literature in 2004, referring to her country as a “criminal nation” in her acceptance speech, spending much of the 90’s waging a war of words against Haider and the FPÖ.

One of the weaknesses of the film is the suggestion that we are all passive viewers of television and the media, with no apparent will of our own.  Haneke’s insistence to show everpresent computer and television screens throughout the film is no accident.  However, side-by-side with war footage is the inclusion of celebrity coverage of Michael Jackson, which has the effect of equating their importance in the eyes of the world.  Rather than humanizing or elevating views, this may have the opposite effect of dumbing down viewers, where all television coverage becomes meaningless and superficial after a while, especially if it repeats itself nonstop, in one ear and out the other.  Similarly, by cutting off many of these fragmented scenes before they have a chance to develop, viewers are prevented from identifying with any of the depicted characters, none of whom are referred to by name.  In fact, the often incoherent and rambling presentation of events has a way of desensitizing viewers to what they see onscreen, intentionally making them feel uncomfortable, reflecting the isolating effects of a technologically advanced western society.  As if to buttress this point, the film takes place in the week leading up to Christmas, considered a family holiday, where Haneke includes a contentious telephone call between an elderly father and his estranged daughter, focusing exclusively on the alienation of the father, who continually rails against his daughter, angrily denouncing her on several occasions, though this is in response to her denying him opportunities to spend with his granddaughter.  Due to the length of the call, bordering on eight or nine minutes, with a mute television displaying unending images in the background, viewers get a sense of the significance of this call in the man’s life, cut off from his family, lonely, living a solitary life on his own, growing exasperated at her disinterest, yet he has little else to do in his life that means as much, finally getting a chance to speak to his granddaughter, where his tone instantly changes, becoming inquisitive and affirming, calling her “Sweetie pie,” the apple of his eye, before switching back to his daughter, speaking again in banalities, returning to their grumpy disposition, making insulting comments to one another, where this dysfunctional device may actually express the full extent of his desperation to extend the conversation, actually daring the other to hang up if they don’t like it.  Despite the disparaging remarks, this was likely the high point of the day, something he’d been looking forward to with great anticipation.

One of the more startling scenes is a habitual dinner between a husband and wife, which is usually wordless, as they haven’t a thing to say to one another.  This is mirrored by their morning ritual, where she’s seen feeding the baby in her robe while he walks out the door dressed for work, informing her he’ll be back “around six.”  At this dinner sequence, after a minute or so of dead silence, out of the blue he utters “I love you.”  Her reaction is priceless, getting all defensive, wondering why he would choose this moment to utter those words, suggesting it loses all meaning whatsoever in the banality of the moment, which causes him to strike her in the face, an impulsive reaction.  Neither looks at each other or says anything, but are stunned for a minute or two before they resume eating their dinner in utter silence.  Haneke then blends instances of societal rejection, perhaps foreshadowing the more acutely developed Code Unknown (Code inconnu: Récit incomplet de divers voyages) (2000), where a shy and withdrawn foster child meets new parents, with all the superficial smiles and pretend politeness that accompanies the moment, but all she’s interested in is her new room, while there’s also a parallel story about a homeless Romanian refugee trying to make it on the streets, begging for money, pilfering through garbage, always aware of the threatening presence of police, trying to hide and live in the shadows.  It all leads to a befuddling moment of frustration and rage from an impatient young man who feels cornered, his potential options thwarted, revealing how small steps of frustration, anger, and humiliation can drive people into inexplicable behavior, like “road rage,” moving from boredom, frustration, panic, and finally hatred, opening fire at random, killing innocent people and then himself literally for no reason at all.  It’s as if he suddenly went berserk.  Is it really a surprise if this is the most gripping sequence in a stream of banalities?  So what does this really prove?  What’s missing in this film is any sense of community, instead each leads an alienated and isolated existence, living separately and apart instead of being a part of something.  This is the prevailing sense throughout the entire “emotional glaciation” Trilogy, where recurring themes in Haneke films would have to include shots of television, usually showing news coverage, extremely long static takes, no musical film score, cuts to black between scenes, short outbursts of violence, often occurring offscreen, male characters named Georg or George, female characters named Anna or Ann, stories frequently centered around psychotic, violent youths or socially detached characters, with silent credits rolling.  By the end of the film, the television news reports repeat themselves, all but insuring that every ounce of thought is drummed completely out of viewer’s heads, offering a cynical depiction of contemporary life that is not only despairing but doomed.  Thus spoke Haneke.
Posted by Robert Kennedy at 12:01 AM