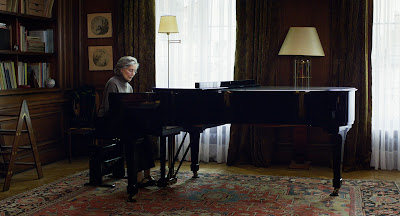 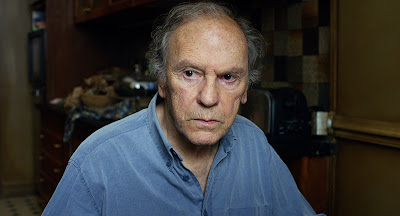 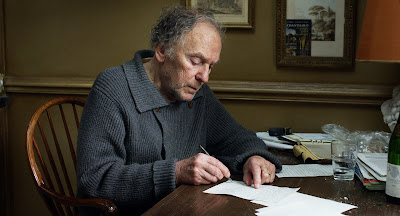 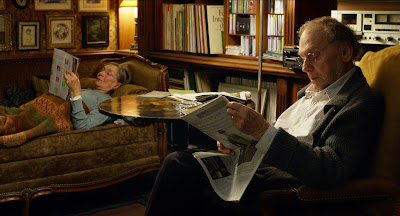 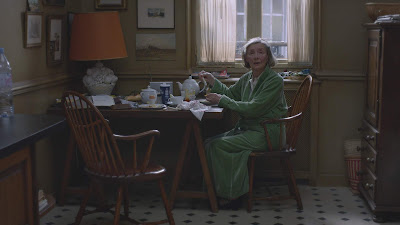 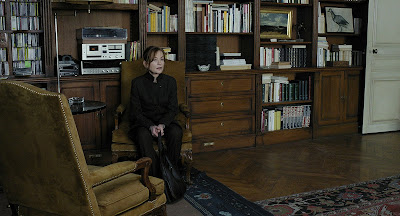 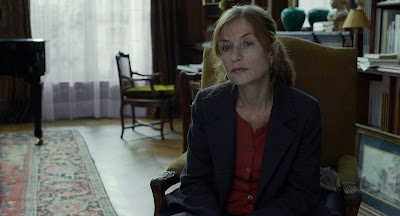 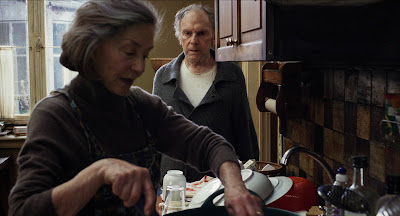 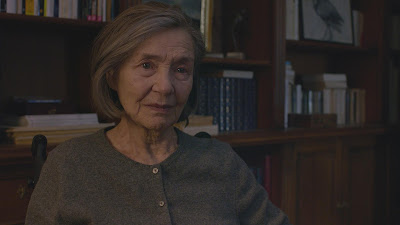 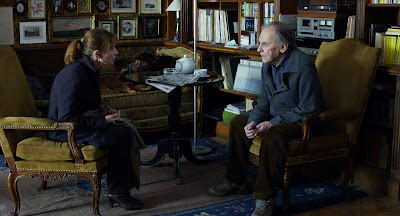 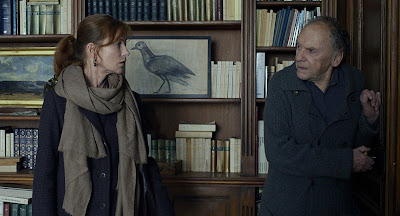 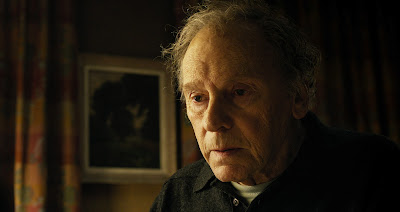 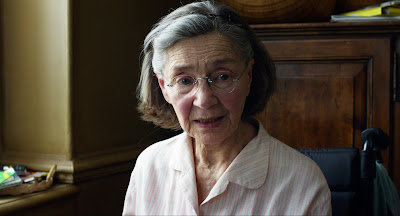 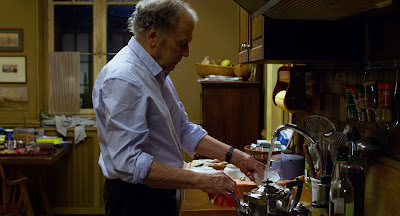 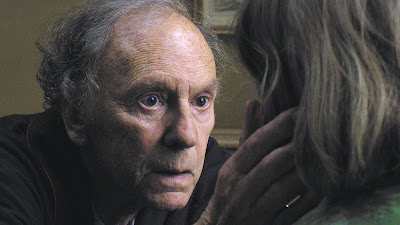 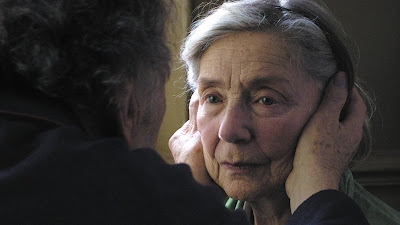 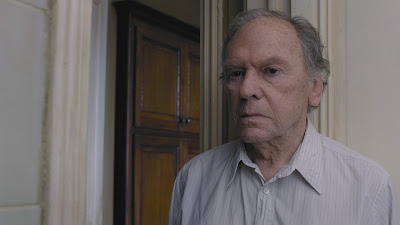 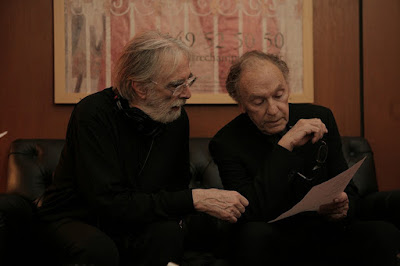 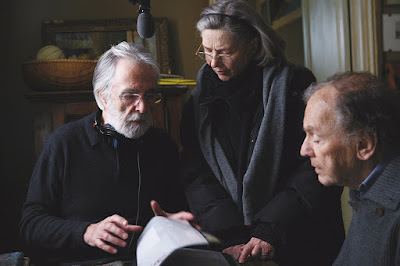 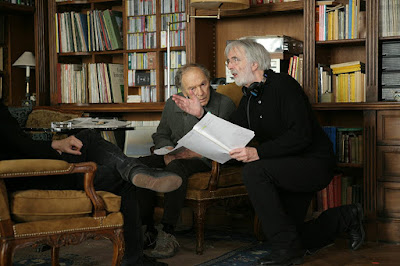 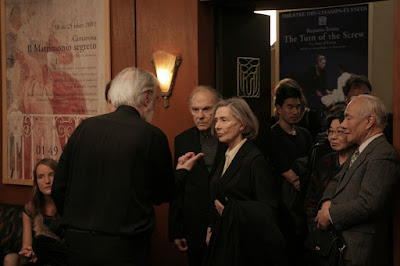 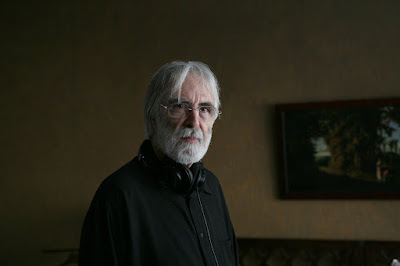 Winner of Haneke’s second Palme d’Or (1st prize) at Cannes, though overly morose, and not without some controversy, as it appears to be a safe and conventional choice, with a Nanni Moretti-led Jury picking this film over Carlos Reygadas’ 2012 Top Ten Films of the Year: #2 Post Tenebras Lux and Wes Anderson’s 2012 Top Ten Films of the Year: #3 Moonrise Kingdom, both devastatingly original and much more inspiring works, while the talk of the festival was the even more fiendishly outlandish Léos Carax revival 2012 Top Ten Films of the Year: #4 Holy Motors, yet the director has made a powerfully devastating film about the horrible indignity of dying, and watching someone you love deteriorate before your eyes, where in your mind they’re still alive and strong, the way you remember them, except they’ve become fragile creatures that can’t help themselves anymore.  What’s different about this approach is Haneke’s unsparing and exhaustively banal detail in depicting all aspects leading up to death, including the unsettling, interior psychological turmoil that plays into such a personalized experience.  Perhaps Haneke’s crowning achievement is casting the aging couple with French New Wave cinema royalty, writing the film for Jean-Louis Trintignant (who’s 81) as Georges, from Claude Lelouch’s A MAN AND A WOMAN (1966) and Eric Rohmer’s My Night at Maud's (Ma Nuit Chez Maud) (1969), a superb actor who hasn’t worked in seven years, while Emmanuelle Riva (85) is Anne, from Alain Resnais’s HIROSHIMA, MON AMOUR (1959), the one who has a series of medical setbacks.  Both appeared in Krzysztof Kieslowski’s THREE COLORS TRILOGY, Riva appearing in BLUE (1993) while Trintignant was the lead in RED (1994), where both personify a cultured European dignity with an undisputed air of intelligence in their roles, which certainly comes into play here, as both have professional backgrounds living in an enormous Parisian apartment with an entire wall filled with shelves of books, including a piano, where she was a revered piano instructor, along with various drawings and paintings on the wall.  This couple is the epitome of cultural refinement, where it’s actually a joy, initially, to watch their clever wordplay with one another.

The initial intimacy is followed by the realization that Anne is likely having a minor stroke while sitting at the breakfast table, where hospital efforts to restore her back to full health fail, leaving her partially paralyzed on her right side, requiring a wheelchair, where Georges has to help her get in and out of bed, her chair, the bathroom, and anywhere else she goes, but we never again see her leave the apartment, creating a highly restrictive use of ever confining space, as if the walls are caving in on them.  While they still maintain a daily routine, where the mundane details become the surgically precise structure of the film, they simply don’t get out anymore, so all they have is each other, music, and photograph books of earlier memories.  Their daughter Eva, Isabelle Huppert, shows obvious concern, thinking her mother should be receiving round the clock hospital care, but after her initial experience, Anne has no interest in ever returning to another hospital.  Eva complains to Georges, as if he’s not doing enough, but he’s taking care of her himself, feeding her, helping her perform the daily exercises, with nurse visits three times a week, and the doctor every other week, but Eva is devastated when her mother has another mild stroke and loses much of her speech, where her indistinguishable words don’t make sense and she can’t make out what her mother’s trying to say, which only becomes more disturbing.  None of the medical setbacks are shown, but happen incrementally, where Anne, once a fiercely stubborn force to be reckoned with, becomes completely helpless, requiring full-time care, which Georges is happy to provide, though it is exhausting.  He is the consummate picture of a man giving his undying devotion to the love of his life, where he is still consumed by her presence, still filled with the incredible aura of her life.

But no matter how well educated and culturally aware, this never prepares anyone for watching a dying partner, where the daily grind eventually grows frustrating, especially when all you’re looking for is just a tiny sign that the person you’re married to is still there.  Haneke has a seamless approach to unraveling his film, where memories and dreams are mixed into the daily routines, reflecting the inner thoughts of those onscreen, where the mosaic of mixing them all together is an extremely accurate reflection of their existence.  So too is the way Georges starts hiding just how ill Anne is becoming, especially from Eva, who continues to call for the latest updates, where his energy to respond without anything hopeful to say simply disappears with each passing day, yet she persists, which from Georges’ point of view feels like an invasion, as all this couple has left is a few private moments.  The energy it takes out of her mother for one of Eva’s visits is something perhaps only Georges understands, which leaves Eva even more devastated as she simply doesn’t know what else to do.  Georges, of course, knows he’s already providing all there is to do, but he can’t change the agonizing twists of fate.  The lingering finality of the experience is hauntingly sad, as there’s nothing about it that’s easy or refined, where the underlying theme that persists throughout the film is a civilized and genteel couple who are cultured, who understand that beauty stands alongside life’s tragedies, but this still leaves you weakened and trembling at the knees, where nothing can prepare you for the inevitable finality.  Haneke doesn’t make any of this comfortable for the viewer, but it is a daring and exquisitely elegant portrait of what awaits us all, given a poetic and wordless farewell that has a touch of theatricality to it, where there are no neat bows tying up loose ends, instead there’s a sudden flood of emptiness, and the rest is silence.

If truth be told, our own lives may have an overload of painfully prolonged and tragic deaths very reminiscent of what is portrayed onscreen, unfortunately witnessing too many people die in the end stages of cancer, so there is a certain degree of traumatic discomfort when encountering the subject once again, especially with the unaltered, unedited amount of realism mandated by this director, which to a large extent is the dramatic power of the film, the accumulating effects of death shown with such acute detail.  As a result, this is not a film likely to be revisited again.  The film is reminiscent of Maurice Pialat’s THE MOUTH AGAPE (1974), another film about a woman slowly dying from cancer, a starkly realistic portrait of death, told in segments of real time with long takes of her lying in bed.  While Haneke narrows his focus to an aging couple very much in love, Pialat paints a satirical portrait of the woman’s family avoiding bedroom visits or any dealings with sickness or death as they instead find ridiculous ways to pleasure and amuse themselves as they all wait for her to die.  In contrast, Haneke shows us the face of death through an exacting control over the increasingly oppressive material, confining actions within a ruthlessly restrictive space, which seems to parallel Georges’ efforts to maintain control over his beloved wife, right down to locking her inside a room so no one else, including her daughter, can see her in such a deteriorating state.  Haneke has always had a deep connection with suicide, preferring a dignified exit, sparing the dying from the agonizing medical atrophy, instead seeing it in its most simplistic light, which may be seen as an act of human kindness, however wretched it appears.  Once distanced from Haneke’s film, the more one appreciates a certain simplistic perfection, though one can't yet determine overall greatness when the subject matter alone is something that would likely never be returned to, so as a one time only experience, how significant can a film be?   Might the same be asked of Haneke’s own loathsome Funny Games (1997) (1997), or Pasolini’s SALÒ, OR THE 120 DAYS OF SODOM (1975)?  Still can't answer that perplexing question.  Final thoughts, however, are appreciating the film’s tenderness and restraint, including the unique way Haneke expresses compassion through unspoken, interior thoughts and a highly inventive use of visual cues, offscreen sound, and original imagery.
Posted by Robert Kennedy at 12:05 AM