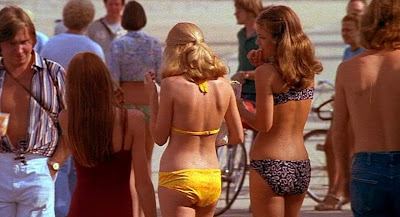 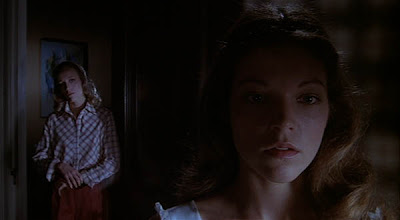 One of Pauline Kael’s favorites, a movie that meets her loving criteria of trashy films as art, where according to Michael K. Crowley from The House Next Door Objects of Appalling Beauty: An Appreciation of Brian De Palma:  “She called his films serious, compared them to works by Godard and Antonioni, and devoted pages and pages to cataloguing their virtues and, when necessary, their deficiencies. Certainly one of the most daring sentences she ever authored appeared in her 1978 review of The Fury, in which she asserted that De Palma had at last directed a movie that surpassed in intensity, vision and number of classic sequences anything directed by Hitchcock. In her defense of De Palma, Kael made adversaries and—in the eyes of the critical establishment—jeopardized her credibility. She was pilloried and even parodied by other critics. But she never backed down.”  Kael went further in her admiration for this film:  “This finale -- a parody of Antonioni's apocalyptic vision at the close of "Zabriskie Point" -- is the greatest finish for any villain ever. One can imagine Welles, Peckinpah, Scorsese, and Spielberg still stunned, bowing to the ground, choking with laughter.”

Where does one begin?  This kind of overpraise is more shocking than the film, which chugs along like a typical B-movie, carrying the weight of plausibility on its shoulders despite the presence of improbable stars like Kirk Douglas and John Cassavetes, both extremely intense individuals in their own right, who despite their opening cordiality turn into arch enemies in the film.  Following the success of CARRIE (1976), what did the world need during the post Vietnam era of the 70’s but another telekinetic horror movie, this one starring two similarly endowed college age kids, Andrew Stevens as Robin Sandza, Kirk Douglas’s son, and Amy Irving as Gillian, neither of whom ever meet except telepathically.  The opening sequence is so cheesy that it could just as easily have been pilfered from the latest Elvis movie, where it’s hard not to laugh at the blatant Palestinian stereotypes and the less than spectacular special effects.  Douglas and Cassavetes share a similar history of working for a secret Government organization, which adds to the allure of the film, as following the Vietnam and Watergate debacles, behind-the-scenes, secret CIA organizations were looked upon with outright suspicion, as if they had deceitfully derailed the moral purpose of government in the first place, to provide for the common good, and done so behind everyone’s backs.  To put it another way, Childress (Cassavetes) steals Peter Sandza’s (Douglas) son right out from under him, making it look like his father died, where Peter is declared dead by the U.S. government and forced to live underground for the rest of the film in order to keep the government and Childress from finding him.

The movie shifts to the idyllic sunny beaches of Lake Michigan, where Gillian and her friends are typical teenagers, but Gillian has special powers that even she doesn’t understand, as she has visions that are powerfully real, yet so intense that anyone touching her at the time bleeds heavily, causing a kind of panic for all involved.  Of course, Gillian’s mother doesn’t seem too alarmed and runs off to Europe, never to be seen again in the movie, much of which takes place in recognizable Chicago locations, including a mesmerizing set piece taking place at the now torn down Old Chicago Amusement Park in Bollingbrook, leaving her daughter to fend for herself at a mysterious medical institute known as Paragon, a clinic uniquely specializing in studying the powers of telepathy, where Gillian scores off the charts, as Robin did before her, which catches the eyes of Childress, who secretly harbors his own devious intentions.  It’s Gillian who can see what Childress is doing with Robin Sandza, who's been moved to a secret location where he’s a captive guinea pig, a test rat living under scientific observations where his every move is monitored closely.  Gillian’s identification with Robin is like discovering a lost identical twin, where the power between them is like nothing she’s ever experienced.  Peter, meanwhile, is attempting to track down his son through a nurse at the clinic, Hester (Carrie Snodgrass), where he’s romantically seducing her in order to get information on his son.  Hester ends up Gillian’s only friend there, as everyone else seems to be plotting against her.  Her daring escape plays out like an extended choreographed slow-motion ballet for which there are serious consequences.

Gillian has struggled to keep her telekinetic visions under control, but despite her best efforts, people continue to get hurt, and even worse, killed, which mirrors exactly what happens around Peter, only without the secret powers.  Their very presence attracts danger to anyone who is near, always connected by the hovering presence of Childress, the dark force of evil that wants to corral and ultimately possess her powers, much like the scientists poking and prodding David Bowie as the alien from outer space in The Man Who Fell to Earth (1976).  Where all this leads is to another whirlwind finale, where the world literally spins out of control and all hell breaks loose, exactly what Gillian has been trying to prevent.  Cassavetes, much as he was in Rosemary's Baby (1968), is simply a detestable character, an abomination to humankind, like a villain out of a James Bond movie who deserves a more heinous nickname, as he’s hell-bent on controlling the world.  Searching for Robin, Douglas and Irving are an unlikely pair, as none of the characters in the movie really gel together, instead it’s all about creating the mood and atmosphere of a strangely dark and paranoid world that’s under a veiled attack unbeknownst to anyone except these few who have the fate of the world resting in their hands.  It veers into the world of the macabre, but in doing so, distinguishes this director with another thrilling finale, one filled with operatic grandeur and obsessive hallucinatory moments.
Posted by Robert Kennedy at 5:28 PM