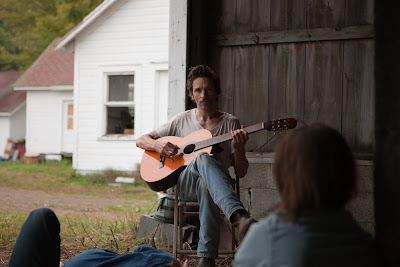 Well you stand there, stand there with the nightshade
Her dripping ripping down your hands
And you ask me, ask me about the lightning
And the lady, lady, lady she understands
It's a dream for the future and the water for the sands
And the strangeness is wandering
Through many callin' lands

I'd give you, give you quite freely
All the clothes on your gipsy bait
And I'd suffer, suffer so long in prison
If I knew you'd have to wait
With the wind scouring sandstone
And the ashes in your grate
Somewhere no devil emperor
The great whale's gone
The holy plate

And this caravan it becomes an alter
And the priests, the priests are big as none
And I'll share, share our time together
Until our time together is done
But your skin it was pretty
And I loved, I loved another one
Now she, she's just like some picture
That has faded in the sun

Winner of the Best Director Award at Sundance, Durkin has crafted a mesmerizing piece of cinema that insists upon naturalism and simplicity, revealing just how effortless it feels to be under the spell of good direction that doesn’t rely upon computer graphics for special effects, creating a murky interior atmosphere that slides back and forth in time, never knowing just where you are at the beginning of each shot.  The idea behind the film is imagining what would happen in the first few weeks after fleeing from an emotionally abusive cult, where your real family has no idea whatsoever what you've been through, creating a culture clash or a psychic rupture.  This is a film that also uses darkness and light, also the edges of the screen throughout, shot by Jody Lee Lipes, where characters move freely in and out of the frame, where often the focus is only in a corner or in a small piece of the larger picture shown onscreen, where occasionally a human face remains split along the edge.  There’s a beautiful visual scheme that is heightened by a brilliant sound and editing design, where it’s the intelligence of the filmmaking itself that distinguishes this edgy feature as the creepiest film experience of the year, reminiscent of Polanski’s REPULSION (1965), where the initial innocence of getting back to nature and living on a farm commune in the Catskill Mountains of New York becomes a psychotic break from reality for Martha (Elizabeth Olsen) when the women become the exclusive property of the cult leader Patrick (John Hawkes), a Charles Manson like persona whose motivation seems to be to redefine the entire world around him in his own image, where everyone and everything belongs to him.  He even takes her name, calling her Marcy May, where she quickly loses all sense of who she is.  Martha is initially confused by an initiation rape sequence from Patrick, where it is the women afterwards who reveal this as the spreading of communal love, that all must remain open to it, as it is a special moment to cherish.  In this way they break her spirit and her conception of free will, and in doing so accept her into their community, offering her a place where she belongs.

Early in the film, however, we see Martha methodically step over her sleeping roommates one morning in an attempted escape, where a near indecipherable phone call for help reveals her jangled state of mind, overwhelmed by the circumstances and unable to make any sense out of it.  She is soon safely in the comfortable upscale surroundings of a heavily windowed vacation home on a lake owned by her sister Lucy (Sarah Paulson) and her British architectural wizard for a husband, Hugh Dancy as Ted.  Neither have heard a word from Martha in the past two years and she’s not eager to share her personal experiences, remaining glum and depressed, uncommunicative, sleeping most of the time, not fitting in here at all, as she finds all the monetary wealth and exhibitionism on display personally revolting, knowing a dozen people could live in this vast amount of space that is currently used by only two.  Her thoughts continually drift back and forth, filling in some of the intimate details of just what happened during her two years, followed by equally inhumane treatment by her more conservative and socially uptight family who find her abnormal behavior morally intolerable, as she just sits around doing nothing, or makes odd behavioral choices that send them into a rage of disapproval, where they continue to be harshly judgmental instead of supportive, not having a clue what she’s endured.  At the farm, Patrick singles her out, making her the girl that matters most of all, but only so long as she latches herself onto him, even writing a song in her honor, Marcy's Song by John Hawkes - YouTube  (3:49), making her feel wanted and special, the exact opposite of how she feels with her sister where she feels utterly helpless, growing more paranoid, completely alienated and alone.

The theme of the film seems to rest with Martha’s haunting confession to her sister:  “Do you ever have that feeling where you can't tell if something is a memory or a dream?”  Unable to reassemble the broken pieces of her life, her spirit remains crushed and shattered, where Olsen is excellent portraying that glum expressionless stupor, much like the other women at the farm, none of whom ever smile or have anything to be thankful about, yet they carry out Patrick’s wishes with few missteps, as he brings the wrath upon anyone who disobeys or even questions his authority.  The deeper she sinks into this world of repressed anger and self-loathing, the harder it is to recognize herself, where what she thought was freedom has turned into involuntary servitude.  Long after she escapes the farm, she continues to imagine that she sees the cult leaders everywhere she goes, believing they are after her, that they will never let her be.  Durkin beautifully interweaves the two threads, where what’s real and what’s imagined become indecipherable, creating an all but unbearable mounting tension and suspense.  This is a powerful film that defies predictability and the norm by using thoroughly self-absorbed and unlikable characters, where the world becomes even more despicable with an unloving family who finds fault with everything she does, becoming holier than thou, super moralistic, symptomatic of their own shallow interests that can’t tolerate differences.  You never really know where this is going, a world with no escape, as Patrick starts spouting Manson gibberish about love is death after awhile, advocating violence and murder, perhaps rationalizing in his own mind some of the evil that is done in his name, where Martha in her mind never stops seeing them, as if they’re about to burst through the next room.  The audience senses they are there, the barbarians gathering at the gate, an ominous threat that pervades both the past and the present, elusive, yet all powerful, expressed through an abstract palette consumed in disturbing imagery.  The spare indie score by Saunder Jurriaans and Danny Bensi haunts the already tense and creepy atmosphere with melancholic counterpoint for a poetic memory play of a woman under relentless psychological assault that couldn’t be a more exquisite offering.
Posted by Robert Kennedy at 1:52 AM