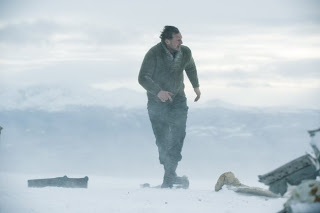 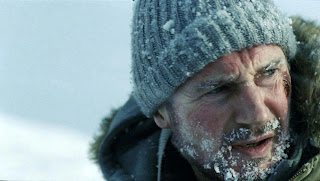 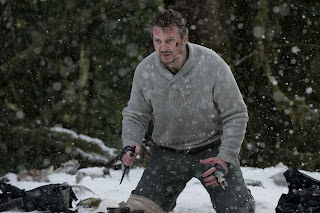 THE GREY                              B-
USA  (117 mi)  2011  ‘Scope  d:  Joe Carnahan           Official site
An interesting mix of wilderness fable and grim psychological drama that tests the mettle of several hard core men working an oil rig in the remote, far north regions of Alaska, narrated by Liam Neeson as Ottway, a man running away from his own personal secrets.  This ragtag group of loners may interest some, described as “ex-cons, fugitives and men unfit for mankind,” but mostly they’re a bunch of drunkards and carousers who think of little other than pleasing themselves.  Hired to shoot wolves or other predators that may attack the men at work, Ottway is a trained marksman and outdoorsman.  Add this to the movies that make great use of snow, as nearly every image of this film shot in ‘Scope by Masanobu Takayanagi beautifully captures the immensity of the snow-filled landscape.  The set up is a plane back to civilization that mysteriously crashes, leaving but a handful of survivors who are immediately overcome by the harsh and brutal elements of the Alaskan wild, also a pack of giant-sized wolves that seem to have them surrounded.  John Carpenter’s ASSAULT ON PRECINCT 13 (1976) immediately comes to mind, as the men must hunker down into a strategic bunker mentality to save themselves, where big shot heroes on their own are usually the first ones to make themselves easy targets.  One might wish Carpenter had the reins of this film, as he’s a master of suspense films.  Carnahan doesn’t disappoint, but the script does, adapted by the director along with short story writer Ian Mackenzie Jeffers from the latter’s work Ghost Walker.  The dialog never rises above ordinary, even as their circumstances are extraordinary, which is the film’s biggest drawback, as the extravagant landscape always overpowers the bleak interior drama.
Once out in the frozen tundra, just seven men survive, where Ottway fends off an attack by wolves, helped by the intervention of others and wounded on his knee, but one of the others doesn’t make it through the night.  On Ottway’s recommendation, they make a break for the distant treeline, where his judgment as leader is immediately questioned, as these are not men used to paying other people’s notions any mind, but are outcasts and social misfits who follow their own instincts.  Nonetheless, in the run across the empty plain, the wolves pick off the weakest link, the one with the biggest mouth who lags behind, which leads to a ridiculous display of bravado, useless out there, as the wolves are closing in.  One by one, the men are being picked off, where all they have are primitive weapons of sticks to fend them off.  If truth be told, the over talkative early portion of the film is the least effective, as these men have little of interest to say, sounding very clichéd, but as their ranks grow thinner, the film takes on a more wordless existential quality which is a huge improvement, growing grimmer and bleaker by the minute.  The futility of their efforts begins to resemble André de Toth’s DAY OF THE OUTLAW (1959), where Robert Ryan leads a group of outlaws through a mountain pass impassable by the brutally harsh conditions of snow in winter, where one by one they start to die in the blistering cold where the wind is too ferocious to even light a fire.  These men in the Alaskan wilderness need fire to fend off the wolves and to keep from freezing to death.
One must suspend belief to accept the premise of this film, as this does not at all represent the accurate size or look of Alaskan wolves, nor their pack behavior, as if they wanted to attack them all in one flurry, there are more than enough wolves to finish them off at any time, but generally wolves do not attack humans unless provoked.  In this film, rather than attack as a pack, which is their nature, they instead send out small scouting parties as the others look on, watching, which is simply a writer’s invention.  However, in this manner, the filmmaker is able to build and sustain tension, especially when only a few men are left, as the fatal consequences loom larger.  Using terror as the threat of the unknown, the attacks are a blur of indistinct shapes and sizes, where the evidence left behind is dismally gruesome.  Flashback sequences and hallucinations help portray the deteriorating state of mind, where the men grow delirious as well as exhausted from trying to walk through the snow to safety, hoping to find a lone hunter’s cabin around the next bend. Always holding out hope, while continually pressed into greater survival mode, the men are fully tested by the ominous void of impending gloom that hangs in the air.  The conditions are never anything but unrelenting and merciless, where God is inevitably challenged to show himself, as otherwise all is lost.  In the end, each man must face his own interior demons as he’s about to be engulfed by the unyielding indifference of the wild, as this barren landscape has withstood eons of insufferable winds and cold without any sign of man’s footprint. Interestingly, there’s a final shot that comes after the end credits roll.
Posted by Robert Kennedy at 12:32 AM