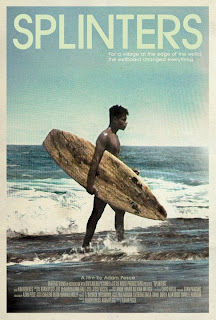 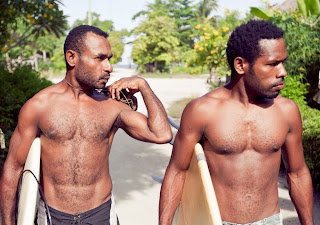 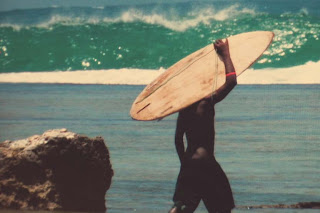 SPLINTERS                B-
USA  (94 mi)  2011  d:  Adam Pesce               Official site
One may have to do a Google search to find out where Papua New Guinea is on the globe, and it turns out to be a neighboring island just north of Australia, connected to the long strip of Indonesian Islands.  With nothing more than having seen a photo of a young boy holding a surf board cut out of local wood called a splinter in Papua New Guinea, first time filmmaker Adam Pesce, a surfer himself who was studying diplomacy and world affairs along with documentary filmmaking part-time, decided to leave the comforts of Southern California and take a look for himself, ending up in the seaside village of Lido.  Apparently twenty years ago, there wasn’t even a road, but an adventurous Australian pilot left a surfboard behind after teaching some of the locals how to surf, creating something of a cultural explosion of interest, particularly among the male population.  With over 80 % of the population unemployed, this at least gave them a pastime, where one mentioned that after catching waves all afternoon he wouldn’t feel like working anyway.  In this film, nearly entirely shot in this remote rural community, located on the northwestern coast, close to Vanimo, known for its spectacular waves approximately 45 minutes from the border with Indonesia, there is scant evidence of anyone working at all.  Instead there are custom built grass-roofed huts and coconut trees along the beach for as far as the eye can see.  But there are two surfing clubs, Vanimo and the Sunset Surf Club, where their town would host the initial Papua New Guinea national surfing title in 2007, where the top 3 finalists in each category would win a trip to Australia for exposure to more competitions.  With no conceivable way to ever earn that kind of money, as one-third of the entire nation lives on less than $1.25 per day, probably less in this remote area, this creates a fierce competition to gain a spot on the team.
Pesce introduces us to a number of the contestants, many of whom are related, and in the process the surfing story becomes almost secondary, as the viewer is instead immersed in this isolated region of the world where few people have ever been.  This becomes the fascinating focal point of the film, where the film raises many more questions than it answers, as it instead simply watches and observes, where one of the local surfers brutalizes his wife in front of the entire community, continually throwing things at her and kicking her, where no one intervenes and we never truly find out what led to this outrageous display.  Afterwards the woman simply explains how sad it is that women don’t stand up for each other, that men are allowed to simply walk all over them.  Later we learn that few of these individuals ever went to school, that there’s no running water or electricity, so with no conceivable jobs, there’s little opportunity for advancement or improvement.  Still one can’t help but gaze at the gorgeous images of surfers in the water, where several of the guys compete for bragging rights about who’s the best on the island, especially the younger Ezekiel and the reigning champ Angelus, while two sisters, Leslie and Susan apparently are the two female hopefuls to go to Australia.  The two surfing clubs are closely familiar with each other, where there’s still plenty of leftover animosity from a rift nearly a decade ago when Angelus felt he was cheated out of an opportunity at Vanimo, where they gypped him out of a contract to compete in Australia by failing to fill out some paperwork, which led to he and Ezekiel forming a rival club.
The filmmaker moves back and forth in time, as we see the arrival of cars and trucks and crowds lining the beach for the competition, but also a prelude to these events, where there are shattering circumstances seen months ahead of time that defy explanation.  Ezekiel, for instance, is a young inarticulate teenager who hangs every night with a group of kids drinking excessively, where they literally hassle and stop cars on the highway at night for kicks, often throwing rocks at them if they don’t stop.  This is not how normal athletes prepare for such impactful competitions.  When one of the leading regional surfers arrives to move things along for the big event, making sure the town makes all the needed preparations, what he discovers is utter chaos.  First, no one has moved a muscle, nothing at all has been built, as judges need a higher vantage point to view the surfers, and the men are stealing all the boards meant for the women, as they’re supposed to be split half and half.  Even more appalling, when urged to include women equally, they insist upon following their local custom which gives only men a say.  Currently, for instance, men are allowed to buy Vanimo women and make them their brides.  Despite Western intervention, it’s never clear what happens, only that they reached a brick wall of resistance when it comes to highlighting regional authenticity in hopes of drawing an international surfing audience.  While the director captures the natural flow of events both on land and at sea, he offers surprisingly little footage of the championship event itself, though what is shown is captivating.  Nonetheless, in the end, it does come down to winners and losers, where in something of a surprise, the island itself once again intervenes and adds its own cultural flavor to what constitutes winning and losing.  While the filmmaker takes a balanced view throughout, too much remains unresolved and unanswered, where the beauty of the idyllic sport never transcends the backward nature of their ordinary lives, which continually seems caught in a modern day quagmire.
Posted by Robert Kennedy at 1:24 AM