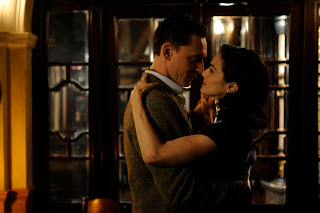 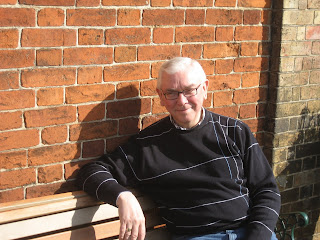 THE DEEP BLUE SEA           B+
Great Britain  USA (98 mi)  2012  d:  Terence Davies
One thing you can count on with a Terence Davies film is intelligence and impeccable taste, also a nostalgia-tinged glimpse of the face of Britain lying in ruins, still recovering from World War II.  According to Davies who was present for the screening, it took until the reign of Prime Minister Tony Blair (1997 – 2007) to pay off the reconstruction post-war debt to the United States, so part of the character of the country is defined by the arduous challenge to rebuild their lives.  This task of the entire nation is given a parallel story of rebuilding one’s life from the broken dreams and failed promises of love and marriage.  Set in the early 50’s, the film is adapted from a 1952 play by Terence Rattigan, who typically writes about the upper class, while the director comes from a working class background, though both show a sympathetic understanding of women, especially the social restrictions that seem to confine them to a cage-like existence, where the idea of fleeing from the restrictive suffocation of a perfectly respectable marriage is the liberating theme of the film, seen as an act of bravery and foolishness in the same measure.
The audience gets a heavy dose of what to expect in the wordless opening sequence of the film, prefaced by a brief narration, a failed suicide attempt by Hester (Rachel Weisz), who closes the windows, seals the door, and turns the gas on in her rented apartment before being discovered by the landlady.  Within the sequence itself, various flashbacks occur that alter the sense of time, as Davies slowly blends together the present with the past, adding bits and pieces of her stifling marriage with an older judge, William (Simon Russell Beale), who still lives with his insufferable mother (Barbara Jefford) on the grounds of their large estate.  The erudite and polite conversation over tea laced with bitter and acrimonious undercurrents may remind viewers what a beautiful thing well written dialog can be, as the scene is seething with unexpressed emotion that all but consumes every last breath of air.  Within minutes, Hester is confessing she’s been secretly concealing an affair, announcing her marriage is all but over, running into the arms of an RAF pilot Freddie Page (Tom Hiddleston).
While Freddie is tall and handsome, a bit of a smart aleck, boastful of his days protecting the nation from ruin, he’s also not the sort to remember important relationship details.  So while it may be easy to love the guy, he’s too in love with himself, playing golf, drinking with his mates, and his devil may care nonchalance to even remember what really matters, like all that Hester has given up to be with him.  Hester’s love is more than infatuation, but it’s a dramatic idealization, a kind of hopeful perfection that doesn’t exist, where despite giving her all in a passionate approach to fulfilling each other’s true desires, where sex, love, and intimacy are all intertwined, it still sends her into the depths of despair, reeling from his personal indifference, the discovery of how little she actually matters in his life.  Hester is a brilliant woman, the intellectual equal to any man, including her husband and his overbearing mother, where Freddie continually avoids having to listen to her, knowing he can’t answer her reasoning.  Scribbling a suicide note read in the opening, true to her own dizzying passion, her suicide attempt reflects her sense of futility both in herself and her failed ideals.  But she is rescued, and then has to face those who drove her to such anguish.
Most of this entire film is shot indoors, in darkened rooms, crowded bars, entrance hallways, down long corridors, or in barely lit rooms of an old house, where the chintz wallpaper and old photographs hanging on the wall define a now forgotten time.  Shot on 35 mm by Florian Hoffmeister, the dimly lit lamps in each room have a luminous beauty creating a dramatically rich interior detail.  What’s perhaps most captivating about the film is the exquisite use of music, and how reflective it is of her character, including Samuel Barber’s Violin Concerto, Andante movement, Barber, Samuel violinc. mvt2 Andante on YouTube (9:06), played by Hillary Hahn, with its lyrical yearning and almost pleading sense of urgency.  Other songs offer a unique sense of British character, such as Jo Stafford - You Belong To Me (1952) - YouTube from 1952 (3:03), where the patrons in a crowded pub sing along in unison, leading to a dance sequence with Hester and Freddie off on their own, seemingly under the spell of romance.  Perhaps the shot of the film is an underground subway station, used as bomb shelters during the war, where citizens gathered to wait out the bombings overhead, which persisted for 72 consecutive nights, where a lone tenor voice leads the hushed and downbeat citizens in a sad rendition of “Molly Malone The Dubliners - Molly Malone YouTube (2:58).  These songs are at the core of the film, giving voice to the inexpressible emotions of the times, which was an era of rationing and shared sacrifice, where mothers, and women in particular, had to make do with so little, where the simple idea of wanting more out of life was too radical and far too out of character with the rest of the nation’s burdensome need to carry on, beautifully capturing a key period in British life.
Posted by Robert Kennedy at 1:58 AM