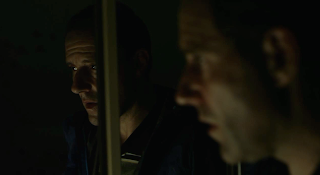 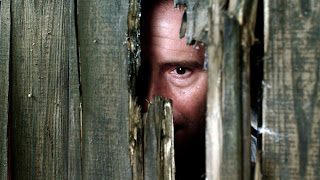 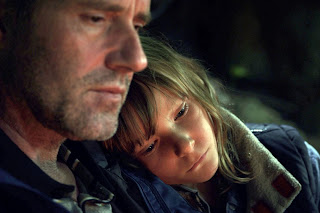 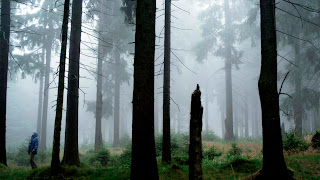 While Christoph Hochhäusler is an established German filmmaker, it may be his writing about contemporary German cinema as co-editor and publisher of his film magazine Revolver that has brought him to international acclaim, as it was here that The Dreileben Trilogy took form, where Hochhäusler publicly challenged fellow Berlin School filmmakers Christian Petzold and Dominik Graf to express their thoughts about a lack of genre films as well as the changing German aesthetic emerging from the mid 90’s that has taken a distinct interest in German locations while also examining political and/or cultural ramifications.  It’s only fitting then that Hochhäusler provide the concluding episode (shot in digital) and the segment that is most genre driven.  Dreileben is a small town in the German countryside engulfed by nature, where the enormous surrounding woods have a way of culturally isolating the inhabitants, creating an almost fairy tale and mythic illusion, which are frequently referenced through the Grimm Brother’s Hansel and Gretel, explored in the initial episode, but also Wagner’s Ring cycle, Der Ring des Nibelungen, loosely based on characters from Norse mythology where giants and dwarves thrive in the darkness of the Thuringia woods, often finding themselves at odds with one another.  It is here the focus has finally shifted from a peripheral role to the featured attraction, as the concluding episode is largely seen through the eyes of a mentally disturbed escaped killer, Frank Molesch, played by Stefan Kurt in a simply extraordinary mix of innocence and deranged confusion.  Molesch seeks refuge in the forest and spends most of the film roaming aimlessly through the woods, but Hochhäusler also retraces how easily he initially escaped from the hospital, as the police allowed him to visit his dead mother in the Dead Room at the hospital, but only guarded one of the two exit doors. The concluding episode, like Kieslowski’s RED (1994) in his Three Color Trilogy, has the most connecting links to previous episodes, and although each claims to be an independent, stand alone film, it helps if one is familiar with the earlier references, as the finale sheds new light on everything that has come before.

The finale also introduces us to a new character, the chain-smoking Marcus Kreil (Eberhard Mirchberg), a Columbo-like seasoned police inspector who is on medical leave, but can’t stay away from tinkering with the case, as the town is under siege from strange attacks and unresolved murders, where the audience is treated to gruesome forensic photos of the deceased.  While we get a taste of his family life, where his overbearing wife berates him for not staying in bed and his dim, constantly demanding son wants his approval for another hair-brained business proposition, hoping his dad can interest the police department into using his exercise equipment that is otherwise sitting dormant in an empty gym collecting dust.  Marcus is often seen alone scrutinizing the video security tapes of the hospital, including the evidence used to convict the killer, the last man to see the girl alive, where the title is based on the tape going blank just prior to a young girl’s murder, leaving lingering, unanswered questions, where he is hoping to discover new clues, but he’s also interested in changing the focus of the investigation, trying to fathom why Molesch would go on a murder spree, trying to understand how he thinks, where he often visits Molesch’s mother’s vacant home in the middle of the night hoping to pick up new information, where the constantly wandering Molesch is also seen hovering nearby.  In fact, the latest police strategy is to form tightly connected search lines combing through the woods, where Molesch can frequently be seen just out of reach desperately trying to escape, reminiscent of Peter Lorre’s frantic attempts to escape the police manhunt in Fritz Lang’s M (1931).  When he’s flushed out of the forest, he often meanders into various pieces of the preceding episode, where despite a sighting, his detection was appropriately misidentified, a clue to the filmmaker’s goal of challenging the audience’s expectations.

This finale has a rhapsodic approach when the convict is free to roam through the countryside, feasting on wild berries, talking to himself, his mind often wandering to thoughts of his dead mother, where instead of a vicious monster of the loose, Molesch seems more like a simpleton, a manchild who has been tossed out into the world, frightened and alone, where his mood shifts and nervous body language are often inexplicable.  Perhaps the highlight of the film is a sequence in the woods where Molesch has amusingly stolen sandwiches from a picnic table of visiting tourists enjoying the hillside view of the town nestled in the valley below, where he retreats into the woods to first identify and label the contents of each sandwich before gobbling them down, when he is unexpectedly interrupted by a young girl (Paraschiva Dragus) hanging from a tree limb above who is also hungry.  She immediately trusts and protects him, warning him where the police are, quickly escorting him to safety, developing a tender bond between the two where they sit by an evening fire as he sings a silly song in a beautifully realized tribute to FRANKENSTEIN (1931).  The dual narrative tracks of the finale center upon exposing the heart of each character, the cautiously circumspective police inspector and the gentle giant, often maligned monster in the woods, where at one point the police dragnet forces his retreat into the hidden confines of a cave, which turns out to be a historical witch’s cauldron, where he has to hide from another tourist group as they listen to legendary tales of witch burnings and witches capturing unsuspecting hikers.  Still in the cave when the evening fog rolls in, Molesch can be seen trying to squirm under the enveloping layer quickly filling the empty spaces, obviously threatened by a fear of the unknown.  This all too human quality, ironically from a monster regarded as a deranged serial killer, described by Hochhäusler as “a man who became a murderer only because he was hounded,” becomes a major theme of the film, how easily we jump to the wrong conclusions, as if anything, this Trilogy suggests humans are continually prone to making mistakes.
Posted by Robert Kennedy at 3:32 PM