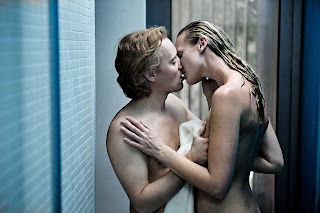 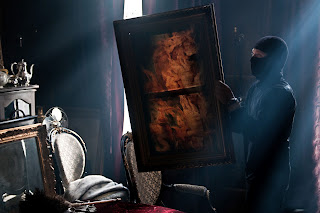 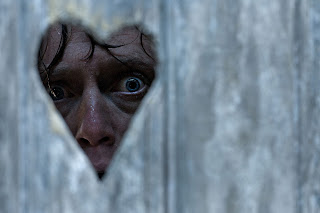 Another Scandinavian thriller, following the success of the 3-movie Dragon Tattoo adaptations of the highly popular Stieg Larsson Swedish Millennium Trilogy, all released in 2009, which raised heads in America for its contemporary slant on investigative journalism, a smart crime drama creating such vividly memorable lead characters, introducing the punkish computer hacker Lisbeth Salander with a near photographic memory, initially played by Noomi Rapace, but also Michael Nyqkvist playing the award winning journalist, where the unique interest in their personal interplay was at least as interesting as the historical backdrop of murders and atrocities they were exploring.  The Nordic crime fiction phenomenon has been gathering plenty of momentum over the last decade or so with a steadily increasing proportion of books from Scandinavia and Iceland.  Now that Larsson has passed away, Norwegian Jo Nesbø is being touted as the next big thing, where this film adaptation has the feel of filling a void in the marketplace, with Millennium's Swedish producer Yellow Bird also handling this production, where much of it rivals the cool veneer of murder mysteries behind the Iron Curtain, but HEADHUNTERS is a Norwegian take on the crime thriller, a slick, stylish, high octane screen version that may take a page out of Danish director Nicolas Winding Refn’s recent film Drive (2011), which is a highly entertaining mixture of commercial and art motif.  The past few years have featured several excellent Norwegian films, from the dark absurdity of Jens Lien’s THE BOTHERSOME MAN (2006), the amusing crime genre of Hans Petter Moland’s A SOMEWHAT GENTLE MAN (2010), Joachim Trier’s impressionistic portrait of blossoming and then fading youth in Reprise (2006), also his devastating portrait of existential anguish in Oslo, August 31 (2011), to a hilariously offbeat teen comedy of Jannicke Systad Jacobsen’s Turn Me On, Dammit! (Få meg på, for faen).  Those are all better films than this one, but one feature they all have in common is a core of excellent ensemble actors, many of whom are complete unknowns in America.

Straightaway, a narrator offers a few acerbic and supposedly enlightened comments, where the subject is money and how it takes lots of it to maintain the girl of his dreams, living in a fabulously upscale Architecture Digest style modern home with glass windows all around.  The narrator is a diminutive Askel Hennie as Roger Brown, attempting to shed light on how he maintains his sanity, perhaps overcompensating for his lack of size, pretending to be a corporate headhunter in order to lead the life of luxury to which he’s accustomed, happily married to a gorgeous woman, a leggy blond ice princess, Diana (Synnøve Macody Lund), where he keeps his real profession a secret, as he’s a professional art thief.  Immediately Alfred Hitchcock’s TO CATCH A THIEF (1955) with Cary Grant and Grace Kelly comes to mind, where Roger even dons a similar all-black attire when he becomes a cat burglar, breaking into heavily guarded premises and exchanging indistinguishable looking facsimiles for original works of art, where the owners never even realize anything’s been stolen.  No sooner does the audience meet this fabulously rich and wealthy couple, who have a bit of a marital tiff, but Roger flies out the door in a hastily arranged meeting with his partner, having overheard his wife, the owner of a successful art gallery, mention the whereabouts of an original Rubens painting worth perhaps $100 million dollars that was supposedly stolen during the war.  Like catnip to a cat, Roger is immediately on the prowl, but his partner Ove (Eivind Sander), the crack security specialist with a weakness for guns and Russian prostitutes, can’t peel his eyes away from the tantalizingly voluptuous Natasha (Valentina Alexeeva), not even for an instant, and has to be dragged into the caper.  The contrast between the two women, both seemingly bought and paid for, is not lost on the viewer, though they each seem to come from opposite social classes.  Tying everything together, so to speak, is the owner of the painting, a ruggedly handsome Clas Greve (Nikolaj Coster-Waldau, yes – that’s Dutch), a former special ops mercenary soldier whose specialty is tracking people down, whose suave and sophisticated manner makes him an ideal candidate to fill an open CEO position at Roger’s company, Pathfinder, an international firm that specializes in cutting edge GPS technology.

Complicating matters even further, Roger is having an affair with Lotte (Julie Ølgaard), which he cuts off, realizing the havoc it could play on his now hanging by a thread marriage, and when he steals the painting, which supposedly goes off without a hitch, he discovers his wife’s phone in the bedroom, suggesting his wife is having an affair of her own.  Putting the clamps down on Greve’s ascension to head corporate honcho changes the playing field, as from this point on Roger the corporate headhunter suddenly finds himself alone and among the hunted, where Clas, the professional tracker, is perpetually on his tail.  Both are idealized representations of corporate masculinity, the kind of guys that always make the other guys sweat while they walk away holding all the power and a suitcase filled with money.  Roger’s pecking order in his overly controlled world is under constant threat, where seemingly nonstop action sends him spiralling into the depths of one disaster after another, where suddenly it’s his life that hangs on a thread, continually squirming out of near death experiences.  There are casualties along the way that he is being blamed for, as two can play this secret con game of falsifying evidence, sending him on a nightmarish journey with seemingly no one left that he can trust, as literally everyone’s been somehow tainted by Clas in this subterfuge operation, leaving him no way out.  The thrills and spills border on the ludicrous at times, but the sadistic joy with which this director apparently relishes shattering the illusion of a James Bond style competency, continually dispatching his protagonist to undergo a succession of the most extreme and awkwardly humiliating circumstances, where everything that can go wrong does go wrong, taking a slightly demented, almost Coen Brothers tone of sarcastic delight in his misery.  Conceiving this as a black comedy is perhaps the cleverest trick of the film, adding an underlying stylistic dimension of villainy even in the protagonist himself, where it’s not such an easy to understand black and white world, as we’re led to believe in advertising, but a ruthlessly hypocritical and amoral corporate con game of presenting a smooth surface in order to conceal the savage treachery going on underneath.  Tyldum chooses to delve under the surface at interior motives that have existed all along, but were all too quickly overlooked during the frantic pace of the action.  This doesn’t have the historical depth or the richness of character of the Millennium Trilogy, but is instead something of a breezy, lightweight entertainment vehicle designed to give the audience a highly charged thrill ride.
Posted by Robert Kennedy at 10:03 AM