Where Do We Go Now? (Et maintenant on va où?) 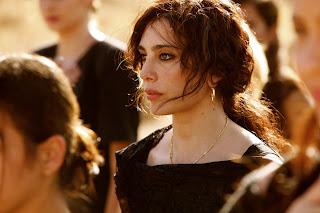 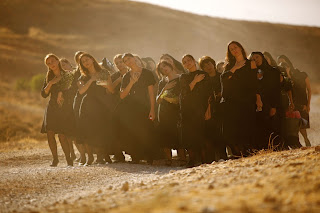 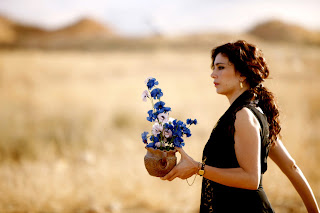 WHERE DO WE GO NOW? (Et maintenant on va où?)          C
France  Lebanon  Italy  Egypt  (100 mi)  2011  ‘Scope  d:  Nadine Labaki
While this is a joint cultural exchange project, a feel good mix of East meets West, it’s largely a Lebanese version of MAMMA MIA! (2008), but with bouncy Lebanese music instead of ABBA, much like this:  Hashishit Albe Song's Clip –  YouTube (1:21).  The film attempts to make light of the stark historical rift between Lebanese Christians and Muslims, leaving out the root of the problem that was most exacerbated when Lebanese Christian militias committed massacres and other atrocities against Palestinian refugee camps in a long protracted Civil War between 1975 – 1990 that resulted in a quarter of a million fatalities, another million wounded in a country of only 4 million people, where there was a mass exodus of nearly one million people.  This film attempts to patch over the differences with humor and song, largely seen as a female empowerment fantasy, supposedly a feel good movie where they attempt to trick the men in order to stop the continual animosity between the two sides.  Unfortunately, the breezy, lighthearted vein makes everyone look stupid, especially the men, who are relentlessly browbeaten by the women, mocking the whole idea of cultural differences through a make believe battle of the sexes farce.  What it lacks is any subversive political element, so prevalent in the films of Elia Suleiman, whose Palestinian and Israeli border farce DIVINE INTERVENTION (2002) is drop dead hilarious, while The Time That Remains (2009) reflects a more autobiographical view on the insufferable losses that have mounted in the past half century, where chronic fatigue syndrome doesn’t begin to describe it.  Labaki, who co-writes and stars in the film, shoots at a gorgeous mountainside location where the fictitious Lebanese town is evenly divided between Christians and Muslims, yet despite the religious differences and occasional arguments that break out into fights, the women and children all seem to get along, where the hope is that when these children grow up they will as well.
One prevailing theme anywhere in the Arab world is the communal funeral processions, where all dressed in black, friends, family, and neighbors share in the burial and mourning process.  Labaki uses an opening music video effect as all-female mourners walk in a choreographed manner set to music, where they all move in unison, suggesting their common bond.  Despite their overbearing demeanor to keep their men in line, on their own, petty disputes between the men lead to a neverending cycle of escalated altercations, where friends quickly turn to foes, usually separated by their wives who have to keep the peace.  In the manner of many Arabic films, Youssef Chahine for instance, especially CAIRO STATION (1958) or DESTINY (1997), it is not uncommon for films to break out into a musical number right in the heart of the dramatic action, but while Chahine’s choreography rival Bollywood, often providing the manic energy for the storyline, Labaki’s are utterly lackluster, using songs without dance numbers, instead attempting to incorporate the music as an element of the storyline, like the thoughts of the characters.  In this manner, Labaki loses an opportunity to enhance her films with more depth, but instead keeps it airy and superficially lightheaded, where characters often yell hysterically at one another in an over-the-top, melodramatic manner.  Labaki herself stars as one of the central characters, and is probably onscreen as much as anyone else, yet none of the characters stand out or are ever really developed, which is one of the central problems of the film.  If all the characters are forgettable, then so is the film, as this kind of film experience has no weight or sustenance and is instantly forgettable.  Supposedly the People’s Choice winner at the Toronto Film Festival in 2011, it’s hard to fathom film-wise, though the film certainly meets the thematic brotherhood (or sisterhood) of man criteria.
While many may love the premise of the central scene, where the women of the town conspire to literally drug and trick the men, concocting a secret formula in their food while bringing in a horribly out of place group of bored Ukrainian strippers (aka:  belly dancers) to aid them in their scheme, this is supposedly the climactic high point of the film, yet it never materializes, as it doesn’t go far enough in the satirical exaggeration, where the food bit barely registers, perhaps afraid to offend censors, and the film shows little choreographic or dramatic involvement in the undeveloped dance sequences.  So the director really mishandles her opportunity here, as she spends almost half the film setting up this sequence with the wayward Ukrainian girls, but rather than use them as a feature attraction, their sequence actually becomes a set-up for yet another plot device.  So it’s a bit confusing that the most melodic musical number in the film, written and composed by none other than the director’s husband, Khaled Mouzanar, heard when all of the women in town happily conspire against the men, leads to a crescendo that gets undermined and lost as a lead-in to something else.  The song itself is wonderful, but the way it’s eventually used is unfortunately anticlimactic.  Many may just be happy with the air of blissful ignorance that is so prevalent throughout this film, where character development or lack of dramatic tension may be the least of their concerns.  It delights in showing empowered Muslim women, a group in real life routinely denied basic rights, taking matters into their own hands by resorting to deception of their husbands in an attempt to stabilize the region.  If only life were this simple—where in this film, women routinely perform fake religious miracles.  Perhaps because of the preposterous nature of the movie itself, the entire film is framed by a narrator as a bedtime story.
Posted by Robert Kennedy at 9:33 AM