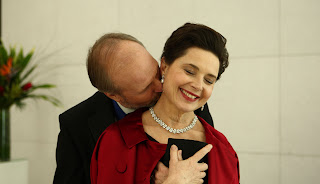 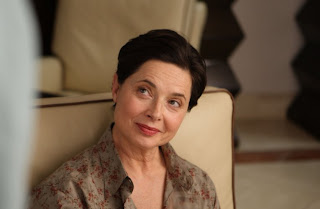 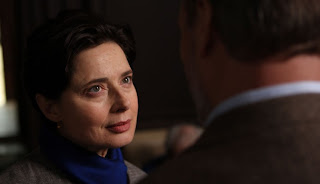 LATE BLOOMERS                            B
France  Belgium  Great Britain  (95 mi)  2011  d:  Julie Gavras
A bit of a surprise that this film flew under the radar, that it was not embraced by the senior film going population, who instead chose to see the nostalgia-tinged, reflection of colonialism in India as the good old days in John Maddin’s British ageist, feel good comedy THE BEST EXOTIC MARIGOLD HOTEL (2011), which features a host of elderly British acting royalty, letting them play eccentric and cranky old people looking for that last adventure in life.  LATE BLOOMERS, on the other hand, has its comical moments, but is a low key attempt at embellishing the aging process with a bit more grace and realism, showcasing the superb acting talent of Isabella Rossellini and William Hurt as Mary and Adam, a couple married for 30 years, who now that they’re free from raising their three grown children and are finally on their own, they go through a bit of a rough patch. Rossellini is simply adorable here, right from the start when she speaks Italian so gorgeously with her mother, reminiscent of her own mother Ingrid Bergman, who was roughly the same age as Rossellini when she made the film AUTUMN SONATA (1978), both films about attractive women who must come to terms with aging.  Co-written by the director, the daughter of Greek director Constantin Costa-Gavras, best known for politically laced thrillers, this has a distinctively gentle touch about it as it lovingly embraces the two leads, trusting that they are authentic and brilliant enough to pull this off, which they do with panache.  Opening with Adam winning a prestigious architectural award, one that casts light on the totality of his career, as if he’s being given the gold watch of retirement, which is based on similar late career accolades lauded upon the director’s father, which were emotionally harrowing and always viewed by the family as premature obituaries.

However the tone here is comic, accompanied by a thumping Greek brass band, where the couple good-naturedly kids one another about their approaching demise, especially when someone supposedly pays a compliment to Adam, “Your husband’s a dying breed—they just don’t make buildings like his anymore.”  Naked and in each others arms the next morning, Mary can’t remember how she got there, where a fleeting memory loss sends her in a panic to the doctor, thinking early signs of Alzheimer’s Disease have set in, but not to worry, she’s in excellent health, where for mental alertness, now in retirement from a career in teaching, she needs to find an activity and start exercising regularly.  When she shows up at a water aerobics class, she is easily the oldest one there, and when the rapid pace of the music quickly passes her by, she mostly just splashes around in the water in a state of total confusion.  Late on arrival another day, she watches the synchronized movements and just turns around and walks out, not really motivated to join in.  This outsider status is something “imposed” by society, where people treat you differently based on age, and Mary is disappointed to see men look at her differently, or more to the point, they don’t look at all, which she finds unnerving, as if her sexuality has been compromised.  She suddenly reaches the conclusion that now they are in their 60’s they are old and need to make drastic adjustments in their lifestyle, outfitting their house with senior friendly gadgetry, from safety bars in the bathtub, a remote controlled hospital styled mattress that reclines up and down, and a giant button telephone, likely things they don’t need yet, but she loves irritating him when he simply doesn’t want to be bothered thinking about growing old.
Adam, on the other hand, is still working for a London architectural firm that prides itself on unpopular projects, so when his boss, the brilliant Shakespearean actor Simon Callow, sleazily pitches a new commercial design for a retirement home, claiming the business is booming, so they better get in on it, Adam is plainly not interested, not even after Mary organizes a Gray Panther meeting in their living room where the seniors are excited at the thought of architecturally designed retirement homes, ones so attractive they will make “younger people look forward to getting old.” Instead Adam recruits a group of junior architects that express an interest in entering a major competition to design a new museum.  Working late night hours, going out drinking with his much younger colleagues, one of whom may have her eye on him, Maya (Arta Dobroshi), spending all his time at the office, now wearing a leather jacket and jeans, he all but avoids Mary’s amusingly adapted home for the old and senile.  This cat and mouse game between the all-too familiar married couple now living apart plays havoc on their children, where they plot and scheme to keep them together, where at a disco party at a new art installation, the two of them have a way of carrying on a conversation across a crowded room through hastily invented sign language.  Despite the seriousness of the subject matter, Gavras has written what feels like an intelligent  play filled with intimate moments, one sequence succeeding the next, driven by an affectionate, light-hearted tone, where Rossellini especially is simply superb, embracing every moment with that warm and endearing smile to Hurt’s more gruff and grouchy character, but underlying it all is a light romantic touch, where it would be hard to find two people today do it any better.
Posted by Robert Kennedy at 8:50 AM