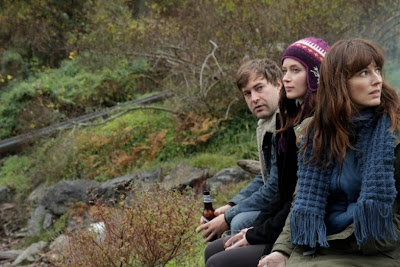 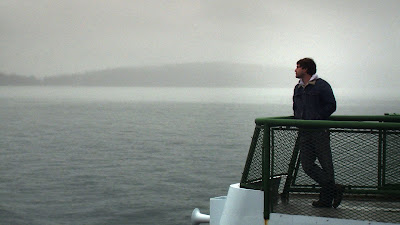 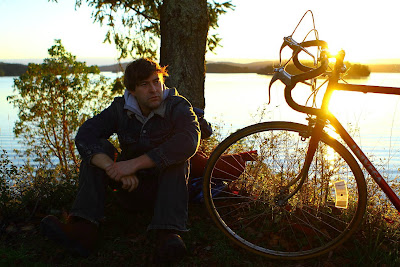 Think of this as a Mumblecore version of ON GOLDEN POND (1981), where younger twenty-somethings seek out the remote tranquility of the Pacific Northwest region to work out their personal issues, while the most prominent feature of the film is the exquisite use of locations in Seattle’s Puget Sound region, especially the isolation of the nearby islands which is beautifully photographed by Benjamin Kasulke.  Shot very quickly over the course of 12 days, the film is extremely well directed, as the carefully composed shots couldn’t be more intimate, where the changing focus between the three main characters is kept in fluid motion, where the camera is always at the center of attention.  The film is almost completely improvised, where what one hopes for is a certain artistic freshness, a feeling of naturalness and authenticity, which to its credit is certainly there, but the downside is the characters continue to talk in circular motion, continually repeating the same themes, never really getting under the surface of any of the characters.  Often it’s painful to listen to the characters struggle for some semblance of having something important to say, where more often than not they never really find it.  Unlike the Mike Leigh improvisational method, this story does not evolve out of rehearsals, where characters are already comfortable in their skin, instead all remain skittishly uncomfortable, where the main storyline is imposed upon them rather than developed from them.  In this case, it makes all the difference in the world, as the basic outline of the overall narrative structure remains in place, where the characters simply attempt to navigate their way through the emotional issues.

Mark Duplass from Safety Not Guaranteed (2012) and Shelton’s earlier HUMPDAY (2009) is Jack, the perennial unemployed drifter who remains dissatisfied with the emptiness and moral vacuum of whatever hand he’s dealt, yet who finds others equally as pathetic, even as they tout their successes.  Emily Blunt is Iris, his best friend, never better than in Pawel Pawlikowski’s MY SUMMER OF LOVE (2004), but her European accent and manner feel woefully out of place here, where she ruins the chemistry in nearly every scene, often in the way she uncomfortably needs to be the center of attention, where she obviously needs to work out her own issues, as she couldn’t be more of a sourpuss, draining whatever life or energy is in the air.  Rosemarie DeWitt, from Jonathan Demme’s RACHEL GETTING MARRIED (2008), is the revelation as Iris’s sister Hannah, a last minute fill-in for Rachel Weisz who was forced to drop out due to scheduling delays and ends up being the most appealingly honest of the three characters.  The story begins with an all too familiar example of theater of discomfort, where a small gathering meets to celebrate the one-year anniversary of the death of Jack’s brother, where after the typical laudatory words, Jack’s had enough and sets the record straight, sending a chilling silence through the room.  Iris thinks the best thing he needs is some space to clear his head and recommends her family’s lakeside cabin on a nearby island, just a bike ride and ferry boat crossing away.  The idyllic, heavily forested island location couldn’t be more picture perfect, including the glass widows overlooking the lake, where the musical score by Vince Smith elegantly underscores the captivating beauty, but Jack’s arrival in the middle of the night is more than a little awkward, as someone’s already there.  It turns out to be Hannah, where both appear to be more pissed off than annoyed at the unexpected arrival of someone else, as each seemed to be looking forward to a little soul searching in the solitude of the moment.

Nonetheless, Hannah’s outspoken nature is immediately appealing, where she’s made some major, life-altering decisions of late, yet she doesn’t wallow in her misfortunes and whine and bitch, like Iris, instead she brings out a bottle of tequila and starts downing shots.  She and Jack are instant chemistry, where alcohol and inappropriate sex make perfect sense to these characters, only to regret it in the morning when Emily arrives.  While Jack is for hiding the obvious, Hannah is not so sure, as keeping secrets from sisters is usually not advisable.  The different accents between sisters needs to be narratively explained, as Blunt’s British accent as well as her overly needy, self-centeredness takes some getting used to, as her presence instantly changes the dynamic for the worse.  The refreshing openness of the first night spontaneity is immediately evaporated, replaced by Iris’s indulgent inclination to dramatically overact, showing no sense of humor whatsoever, taking herself so seriously, altering the previously understated, often comical balance.  By the time she finds out what happened, she mopes around in an extended pout, feeling sorry for herself, basically unable to speak, perhaps most upset that she was actually upstaged by her older sister.  Despite the casting imbalance issue and the improvisational meandering, the fluid pace never wavers, even as the characters occasionally flounder in their self-imposed misery.  The ultimate irony in these misery-loves-company movies is the stunning absence of work, where these characters have all the time in the world to live in such an idyllic natural paradise, and then have the nerve to grumble and moan about their lives, usually starting with each other.  The structure of the filming couldn’t be more solid, as each sequence progresses naturally into the next, weaving in and out of each others pitiful lives, where the stillness of the gorgeous landscape stands in stark contrast to the muddled lives of small-minded humans.
Posted by Robert Kennedy at 8:32 AM