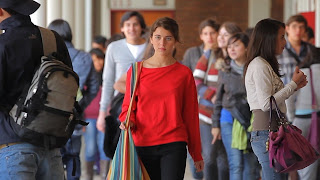 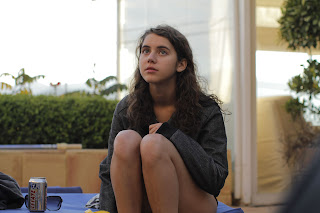 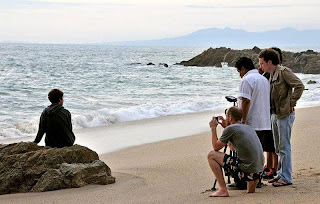 This film was a suprising winner of the Best Film from Un Certain Regard at Cannes this year, from a selection of films shown outside the main competition, where the award is given for innovative and daring works.  While the tone of the film is daring, revealing the bleak reality of how high school bullying becomes a collective, almost gang-like activity, the kind of thing almost no one would think of doing on their own, but when a new girl in school starts receiving the attention from some of the cute boys, some kids may resort to any means to embarrass and discredit the new girl’s reputation, while insecure others can’t help piling on once they realize someone’s in a lower stratosphere than they are.  Stylistically, however, using fixed camera angles and long takes, copycat minimalism is no longer daring, but a fairly common occurrence in this past decade, especially from the likes of Kiarostami, the Dardennes brothers, and New Wave Romanian films, where a bracing realism is observed without a hint of sentimentality, almost always utilizing the style for greater effect while also addressing moral issues.  Perhaps a film this most closely resembles is Juan Antonio Campos’s AFTERSCHOOL (2008), which does a much better job addressing the social complexities that exist within various social strata in high schools.

This film has a point to make, and it is what it is, but offers little more, never really questioning the underlying circumstances that lead to such horrific events, or investigating how the authorities or the victim might have handled things differently, but simply suggests a worse case scenario, like a high school from hell, where one student goes from being relatively popular to being an object of scorn and derision, where literally every conceivable student mocks and humiliates her.  This film has an aversion to character development, as if stressing the idea this isn’t about one particular person, but could be anyone, so simply fill in the blanks accordingly.  Part of the problem with that is the film is so detached that there’s no viable connection to anyone, where there’s no driving force to persuade the audience to act or give a damn.  In this movie, nearly everyone is despicable, taking Buñuel’s portrait of the wretched of the earth in LOS OLVIDADOS (1950) and extending it to the over-pampered youth of the middle class.

Showing a love for the back seat cam, a good 10% or more of the time spent in this movie is from the back seat of a moving vehicle, where you get a detached view of the backs of passenger’s heads, which is an economy of means, but we get the point without having to be so repetitive.  With little backstory, we soon understand a father (Hernán Mendoza) and his teenage daughter Alejandra (Tessa Ia) are moving from Puerto Vallarta to Mexico City following the death of the mother.  Both suffering adjustment problems, the father is a chef in a newly opening restaurant while Alejandra will be starting at a new high school, immediately revealing the difficulty of fitting in, where people who are supposedly your friends are secretly moving behind your back to embarrass you in front of the group.  Honing in on the warnings of social media, the young, in particular, are vulnerable to negative exposure, where naked pictures that end up in the wrong hands from a stupid mistake at a party can literally crucify you.  This same subject was explored by German director Christian Petzold in Beats Being Dead (Dreileben 1 - Etwas Besseres als... (2012), where a young girl’s sexual exploits in the woods with a member of a biker gang is secretly photographed on his iPhone, which she immediately throws in the lake, perhaps the right course of action for Alejandra as well.

Instead, the film delves into the psychological torment of an unprotected young girl whose photos are plastered all over the Internet, who already lost her mother, who has no protection network around her, and doesn’t feel comfortable talking to anyone about it, so her life takes a miserable descent into complete victimization, where her initial attempts to stand up to fellow student harassment are replaced with benign acceptance, where in her eyes it’s easier to get it over with than struggle and prolong the agony.  Showing this degree of vulnerability just opens the door to unlimited torture, where other students couldn’t be more sadistic, inflicting a neverending ordeal of humiliating acts, changing the tone of the film to outright horror.  While the film doesn’t flinch, never hiding the inflicted brutality she endures, one wonders why she just allows herself to continually walk right into the heart of the horrors, as she’s an otherwise intelligent girl.  The point, however, is to make her defenseless, where she literally gives in to her perpetrators, where her only defense is becoming numb to it all.  While it all leads to an equally disturbing finale that is deftly shown, it’s all quite disheartening, as it’s a grotesque and disturbing portrait of an escalating spiral of targeted violence risen to some modern level of spectator sport.

Note:  As the film did not arrive to the theater, the version seen was a 3rd rate screener copy which visually was about on par with a poor VHS copy movie.  While the gritty subject matter and dire style do not accentuate beauty in any sense, nonetheless, one hopes the poor film quality did not give rise to any negative critical comments, where one hopes they can remain objective.
Posted by Robert Kennedy at 12:18 PM