Something in the Air (Après mai) 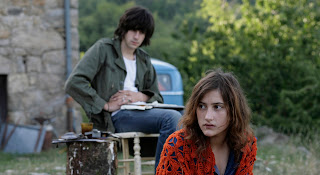 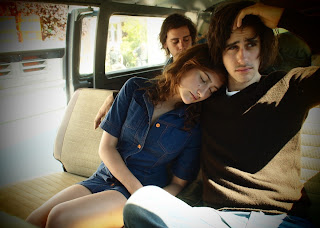 With a love a madness for Shelley
Chatterton Rimbaud
and the needy-yap of my youth
has gone from ear to ear:
I HATE OLD POETMEN!
Especially old poetmen who retract
who consult other old poetmen
who speak their youth in whispers,
saying:--I did those then
but that was then
that was then--
O I would quiet old men
say to them:--I am your friend
what you once were, thru me
you'll be again--
Then at night in the confidence of their homes
rip out their apology-tongues
and steal their poems.

This is an elegiac and largely autobiographical account of Assayas’s own youth, a companion piece to his earlier work COLD WATER (1997), arguably his best film, where both beautifully capture the mood, atmosphere, and raw, unpretentious intensity of anxiety-ridden adolescents caught up in their own indecisions, the terrible choices they do make, how easy their emotions are sparked and then extinguished, and how eloquently, beyond their own words, the films describe their fatalistic viewpoint about their all-too-hopeless future.  The French title, After May, is much more apropos, as the film is a collection of leftover remembrances after May 1968, a historical moment in French history that nearly brought revolutionary change, a combined student and worker protest that involved nearly a quarter of the entire French population over a period of two continuous weeks, initiated as a student rebellion, but eventually spreading to workers across the nation who joined the students, ultimately quelled by the forcible actions of the police who literally clubbed and beat the protesters into submission.  The film won the Best Screenplay award at Venice, opening with blistering footage of these protests, as the streets are aflame with police in riot gear with clubs literally attacking the students, with the guys wearing jackets and ties, or sweaters, but also helmets, who are seen running for their lives through the tear gas, many of them hauled off to jail APRÈS MAI [SOMETHING IN THE AIR] OLIVER ASSAYAS - clip YouTube (1:03).  There is scant evidence of rebellious long hair, jeans, sandals or beards.  The Assayas film views this period as a rite of passage, an intensely personal account of developing political idealism through a radicalization process initiated in high school, where teachers, interestingly enough, were actually teaching students about Marx, how he challenged socialists as small thinking utopians, advocating instead a complete overhaul of the economic system.  In the high school segment, various factions are still arguing many of these same theories about how to best implement a radical change.

Set in 1971, Clément Métayer as Gilles is a stand-in for the director, a somewhat moody kid who draws and paints and sells leftist newspapers on the street while getting instructions from older Trotskyites.  He and a small clan of students initiate a clandestine night raid spray painting activist political messages directly onto their school building, where the school ID of one of the activists is found on the scene, where the authorities unsuccessfully attempt to get him to name names.  Also in the clan is Gilles’ girlfriend Christine, Lola Créton (where interestingly Gilles and Christine were the names of the protagonists in COLD WATER), perhaps his best friend Alain (Felix Armand), a fellow artist, who has a visiting American girlfriend Leslie (India Menuez), the implicated student Jean-Pierre (Hugo Conzelmann), who works at his father’s socialist printing press, while Gilles is also secretly seeing another woman on the side, Laure (Carole Combes), a free spirited soul with wealthy parents who’s about to leave the country for an extended summer excursion.  Her absence brings Gilles closer to Christine, where they also travel together to Italy during the summer, where Christine hooks up with a leftist film production, Gilles visits art museums where he continues to draw and paint, while Alain studies painting with an artist in India.  While they all undergo radical interior transformations, which includes rampant drug use, art, music, travel, experimental films, more open sexual relations and frequent displays of nudity, this group filters out in various directions around the world where their radical views evolve, with each developing a unique view of what they can contribute, while continuing their education and artistic development.  Gilles remains the central character, but becomes distressed at his need for individualized artistic expression, which goes against the grain of radical Marxist sentiment which accentuates the needs of the collective by submerging individualism.

Much of this pays tribute to Bresson’s 60’s films, including the youthful impressionism of the budding painter in Four Nights of a Dreamer (Quatre nuits d'un rêveur... (1971) and the disenchantment with radical politics of The Devil, Probably (Le diable probablement) (1977).  The Grandaddy of post May 1968 films is Jean Eustache’s The Mother and the Whore (La Maman et la Putain) (1973), often viewed as the end of the French New Wave and the best expression of the end of the 1960’s hope and optimism.  Like COLD WATER, the defining scene of the film is a spectacular party sequence with music and dancing, beautifully shot by Eric Gautier, where Laure has become a drug addicted bohemian living at a palatial country estate, where bonfires are set and the musical choices are simply sublime, in perfect synch with the moment, expressing a kind of trippy psychedelia from Syd Barrett and the Soft Machine, Nick Drake, and the Incredible String Band.  Assayas integrates music into his films as well as anyone else alive, where the unspoken fluidity of this sequence speaks volumes, offering an elegiac poetry to the expression of the counterculture, which has since faded from view.  It should be noted that many of the wordless sequences from this film are among the best Assayas has ever done.  As Gilles tells his father, however, a television screenwriter (as was Assayas’s), he felt the writing on the show was “too strained.”  This aptly describes much of the forced political positions which are squeezed into this film, where there are more ideas than the film knows what to do with, where perhaps the weakest element of the film is a lack of development of the characters, none of whom, outside of Gilles, are sympathetic or really very memorable at all.  This unfortunately detracts from the overall impression of the film, which bears a similarity to Lou Ye’s SUMMER PALACE (2006), where the vitality of the youthful counterculture and freedom movements in each film are literally off the charts, expressed with dazzling camera virtuosity, where youth is like a bright flair burning in a sea of societal indifference, where once it burns out, all that’s left is the indifference.
Posted by Robert Kennedy at 12:32 PM