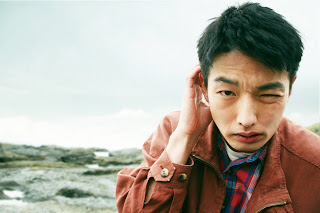 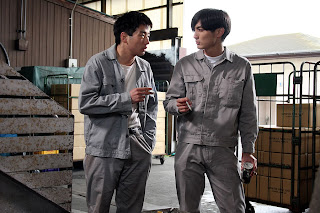 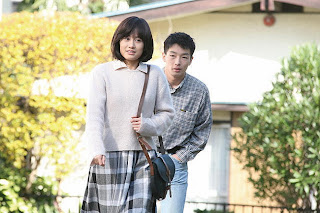 While director Yamashita is perhaps best known for his indie hit LINDA, LINDA, LINDA (2005), an upbeat teenage story about an all-girl high school band, this is about as far away from that film as you can get, perhaps reverting back to his early films which were studies in deadpan absurdity featuring fringe, loser characters who might also be called slackers.  Adapted by Shinki Imaoka, this coming-of-age story is based on the Akutagawa Prize winning novel by Kenta Nishimura, a somewhat autobiographical look at a Junior High drop out, Kanta (Mirai Moriyama), who becomes an unskilled manual laborer spending much of his spare time as a prized customer in sex for hire clubs.  While admittedly, this is a well made film, the subject matter is often gross and sensationalist, often uncomfortably so, with pee and fart jokes that may not be for everyone.  There were plenty of walkouts during the screening, with some people shaking their heads afterwards.  Part of the problem is the sympathetic portrayal of an uneducated sex fiend, the son of a convicted sex criminal forced to leave school early to support himself, who is such a maladjusted social deviant, one wonders what the original attraction is to the material?  The rhythm of life is well established, especially the dreariness of the daily work routines, where at some point Kanta meets a friend, Shoji (Kengo Koura), a student in vocational school, quickly becoming drinking buddies.  Shoji is more mannered, watches what he does or says, and remains somewhat embarrassed to go to sex clubs, but acquiesces out of friendship, while Kanta is raunchy and completely down to earth with no filter whatsoever, thinking his perverse sexual views are completely normal.

With Shoji’s assistance, Kanta meets the woman of his dreams, an extremely cute, used book store clerk Yasuko (Atsuko Maeda, from THE SUICIDE SONG (2007), who surprisingly agrees to be his friend, though they are polar opposites.  She is thoughtful and kind, expressing a gentle nature, while he’s more of a brute completely lacking in social skills, literally driving everyone away with his crude nature.  Their relationship is more a disaster waiting to happen, but initially, after a dreadful beginning, the film takes a near illusory turn, where the three of them have a swimming sequence that is a pure joy and delight, behaving like little kids.  Nonetheless, the film is grounded in the monotony of work, where Kanta is well aware of his educational shortcomings, leaving him few job opportunities and destined, apparently, to live in tiny, over priced cubicles for apartments.  When Shoji finds an intelligent and attractive girlfriend at school, his time with Kanta is more limited, who only worsens the situation by going on a thoroughly despicable drunken outburst with the couple that leaves him utterly humiliated, which only isolates him even more, which is followed by even more dreadful behavior with Yasuko.  Devastated and alone, Kanta has driven away any semblance of friendship, which becomes even more excruciatingly painful when he encounters a former childhood girlfriend as a sex worker.  The scene spiralling out of control into near farce reflects his own inner chaos, continually prone to violence, where his self-destructive streak literally defines his life.  The film is bookended by deadpan storefront sequences in front of a sex club, accompanied by a strange musical arrangement by Shinco of “I’ve Been Working on the Railroad,” which is apparently very popular in Japan as a child’s nursery rhyme, where the same melody is given different lyrics, altering the meaning of the song from the drudgery of menial labor to a journey of happiness.
Posted by Robert Kennedy at 11:28 AM