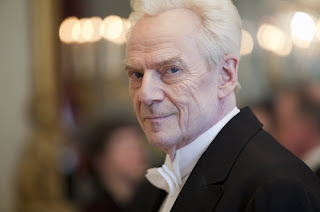 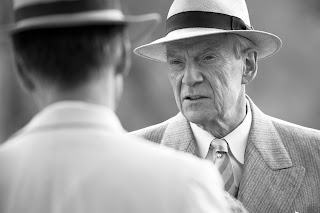 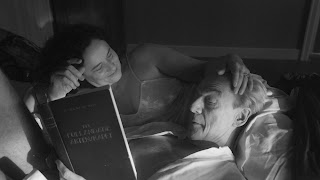 Cattle die, kinsmen die,
one day you die yourself;
I know one thing that never dies --
the dead man's reputation.

Jan Troell began his career in the early 60’s working as the cinematographer for Swedish director Bo Widerberg, both from the working class town of Malmö, where he’s always been known as an exceedingly well-prepared director, a man who thoroughly does his homework.  In the last stage of his life, he seems determined to tell historical dramas, where he’s particularly concerned with Sweden’s place in history.  In this film, Troell not only directs, but collaborates with Mischa Gavrjusiov on the black and white cinematography (the first Troell film *not* shot on film), with Ulrika Rang on the editing, and with novelist Klaus Rifbierg in adapting Kenne Fant’s 2007 biography of Torgny Segerstedt.  It’s clear that Troell wanted to exert complete creative control over every aspect of this picture, which in many ways bears an autobiographical similarity in his own life, as both discovered inspiration late in life, where they seem to be struggling against their own mortality.  Segerstedt was a religious scholar who went on to become publicist and editor-in-chief of the Gothenburg daily newspaper, drawing inspiration in his scathing exposé’s of Hitler and the Nazi’s in the 1930’s, though in this film version he’s the nation’s leading editorial columnist, literally the voice of the nation (which was officially neutral) in condemning Hitler and the threat of fascism long before the rest of the world had the nerve to do so, as no one wished to provoke Hitler into war.  Originally considering iconic Swedish actor Max von Sydow for the role, Troell chose Danish actor Jesper Christensen to play Segerstedt, the camerashop owner in EVERLASTING MOMENTS (2008), where there was some worry his accent wouldn’t be sufficiently Swedish, but apparently he alleviated all those concerns.  In the film, the newspaper publisher is Axel Forssman (Björn Granath), whose Jewish wife Maja (Pernilla August) is Segerstedt’s most ardent supporter, blatantly playing the role of his lover in front of his Norweigan wife Puste (Ulla Skoog), who is unceremoniously relegated to second class status, even in front of the family children, creating something of a scandal.  Of note, the director’s own daughter, Johanna Troell, plays Segerstedt’s devoted daughter Ingrid, who in real life became a journalist and politician, living to the age of 98, and was actually interviewed by Troell for this film before her death.

Perhaps most interestingly, Troell continually makes WILD STRAWBERRIES (1957) references throughout the film, where Segerstedt continually speaks to the ghost of his dead mother (Hanna Holmqvist), often reflecting back to some earlier memory, where making a valiant struggle against aging seems to be part of the theme, as Segerstedt was largely bored and at an impasse as a journalist until he started his attacks on Hitler, calling him “an insult,” which literally revitalized his life and gave him a purpose for living.  The film is divided into two sections, personal life and professional career, where his marriage with Puste was something of a disaster, where she put on a good public face about it but was deeply hurt.  Forssman, on the other hand, seemed resigned to the fact his wife loved Segerstedt, so willingly accepted it in every respect, especially since she continued to live with her husband, as Segerstedt (like Hitler) had a particular fondness for dogs, especially big dogs, a white bulldog, a black lab, and a Great Dane, which he kept near his side always.  Perhaps both men found it easier to express feelings towards animals than they could to the human race.  While Segerstedt is the star, a constant intellectual force, and is in nearly every frame of the movie, except for the actual newsreel footage of Nazi’s on the march, easily the most humanizing aspect of the film is Pernilla August, who is simply a revelation onscreen, an iconic presence ever since her early appearance in Bergman’s FANNY AND ALEXANDER (1982), though she cruelly uses her power at the newspaper and in high society to undermine Puste, often embarrassing her in public at every opportunity up until her untimely suicide, though she remains the love of Segerstedt’s life and his most devoted confidante until her own health fails, at which point he takes up with his secretary Estrid (Birte Heribertson).  The returned ghosts of his lost loves, like Scrooge’s ghosts of Christmas past and present, have an amusing aspect, as he’s more openly revealing to the dead than to anyone else.

Segerstedt is viewed as a man who lived by his convictions, whose moral courage in the face of the scourge of Nazism is exemplary, especially as he started lampooning the entire leadership of the top Nazi officials long before the rest of the world saw Hitler as a threat, predicting he would lead the world into a prolonged war, and one he would not live to see the end of, as he died a month before Hitler.  Segerstedt as a journalist could see what the nation’s politicians couldn’t, that silence was in fact collaboration, as they were too easily fooled or scared into complicity, fearing German reprisals, as Hitler invaded both Norway and Denmark early on, but spared Sweden largely due to the appearance of neutrality.  For this reason, both the Prime Minister and the King of Sweden attempted to suppress his columns, actually succeeding to silence him on occasion, where he would instead print a blank column, with his byline and everything else intact, but the actual words missing, a clever tactic which in its silence kept his readers informed. Segerstedt is seen as part of the aristocratic class, often seen sipping champagne at luxurious dinner affairs, where his open marital affairs seem self-serving and arrogant, showing little sensitivity to others, becoming a pain in the neck in more ways than one, where he seems a natural born irritant.  Troell is an old-fashioned film director, a contemporary of Bergman, sharing much of the religious austerity, but without the flash and the novel invention of Bergman, both of whom use many of the nation’s best theatrical actors.  The film is slow going and can grow tedious, especially with the repetitive use of many of the same classical music themes, which are meant to be leitmotifs but are simply repetitive, making this film feel longer.  Nonetheless, bringing the historical information to the foreground is always instructive and educational, suggesting many heroes may not be the best judge of companionship, but their refusal to capitulate to belligerent and bullying neighbors shows courage and astute judgment.
Posted by Robert Kennedy at 11:16 AM