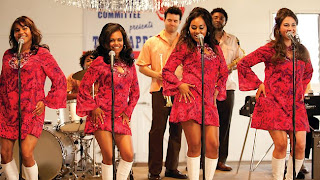 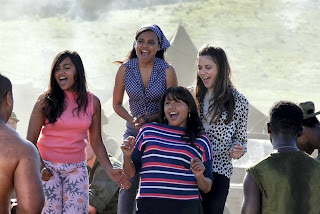 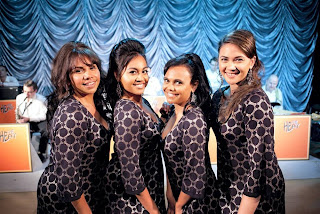 This may be the feel good movie of the year, inspired by real events, a reenactment of the lives of four Koori Aboriginal singers in Australia, based on a 2005 stage play written by Tony Briggs, the son of one of the original singers, Laurel Robinson, along with her sister Lois Peeler, and two cousins, Beverly Briggs and Naomi Mayers.  The director Wayne Blair and cinematographer Warwick Thornton, who directed the uncompromisingly bleak Samson and Delilah (2009), are both of Aboriginal descent, as is much of the cast, set in the late 60’s, an era when the State was still raiding Aboriginal villages to remove light-skinned children and raise them in a white world, an era known as “The Lost Generation.”  In the film they are all sisters coming from the Yorta Yorta community in Victoria, the oldest Gail (Deborah Mailman, the only member of the original cast), Cynthia (Miranda Tapsell), Julie (Jessica Mauboy), and Kay (Shari Sebbens), who was stolen by the government and raised as white in Melbourne.  The film actually opens with John Fogerty and Creedence Clearwater’s “Run Through the Jungle” Creedence Clearwater Revival: Run Through The Jungle - YouTube (3:07), which includes the actual sound of a Viet Cong rocket at the opening, a prelude of what’s to come.  The two oldest sisters are seen holding their own in an otherwise all-white talent contest singing Merle Haggard’s “Today I Started Loving You Again” Merle Haggard - Today I Started Lovin You Again - YouTube, where if truth be told, they are the only act that can carry a tune, which certainly catches the attention of the young, barely sober talent scout, Dave (Chris O’Dowd), who attempts to offer them a complement afterwards but gets shot down by a fierce independent streak from Gail, wanting no favors from some white Irishman who wants to take them out of country & western and introduce them to soul music.  Cynthia has seen an ad looking for talent to entertain the American GI’s in Vietnam, and with that, Dave weasels his way into becoming their manager, where the real talent is the next younger singer Julie, but her mother thinks she’s too young.  One of the other elders recalls when the four sisters all sang together, and if their audition was in Melbourne, they should look up their lost sister Kay.  With that, the journey begins.

While Dave is infatuated with Otis Redding, the girls are hesitant, preferring Charlie Pride, but after a few quick lessons on soul inspiration give Motown a whirl in their audition, Smokey Robinson & the Miracles “Who’s Lovin’ You” The Sapphires (2012) Audition [HD] - Chris O'Dowd, Deborah Mailman YouTube (2:14).  In no time, they’re whisked off to Saigon, not really sure yet of their own identity, but they’re immediately pushed onstage, sink or swim, to a room full of mostly raucous black GI’s, performing Linda Lyndell’s “What a Man” THE SAPPHIRES - clip: What a man! YouTube (2:20).  As they make their way through Vietnam, they only get stronger and more confident, where their costumes and dance routines grow more sophisticated, becoming an Aboriginal version of the Supremes.  Like a road movie, each of the girls is affected by the journey, where Gail has to give way being the lead singer to Julie, but she still bosses everyone around, where Dave calls her the Mama Bear, always looking after her cubs.  The film doesn’t duck much of the anger and resentment of the late 60’s, including the Martin Luther King assassination, which left many American cities in flames afterwards, and much of the film was shot in Vietnam, a racial conglomeration where the girls are treated like rock stars, yet the film’s greatest asset is the humorous interplay between the sisters, who continually needle each another, but also belt one another on occasion, and seethe to the racial strife that surrounds them.  While the lip-synched performances are often slightly askew, the songs are a revelation, as the girls immerse themselves in soul classics, singing to perfection the uplifting gospel sounds of Mavis Staples and the Staples Singers, The Staple Singers - I'll Take You There [Full Length Version] YouTube (4:37).  Jessica Mauboy as Julie was a former Australian Idol runner-up, actually winning the part over Casey Donovan, the youngest Idol winner ever at the age of 16, who held the role the longest in the play, and Julie’s insertion to lead singer changes the entire dynamic of the group, as her style is more pleadingly soulful, though the film is careful to also insert a few chilling renditions of Yorta Yorta songs as well.

At first the viewers might think their immediate success was without casualty or incident, as the initial focus is upon their instant rise to success, but in Vietnam the war was never far away, actually finding them on occasion, where Laurel Robinson recalls they often slept onstage, “It was so scary—one night a bomb went off, the bed fell down and the place shook.”  And while there are jolting moments where they are literally caught up in firefights, the film never loses sight of the interplay between characters, where the well-written dialogue is completely believable.  Dave’s all too humane role takes on a certain prominence, where these girls literally resurrect his life, much like he does for them.  Perhaps because he’s always forced to fight his way through the big sister protecting her flock, whose acid tongue continually sets him straight, they develop a special closeness, where the chemistry between Dowd and Mailman is magical, beautifully expressed in the reading of a letter once they get separated by an incoming hail of bullets.  The drama of the film is nicely balanced by both internal and external forces, as each of the sisters develop challenging relationships, where the immersion into a war zone leads to plenty of anxious and restless moments, but parallels Dave’s immersion into the black and Aboriginal culture, where this kind of inquisitive social exploration is a reflection of the late 60’s, an era not only of Civil Rights and social justice in America, but in Australia it’s when Aboriginals were first given the historic right to vote.  Largely joyful and uplifting, the film has a rousing power of its own through music and performance, where we learn three original members of the group now work at the Aboriginal Medical Service where Naomi Mayers has been the chief executive for 30 years, and Lois Peeler was Australia’s first Aboriginal model and is now executive director of a secondary education facility for young Aboriginal women.
Posted by Robert Kennedy at 12:17 PM