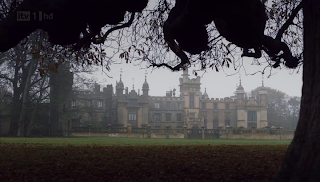 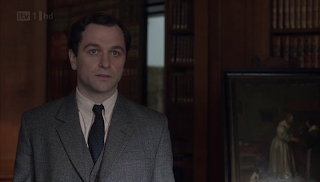 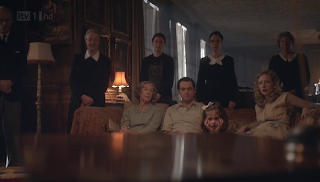 This is a small gem of a film, a British made-for-TV production that only the British can make, that is arguably a smaller yet better film than the much more heralded, Academy Award Best Picture winning THE KING’S SPEECH (2010), which is a star driven, crowd pleasing vehicle that makes all the headlines and has tens of millions of dollars to spend on wide reaching advertising, eventually grossing more than $350 million dollars.  More in line with the late Robert Altman’s GOSFORD PARK (2001), an unexpected dip into Agatha Christie territory where everyone knows his or her place and social proprieties are strictly observed, this is adapted from a 1957 Daphne du Maurier novel and a director adapted remake of the 1959 film directed by Robert Hamer, starring Alec Guinness and Bette Davis.  From the opening shot, the production values are exquisite and the acting impeccable, with one of the best musical scores heard all year from Adrian Johnston, where this turns into a mysterious whodunit, where the clues are continually hidden from view, much like an opening shot from cinematographer Matt Gray of a mammoth country estate shrouded in fog.  As the director of Brideshead Revisited (1981), it’s clear Sturridge loves big houses.  A teacher is seen leaving a young boy’s academy, apparently due to a change in curriculum from Greek to conversational French, where John Standing (Matthew Rhys) walks into town where he plans on catching an evening train.  Stopping in a local pub, he’s about to leave when he receives someone else’s change, catching a glimpse of that other person who looks surprisingly like himself.  As it turns out they are exact doubles who share no family history, where the other person’s name is John Spence (played by the same actor in dual roles), as the two talk well into the night getting acquainted.

Set in 1952, a time when Britain is preparing for a coronation, a ritual that has gone largely unchanged for the past thousand years, as Elizabeth II ascends to the throne the instant her father (the subject of King’s Speech) King George VI dies, but awaits the actual celebratory coronation before the public and the world.  When Spence (filthy rich with suffocating family obligations) and Standing (free as a bird) discuss their life differences, Spence suggests this void between ascension and coronation is a time ripe for anarchy.  Accordingly, Standing awakes in the morning with his wallet, Spence, and all his clothes gone, but George (Pip Torrens), a gentleman chauffeur, arrives with a Rolls Royce Silver Wraith to take him home.  Obviously there’s a mix up, but before he can be taken seriously, the wrong man is transported to an immense country manor that in real life is known as Knebworth House, located 30 miles north of London, the site of outdoor rock concerts (including The Who), THE KING’S SPEECH, Harry Potter and many other notable films. Instantly recognizable as the missing John Spence, Standing has little choice but to play along, as they attribute his protestations to the delirious effects of a hangover and urge him to attend to the serious matters at hand, namely the family glass business, which may be going under due to financial difficulties, where Spence was sent in a last ditch effort to negotiate a miracle save.  Standing, of course (and the audience), is surprised by each and every revelation, where the introduction to this new world is brilliantly realized literally one room and relative at a time, where we are never sure if he is going to pulled into a secret embrace or the object of disdain.  We immediately realize Spence was some kind of arrogant monster that literally infected everything he touched with a callous contempt for living.

The curious narrative is a variation on The Prince and the Pauper or THE MAN WHO WOULD BE KING (1975), where Standing has literally inherited a new upper class, aristocratic life where he continually has to play this game of filling in the empty spaces, like uncovering all the missing ghosts of the mansion, hoping he won’t disturb them and contribute to the literal undoing of the entire family.  He quickly discovers he’s having an affair with his sister in law, Sheridan Smith, and a French mistress, Sylvie Testud, while his sister Blanche, Jodhi May, hates him (“You disgust me!”) for some reason.  The lady of the manor, Eileen Atkins, deliciously haughty and superior, is a recluse with a morphine habit, while his own neglected wife, Alice Orr-Ewing, is nearly invisible, quick to blame herself first when things go wrong, but fortunately he has an adorable young daughter, Eloise Webb, that almost singlehandedly makes it all worthwhile.  Sorting out the mess that was left behind is quite an undertaking, as there’s a world of responsibilities that have been neglected, where the director has a field day unraveling the clues with an entertaining relish, building suspense and tension throughout, especially the secret return of the real Spence who has malicious designs, where he has set up a pawn in the game as an unsuspecting scapegoat.  But in this film, knowledge is everything, as is knowing how to use it, where Standing is a quick learner, an improvement in every respect from the real Spence, actually making a difference when all was thought to be lost.  A battle of good and evil where both are one and the same, Spence is literally amazed, “You’re almost as good at being me as I am.”  Rhys is excellent in the dual roles, where his scenes together with Jodhi May are exemplary stand outs.  Underneath it all, of course, we learn the real source of power is not held by either man, but exists in the stern and watchful eye of the housekeeper, Phoebe Nicholls from Brideshead, who understands the workings of the household better than anyone, where the secret of the film is that destiny often comes from unexpected places, as she’s the one with insights into the newly celebrated Queen, suggesting she wasn’t raised to wear the crown, yet her coronation was the first to be televised and is one of the longest reigning monarchs in British history.
Posted by Robert Kennedy at 12:03 PM