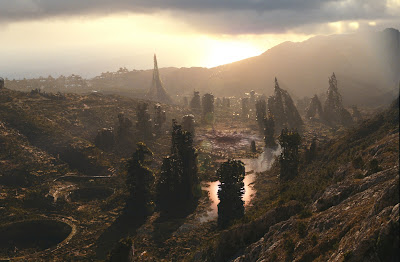 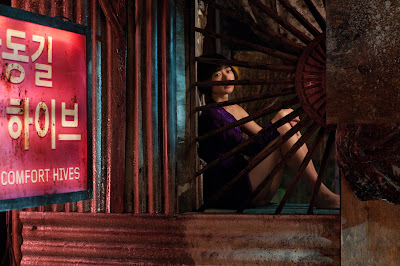 This is Hollywood moviemaking at its excessive worst, which unfortunately the movie moguls think is the absolute pinnacle of box office entertainment, throwing $100 million dollars into big stars and an entire galaxy of computer graphic designers, where it takes over a minute during the end credits just to list them all, using a popular novel by David Mitchell as the source material, where in their eyes, this is a financial gold mine, a big budget item turned into a colossal action adventure movie modeled on so many other previous successes, like LORD OF THE RINGS (2001–03), AMISTAD (1997), ONE FLEW OVER THE CUCKOO’S NEST (1975), AMADEUS (1984), or Blade Runner (1982), among others.  In the eyes of high-priced Hollywood executives, this is considered a popcorn movie sure to spark interest in the adulated viewers.  But the problem is the lack of coherent direction, actually using 3 different directors, brother and sister Andy and Lana Wachowski along with German director Tom Tykwer, as the story is told so piecemeal and haphazardly, continually stringing along a series of separate stories, moving back and forth in time, using actors in multiple roles throughout the constantly changing narratives, all supposedly coming together at the end in some kind of thematic whole, but it just doesn’t work.  And the problem exists at the outset, as each individual storyline is constantly interrupted, like a serial installment, moving backwards or forwards in time for yet another developing storyline, which is also abruptly interrupted, where so much of the time is filled with listening to an inner narrative reveal the different plotlines, hardly a scintillating concept, where the audience loses any real connection to any of the storylines or characters before they ever have a chance to gain interest.  By the finale, when similarities are supposed to impressively come together, it’s too late, as the audience no longer cares.  Few, if any of the characters throughout actually sustain any interest, where Tom Hanks is supposed to be the overall lead character but he’s completely miscast, as he’s never seen in character but instead as the ever likable Tom Hanks, and in the end turns into Uncle Remus.  Perhaps the one star of the show is Halle Berry, who actually delivers one of her better performances in her entire career, but so much of it is lost, as are all the performances, in the mumbo jumbo of the mangled storylines.

Unfortunately, not all the storylines hold sufficient interest, such as the mid 19th century voyage across the Pacific, where the entire segment continually plays to stereotype and could easily have been jettisoned in this near 3-hour monstrosity.  Similarly, equally uninspiring is another AMADEUS storyline that features a world renowned composer too ill to continue working until a young upstart with a mysterious past walks into his life and rekindles his musical inspiration.  Do we really care, as there’s nothing remotely original about either segment?  That leaves four other interweaving stories, where even one of those is questionable, but becomes significant due to Berry’s strong performance as an investigative reporter risking her life to get a secret report exposing a behind-the-scenes power play of corporate greed and theft, where big oil is intending to create an apocalyptic disaster to rid the earth of the remaining oil reserves in order to join forces with current owners to buy up monopoly shares in the nuclear power business.  Typically, the way this plays out, Berry is a lone do gooder who is targeted, much like Karen Silkwood in SILKWOOD (1983), a paranoid thriller with real life implications.  Honestly, the film could do without these 3 segments, which leaves 3 remaining segments and 3 directors, where one each might have been a more inspired idea.  However, since they so closely resemble, both in tone and atmospheric style, previous Hollywood blockbusters, this appears to be no accident.  One resembles ONE FLEW OVER THE CUCKOO’S NEST, as an irate elderly brother plots revenge against his brother that desperately comes to him in a time of financial trouble and instead finds himself locked into a mental asylum run by a sadistic nurse (Hugo Weaving in drag) with no way out, where a comic escape sequence by an elderly foursome is inspired by CHICKEN RUN (2000) or THE GREAT ESCAPE (1963).  While this segment does have hilarious moments, starring the befuddled Jim Broadbent, it doesn’t hold a candle to the remaining two segments in terms of dramatic reach.

The final two sequences are sci-fi futuristic, though one feels almost prehistoric and could just as easily be the mythical set of Xena:  Warrior Princess (1995 – 2001).  Both are the most spectacularly designed, one a futuristic world of robots and slaves, set in Neo Seoul, Korea in 2144, where Doona Bae lives her life as a corporate slave, treated and behaving exactly like a robot, where every other model looks and behaves exactly as she does, all programmed to serve customers in a futuristic fast food franchise.  In order to guarantee compliance, each wears a metal collar around their necks that with the push of a button will instantly kill them.  By accident, she observes one of the models risk their life for a chance at freedom, but fails, instilling the idea in her head.  Next, out of nowhere, she’s whisked away into a futuristic urban landscape by a freedom fighter of epic proportions, turning this into a mix of STAR WARS (1977) and Blade Runner.  The sequence connecting the future to the past is actually set in a post apocalyptical 24th century, a segment where the Hawaiian tribal language can feel restricting, where people are farmers and goat herders simply living off the land with primitive instruments while marauding raiders with horses and swords often plunder their villages and kill their people, where Tom Hanks witnesses some of the killings first hand while he was hiding and cowering in fear, engulfed in guilt afterwards, where he is visited by Halle Berry as a visitor from the future looking to unlock a key to her past.  Together, after initial mistrust, they forge a new understanding, one with Star Trek (1966 – 69) universal ramifications.  With often dreadful make up and costume changes, the idea that these characters are somehow connected over time, as advertised, just never comes together in any coherent fashion, as it might require character development, something altogether missing here with the possible exception of the continually misused Hanks and the resplendent Berry.  Spanning some 500 years, the film blends drama, mystery, sci-fi, action sequences, and enduring love stories as a means to suggest humanity is driven by an overriding need for freedom, inspiration, and love, suggesting these powers exist both before we are born and continue well after we are gone, where characters struggle and fight throughout the generations to rediscover these elements of their humanity, and that the world is somehow shaped by whatever acts and decisions we make.  All that’s missing is a rousing rendition of Michael Jackson breaking out into “We Are the World” Michael Jackson - We Are the World (6:20).
Posted by Robert Kennedy at 4:00 AM