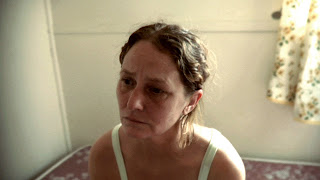 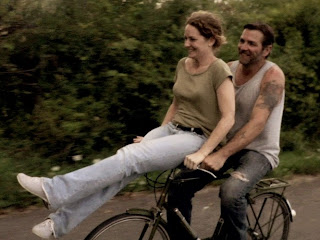 This is a horribly downbeat film evoking stark alienation along with many unpleasantries of rural poverty that some will find shocking in its portrait of tragedy and loss, also in its graphic depiction of animal cruelty, but retains a central focus through the idiosyncratic performance of Melissa Leo, from FROZEN RIVER (2008) and her Best Supporting Actress role in THE FIGHTER (2010), who is seen in the film’s opening being released from incarceration, which could be prison or a locked mental health facility, as the film never makes it clear, nor does it provide any backstory as to how she arrived there in the first place.  Instead the near wordless character study simply follows her routine after she returns home alone into an isolated, rural community, as if pointing a camera at someone helps make some sense out of their life.  This is the third film seen recently, by the way, featuring scenes with women naked in the shower, including Sarah Polley’s Take This Waltz (2011) and Julia Loktev’s The Loneliest Planet (2011), where one common element is a similar vision by female directors.  Not sure what to make of this trend other than to suggest these scenes reflect women at their most vulnerable where they have nothing to hide.  The collaborative husband and wife team of filmmakers Brian Cassidy and Melanie Shatzky have a history making documentary films, where both are co-writers and directors of this film, while Cassidy also works behind the camera as the cinematographer.  Shot in video, the camera offers a highly mobile presence, literally tracking the random daily occurrences, which includes her arrival home to a small house in upstate New York situated on a tranquil lake.  The remote calm feels like a surprise, as one could think of worse places to begin anew, but a glimpse of life at her job inside the local Petco store feels a bit hectic, even if some of the products are mysteriously weird, as if the quicker pace of having to interact with co-workers and customers is difficult, as Francine rarely utters a word or changes that sullen look on her face, feeling socially inept, eventually losing her job from sheer social awkwardness.  But she makes the rounds and hits the bars or goes to parties, usually drinking too much or having inappropriate sex, picking up stray animals en route, feeding them and taking comfort in their accessibility, as they become her only solace.  Over time her house is overrun with animals, as she becomes obsessed with animals at the expense of human interaction.

Along the way we see a glum Francine wander around town, where a death metal band is playing in an open field to about a dozen listeners where she joins a group of others thrashing around, her head shaking to the frenzy of the music, a sort of kick out the jams moment.  We also see her at an AA meeting and at a local church service, but from the decrepit look at the inside of her home, completely overrun by her accumulated collection of strays, literally playing with each as if they were helpless babies, we realize life’s gotten the better of her, as she’s lost any sense of order or balance, sliding off the edge, mostly retreating into her squalid trailer trash existence.  This may catch some by surprise, as initially one may have missed the clues, but eventually the camera captures the numbness in her disaffected life, where only the animals provide meaning, as in her eyes they are so defenseless, constantly seen hugging and kissing them, but her rising animal count only increases the clutter and disarray inside her home, reflective of her mental state, where she’s incapable of realizing what’s happened even after she starts working as a veterinarian’s assistant, where some of the graphic images seen are deplorable, where the camera never shies away from staring death in the face, where the concept of harm, both to herself and to animals, rises to the surface.  The observational style remains too detached and the overall mood ambiguous, often meandering at times or even aimless, where the audience is kept at a distance without ever sensing the intimacy or immediacy of the moment.  Not sure this young director team has made the transition between documentary and fiction, as what’s missing is any element of human drama, creating a fictional character with literally no story construction, existing instead in a netherworld of mental torpor.  Even as she empathizes with the plight of animals, it’s clear she’s incapable of really managing her own dreary life, where the bleak austerity is all we’re given.  Given a spare and unsentimental gaze, it’s little more than a minimalist outline, a sad and empty portrait of mental alienation, not nearly the powerhouse work of Lodge Kerrigan’s more emotionally resonant KEANE (2004).
Posted by Robert Kennedy at 8:20 AM