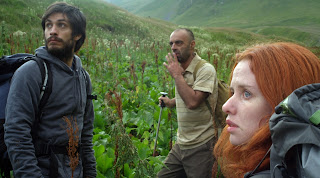 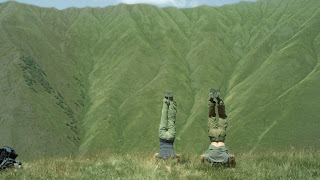 The rise of the road increases, the mountains close in more and more tightly, and it seems as though there is no longer any hope; only a bit of sky is visible above our heads. It has a disheartening effect on us; we are overwhelmed and keep silent. Suddenly, at a sharp turn in the road, a huge chasm opens up on our right…

—In Wonderland, on his visit to the Russian Caucasus in 1899 by Knut Hamsun,1903

Julia Loktev emigrated to America from Russia at age 9, so she s intimately familiar with the immigrant experience, which she uses here as a kind of minimalist existential travelogue through the Caucasus Mountains of Georgia, one of the former Soviet satellite countries bordering Russia, now an independent nation since 1991.  This foreign sensibility is at the heart of the film, though it’s transposed into the midst of an immense mountainous landscape where Alex (Gael García Bernal) and Nica (Hani Furstenberg) are a young couple in love and about to be married spending the summer backpacking across Georgia, hiring a local guide, Dato (Bidzina Gujabidze), a non-professional actor who is in real life a professional mountaineer.  This is about as bare bones a story as you’re going to find, offering little to no backstory, most all of it untranslated at the beginning, as people communicate in mixed languages (where the director’s knowledge of Russian helped her with the older generation in Georgia), where the three of them simply set off into the mountainous back country, where the presence of humans barely registers in this otherwise pristine wilderness.  Adapted by the director from a Tom Bissell story Expensive Trips Nowhere, the film continually draws upon other sources, perhaps most centrally the Georgian/Russian film director Mikhail Kalatozov’s Letter Never Sent (Neotpravlennoye pismo) (1960) and his legendary WWII cinematographer Sergei Urusevsky whose camera mobility is renowned, following a psychological shift from professionalism to the deteriorating mental breakdown of a small scientific team dropped off in the vast Siberian forest.  The only female in the group, Tatyana Samojlova from The Cranes Are Flying (Letyat zhuravli) (1957), creates sexual tension between her physically timid and intellectually reserved husband and the more virile, masculine outdoorsman of the group, set against the remote Siberian wilderness, pitting the forces of human nature against what eventually becomes the strongest force in the film, the dominating primeval landscape.

In this film we have two cultural sensibilities pitted against one another, an attractive, free spirited woman in the company of a Western and Eastern European male companion, where she’s having a sexual affair with Alex under the watchful eye of their semi-educated guide and the silent presence of the great outdoors.  Using hand held cameras from cinematographer Inti Briones, the entire film is a walking expedition through an immensely beautiful region with little more to hold our attention than the region itself.  The insipid dialogue or barely communicated thoughts reveal little interior depth of character, where all remain a stranger to one another, spending most of their time walking separately, lost in their own thoughts, though at the end of the day after pitching their tents they make feeble efforts to talk, drink, sing, or socialize, but the film never penetrates the exterior façade of any of them.  If anything, the couple remains in a lighthearted and playful mood, where they can barely take their hands off each other until a single event challenges their carefree nonchalance, an event that is never discussed but is allowed to fester, like an open wound.  Like two separate halves of a film, the second half becomes more brooding and introspective, especially as seen through Western eyes, as Nica spends most all of the first half with Alex, but the two barely speak afterwards, where their continual walking becomes an exercise of drudgery, even through such a magnificent landscape.  Nonetheless, the camera holds tight with the visceral feel for extended hiking, walking until nearly exhausted, where Alex collapses into bed while Nica has a prolonged scene sharing drinks over a night fire with Dato, who attempts to open up about his life, bringing an Eastern sensibility into the picture, where what is expected of him is completely different.

What’s missing in this film is the overwhelming force unleashed by the Siberian forest in Kalatozov’s film, where any human presence was quickly placed in peril, with all previous psychological mind games and personal motivations rendered moot, as survival was at stake.  Here the effect is much too subtle, where there is a major behavior difference, but most all of it interior, used to little overall dramatic effect.  Instead, the focus of the film remains on the physical movement of hiking itself, similar to mechanized feet in a Bresson film, but much more of it, becoming a dreary and overwhelmingly monotonous exercise without human interaction, where the pace of the film slows to a crawl, resembling the treacherous pace of GERRY (2002).  Often seen in long shots where humans are mere specks dotting the landscape, where the director once backpacked alone across Central Asia from Turkmenistan to Kazakhstan for six months at age 22, bringing that same feeling of isolation into what starts to feel like a misadventure, as if something terribly wrong is contaminating the souls of each one of them, where their mood grows darker and more bleak, holding out little hope of repairing whatever’s broken.  The film recalls the interior structure of Atom Egoyan’s CALENDAR (1993), where a Canadian-Armenian couple drift apart while visiting ancient ruins in their European homeland, where the girl is inevitably drawn to their handsome guide, leaving the narrator to fend for himself in what amounts to a strange land.  Unfortunately, while there is a hint of major psychological repression from suffocating interior claustrophobia, Loktev fails to bring any element of suspense or mystery into the long and arduous journey, becoming painstakingly empty after awhile, where the significant drama is all taking place under the surface, expressed through the rigorous minimalism of her earlier film, DAY NIGHT DAY NIGHT (2006), constructing a film through the meticulous accumulation of minutiae.
Posted by Robert Kennedy at 10:08 AM