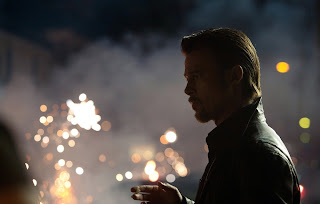 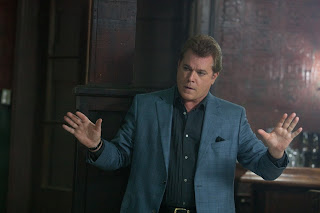 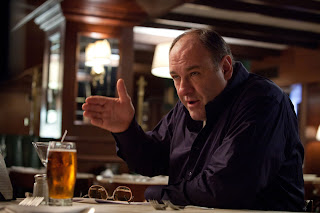 Dominick is a New Zealand-born Australian film director and writer, adapting the screenplay from the 1974 George V. Higgins novel Cogan’s Trade, described by The New York Times "No Innocents in This Jungle" article as “the seamy netherworld of the savage seventies” where none of the characters can be considered good.  In fact, like Don Siegel’s CHARLEY VARRICK (1973) or the Coen brothers NO COUNTRY FOR OLD MEN (2007), the premise is stealing money from the mob, where they send a guy to track down the money, a kind of avenging angel fixer who cleans up the mess left behind.  While the story is set in Boston, the movie was shot in New Orleans, much of it resembling an urban wasteland, where a good deal of time is spent navigating their way through this urban jungle.  While the story concerns a couple of small time hoods, Frankie (Scoot McNairy) and Russell (Ben Mendelsohn), who think they can make a big score by ripping off the mob, the film is a series of character sketches defined by lengthy scenes of endless talking, where at times it can be clever or hilarious, but there’s also a running thread throughout that comes from continuous television or radio news reports in 2008 announcing both Presidential candidates John McCain and Barack Obama’s vision for America, followed by President Bush describing the first signs of an unraveling, economic freefall that defined Obama’s first 100 days in office, as reality forced his hand and co-opted his feelgood vision of change, forcing him instead to bail out the banks, Wall Street brokerage houses, and the auto industry, forcing him to clean up the mess left behind by the unfettered deregulation run amuck during the Bush administration.  While this offscreen political narrative always seems to protrude into the scene, like a necessary evil, it parallels the theme of a professional mob enforcer cleaning up after the reckless behavior of undisciplined, small time punks.

Who has a more recognizable face of the mob than Ray Liotta from Scorsese’s Goodfellas (1990), playing Markie, a local mobster that runs an underground card game.  Having bragged once that he ripped off his own card game to make a big score, Frankie and Russell figure if he was negligent once, he’s sure to be blamed again, taking the heat off of them.  What’s interesting about this duo is their colorful flair for lamebrained ideas.  Frankie is the kind of hood that can’t keep his mouth shut, nervous and twitchy, where he’s just a bundle of nerves, while Russell, taking a page out of Seven Psychopaths (2012), earns a living by stealing dogs and then reselling them on the black market.  Russell has an everpresent layer of sweat and grime on his face, where he’s such a lowlife junkie that it’s immediately apparent he’s not to be trusted, but for Frankie, he’s his best and only friend, so like an idiot, that’s his chosen partner in crime.  The two pull off the scam and a price is immediately placed on their heads, where even as they’re pulling off the heist, Markie tells them matter-of-factly, “You know you’re dead, don’t you?  Are you sure you want to do this?”  All we see initially is just the boots, and then an offscreen voice, but the fixer sent in the clean up the disarray is Brad Pitt as Jackie Cogan, the title character, exactly like Javier Bardem as Anton Chigurh in NO COUNTRY FOR OLD MEN, something of a throwback to Harvey Keitel’s original clean-up guy, Winston “The Wolf” Wolfe, in Pulp Fiction (1994).  While Dominick, like Tarantino, shares a love for outlaws and quirky dialogue, Dominick’s characters are less fantasy and more grounded in reality.  What’s amusing is the continually running scene with Pitt in the car with Richard Jenkins, known only as the Driver, where the two have a discussion about murders for hire, but the Driver reflects the modern era mob mentality, as he’s a legitimate businessman who answers to what amounts to a collective board of trustees that has to vote on everything they agree to before it’s authorized.  Cogan would rather make things quick and easy, save time and trouble for everyone, where his motto is “I like to kill them softly—from a distance,” but not this group, as they hesitate and agonize over every little detail in what amounts to a stalling tactic.  Cogan goes along with it, as it seems like easy money once these guys actually make up their minds.

Cogan brings in an out-of-town partner, James Galdofini as Mickey, who drinks like a fish and screws every hooker in town, yet his colorful language is absolutely killer material, easily the best thing in the movie.  At heart, he seems to represent the viewer’s idea of a typical mob operator, as he’s all brass and balls, the kind of old-school mobster whose gutter mouth feels like a character pulled out of a David Mamet play.  But Cogan doesn’t see it that way, expecting something professional, where all the guy wants to do is drink and tell stories, where he’s as evasive as the Driver, guys that continually procrastinate and never get down to business.  As we hear the background sounds of Washington politicians promising a new world, they all seem to talk the same game about a united country, but then can’t agree among themselves how to make it happen, reduced to squabbling and incompetency, all while the country’s economic woes spiral out of control.  Cogan has to cut through this haze of pie-in-the-sky bullshit, which he finds almost mocking in tone, a kind of doublespeak that amounts to a paralysis of inaction.  He, on the other hand, after undergoing the agonizing, exhaustive, soul searching conversations about restoring the rightful, unlawful order of the criminal underworld, which are themselves a graphic picture of gangster slang, has a fairly lethal yet simplistic approach—just put a bullet in the guy’s head and be done with it. The conversations are actually funny, but there’s plenty of empty space between action scenes, plenty of down time where you’d think instead there’d be chase scenes and action galore in a movie about gangland slayings.  There are plenty of graphic scenes of violence here, given an almost ballet-like slow motion choreography, but the picture is really about probing the interior mindset of hardcore criminals, displaying a unique ability to capture the rhythms and textures of their language, heard in parallel with flowery political rhetoric espousing the nation’s ideals, all while observing the subculture of mob capitalism at work, apparently not that different from Washington, where “In America you’re on your own,” a place where selfish interests rule, where the bottom line is every action is a negotiated business decision designed to make the most amount of money.  What’s different about the mob, however, is they actually collect on their overdue debts.
Posted by Robert Kennedy at 9:45 AM