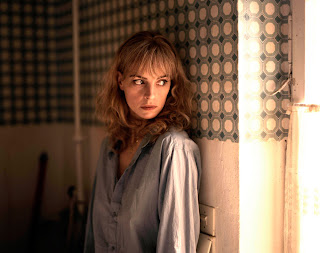 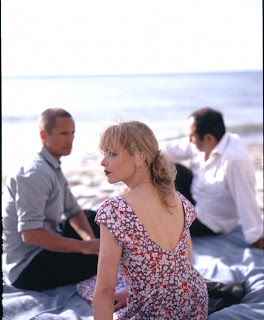 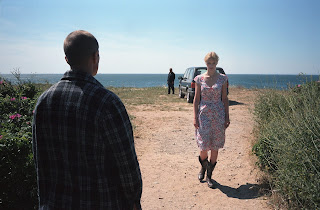 A German film that’s so German it feels like it’s Austrian, as it’s a surgically precise psychological thriller, a remake of THE POSTMAN ALWAYS RINGS TWICE (1946) that features an overly detached, icy cold emotional world.  Benno Fürmann is brilliant from the outset without even uttering a word, as that piercing glare in his eyes could immediately disarm anyone’s hostile intentions.  Yet in the opening sequence, the director completely breaks from the mold as the hyper aggression directed toward him defies belief, as does his perceived passivity, which hides his real intentions.  Immediately we’re lured into what’s underneath the surface.  Petzold’s last film YELLA (2007) was another standout in cleverly creating multiple layers of suspense, which included the added twist of interchangeable psychological worlds, where a dreamlike Antonioni reverie would replace the meticulous minutiae of drab or dreary reality, teasing the audience with completely indistinguishable states of mind.  The same actress Nina Hoss returns here as the object of two men’s desires, all three hiding behind dark and mysterious pasts.  Her Turkish husband is Ali, Hilmi Sözer, an enterprising foreigner in Germany who runs a string of successful food huts, but has a pathological distrust of those that work for him, as he suspects everyone of cheating on him.  Over time, he uncovers several clever schemes to rob him of his profits.  He runs into Fürmann completely by accident in a scene that borders on the absurd, yet the believability factor is completely authentic, especially Fürmann’s character, a former soldier in Afghanistan, now a moody silent type who lives alone rebuilding his deceased mother’s house.  Ali hires him to be his driver after he loses his license for drunken driving, but he becomes his most trusted employee, more like a bodyguard, as he saves Ali’s life from irate or distraught employees on more than one occasion.  In friendship, he introduces him to his German wife, the beguiling Hoss, who effortlessly combines multiple levels of emotions all at once, which seems to be the inspirational emotional source of the film, that we are all things simultaneously, quite capable of wisdom along with disastrous blunders, at times not able to distinguish between the two.

We’ve seen this before in Polanski’s initial feature film KNIFE IN THE WATER (1962), a tantalizing battle of wills between two men vying for a sultry lady, or the scandalous noir thriller THE POSTMAN ALWAYS RINGS TWICE (1946) featuring iconic performances from John Garfield and Lana Turner, or the loveless and amoral murder mystery of DOUBLE INDEMNITY (1944), all of which exaggerate the hidden intentions of the characters.  Much like Douglas Sirk clouds the emotional surface with a flamboyant color scheme that hides his character’s repressed inner worlds, noir films are drenched in darkness and doom, a fatal combination when love is in the air.  Petzold carefully crafts his own world of suspicion where Ali is surreptitiously spying on his own employees as well as his wife, supposedly trusting Fürmann, which feels out of character, allowing him access into the inner sanctum of his business and his personal life that includes his wife, the two most successful ventures of his life, which from his own poisonous behavior seems capable of precariously unraveling at any moment.  Ali can be amusing, but is subject to drinking binges, which leaves an opening for Fürmann who is initially rejected, but then pounced on by Ali’s sensuous wife.  When Ali pretends to take a business trip abroad for a few days, leaving Fürmann in charge, the audience sees that he doesn’t actually leave, something the character’s themselves don’t suspect.  Everything after that is veiled in a lurid mystery of misguided emotions, all subject to the creepy idea that Ali will jump out of the bushes at any moment and surprise our budding young lovers who are dangerously crossing the line and breaking the limits of moral acceptability.  This creates an added level of suspense and an exposed emotional vulnerability that otherwise would not be there.  Within this scenario, things usually spin out of control, even from the perfectly controlled world of Fürmann, as their behavior only grows more dangerously suspicious, where ironically Fürmann was offered a choice earlier whether or not to rescue Ali as he was dangling precariously off the edge of a cliff, an act that sealed the deal for Hoss who immediately fell madly in love with him, her knight in shining armor that might come to her own rescue.

Petzold’s stories take their own path where the question remains whether or not any crime has been committed, and if so, to what degree does it effect one’s life?  This is a Crime and Punishment story that explores the extent of one’s guilt even before any wrongful action has been committed.  Can just the mere thought of an illicit action put one in the same moral abyss as committing the act?  Does skimming from the profits compare with spousal abuse or murder?  How far can one cross the line before it’s clear they’ve passed the point of no return?  In this film, the audience sees the various developmental stages, including the measures of protection taken to protect both business and privacy.  What can stop a crime of passion?  The three main characters are particularly strong here, smart, compelling, yet psychologically cautious and mistrustful, where emotions are seen as a weakness, something to be taken advantage of by others, where Hoss declares at one point that without money, love is never even an option.  In an economically depressed region where jobs are scarce, money is as much a fictitious object of desire as passion, where in a unique role reversal, the moneymaker is a Turkish immigrant, usually the object of racial scorn in German films, given considerable poignancy by Sözer’s performance, while his penniless, down on his luck “guest worker” driver is a German citizen.  In a film that’s hazy about true character, what’s especially compelling about both Hoss and Fürmann is coming out of the emotional void of an extended loveless state, where they are suddenly stripped of all protection as they are ensnared in the intrigue of love.  Petzold tightens the noose around each one of the characters until they nearly suffocate on their own delusions, with their paths so meticulously carved out ahead of time but never quite taking into consideration the unknown factor that is present in each and every crime.  Stripped of all pretension, souls are finally bared, but at what cost?  Everybody loses a piece of themselves until there’s finally nothing left in the end but the illusion.  While not nearly as off-the-edge and experimentally risqué as YELLA, this is every bit as well crafted, balanced, and deliciously entertaining.
Posted by Robert Kennedy at 8:58 AM