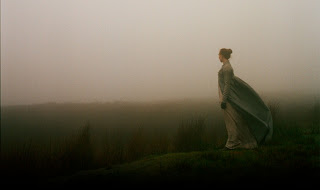 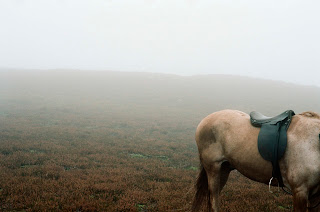 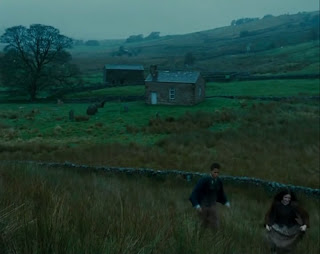 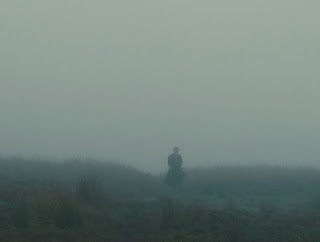 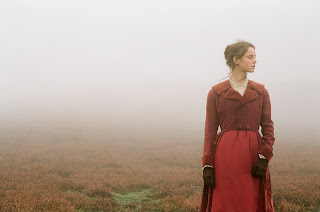 While revisionist works are always controversial, this one is a flawed misstep, reverential in tone as a visual essay of a literary work, where the words are lost in an incomprehensible mix of bad acting and mumbled sound recording.  Throughout this mostly wordless film, very few words can actually be understood, instead relegated to background noise, which seems to be by design as the director’s intent.  Arnold is known for using non-professional actors, but that appears to go awry in this version, as the actors are simply incapable of generating any interest towards any of the characters, all of whom are mere sketches of mostly unpleasant people.  The same criticism was levied against the original novel, that the story was unlikeable and the 18th century characters unpleasant.  While the 1847 novel by Emily Brontë was published in the mid-19th century, this film version feels more like the Middle Ages of Chaucer, especially since language is all but obscured, which heightens the graphic brutality on display, including continual mistreatment of animals, where people are seen as little more than wretched and contemptible people.  Within this setting, where nature abounds, they are literally surrounded by a near idyllic pastoral landscape of verdant rolling hills in the Yorkshire moors, a place where human evolution lags behind, as despite the pristine, Edenesque beauty, humans are little more than grotesque animals on the loose, matched by the constant presence of continually barking dogs.  The opening hour of this film is largely an abstract visual essay, a mosaic of constantly shifting patterns of darkness and light, where the stunning compositional beauty of the cinematography by Robbie Ryan is painterly, much like a Joseph Mallord William Turner (1775 – 1851) landscape, like “Landscape with a River and a Bay in the Background” (1,016 × 768 pixels), an English landscape style that pre-dates the Impressionists.  Shot in a boxed 1:33 aspect ratio literally saturated in a claustrophobic, arthouse style, everything layered in a sensuous glaze, the experimental style initially feels highly inventive, but after awhile the style itself grows repetitive, especially when the mind’s eye of a child grows into an adult and the surrounding world looks exactly the same, unchanging and still uncompromising.

While there are at least 15 different versions of this story on film, making it one of the most popular movie adaptations of a novel, the most famous is the William Wyler version with Laurence Olivier from 1939, an overly stiff costume drama suffocating in Gothic period atmosphere, where reality is nowhere to be seen in that production.  Given Andrea Arnold’s penchant for social realism, she literally turns the genre form upside down and reshapes this into an experimental film, using handheld cameras and a pervasive use of the natural countryside, almost always engulfed in low-lying fog, not to mention endless wind and rain, becoming not just melancholy but overwhelmingly dreary.  Arnold makes a few significant alterations, changing class differences to racial inequity, casting Solomon Glave, a young black actor as Heathcliff, who is an abandoned boy, perhaps a runaway slave found roaming the streets of Liverpool, taken in by the Earnshaw family as part of their Christian duty and raised as one of their own, much to the utter contempt of eldest son Hindley (Lee Shaw), who continually makes abusive and disparaging racial taunts (“He ain’t my brother, he’s a nigger”), but is loved openly by the only daughter Catherine (Shannon Beer).  The two are seen forever roaming the hillsides together where their playfulness leads to budding sexual feelings.  When her father dies unexpectedly and Hindley takes over the farm, Heathcliff is immediately treated as a servant, banished to sleeping in the barn, unable to eat or socialize with the family.  The film is seen completely through the eyes of Heathcliff, often peering around the corners of buildings, behind a hedge, looking into a window, all in search for Catherine, where he becomes obsessed by her every move.  Hindley’s temper often gets the better of him, where he can be seen punching and kicking Heathcliffe, all for minor infractions, becoming more explicitly racial, calling him a “nigger” and a thief, giving him a brutal whipping, continually showing him his place, where he’s not one of the accepted family members.  Still, Heathcliff seems to hang around for a chance to see Catherine, though when he actually utters something, it feels crude, horribly insulting, and completely out of place.  When Catherine decides to marry a local boy, Edgar (Jonny Powell), a rich neighbor, Heathcliff quietly disappears in the pouring rain.

A significant period of time passes, as Heathcliff (James Howson) has elevated his class status and returns a wealthy man, but Catherine is still married.  This doesn’t prevent continual visits, where they return to the open wild of the hilly countryside, also mixed in with flashback sequences of when they were younger.  For all practical purposes, Catherine (Kaya Scodelario) is the lady of the house now, complete with servants waiting on her, where her rendezvous visits out on the moors with Heathcliff have scandal written all over it.  Older actors assume their roles, but they fail to convey any of the sense of exuberance or naturalness of the younger actors, lacking deep affection or the brooding gravitas needed, where Heathcliff is more of a stalker than a lover, and despite his elevated class status, there is little that can be done, as she has married into wealth and a life of comfort and ease.  Danger, however, surrounds their every move, as no good can come of it.  The more Heathcliff insists on staying, the more their lives are doomed, destroying everyone around them.  Initially in his return, Heathcliff was driven purely by revenge to get back at Hindley, whose life has spiraled into drunken chaos and debt, a shell of his former self, hardly worth thinking about.  Purists will scoff at Heathcliffe’s use of profane gutter language, though mostly he says nothing, where at some point Catherine actually realizes, “You never have anything to say,” to which he responds, “That never bothered you before.”  Brontë followers will likely be offended by Arnold’s choice to make a near wordless film of a literary masterpiece, and if the spontaneity of young actors had succeeded, perhaps this might have been a boldly exciting, quasi punk experiment in power and passion.  But instead the audience feels cheated by the lackluster performances, feeling emotionally empty, where despite the overwhelming brilliance of the style, this is an overly bleak and completely unengaging adaptation, a missed opportunity, an unrelenting trek into abject misery and pain.  Often adding visual metaphors of birds stuck in cages, moth’s fluttering at a closed windowsill, or insects caught in a spider’s web, animals are as plentiful onscreen as humans, but with each species, we are unable to decipher interior ideas or emotions, where the complexity of the novel has been completely transformed into what becomes by the end an exhausting visual abstraction, a descent into human degradation.
Posted by Robert Kennedy at 8:18 AM