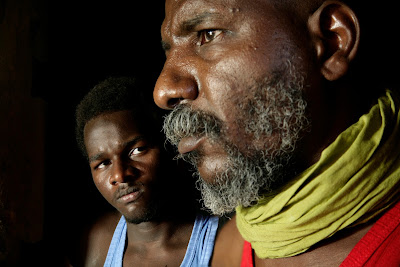 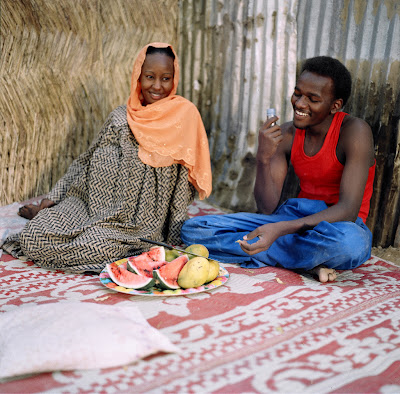 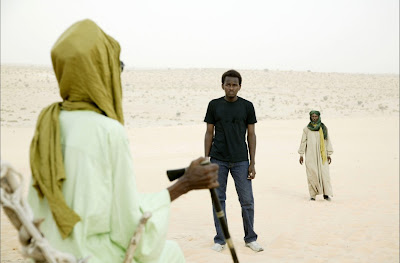 
A brilliant film about the aftereffects of war and how amnesty and/or reconciliation never really brings about a peace, as the profound losses leave the nation and its citizens depleted of its most natural resource, human kindness and love, which all but disappears off the face of the earth.  Interestingly, another African film resembles this story nearly exactly, MUNYURANGABO (2007), released a year afterwards and set in Rwanda, shot by the American son of Korean immigrants doing missionary work in Rwanda.  Both are extremely simplistic, but for raw storytelling that gets to the root of anguish and loss, this film is nearly flawless.  Set in Chad, a former French colony in West Africa, the messenger in this film is Atim (Ali Bacha Barkai), aka the Orphan, a 20-year old kid whose father was killed during the nation’s civil war.  His nickname says it all, suggesting what his childhood must have been like in a tribal society where family connections mean everything, though no other reference to his childhood difficulties are shown in this film.  His face, however, reveals an intent seriousness that rarely, if ever, backs down from anyone.  When he and his blind grandfather listen to a radio broadcast announcing the results of the nation’s truth commission investigations, they find the resulting amnesty for everyone insulting, as murderers are free to roam the streets, including the killer of Atim’s father.  When his grandfather hands him his father’s revolver, sending Atim out to execute his father’s killer, there is no other possible solution in this family’s eyes.  Justice must come from their own hand.


Using a stationary camera throughout, each shot by Abraham Haile Biru is beautifully composed without an ounce of artifice showing the natural colors of the region, the dry arid deserts and the poor dusty villages with mud and clay homes on dirt streets and no trees for miles as far as anyone can see across an empty horizon.  Out into this wilderness Atim is sent, as if fulfilling a Biblical obligation to carry out his mission, which leads him into the capital city of N’Djamena where he is promptly beat up by a few sadistic soldiers, signs of the continuing resentment and rage leftover long after the so-called peace agreement.  He soon discovers the home of Nassara (Youssouf Djaoro), a devout Muslim man who speaks with a voice box, a battle scar left over after someone nearly slit his throat.  He’s married to a young bride (Aziza Hisseine) who is closer in age to Atim, the result of an arranged wedding.  What follows is Atim sullenly and wordlessly helping Nassara who assumes a fatherly role with his sweaty and back-breaking routine of baking loaves of bread, where Atim withholds all thoughts and emotions and takes on the role of an angry, aimless youth far away from home.  Nassara personally acknowledges “I’ve done a lot of harm,” and keeps a small closet filled with a hoard of guns and ammunition.  Haroun advances the story through a series of flawless edits that reveal the passing of time in close proximity to one another, where it’s never clear Atim’s real aims, where under the surface is a seething, pent up rage for which there is no relief.  Atim oftentimes contemplates shooting his victim, but each time he gets his nerve up his target is not readily accessible, so against his will he ends up containing his anger.


A companion piece to the divided lives of Abderrahmane Sissako’s BAMAKO (2006), who is himself a producer on this film, another portrait of the aftereffects of an African truth and justice commission, one also finds a similar theme in the Dardenne brother’s film THE SON (2002), which reverses the role of the child and the adult, as in that film, it is a father’s son that is killed by another kid about his son’s age that he suddenly comes in close contact with at a rehab woodworking workshop for juvenile offenders.  The difference here is the maturity level of the father whose loss is balanced against this adolescent journey to adulthood by a young Atim, continually set against a backdrop of lingering signs of war as evidenced through wordless images of offending police officers, a brutal wife-beating husband, and the seething hostility that continues to exist underneath the surface between father-figure Nassara and Atim.  Written by the director, featuring original music by Wasis Diop, the brother of Senegalese filmmaker Djibril Diop Mambéty, all of this is expressed visually through a continuing series of intelligent, near wordless sequences, where we all but lose track of time, but feel the subtle rumblings of something developing, even if it is just brief instances of kindness or human assistance, as it goes against the better judgment of each character, whose life history has been filled with absorbing continuing rounds of neverending punishment.  The camera lingers on what’s unsaid, on the spacious emptiness that surrounds so many moments of this film.  If the war is over, these men show few signs of it, as they couldn’t be more tense and tightly wound, finding it hard to hold it all in.  The finale is a poetic suggestion that people hold the answer to their own destiny, that the mind can find solutions, even if it doesn’t conform to their family or even their government’s wishes, as there is little doubt but that justice was obtained.
Posted by Robert Kennedy at 9:51 AM