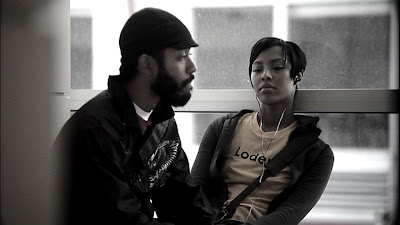 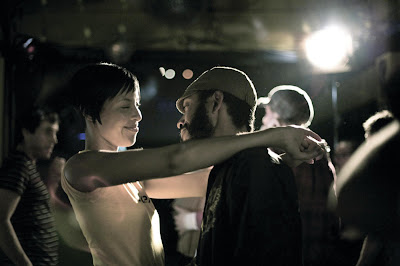 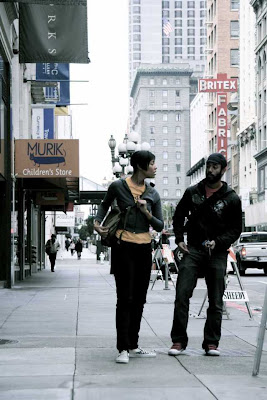 This American indie film written and directed by a first time black filmmaker bears an astounding similarity in style and tone to Cassavetes’ first film Shadows (1959), made nearly half a century ago simultaneous to the era of the French New Wave, probably considered by now as ancient history.  However the intelligent, free-wheeling, improvisational style and the stellar black and white photography by James Laxton reflect the luminous beauty of San Francisco, suggesting a rush of energy that befits any modern age.  But in the intimate manner of Richard Linklater’s Before Sunrise (1995) and Before Sunset  (2004), the centerpiece of the film has to be the extraordinarily naturalistic performances of the two leads, Micah (Wyatt Cenac) and Jo (Tracey Heggins), two young black adults who awkwardly meet the morning after a one-night stand at a party.  Initially having little, if anything, to say to each another, there’s a clever development where they slowly warm to one another.  What’s most impressive is the very ease of their dialogue, how believable they are as these two characters, offering a degree of warmth and intelligence rarely seen in television or films, using the city of San Francisco as a backdrop to the film, with Micah openly hating the city while loving the beauty of it, the hills, the fog, claiming “You shouldn’t have to be upper middle class to be part of that.”

The film follows the next 24 hours of their lives, condensed to segments that are shot pretty close to real time, that have a relaxed and at times romantic air about them despite the fact she’s already married, where there isn’t a hint of condescension or artificiality, yet their moods veer all over the place, sometimes hot, sometimes cold.  To its credit, the film doesn’t feature any snarky intelligence of trying to overimpress or be too hip, where a first time director might be inclined to overwrite certain scenes, looking for a way to stand out.  Instead the film largely impresses with its sense of restraint and good taste matching the personalities of the characters who show a surprising degree of respect for one another.  Where the film doesn’t go is into the deep emotional terrain, more fertile Cassavetes territory, where gut-wrenching drama (Gena Rowlands) lights up the screen.  These are different kinds of characters who aren’t about to plunge headlong into broken heart territory as they’ve only just met, instead they scratch the surface searching for a variety of interests, pretty much checking each other out all day long, having playful moments together while also taking seriously matters like race, where they both see their identity from completely different vantage points, gentrification, disparities in wealth and displacement of the poor, where he claims blacks comprise only 7% of the city’s population, suggesting she’s probably the only black person living in the Marina district, but also kidding around about music and personal tastes, while also finding time to simply relate together, featuring inventive musical choices throughout.

This is not a movie that’s going to blow anyone away with action sequences.  This film features energy over action, both high and low, not afraid to leave spaces unfilled, accentuating intimacy and vulnerability, using words, gestures, looks, wit, risk, charm, listening to what the other person says, but also has moments where they simply want to let loose, loving every minute of being alive where the loud, pulsating beat drives the film.  Initially released at the South by Southwest Fest, it also played at San Francisco (audience favorite of course) and Philadelphia before playing at Telluride.  Had it played at Sundance, it might have generated the kind of interest BALLAST (2008) and other award winners have, but you never know, since this indie style of filmmaking simply isn't being made much anymore, one of the reasons to truly treasure seeing it.  This is a real diamond in the rough, though, a small film with big ideas, surprisingly heartfelt and relevant, yet always down to earth, placing these characters within the realm of people we know, perhaps even ourselves.
Posted by Robert Kennedy at 10:03 AM