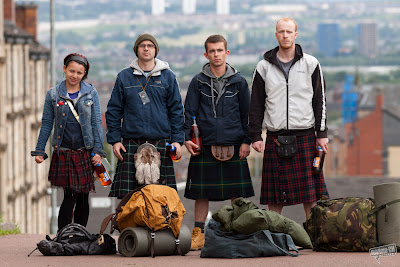 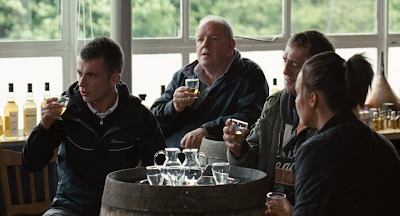 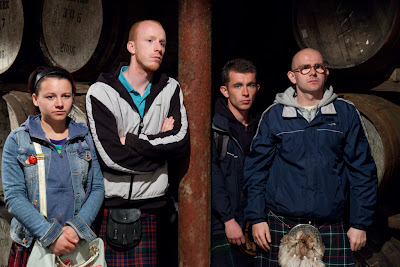 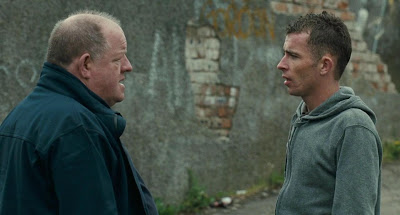 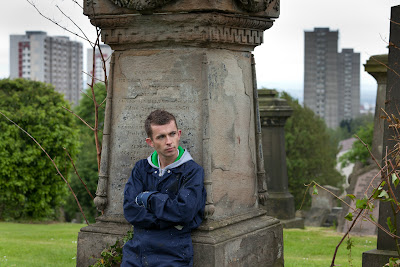 
Loach took Cannes by surprise last year when he won the coveted Jury Prize (3rd Place) for what was considered one of his more lighthearted efforts, and while it may not carry the dramatic heft of Shakespearean tragedy, this is one of the director’s most likeable films.  Working with screenwriter Paul Laverty for their 10th collaboration, the brilliance of his writing is telling, as it’s exactly what’s missing in movies today, where the film’s special charm and appeal is largely based upon the expertly defined Scottish characters, showing themselves as the brainless twits they are in the opening scene where a drunken man flirts precariously close to the edge of a railway platform, taking offense with the frantic railway security microphone warnings, which causes a drunken tumble onto the tracks, barely even noticing he nearly gets himself killed The Angels Share (Opening Scene) - YouTube  (1:44).  The hilarious use of profanity throughout the film (which is subtitled) is utterly priceless, established early on, where the language itself becomes one of the central features of the film.  It’s nearly impossible not to snicker upon hearing the meticulously detailed nature of criminal charges committed by our movie heroes, read one after the other, where what they’re really guilty of is finding joy in discovering an alternative path, finding absurdity in the overcontrolled world around them, where conformity to the established rules is simply not in these characters.  Albert (Gary Maitland), the man on the platform (a street cleaner in real life), has rocks in his head for brains, where his act of inebriated idiocy gets him 100 hours of community service, where the sentencing judge tells him “Your profound stupidity is matched only by your good fortune.”  In the case of Robbie (first-time actor Paul Brannigan), a diminutive fellow with giant ears poking out of his head, like a miniature Star Trek Vulcan that gets lost in the mad drunken ravings of Scottie, his history of near psychopathic violence would trouble any prospective prison inmate, so he’s surprisingly not sent to jail, but is given 300 hours of community service, largely because his girlfriend is 8-month’s pregnant, and perhaps the fragility of a tender baby can help transform what amounts to a career thug into a human being at last, or so hopes the court.  Following the reading of his sentence, we hear more, where Mo (Jasmine Riggins) was caught attempting to steal a macaw, but was apprehended when the tail feathers were seen sticking out of her purse, or Rhino (William Ruane) who has a penchant for destroying statues of any enemy of Scotland, often heard quoting patriotic slogans while in the throes of a drunken stupor.


When this rag tag group of social misfits all meet for community service, they are under the assured guidance of John Henshaw as Harry, a likeable enough guy, by no means a hard ass, and someone who has the flexibility to display a little sense of humor every now and then.  Receiving a call while on duty, his job is to officially deliver Robbie to the hospital, as his wife Leone (Siobhan Reilly) is delivering their firstborn.  But what he witnesses first hand is a colossal beating by a trio of Leone’s uncles warning Robbie to stay away from the baby or they’d kill him, giving him acute insight into just what Robbie’s up against in his struggle to turn his life around.  Having no place else to stay that’s safe, Harry allows him to spend the night, celebrating the birth of his “wee lad” named Luke, pulling out some special aged whisky for the occasion.  While the two enjoy a snort, what they’re more fascinated by is learning the ritual surrounding taste contests and developing the unique ability to determine origin just by the smell and taste.  Harry becomes such an enthusiast that he takes them on a tour of a whisky distillery in the Scottish Highlands, where Albert sees his first Scottish castle in Edinburgh and Robbie learns he has a quality nose, meeting a whisky buyer (Loach veteran Roger Allam) who’s quite impressed.  It’s there they learn that the giant wooden kegs used to cellar whisky, sometimes for decades, lose nearly 2% every year to evaporation, what they call “the angel’s share,” suggesting divine intervention.  Once Robbie returns home, however, there’s someone waiting to pulverize him, usually in small groups carrying heavy weapons, where his life expectancy diminishes day by day.  Loach clearly understands how working-class youth continually get themselves into trouble, but also how they are stigmatized by housing project violence and rampant unemployment, where no one lifts a finger to help alleviate the cause, yet the media rails against these kids every day, blaming them for their own predicament, or for failing to lift themselves out if it, as if by some miracle.  While the British invented kitchen sink realism in the 50’s and 60’s, including Loach’s own POOR COW (1967), expressed with a near documentary feel, here Loach gets under the skin of the working-class mentality through their prolific talent for getting themselves into trouble, expressed so perfectly with heavily satiric, profanity-charged language and absurd humor which takes the edge off the blisteringly accurate portrayal of bleak social realism in the tenement housing projects, where these kid’s hopeless futures are the forgotten souls that have become about as meaningless to the world around them as the deadend lives portrayed in most every Aki Kaurismäki movie.


What Loach finds in this film through that humorous banter and dizzying interaction between characters is a special, indefinable quality that separates humans from other species—personality.  Instead of feeling down and out, as if their lives don’t count, they have a natural affinity for defiance, to literally defy the odds, reflected in the clever kinds of small criminal acts they specialize in, where Robbie gets the idea to utilize the group’s talents to steal an extremely rare batch of recently discovered whisky that is about to be auctioned for over a million pounds.  While the audience knows what they’re up to, they have no idea how they intend to pull it off, turning this into a thrilling road movie as they’re off on yet another misadventure, this time wearing kilts, where the mood of optimism is enhanced by the surging energy of an upbeat theme song about whisky drinking, The Proclaimers - I'm Gonna Be (500 Miles) - YouTube (3:39), which never sounded more perfect.  Witty, hilarious, given a realistic style and a natural spontaneity in the key roles, Loach counteracts the neverending societal drumbeat of dehumanization of working class youth by creating such likeable and sympathetic characters.  It’s not what happens, but the beautifully orchestrated layers of comical complexity written into how it happens that continues to surprise throughout in an audaciously thrilling whisky heist, where the supposed dregs of the earth walk right into the lair of the wealthy and the snobbishly super-elite without attracting suspicion and steal the most precious commodity right underneath their noses.  While poking fun at the pretentiousness of the aristocracy, featuring a real-life “Master of the Quaich,” Charlie MacLean, Loach adds a bit of comic ingenuity by continually exposing our working class heroes to their own special flair for fucking things up, as after all, what they all have in common is getting caught.  The enchanting intrigue of the story never wavers and never resorts to hackneyed stereotype, where the unique dialogue is just so head-splittingly funny throughout, one often forgets how rare it is to experience such an intelligently crafted film as this.  What it lacks in profundity, it makes up for in originality, youthful vibrancy, and the utter joy of being alive, easily one of the most delightful times to be had in a theater all year.  While it is a bit of a fantasy, something of a stretch for a known advocate of social realism, it does feature brilliant writing, unforgettable characters, and the scintillating, profanity-laced dialogue is simply sensational.
Posted by Robert Kennedy at 9:00 AM