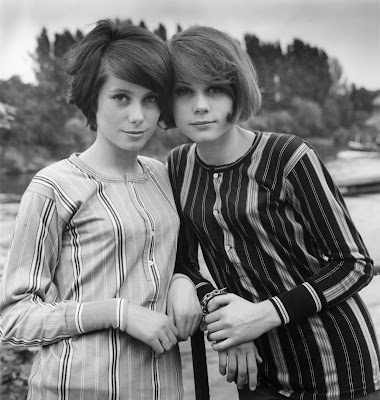 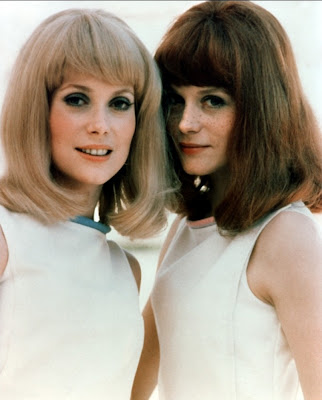 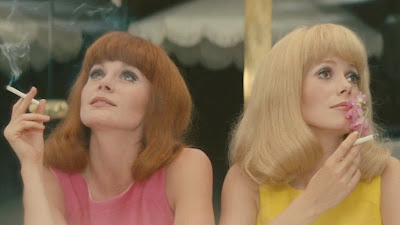 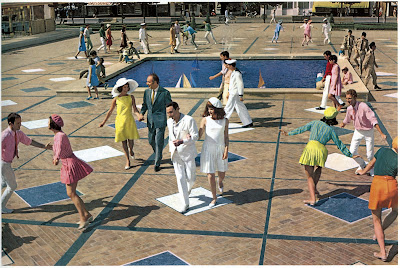 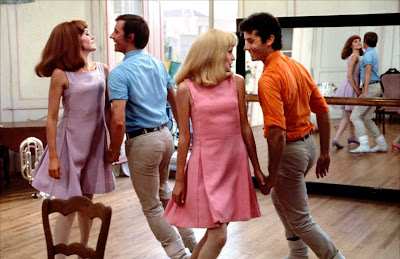 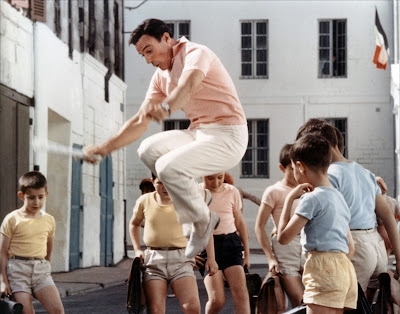 Filmed after the international success of The Umbrellas of Cherbourg (Les Parapluies de Cher... (1964), one of the most lavishly colorful films ever made, where nothing is spoken, everything is sung, this is another Demy musical with Catherine Deneuve, also long unavailable, lovingly restored in 1996 by his widow, Agnès Varda, and a hit in France, the film was originally released in America with an English dubbed version that was so poorly received in 1968 that Demy’s career never recovered.  THE YOUNG GIRLS OF ROCHEFORT centers on, of course, the beautiful young girls, where the main attraction is the adorable sisters, blond Catherine Deneuve and her older sister, red-haired Françoise Dorléac, at ages 24 and 25, both stars from their teens, but this is the only time they worked together onscreen.  Co-starring as singing and dancing twins, culminating in a show-stopping final number together, both wearing glittering, skin-tight, slit-to-the-thigh matching red gowns, inspired by Jane Russell and Marilyn Monroe’s musical duo “Two Little Girls from Little Rock” from GENTLEMEN PREFER BLONDES (1953) Two little girls from little rock video - Tunesbaby.com YouTube (2:40).  Dorléac played Jean-Paul Belmondo’s stubborn girlfriend in Philippe de Broca’s THAT MAN FROM RIO (1964), also Truffaut’s mistress in THE SOFT SKIN (1964), and the young wife in Polanski’s CUL DE SAC (1966) before dying in a car crash the year this film was released.  For years, Deneuve was too distraught about her sister’s death to even discuss her.  Demy originally contemplated using Brigitte Bardot and Audrey Hepburn as the two sisters.  Of note, Bardot was paired successfully with Jeanne Moreau in Louis Malle’s comic revolutionary romp VIVA MARIA! (1965).  Because of Demy’s insistence upon using American singer/dancer Gene Kelly, production had to wait two years until Kelly was free of other commitments, making him 54 at the time of the shoot, yet seeing him effortlessly dancing down the street recalls the vibrancy of AN AMERICAN IN PARIS (1951).  Jacques Perrin also appears as a young sailor and artist who paints his ideal woman without ever actually seeing her, but nonetheless keeps searching for her, looking exactly like Deneuve, though they’ve never met, becoming one of the many missed connections of the film.  One of Perrin’s first acting roles was working with Valerio Zurlini in GIRL WITH A SUITCASE (1961), playing a romantic lead opposite an enthralling Claudia Cardinale, becoming an actor/producer on the Costa-Gavros thriller Z (1969), where more recently he co-directed the sensational bird documentary WINGED MIGRATION (2001).

This film reunites director-writer-lyricist Demy with musical composer Michel Legrand, offering one of their finest and jazziest scores, which plays over an odd combination of spoken dialogue mixed with what appears to be spontaneous moments expressed in song or dance, where characters at random form dancing combinations, seen twirling or spinning down the streets, often dancing or skipping out of the frame, where the streets are alive with continuous dance movements, all decked out in pastel colors, where the intoxicating, lighter-than-air mood of musical fantasia becomes the collective mindset of the movie.   The film was shot on location in the colorful port city of Rochefort, chosen because of its size and its central square where most of the action takes place, where Production Designer Bernard Evein repainted 40,000 square meters of the city’s façades, where the color white has never been more prominently featured and where every fire hydrant was painted a different pastel color, where Demy treats the town of Rochefort as if the city were a set built specifically for him and his movie.  The film takes place over a weekend celebrating the French holiday Fête de la Mer (Festival of the Sea), opening and closing with the arrival and departure of a caravan of trucks, motorcycles and horses, including two American actors, George Chakiris, Bernardo from WEST SIDE STORY (1961) and also Grover Dale, and later Gene Kelly, who choreographs his own dances, seen driving a white convertible, where all arrive on a movable transporter bridge that acts as a drive-on ferry, where cars are seen driving past white clad sailors, white boats, white buildings, men and women dressed in white, until they arrive in the huge white colored city square where the sailors do an improvisational dance in front of the fountains with bright leotarded young girls 『The Young Girls of Rochefort』 Arrival of the Drymen - YouTube (3:34).  Demy’s grand, colorful, and unorthodox approach pays tribute to the American musical, yet mixes in French poetic realism, where dreams and reality coexist, though this may be Demy’s most exhilarating and cheerfully optimistic film, literally bursting with life and joy, a delirious expression where pure emotions are translated into motion and music, the essence and lifeblood of a Hollywood musical.

The look Demy was after owes something equally to French filmmakers Max Ophuls and Jacques Tati, his mentor, where the film specifically recalls the charming allure of Tati’s JOUR DE FÊTE (1949), but also Americans Vincente Minnelli and Stanley Donen, as Demy was a great admirer of the Golden Age of MGM musicals, creating a bliss-drenched realm of pinks and gold, where work is viewed as confining, so characters come alive with a kind of French gaiety that refuses to allow anxiety and distress to interfere with their otherwise sunny lives, where life is always upbeat in heavy anticipation of love and romance, not to mention Deneuve and Dorléac, who always seem to be just around the corner.  One of the many wonders of the film is watching how each of the women carefully selects some outrageously fashionable hat to wear before they show themselves to the world outside, where they literally decorate themselves in matching colors.  Danielle Darrieux, playing the mother to the twin sisters, is the only one of the performers in the film who does all her own singing, while Demy’s real-life wife Agnès Varda can be seen making a cameo as one of the nuns visiting a music shop run by a young Michel Piccoli, seen with dark hair and thick sideburns.  The construction of the film bears an artistic similarity with Hong Kong filmmaker Wong Kar-wai’s CHUNGKING EXPRESS (1994), another film that features an elaborate choreography of near misses, showing ships passing in the night, where key couples continually criss-cross past one another throughout the story, usually just missing one another as they go about their daily routines, so caught up in everyday life to notice what might be waiting for them just around the corner.  This becomes part of the fun of the picture, as lovers meant to be, in the storybook sense, keep missing one another.  Certainly a central theme is the frustration of searching for and just missing romance, where so many of the songs express a lost or missing love, yet they all yearn for that elusive kind of love expressed in Hollywood musicals that doesn’t actually exist in real life, where lost in the façade of candy-colored artificiality is seeing through the dream, where as in all Demy musicals there are dark undertones to all the bright sunniness.  This hyper-expressive, positively enchanting narcotic of a rapturous, over-the-top musical best expresses that idyllic dream of youth (where one can hope, can’t they?), which may never come true, but when we’re young, catching someone’s eye, or observing someone in close quarters, the instantaneous reverie and fantasia of love has been and will always be there in our collective imaginations, dreamily wondering what may happen, or if this is just another one of those missed opportunities.
Posted by Robert Kennedy at 11:29 AM