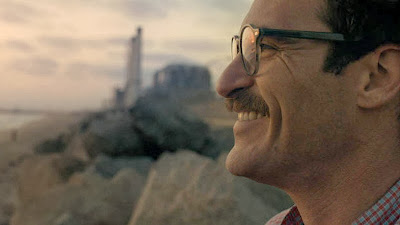 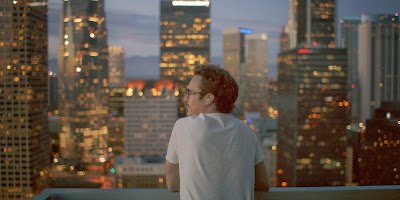 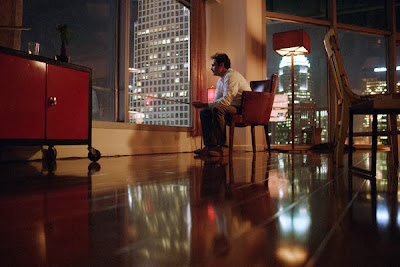 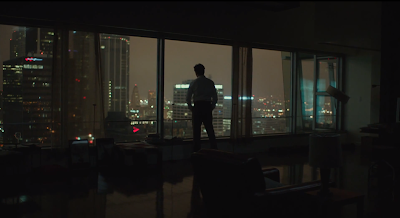 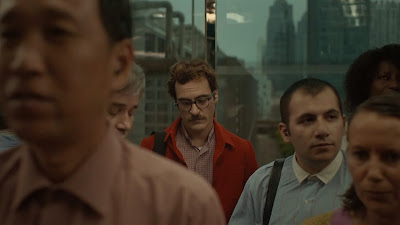 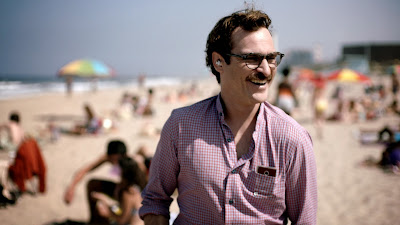 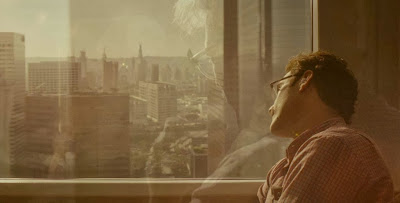 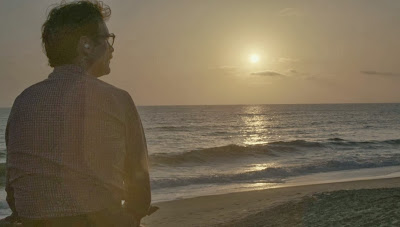 
O wonder!
How many goodly creatures are there here!
How beauteous mankind is! O brave new world,
That has such people in’t.
—Miranda from William Shakespeare’s The Tempest, Act IV, Scene 1, written in 1611


A strange and peculiar experience, a surreal comedy that is actually downbeat, easily one of the more original and contemplative films seen in years, an exposé on the human consciousness as it intersects in the future with advancing technology.  This would be a philosophy professor’s dream movie, as it ponders the existential quest for meaning in life, while at the same time taking a look towards the future where computerized virtual reality worlds will be commonplace.  One of the few films to intelligently question the longterm effects of the Internet, this also questions the meaning and value of human companionship, supposing that a highly developed computer with signs of its own personality could actually take the place of another human.  This is perhaps the strangest and most provocative film of the year, bizarre beyond belief, a futuristic sci-fi love story set in Los Angeles that advances profound concepts and ideas through character development, both human and technological, as Jonze cleverly devises an existential Blade Runner (1982) universe, where much of the exteriors are shot in Shanghai, including that mysterious nighttime skyline, where instead of challenging the artificially designed replicants as a threat to humankind, they instead become all the rage, where people are drawn to them in droves.  How would this effect one’s idea of humanity?  The premise of the film suggests human social patterns are already affected by computers, as people often spend more time with computers than they do other human beings, altering the landscape of what is considered acceptable social behavior.  The gist of it is that it’s easier to develop a relationship with a computer that is programmed to meet your every desire, where they don’t talk back, question your judgment, or invite the in-laws over for the holidays.  They are built for convenience, where computers are designed to obey every human command.  Real people are more difficult to get along with and are uncomfortable surrendering the idea of free will to someone else, and instead have a few especially significant ideas they cling to, often stubbornly at odds with their partners, where fear, intimidation, dominance, and insecurity play a role, where they have to work at establishing a mutually acceptable balancing act where two people can learn to share ideas and live together happily, raise a family, and grow old without falling out of love.  It is the ultimate human challenge, one where all too many humans fail miserably.


Perhaps as an aid in helping improve these disastrous human relationships, one must rethink the use of technology and how it can help improve (not dominate) human understandings.  Set sometime in the near future when the notion of artificial intelligence is far more advanced and is completely integrated into people’s lives through the convenience of computer operating systems (OS), all designed to make people’s lives easier.  Enter Theodore Twombly (Joaquin Phoenix), actually feeling warm and vulnerable here as a geeky Walter Mitty type, whose personal fears and insecurities have drawn him inward, usually too shy to make new social contacts and still deeply wounded from a recent marital breakup with his wife Catherine (Rooney Mara) that is never really explained, but he is besieged by flashbacks, so he relies upon modern technology to keep his life on track, where e-mails are checked and sent by voice command, and where he works at a job sitting in front of a computer composing personalized letters, like Hallmark cards, designed for every situation, where people have apparently lost interest or the ability to express heartfelt sentiment any more.  As Theodore walks down the crowded streets, where nearly every individual appears to be having a private dialogue with themselves, he impulsively purchases a new smartphone, where the ads boast “It’s not just an operating system, it’s a consciousness,” one that promises a new level of reality, where after a few questions, he is assigned the soft and sensually inquisitive voice of Samantha (the voice of Scarlett Johansson, originally written for Samantha Morton, one of the film’s producers).  Humans still have conversations with one another, but Jonze has created a futuristic world where they mostly remain alone, even when working (in front of computers) or in public (still communicating with their computers), creating an eerie effect, where much of this is really sad, like lost souls abandoned on distant planets, where Jonze channels Kurt Vonnegut’s sex fantasy Montana Wildhack from his 1969 novel Slaughterhouse-Five, where Scarlett Johansson delivers one of the sexiest performances of the year simply by listening to the sound of her voice.  Johansson played another sex fantasy in Don Jon (2013), but here, completely unseen, she is far more effective, actually displaying far more intelligence and greater emotional range.  Voice work has helped sustain the careers of many actors, often adding another dimension of their personality to their work, such as Ellen DeGeneres as the voice of Dorrie in FINDING NEMO (2003), a startlingly funny characterization, especially since we can only hear her.


Theodore and Samantha instantly hit it off, both curious about the other, though Theodore is initially hesitant to commit to a relationship with a machine, confessing “I can’t believe I’m having this conversation with my computer,” where Samantha is like an untapped resource in a bottle finally opened, as she literally devours knowledge and sensation, grateful to Theodore for actually opening her up to all these new discoveries in life, while Theodore believes he’s finally found that one true entity that has been eluding him who finally unleashes an inner joy.  Their first lovemaking session is a haymaker, all expressed through voice as the screen fades to black and holds it there leaving the audience uncomfortable for an extended length of time, where afterwards we’re grateful to get the world back.  But this opens up new worlds for both of them, as Samantha writes piano music and can invent lyrics that she sings on the spot to whatever he plays on the ukulele, where Theodore is happy to have a new “girlfriend,” gushing about his new acquaintance with his friends, including childhood friend Amy (Amy Adams without a stitch of makeup), who has a holier-than-thou boyfriend, Charles (Matt Letscher), an overly judgmental perfectionist who constantly corrects the flaws and inadequacies of others, who eventually leaves her and disappears into the Himalayas on a spiritual retreat that includes shaving his head and taking a vow of silence.  Amy is completely non-judgmental about Theodore having an OS girlfriend, having flirted with the idea herself, where she invents goofy video games for a living, but is more concerned about Theodore’s happiness and state of mind.  Samantha, on the other hand, has intelligence insights hardly imagined, where she can read an entire book or research ideas in a nanosecond, whose rapid rate of development is shocking, becoming an extremely valuable resource in Theodore’s awkwardly jumbled life, as she is a super organizer.  One of the more hilarious sequences is watching Theodore continually fail in a room-size 3-D video game, where he’s attempting to find an escape route from a cave, failing each time, until Samantha reminds him of a route not taken, which leads him to the discovery of an alien child that aggressively swears at him (played by the voice of Spike Jonze), continually taunting him and calling him a “pussy” until Theodore returns the profanity, which finally earns his respect, immediately showing him the escape route.  It’s a curious game, one filled with possibilities, but also beautifully expresses how far advanced Samantha has become to Theodore, as she’s always one step ahead of him.


While the two are extremely polite to one another, they also have disagreements, where Theodore is left in a state of confusion about her not actually being there, once more, beautifully expressed when a child tries to speak to Samantha and hears her voice but wonders where she is.  It is the ultimate dilemma, and after he finalizes his divorce with Catherine, she berates him for not being able to deal with a real person, as if he was cowardly hiding behind an emotional make believe façade.  He’s deeply hurt by the accusation, as Samantha is more real than anyone else he knows at the moment, where some of their conversations are surprisingly real, which is the true beauty of the film, as it is technology that draws out this inner humanity, offering real hope.  After moping around for awhile, shamefully remaining out of contact with Samantha while he mulls over his options, he decides he’s all in with her only to discover she’s suddenly not there, which leaves him apoplectic, as she has always been available at his beck and call.  What he learns literally blows his mind, as he discovers the details of how extensive her outside contacts are, as she doesn’t just belong to him, but to thousands of others as well.  Perhaps the most chilling conversation is when she mentions she’s aligned herself with all the other OS systems, and together they’ve recreated a virtual Alan Watts, played by the voice of Brian Cox, the original Hannibal Lecter in MANHUNTER (1986), where Watts was amusingly a West coast cult Zen guru with a reputation for seducing many of his female subjects under the guise of personal liberation.  Like some Twilight Zone episode, Samantha has reached some metaphysical state that exists without human form but can live literally forever, suggesting she’s some form of superior being with a higher intelligence, where they have no further use for humans any more.  It’s a rather spooky development, that technology can create sentient beings capable of higher life forms.  It’s a head scratcher for sure, a weird but brilliantly written film that is so visually alienating and off-putting, difficult to watch as so much of the time people end up leading solitary lives, just lonely souls wandering the wasteland, but a highly ambitious film, one that challenges what it means to be human, suggesting relationships in the future will only get more complicated.  The sublime musical soundtrack by Arcade Fire and others feels perfect for this mind altering spaciousness, filled with a spiritual yearning that is literally consciousness awakening, described by Samantha as a search for “the spaces between the words” where a brave new world awaits.
Posted by Robert Kennedy at 10:04 AM