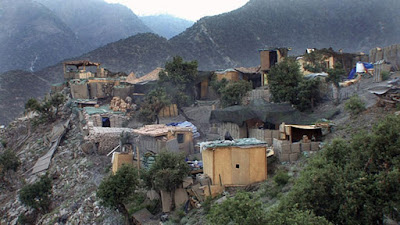 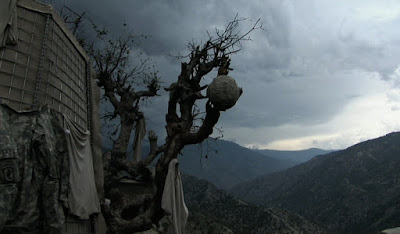 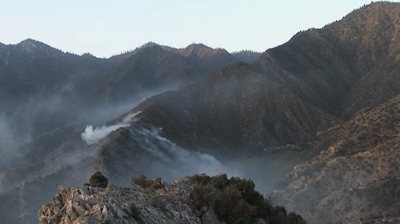 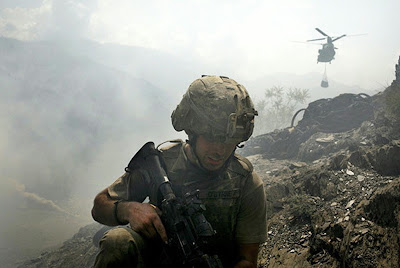 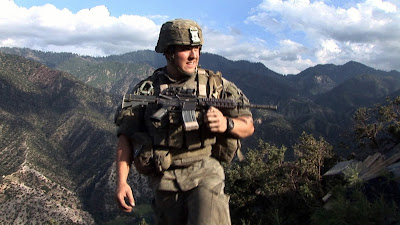 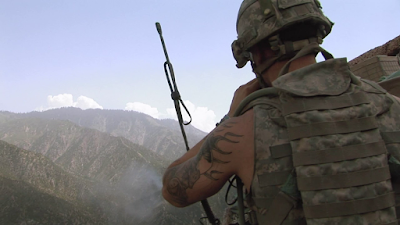 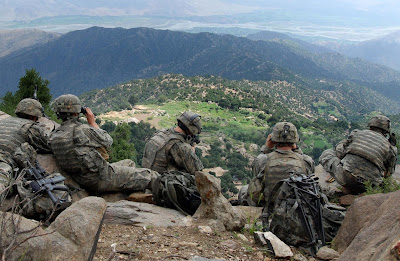 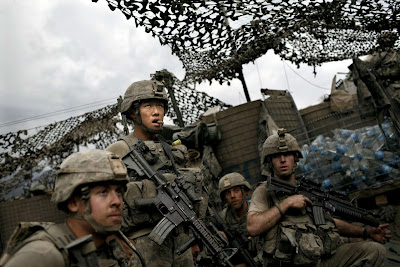 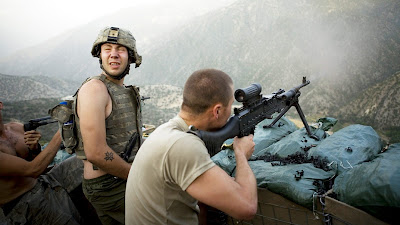 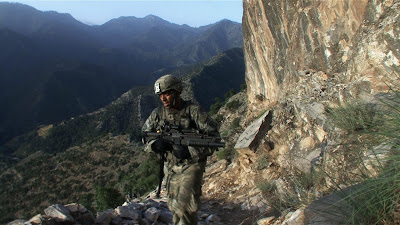 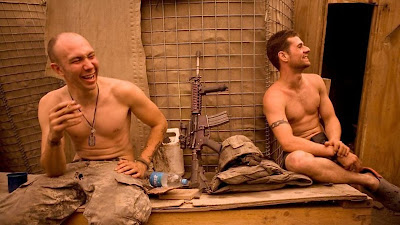 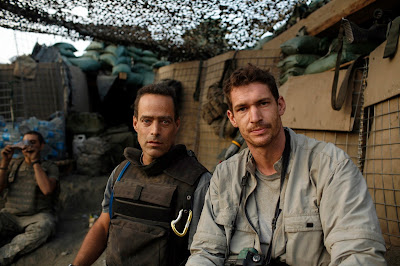 Where the road ends is where the Taliban begins.      —Captain Dan Kearney

This appears to be a film that picks up right where The Hurt Locker (2008), a work of fiction, left off, opening with giggly and extremely confident soldiers ready for combat on a flight over into Eastern Afghanistan bordering Pakistan, which may as well be another world altogether, as their assignment is into a base camp in the Korengal Valley, which is surrounded on all sides by higher mountains, making them easy targets, where one of them says it’s like “sitting ducks.”  This one region is responsible for 70% of all the ammunition ordinance used in the entire Afghan war, so soldiers here get their money’s worth.  As anticipation sets in, soldiers express their thoughts directly to the handheld cameras of photojournalist Tim Hetherington and writer Sebastian Junger who were embedded with the troops in a 15-month deployment by Battle Company’s Second Platoon of the 173rd Airborne Brigade beginning in 2007, which is pushed to the limit of a safety zone, as everything on the other side for as far as you can see is unchartered, enemy territory.  This immediately brings to mind Valerio Zurlini’s film THE DESERT OF THE TARTARS (1976) about the relentless psychological torment from an outpost on the edge of nowhere where an isolated platoon sits awaiting the threat of attack from an unseen enemy.  But here the compound itself is already under relentless attack, as from the outset, they have to face the reality of 6 to 8 firefights per day, with bullets raining down on them potentially from all sides, where one soldier on an adrenaline high screams out that he loves to get shot at, that it’s “better than crack.”  One of the eerie aspects of war is that you rarely if ever see the face of the enemy, and only on rare occurrences are you aware of what you hit.  Most often you’re firing in the direction of incoming rounds hoping to put a quick stop to the threat.  Within the opening minutes of the film, soldiers are hit and killed.  We don’t see it, but we hear the exasperated reaction of their fellow troops who are devastated by the loss.  To a man, their thoughts are that they will most likely never get out of there alive, that this is the end of the line for them.

Under cover of darkness, they send a helicopter into one of the high grounds that has been causing the most damage, where a small group of soldiers dig in a temporary fortification, which is followed by a hail of gunfire, but through persistence and hard work they hold their position, eventually adding more provisions, but never more than about 15 men who remain in a precarious position, as it is too far away from the compound to receive any immediate assistance.  They name this new outpost after their fallen soldier, Camp Restrepo.  Throughout the film, there are recollections of this man, including a guitar player who recalls how uncannily talented a player he was, as all apparently identified with him in a very short period of time.  The film does an excellent job identifying with the soldiers, showing them in close quarters, continually exposed to the enemy, where their skills must be extraordinary just to survive.  What’s remarkable about this film is there is no plot, no story, no spin doctoring, and no commentary to describe the action.  What we see onscreen is the action, where soldiers know at any moment that they could be killed, so their focus level is indescribable.  Despite the raised intensity and unvarnished verité skill of the filmmakers, who themselves do not hesitate to volunteer for the most dangerous missions, it’s hard to grasp just what the purpose of these missions are.  So when gunshots are heard or a cloud of smoke is seen, without ever seeing the enemy, it’s frustratingly difficult to know just what’s happening.  This confusion leads to an exasperated audience, as while the footage is authentic as hell, where the camera instantaneously loses its direction from an incoming round, pointing skyward to the heavens as the operator runs behind a vehicle or a protective wall, and where the instinct to protect oneself comes through loud and clear, we never really understand what they ever intended to accomplish in the first place.  Using soldiers as guinea pigs, drawing the enemy to this spot and then going toe to toe with them, engaging in firefights across the border at whoever fires upon them seems like a wildly optimistic military plan.  The soldiers themselves are under no illusions, so the adrenaline to kill as many of “the bad guys” as possible is their sole game plan, as there’s too few of them and they’re not in a position to take the battle to the enemy, as Pakistan, like Cambodia during the Vietnam War, is supposedly off limits except for special forces.

In a peace building gesture, there are weekly meetings called shuras between the local Afghani village elders and the military brass, where the officers attempt to persuade the elders to cooperate by pointing out the enemy.  In return, American military personnel are building roads that never existed before and are improving the quality of life in the region, including hospitals and needed jobs where none existed.  But their attempts to establish credibility fails to make a dent with the centuries-old liaisons that already exist in the region, knowing the elders will live there permanently while the Americans are mere visitors.  Nonetheless, these attempts sound shallow and a bit ridiculous, as the elders could care less, knowing to do what the Americans ask would cost them their lives.  They’re more interested in receiving American dollars, which are off the bargaining table.  Camp Restrepo seems to have turned the tide somewhat, as its elevated vantage point has minimized the damage of incoming fire, which leads to Operation Rock Avalanche, a more adventurous and decidedly more dangerous mission, where they are dropped directly into enemy territory in an attempt to take the battle directly to the enemy, rooting out safe spots and discovering ammunition storage sites.  But as soon as they engage in battle, which is described by the soldiers after they have safely returned, only innocent civilians, including small children, are caught in the line of fire.  Even as the military is approaching a housing compound, there is no attempt to remove the civilians, so their venture backfires, as Americans will forever be blamed for their losses.  Even worse, one is air-lifted out of there seriously wounded while they lose another one of the most battle hardened soldiers, the kind of guy they all look up to, which has tragic and demoralizing consequences.  There is a shudder of emotion as they describe this moment, the most haunting in the film, as never were they more stripped bare and vulnerable than at that moment, which exposes the fear and absolute dread of battle.  One medic describes how he can never sleep anymore, even with sleeping pills, as he dreads the recurring nightmares that await him, reminding him of what he’d seen.  This is truly another BURDEN OF DREAMS (1982), where the horror of this moment is followed by a quick cut to a soldier dance-off, where the sensuous techno trash dance music of “Touch Me (I Want To Feel Your Body),” Samantha Fox Touch Me I Want To Feel Your Body - YouTube (3:42), comes earth-shakingly alive under these harrowing circumstances, where it becomes impossible to understand how any of them could ever live in the real world again after this experience, suggesting the film, through its haunting, fragmented images, successfully captures the horror of war, even as it insanely proves how futile even the best efforts and intentions become.


Photojournalist and co-director Tim Hetherington, a British national, was killed at the age of 41 on April 20, 2011 after being hit by flying shrapnel from Gaddafi troops in Misrata, Libya, where he bled to death on the way to the hospital, dying just minutes away.  Named world press photographer of the year four times and an Oscar nominee, Hetherington was one of the most respected members of his profession.  In his relentless pursuit of capturing some of the most disturbing events of the past decade, Hetherington was covering the Libyan rebels, where he had just captured a series of images where over 60 people, including 85 civilians, were reported killed, with thousands more injured since the city came under siege seven weeks earlier.  Hetherington often placed himself in some of the world’s most dangerous battle zones, where he was caught in a mortar attack while returning from a bitterly-contested thoroughfare on the town’s dangerous Tripoli Highway.  Also killed at the scene was American journalist Chris Hondros.
Posted by Robert Kennedy at 12:14 AM