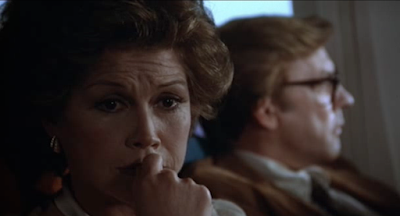 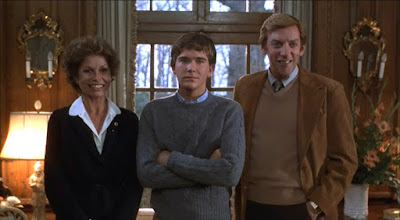 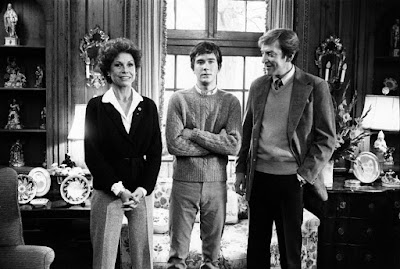 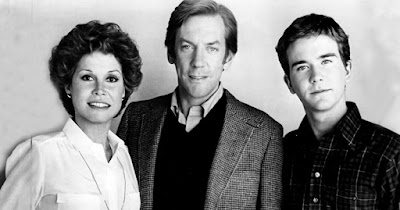 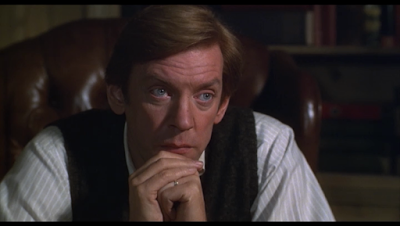 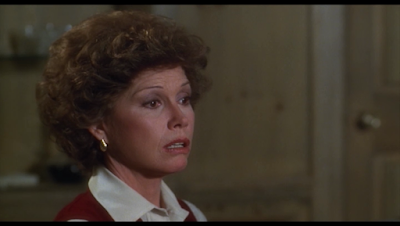 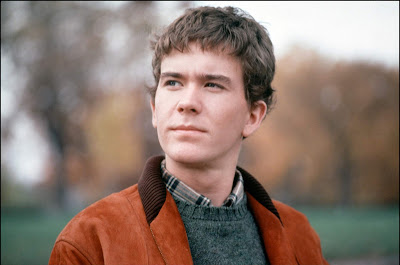 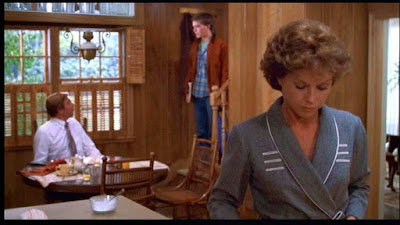 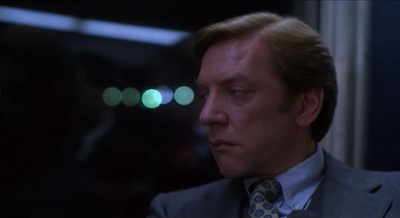 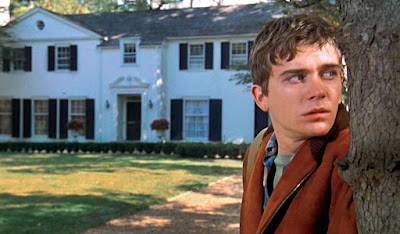 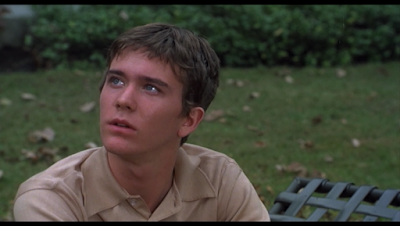 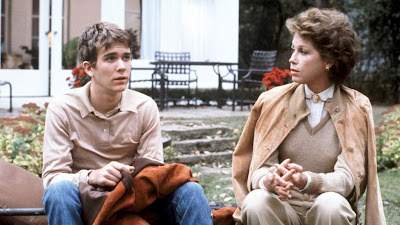 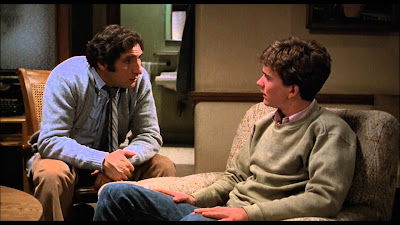 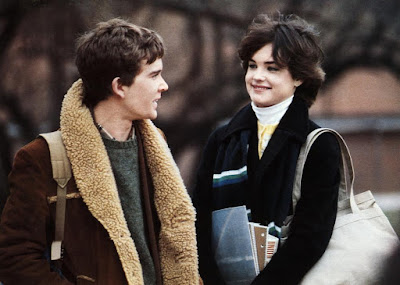 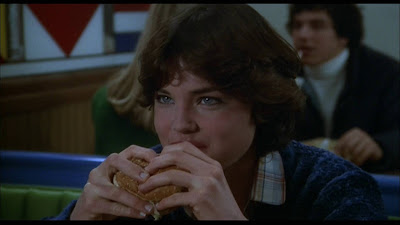 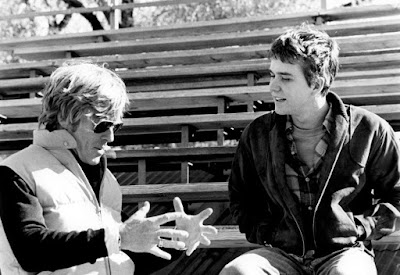 director Robert Redford on the set with Timothy Hutton 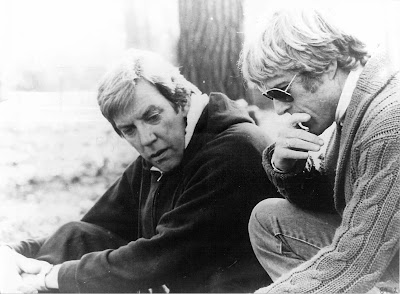 Redford on the set with Donald Sutherland 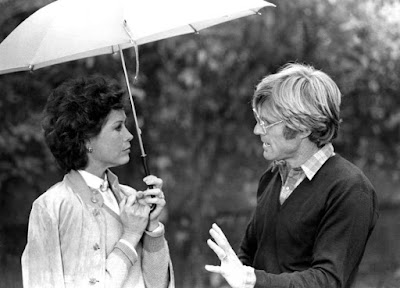 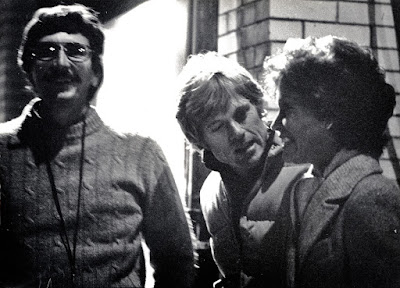 It’s hard to make an audience care about elitist people growing up in the rich, lily white suburbs who seemingly have all the advantages, an immense, luxurious estate, a steady stream of maid service, vacations in Europe, exclusive schools, college to the school of their kid’s choice, no matter how expensive, parents invited to all the important social gatherings, where it’s hard for them to discover that emotionally, they’re still people, just like anyone else.  When they’re cut, they bleed.  This film shows that no matter what advantages they’ve had, and whatever therapy they can afford, they’re still unprepared to deal with the grief of losing a child.  It’s simply an indescribable horror that would bring any family to their knees.  This film is about that day of reckoning, and begins months after the event when the older, more favored son drowned in a boating accident, while the younger son survived, but it led to a suicide attempt, followed by four months in a psychiatric hospital.  All this happens prior to the beginning of the film, when the son Conrad (Timothy Hutton) has quietly returned to high school and rejoined his former place on the swim team and in the school chorus.  Life goes on.  But Conrad is still haunted by the incident, feeling guilty that he survived when his brother didn’t, and it seems to have taken all the air out of him, where his strength has simply disappeared.  He’s not pleased with his performance on the swim team, his father (Donald Sutherland) seems to be hovering over his every move, while his mother (Mary Tyler Moore) has never felt more distant.

It’s interesting that Moore and Sutherland are playing against type, as usually Sutherland is remarkably adept at playing demented characters living on the other edge of sanity, see Don't Look Now (1973) or Bertolucci’s 5-hour historical epic 1900 (1976), while Mary Tyler Moore is the picture perfect image of a contented housewife from all those years on the Dick Van Dyke Show (1961 – 1966) and the Mary Tyler Moore Show (1970 – 1977), both huge successes which established her wonderful combination of warmth and comic timing, where if anything, her character always exhibited signs of good common sense.  Not so here, as her way of dealing with the family’s grief is to continually change the subject, even with her own family members.  It’s gotten so bad that Conrad can’t even speak to her anymore, as there’s little else he feels like talking about.  Her idea of “dealing with it” is putting it in the past and moving on, suggesting she and her husband Christmas in London this year, that it would be good for them while Conrad can sit home and attend therapy sessions with his new therapist (Judd Hirsch).  They end up going on a golfing vacation instead, which is her way of dealing with potentially losing yet another son, this time from emotional neglect.  Moore is something of a monster in this film, as she believes it’s her role as a good upstanding socialite wife to put up a good appearance and brave her way through her family’s difficulties, claiming it’s no one else’s business, reminiscent of how the Kennedy clan handled the aftermath of the Presidential assassination, also including bouts with alcohol treatment, mental illness, as well as Chappaquiddick.  The upper crust elite establishment are bred to believe they should always show a façade, a prime example being the Queen of England or Winston Churchill during the war, putting up a stiff upper lip and demonstrate courage under fire.  They’re raised to believe showing feelings is a weakness.

The problem here is that Conrad is crumbling under that weakness, as other than his therapist, he has no one else to talk to.  Things aren’t as bad as they seem, as he does have a friend from the hospital, but she seems to be recovering more successfully than he is, and there is a girl in the chorus who has taken a special interest in him, Elizabeth McGovern in her first movie role, who couldn’t be more naturalistically open and honest with him, exactly what the doctor ordered, but he’s in too much of a funk to see.  Sutherland is an easy going, get-along kind of guy who tries to befriend everyone, who’s never said an unkind word about anyone, and who probably thought at one time in his life that he was the luckiest guy in the world.  But after they lost their son, the one his wife bestowed all her love and affections upon, there seems to be nothing left now for anyone else.  The well has run dry.  Now it’s all about keeping up appearances.  There is, of course, dramatic heft to this ultimately moving piece, as the actors demonstrate a familiarity with this frigid, emotionally empty territory, and everyone involved has powerful scenes.  One outstanding personal moment shows Conrad after quitting the swim team, which takes some courage, by the way, and meets up with the former teammates after they’ve lost a meet.  After getting into a senseless fight with the air-headed Alpha male of the group (Adam Baldwin), which proves nothing, a friend steps into his car and tries to be a friend, saying he misses his brother as much as anyone, as the three of them used to pal around all the time, but Conrad can’t handle his friendship as it causes him too much pain, and then drives off alone into his own existential fog of endless anguish.  This pretty much describes the dark mood of the entire film, where there isn’t an ending or a solution so much as there is a quiet release.

What this film is known for is winning the Academy Award for Best Picture over one of Martin Scorsese’s best films, RAGING BULL (1980), which has easily surpassed this film in terms of cinematic significance, while Redford directing his first picture won Best Director as well, which was a real crime, as Scorsese’s film is brilliantly inventive throughout.  Family dysfunction was not openly discussed when this film was released, so it was an eye opener at the time, and while the film continues to pack a punch, still touting exquisite dramatic performances, Redford’s direction is sufficiently solid but unspectacular.  This is a fairly straightforward chamber drama that is unfortunately broken down into a black and white world of good and bad characters, not nearly as memorable as, say Mike Nichols direction of Who's Afraid of Virginia Woolf? (1966).  It does bear some resemblance to Ingmar Bergman’s CRIES AND WHISPERS (1972), an exquisitely directed chamber drama about another wealthy family’s inability to love and show affection to a dying sibling, as the filthy rich were raised so that they never had to actually do anything in their lives except pay to have others perform whatever services they need.  In that case, it’s the family nurse that holds and cuddles and actually caresses the dying sister until her death while the others pretty much stand around looking like wallpaper.  So cinema had certainly taken up this subject before, but not so in American films apparently, especially when there are no easy answers at the end, no happy ending, no easy road to recovery.  The film suggests there will be plenty more sleepless nights, which by itself makes this a genuinely honest and candid look at the trauma of clinical depression and the havoc it plays in our lives.  Families of returning soldiers, dead, maimed, or psychologically altered, deal with this kind of thing all the time but the public rarely sees it, even when it’s the family living next door or across the street.
Posted by Robert Kennedy at 12:02 AM