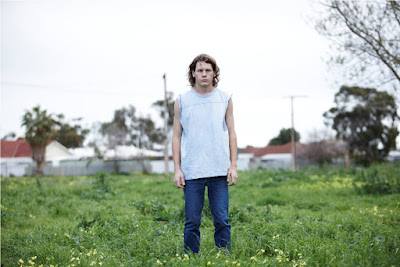 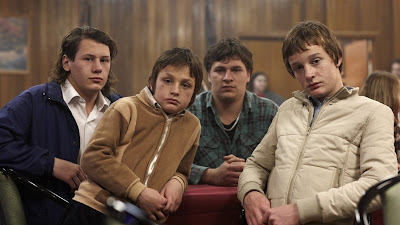 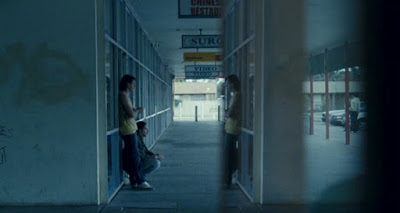 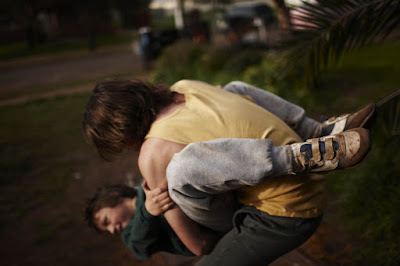 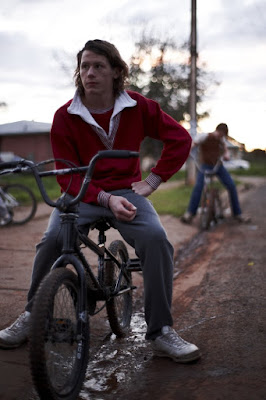 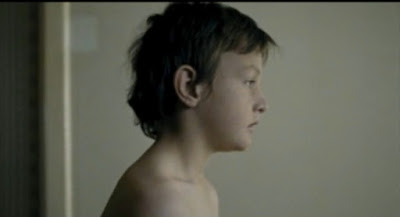 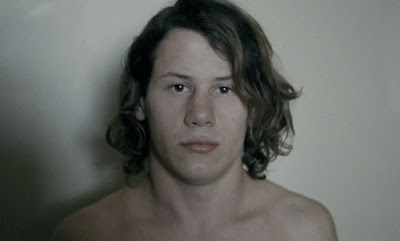 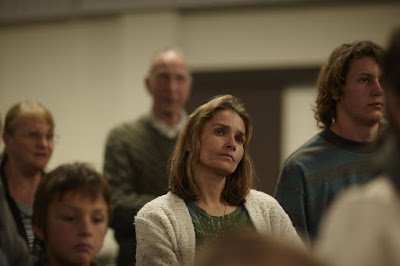 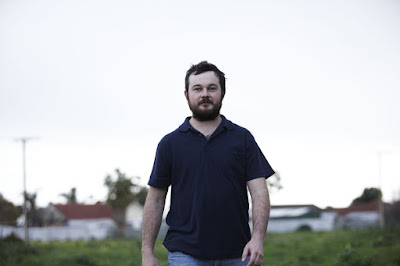 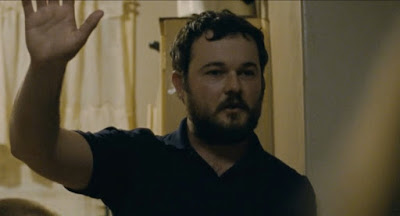 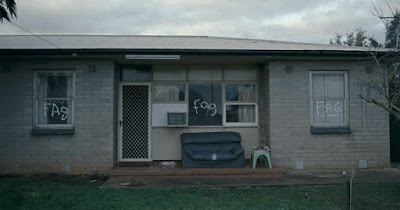 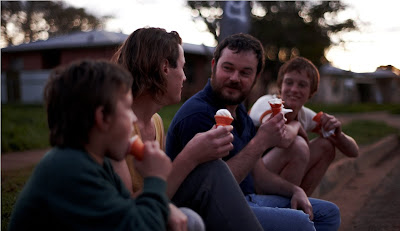 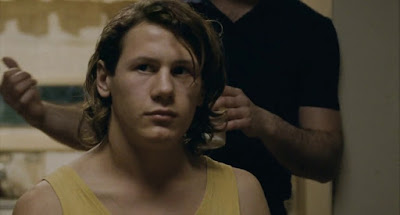 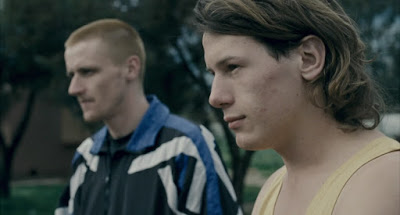 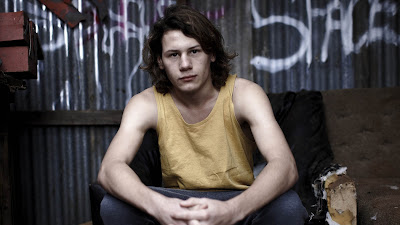 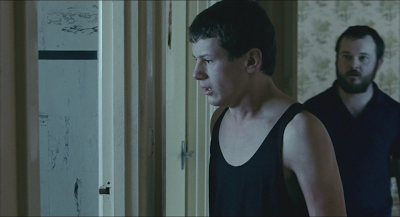 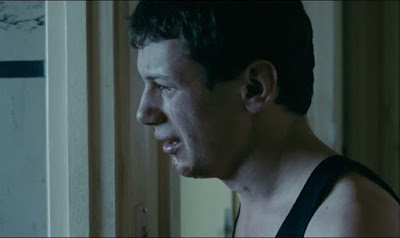 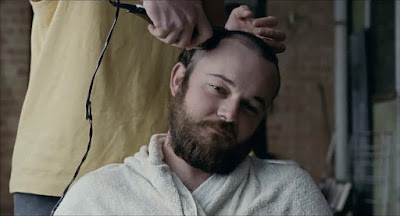 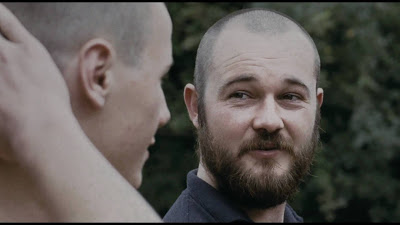 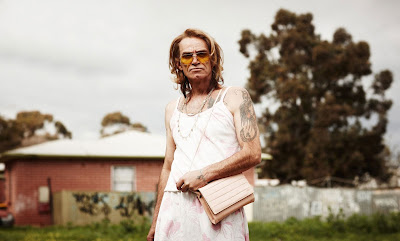 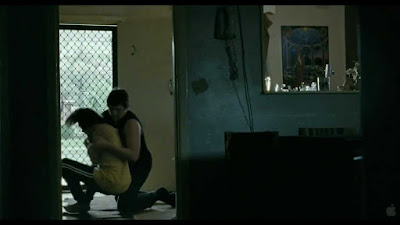 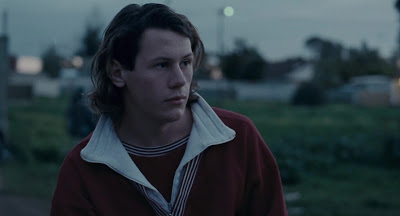 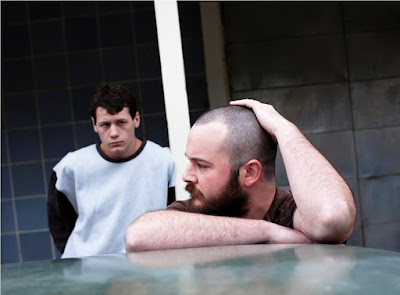 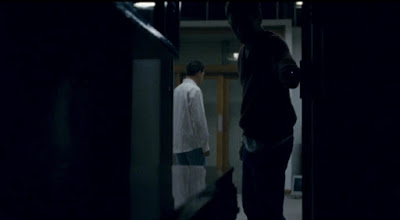 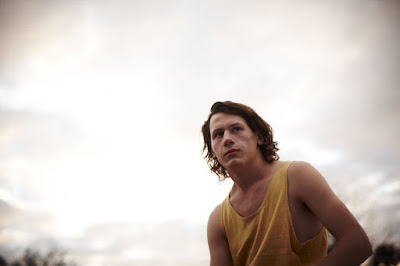 The ultimate in trailer trash movies, where this film lives and breathes the depravity of the impoverished lower class, not the least of which includes some rather crazy notions about exacting revenge for alleged wrong-doers, specifically pedophiles, drug addicts, and gays, who are seen as the ultimate sinners and the scourge of the earth.  Bordering on the fanatical, this is a film of raging, out of control male hormones, where similar to Todd Field’s LITTLE CHILDREN (2006), this neighborhood watch group also has a specific anti-pedophile agenda, but their way of handling it is decisively different, wiping them off the face of the earth.  Based on true events, this is a graphically raw and crude depiction of sadistically gruesome events literally pulled from the headlines, adapted by the director and screenwriter Shaun Grant, combining Debi Marshall’s book Killing for Pleasure with Andrew McGarry’s The Snowtown Murders, telling the story of John Bunting (Daniel Henshall, terrific as the only experienced actor), Australia’s most notorious serial killer who went on a 1990’s killing spree, where a sad and cruel event leads to a supreme overreaction, where one family’s lives are literally taken over by a raving lunatic on the loose who prides himself in ridding the earth of its lowest scum, using supremely horrifying methods to carry out his apocryphal Revelations.  While most filmmakers eliminate onscreen depictions of nauseatingly brutal violence, this director unsparingly provides every graphic detail.  On the other hand, while most filmmakers attempt to provide narrative clarity, Kurzel prefers to alter the sequence of events and intentionally leave out narrative detail, like the connecting tissue that explains how all this comes together in the first place, or the driving force behind these heinous acts, where by the end we barely even know who some of these guys are.  What is clear from the opening few seconds of the film is that this first time director has a way of providing emphasis, where the pulsating beat of the adrenal rush in the opening sequence has a way of generating anticipation while synchronizing the audience heartbeats.  The director’s brother, Jed Kurzel, the guitarist and vocalist for the Australian rock band The Mess Hall, writes the jarring musical score.

Using mostly non-professionals from the northern Adelaide suburbs, this is a seriously grim psychological horror story with torture sequences that could send the unprepared streaming for the exits, where one can certainly question the inclusion of such gruesome detail, especially since so many other details are merely suggested and never spelled out, but this is not exploitive torture porn that sensationalizes explicit gore, instead the direction for the most part is actually restrained.  While the pervasive atmosphere is drenched in an unsettling layer of bleak despair, the director’s approach is an accumulative build up of meticulous detail, utilizing a relentless sense of detachment, so that when horrors occur, they are a natural byproduct of the inhumanity already inhabiting this mercilessly harsh world.  The squalid neighborhood seems littered by stray children with nowhere to go, who aimlessly ride their bikes in circles, where the everpresent eyesore of collected junk inhabiting these tiny back yards surrounded by corrugated fences offers a claustrophobic feel of confined space.  Jamie (Lucas Pittway) has that dreary-eyed look of a bored 16-year old teenager who will never amount to much, never setting his sights on anything, who along with his two young brothers comprise the brood of “the boys,” raised by a single mom (Louise Harris) who always appears harried and worn out from continually looking after them.  What anyone does for income throughout the film remains unclear, but no one is ever seen getting up in the morning and heading for work.  Nonetheless, there is food on the table and appreciative hungry boys who politely thank their mom.  All that is about to soon change, where the mom goes ballistic on the neighbor across the street when she learns what he did to her “boys,” taking semi-nude pictures of them and posting photos on the Internet, which brings an odd assortment of weird and demented characters into the home, led by the ever-smiling face of John Bunting, a charismatic, all-embracing spirit who has a way of filling a void with boys, providing the father figure influence they never had.

How this guy weasels his way into the family is never known, as he arrives out of nowhere and literally takes over, never once seen spending time with the mother, as he instead surrounds himself with a bunch of derelicts from the neighborhood who continually mouth off against the kind of perverts and other riff raff that they continually have to deal with, literally a self-help course on hate and bigotry and how to set your prejudices free, embracing all the pent-up anger and bitterness, taking the ever sullen Jamie by his side and giving him a refresher course on how to fight back.  Starting with the neighbor across the street, but continually expanding their role, Bunting provides vigilante justice, Australian-style, where these guys think eradicating the neighborhood of the punks and lowlifes is doing the country a favor, where someone ought to give them a medal.  Shown largely through Jamie’s ever listless point of view, the only emotion he’s familiar with is indifference, but Bunting tries to instill in him a revengeful rage, showing how he can get back at an older brother living with his father who has continually bullied and molested him, leaving Jamie at his core an empty shell of a human being.  Bunting’s methods are sadistically unorthodox, but to the point, the kind of strong-armed, neo-Nazi behavior that simply shifts the power of the bully, putting the shoe on the other foot, becoming the neighborhood enforcer, and taking an inordinate amount of pleasure in his methods, eventually enjoying killing for killing’s sake.  This radical shift in personal demeanor from ordinary guy to maniac serial killer is a stunning turn of events and the centerpiece of the film, sure to catch the audience off guard, as even though we may suspect something dark and hidden in his nature, no one would suspect a descent into such sinister madness as this, so cold-bloodedly calculated, as Snowtown is a town 90 miles away where in an abandoned bank vault Bunting disposes several of the bodies in barrels of acid.  The pervasive tone of the film is all about control, how society has lost it, how Bunting attempts to reclaim it, but then goes overboard, unable to suppress his basest instincts, becoming a human predator where the audience begins to dread his every move.  This is a shockingly different kind of horror film, one that unleashes the enemy within, but also a film you can’t get too close to, leaving plenty of unanswered questions, particularly Jamie’s chilling transformation from a traumatized witness to a reluctant accomplice, but also the director’s motives, where Kurzel clearly relishes overpowering the audience, perhaps taking a bit too much pleasure in the gruesome detail, 2011 winner of the FIPRESCI Prize at Cannes.
Posted by Robert Kennedy at 12:05 AM