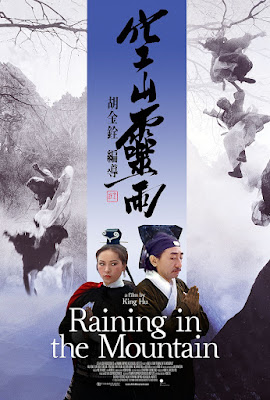 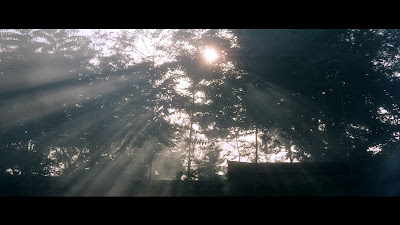 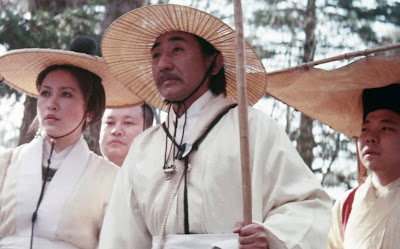 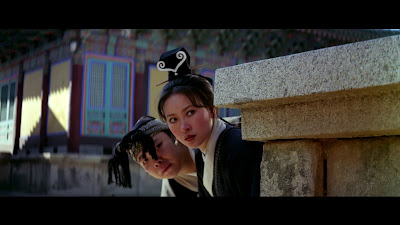 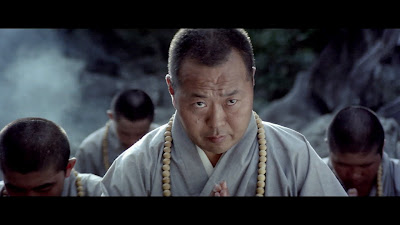 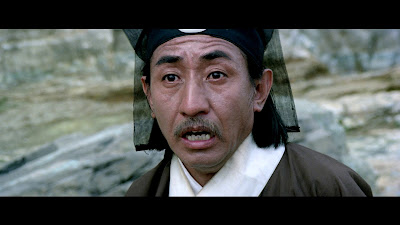 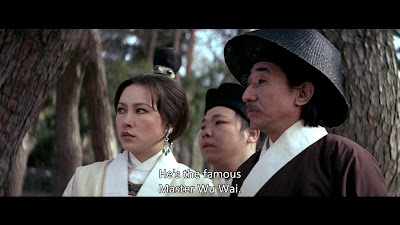 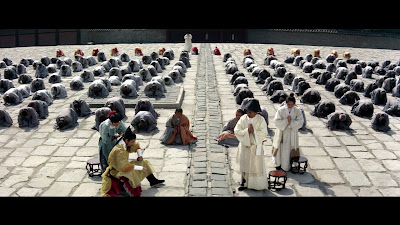 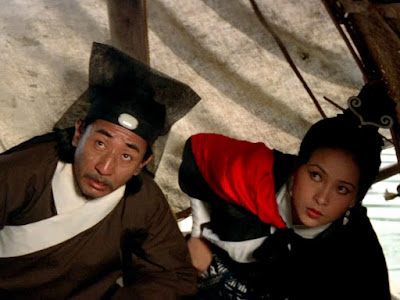 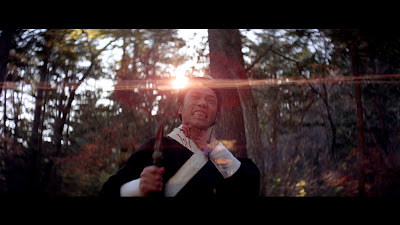 In this film Hu asserts himself as the screenwriter, director, producer, art director, and editor, thus ensuring a high degree of authorial control over the total visual design of the film while imparting a calculated display of cultural and historical scholarship.  In many ways Hu’s own preoccupation with Chinese culture partly arose out of a confrontation with the growing popularity of Japan’s cultural assertiveness, with the rise in popularity of artists such as Kurosawa or Mizoguchi, which largely increased once the postwar American occupation of Japan eased in determining the dictates of film content and subject matter, allowing artists a fuller range of expression.  Hu nearly leaves the wuxia genre behind altogether in this more austere film, shot concurrently in Korea with the similarly-titled but quite different LEGEND OF THE MOUNTAIN, both released in 1979, as there’s barely any action at all, appearing only at the end.  Instead Hu seems fascinated with the location, remarkably photographed in Scope by Henry Chan, choosing a sprawling 8th century Bulguksa Buddhist temple set in the mountains.  Set during the Ming Dynasty, the magisterial opening is a long, drawn-out pilgrimage to a faraway place, involving extensive walking through a great distance, from the flatlands to the trees, featuring picturesque shots through craggy tree branches, or sunlight wafting through the trees, or foggy mists hovering over the hills, leading up into the mountains in a precarious climb, but as they approach the monastery, the remote Three Treasures Temple, they are greeted by one of the monks who escorts them into the grounds, passing what seems like an endless variety of buildings and climbing up a gazillion stairs, where the spaciousness of the place is epic and grandiose, only to have to walk even farther before finally reaching their accommodations, a spare yet unassuming room on the grounds, revealing the identities of a wealthy aristocrat merchant known as Esquire Wen (Sun Yueh) and his concubine White Fox (Hsu Feng), accompanied by her sidekick Gold Lock (Wu Ming-Tsai) disguised as a servant.  Yet she and Gold Lock immediately scamper around the maze-like grounds in search of a mysterious ancient scroll, as the two sneak, hide, and leap over walls, running and leaping about to evade detection, past hidden alleys and sloping roofs, where you’d think they’d be physically exhausted just arriving to such a remote destination on foot, yet the pair is a bundle of untapped energy.  The surprise here is that this turns out to be a heist film, with people scurrying around all the time spying on others, getting into other people’s business and trying to get the upper hand, yet it takes place at a Buddhist monastery where ethics are supposedly beyond reproach, yet everyone’s seemingly plotting nefarious activities.  High end production values with a low end story, this could be a plot for a Marx Brothers movie, as it’s a lot of talk seemingly about nothing, with misdirection everywhere.  To celebrate one hundred years of Chinese cinema, the Hong Kong Film Awards released a list of The Best 100 Chinese Motion Pictures, with this listed at #59, Hong Kong Film Awards' List of The Best 100 Chinese Motion.

Also arriving to the temple is General Wang (Tien Feng), the governor of the district, and his police chief associate, Lieutenant Chang Cheng (Chen Hui-Lou), who immediately recognizes White Fox as a notorious master thief, so he follows her, attempting to disrupt and thwart her plans.  Both of the distinguished men are outsiders that have been sent for by the aging Abbot (Chin Chang-ken) as advisors and asked to help mediate his choice for a successor.  Both Wen and the General have their own designs on who should be chosen, having carefully established back channel contacts within the monastery through the years, both hoping to get their hands on the sacred Mahayana Sutra scroll of Tripitaka, a priceless relic with undreamed of value.  White Fox was brought here specifically to steal the document, as was Lieutenant Chang Cheng, and both counter each other’s stealthy moves for the duration of the movie, spying, plotting, and outmaneuvering the other, becoming repetitious and somewhat ridiculous after a while, bordering on a farce, turning into a comedy of errors routine.  In this film, characters run around a lot, athletically and acrobatically getting into forbidden locations, keeping out of sight, with Hu constructing a series of long, habitual rhythms that continuously reoccur, like a cycle of life montage.  Yet making matters worse is the arrival of Master Wu Wai (Wu Chia-hsiang), a layman with an expert knowledge of Buddhism, who is followed by an entourage of beautiful young women, outrageously conducting an outdoor prayer session while the women bathe in the nearby waters, an obvious distraction even to some of the monks.  While ostensibly grounded in Buddhist tradition, following meditative contemplation rituals from centuries old practices, this offers a behind-the-scenes glimpse of how prominently greed and corruption have infiltrated the holy grounds, offering a scathing portrait of devious monks resorting to the same nefarious activities that take place on the outside, sneaking off to buy things from local merchants that feed their own personal desires, ambitiously vying for power through unscrupulous practices, underlying the reputation of the monastery, exacerbated further by constant complaints from the disgruntled monks.  In terms of the Abbot’s succession, one of the higher ranking monks Hui Wen (Lu Chan) has agreed to give Wen the prized manuscript if he is selected, while General Wang has a similar agreement with Hui Tung (Shih Chun), though the disciple spending the most time at the Abbot’s side is the implacable figure of Hui Ssu (Paul Chun Pui).  Adding to the mix is a released convict, Chiu Ming (Lin Tung), who has paid a special fine to enter the monastery to seek a peaceful life, falsely accused of a crime by the corrupt General, yet vowing no retaliatory animosity.  When the Abbot assigns him to guard the library housing the ancient scrolls, he intercepts the apparent masterminds who are there to make off with the ancient manuscript, then accused by the thieves themselves of being a thief.

The Abbot holds a public outdoor hearing with all the monks assembled, as well as the distinguished outsiders, to consider the fate of Chiu Ming.  Lieutenant Chang Cheng makes the case that he caught the man red-handed being somewhere he had no authorization to be (unaware of the Abbot’s instructions), apprehending the man at the scene of the crime, leaving out why he happened to be there, while General Wang argued that he previously arrested and convicted this scoundrel, claiming he could only be up to no good, with Master Wu Wai interrogating each of them with direct questions that call into question their own motives.  Yet when discipled monks are asked for their input, they indicate the General would not be satisfied unless significant punishment was rendered.  Accordingly, the Abbot has him locked and chained to the library door, which, of course, means none of the thieves have access to the manuscript.  The General relents, claiming the punishment is too harsh, pleading for the convict’s release, which then opens the door for more maneuvering behind the scenes, with each player caught in a web of betrayal.  The spatial Buddhist architecture, in its primal stillness, stands in stark contrast to the restless and elusive flurry of physical activity among the competing crooks, with most of the film set outside amid majestic forests and open-air temples, with Hu’s interest in Buddhism on display with its crucial relationship to the laws of the natural world.  After spending the next morning walking with various high ranking monks, the Abbot is ready to render his decision, surprising all with his pick of an outsider, none other than Chiu Ming, whose calm humility in the face of the storm is a quality the others lack, which disappoints everyone, all concealing their motives and identities yet vying to overturn this decision.  The benevolence of the newly chosen Abbot is immediately on display, thwarting all power plays, while demonstrating compassion, yet the undaunted Esquire Wen has the stolen scroll in his possession, urging White Fox to make her escape, eyed by Lieutenant Chang Cheng, who follows her as she escapes into the woods, with first one and then the other continually stealing it from the other in a comic Keystone cops routine of misdirection.  With characters running in opposite directions with their prize until smacking into an immovable obstacle, shocking cuts occur when characters unexpectedly appear behind trees in the forest chase, leading to a long escapade that finally features some daring martial arts battles and some nifty stuntwork.  It’s ultimately Esquire Wen and White Fox that win the prize, followed by a contingency of monks on their tail, with Wen having no other option but to hire a ferry boat across the river, very pleased with himself, until the boatman’s identity is revealed and Wen is exposed as a scam artist, bringing to light his own ruthless ambition and indiscriminate corruption.  Traversing through the mountainous rocks and boulders, the monks block all exit avenues, yet it’s Master Wu Wai’s stable of women that surprise them in the forest, turning into flying shamans with their robes fluttering in the breeze, finally cornering them and dealing a final blow of karmic retribution.  The new Abbot sends them all aghast when he burns the sacred document, dismissed as a “tattered old scroll,” claiming it was the cause of too much unwanted attention, handing out new copies that he carefully transcribed himself, claiming the scroll’s power lies in its written message, not in the object itself.  Ostensibly a morality tale, where the rain in the title refers to outside worldly influence wreaking havoc in hallowed quarters, it does feature a long and extensive battle of wits, where the frenetic underhanded subterfuge is matched by a calmer, more virtuous display of selflessness, the moral of the story apparently is crime doesn’t pay, with underlying implications that moral justice matters.