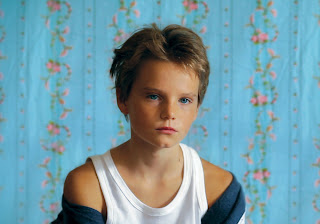 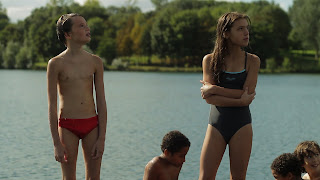 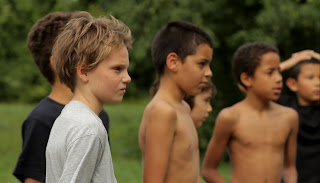 The French seem to have a fondness for this kind of thing, where esteemed filmmaker Louis Malle made a film where “incest” felt natural in MURMUR OF THE HEART (1971), seen as just an extension of parental affection, but here the idea is to make an audience accept a young 10-year old girl passing as a boy.  While the idea is not at all new, what’s different about this film is that it doesn’t even attempt to delve internally into what motivates the child, but instead portrays a young girl Laure (Zoé Héran) as someone who is more inclined to dress and act as a boy, fitting in easier as one of the boys on the playground where she identifies herself as Mikaël, like her alter ego, which presents few problems other than how to go to the bathroom.  Other than that, she’s simply more comfortable in shorts and loose t-shirts, where she’s easily accepted as one of the gang in her new neighborhood, as she’s obviously moved around quite a lot in her childhood.  She has a younger sister at home, the 6-year old Jeanne (Malonn Lévana), who wears girly dresses and curls and loves being a ballerina, where the two are actually very close, as they are with their adoring parents who couldn’t be more loving or supportive.  This is the French element, where the family unit is near perfect, where the absence of any real problems allows the audience to focus upon this idealized world, where it all feels so charming and politically correct, as the gang is a racially diverse group, where the mood is always bubbly and upbeat, where the music tells you all you need to know, loud, positive, and problem free.

Laure is on the screen in nearly every shot, looking quite handsome as a boy, where he spends much time preening in mirrors to get the swagger and gestures just right, including how to spit like a boy, where he quickly attracts the attention of another girl, Lisa (Jeanne Disson), probably the tallest of the group, who develops an instant attraction.  Much of the action unfolds in a documentary style, accentuating the feeling of naturalism, especially groups of kids playing together, but the accompanying tone is anything but natural, as the kids are always happy, laughing and giggling, even at home where she always presents herself as Laure, still dressed the same way, the games she plays with her family or her sister are never angry or confrontational.  This is the part of the story that feels forced and contrived, as this idyllic, problem-free world rarely exists at any age, so the viewer feels certain that the bubble of worldly perfection would have to be popped at some point, where the director instead extends this period of living a lie, even showing Mikaël going shirtless on the soccer field, like the other boys, and experiencing his first kiss as a boy.   But it soon becomes clear that once summer is over and kids return back to school, the dream (and playtime) is over.  Since so much of the film is presented simply as children playing, the mood certainly shifts when the games stop.

The manner in which the director chooses to expose the truth feels quite cruel, where her mother forces Laure to humiliatingly admit she’s a girl to all her friends, including Lisa, once again only superficially examining the surface, as any number of negative psychological reactions are likely, one of which is refusal or bolting out the door, especially if the child truly identifies with being gay and is not interested in kissing boys.  But none of them happen here, instead parental compliance is inevitable, moral law is upheld, and society is apparently saved as the mother instead defines playing the game of being “the boy” as a choice, as if Laure could turn this on or off at will, which is a decidedly anti-gay point of view.  The director intentionally leaves this point hanging on an ambiguous thread, as it is simply not addressed, leaving the future, and any potential connection of tomboys to lesbians, uncertain.  There’s another aspect of this film that feels layered in controversy, which is the prevalent use of humor throughout, where to a large extent people are laughing “at” Mikaël’s dilemma and how she often comically chooses to deal with it, which gives the audience a chance to freely laugh at her instead of evoke sympathy or understanding.  The film is all about curiosity and exploring the idea of wanting to be someone else, where the question of societal prejudice is never raised, which ultimately becomes the issue when one starts changing their gender.  Perhaps the definitive film addressing this issue from a child’s point of view is Alain Berliner’s MA VIE EN ROSE (1997), a candy-colored fantasia about a 7-year old boy who is convinced he is a girl, one of the most delightfully convincing efforts that suggests if he’s happier as a crossdresser, who’s to say he’s wrong, showing a great deal of compassion and personal insight into the complex issue of gender confusion, something this film happily skims over.
Posted by Robert Kennedy at 12:03 AM