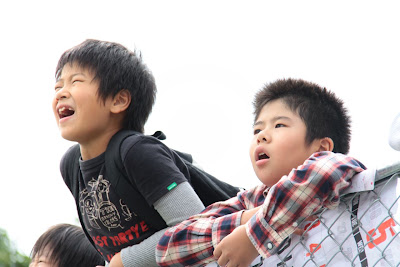 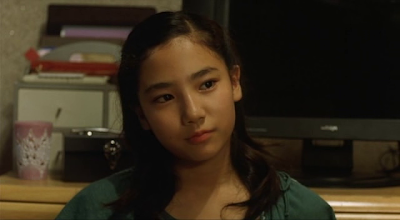 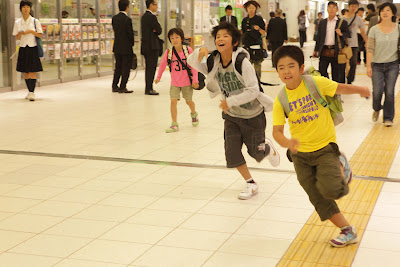 Not everything has to be significant.  Imagine if everything had meaning.  You would choke!
—Kenji (Jô Odagiri)

In a nod to Japanese masters like Ozu, with his fondness for trains and everyday, ordinary reality, also Naruse, with his fondness for family dramas facing the wrenching impact of the modern world, Hirokazu Kore-eda has written the simplest of children’s stories, also seemingly influenced by the spontaneity of the French New Wave, as these children can be seen running through the streets wherever they go, always running towards an elusive and indefinable goal of happiness.  Commissioned by the Japanese Railways as publicity for the Shinkansen Bullet Train connecting the northern and southern regions on the island of Kyushu, much of the story, accordingly, centers around trains, where families grow excited hearing about the idea of a bullet train linking the southern Japanese city of Kagoshima with northern Fukuoka, the homes of two real life brothers, Koichi (Kôki Maeda) and Ryu (Oshirô Maeda), each living with a different separated parent.  Kagoshima is directly across the bay from Sakurajima (seen here in 2009:  Full resolution), an active volcano spewing ash upon the city every day, where Koichi is regularly seen sweeping and wiping the ash away, and the town’s children, amusingly, have the ash beaten off of them, as one might a rug, each raising a cloud of dust before they enter the school.  Koichi may be in 5th grade and is the older, more brooding brother living with his mother and grandparents while the two years younger Ryu lives a more carefree life with his aimless and less ambitious father (Jô Odagiri), a would-be rock musician who can’t seem to hold a steady job and prefers instead to gamble.  Both have found a network of friends and seem to be happy, but Koichi secretly wishes his family would get back together again.  The film is told largely from Koichi’s point of view, but also adds the perspective of each of the other children.  Adults in this story are seen as distant, rarely part of the children’s world, where the grandparents tend to be eccentric, ever involved in drinking, playing cards, hula dancing, or finding the long sought after ingredients to a favorite recipe for a karukan cake.

There’s an interesting Japanese custom of announcing yourself each time you enter your home, also seen in Kiyoshi Kurosawa’s TOKYO SONATA (2008), where this familiar greeting has a way of paying respects and maintaining solidarity not only with your family, but also the dwelling itself.  Japanese families continue to fully accept modernization, complete with all the latest technology and advancements, but also maintain rituals that connect them to their pasts.  The modern landscape of busy city streets are always punctuated with those Ozo compositions of telephone wires strewn high above, as if linking civilization together, right alongside the passing trains.  The ominous cloud above the volcano looms everpresent, a suggestion of lurking danger, where Koichi is continually amazed how people just seem to ignore it.  Mostly the kids meet in secret, away from their parents, and discuss the world around them, including their favorite things and secret desires, where one of Koichi’s friends has a crush on the school librarian, who is ever cheerful and wears short skirts, others dream of being as good as Japanese baseball player Ichiro Suzuki.  In class, when asked what profession they might wish to pursue, several of the kids are clueless, as one wants to be in “exile,” while one of Koichi’s friends wants to be a rhinoceros beetle.  This kind of breezy, lighthearted comedy with enthusiastically happy kids describes the mood of the film, which feels like a series of often improvised vignettes strewn together.  When Koichi hears a rumor that the combustible energy of two bullet trains passing in opposite directions is so powerful that if you make a wish at the exact moment they pass, it comes true, this becomes the driving force of the film.

The ever smiling Ryu, aware of the constant fighting when his parents were together, makes friends of his own, including a taller girl Megumi (Kyara Uchida), who aspires to be an actress in Tokyo, and is seen doing television commercials with another more ambitious girl in her class that seems to always get the lead.  Her still attractive mother, Kyoko (Yui Natsukawa), is a former actress, but left the profession to raise a child, still embittered by the fierce competition of the business, bluntly questioning if her daughter has what it takes, and now runs a local bar.  Like Ryu, she seems to want to get away to Tokyo largely to avoid the drunken customers of her mother's bar.  Koichi frequently chats on the cellphone with his brother and hatches a plan where they meet at the closest spot where the bullet trains cross paths, hoping they can make their wishes come true.  Believe it or not, a lot of planning is involved, from raising money for trainfare and for food, finding a way to get out of school, also away from their parents for an overnight experience, where they’d need a place to stay, as they couldn’t return until the next day.  For kids this young, this is a major undertaking, filled with any number of possibilities that could go wrong, but they’re always seen eagerly moving ahead full throttle, excited at what the future will bring, where it becomes a train road movie, a journey into the unknown, a child fantasia entering the Zone of Tarkovsky’s Stalker (1979), a place where one’s innermost desire can become true.  Unlike many of Kore-eda’s other movies, the haunting funereal poetry of MABOROSI (1995), the somber and delicate fantasy of AFTER LIFE (1998), the searing social realism of NOBODY KNOWS (2004), or the meticulous, unsentimentalized detail of STILL WALKING (2008), this is clearly on another plane, feeling very much like a real life animated movie that allows kids to be kids without the complex difficulties of having to encounter a hostile environment.  Family separation is not debilitating for these brothers, as both have a solid network of friends and feel loved by their extended family.  This coming of age story may feel too slight and without sufficient conflict for adults, really not all that inventive and not helped by the generic music from Quruli, where kids might enjoy this much more than adults, as they are the focus onscreen for nearly the entire adventure, though just spending time with these kids may be the point.  While not nearly as clever or imaginative as the gentle stylistic flourish of Naomi Kawase's SUZAKU (1997) or Katsuhito Ishii’s The Taste of Tea (Cha no aji) (2004), the future, as seen from their eyes, looks bright, where kids are resilient and strong with evolving values that reflect a flexible ability to adapt and change, retaining ever positive outlooks as they look ahead.
Posted by Robert Kennedy at 10:25 AM