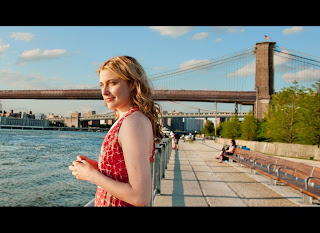 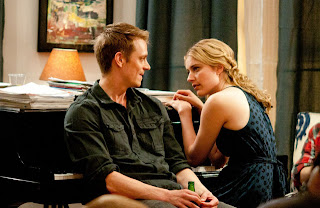 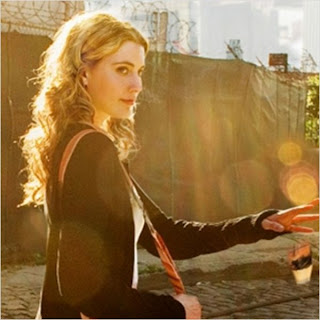 LOLA VERSUS          C
USA  (87 mi)  2012  d:  Daryl Wein
Everything about this film screams conventionality, as if it’s crying out to be loved and appreciated for tapping into the mainstream market, especially the targeted 16 to 40 age group.  But unfortunately what it really ends up being is an updated 90210 high school movie for the twenty-something set, where a revolving set of characters are still going through the same relationship and adolescence problems ten years later.  What this does is extend teenage adolescence well into adulthood, at least in the movies, which is the new normal in the highly prized targeted audience that reflects a consumerist society. This is a continuation of Wein’s earlier effort Breaking Upwards (2009), both co-written by the director and actress Zoe Lister Jones (yes, the couple that couldn’t break up in that film are back together again), adding Greta Gerwig into the lead role, a somewhat charming and also punishing performance, as she’s constantly beating up on herself, continually making the wrong choices, where she’s something of a scatterbrained drama queen that revels in the center of attention as she constantly delights in her own failings, surrounding herself with so-called friends to commiserate in her misery, which is just another way of not being lonely, continually having someone to listen to you moan and bitch about your problems.  Real people are not as consumed with their own lives as this portrait, perhaps occasionally, but she never for a second spends time where she’s not obsessing about herself.  This can grow very tiresome after awhile, and is especially wearying considering this is the narrative goal.  One must question the rationale of Gerwig’s agent in accepting this material, as it seems like a crass attempt to break into the mainstream, to make a clean break from the critical acclaim of mumblecore and indie films to the bigger pay checks of Hollywood, where she can be sent the same scripts as milk toast overpaid starlet Jennifer Aniston.  Always appearing neurotic, also physically a bit awkward and klutzy, never at ease with herself, perhaps a less intellectual Diane Keaton, Gerwig would seem to be the perfect pairing in a Woody Allen movie, and she is slated to appear in his next release, TO ROME WITH LOVE (2012).
In much the same way Gerwig’s character as Lola comes from unconventional parents, Bill Pullman and Debra Winger, both seen as weirdly off-kilter survivors of the psychedelic age, where Lola has strived all her life just to be normal, this film couldn’t be trying harder to find the middle ground between the comic wit of New York City Woody Allen and the likeability of TV sitcom Friends, where it ends up closer to the latter.  The film even wraps itself in popular culture references, where a male character relates to Ani DiFranco Ani DiFranco - Both Hands YouTube (3:16), the so-called “queen of hatred” during lovemaking, while Alice (co-writer Jones), the best friend of Lola claims “I learned everything I know about being a woman from 90210,” and Lola herself breaks up with a creepy guy using dialog from THE GODFATHER (1972), “But, that aside, let’s say that I swear, on the souls of my grandchildren, that I will not be the one to break the peace we have made here today.”  Marketed as the next hip comedy from “The Studio that brought you (500) DAYS OF SUMMER (2009),” it feels more like JUNO (2007), filled with wise-cracking remarks about the lack of trust and failed relationships, filled with an upbeat teen musical score that is mostly all-girl, which will really date this film in the long run, but for the present, it couldn’t be a more typically conventional, copycat Hollywood template for making a hit, but which is so obvious in its intentions that it loses any sense of naturalism readily displayed from Gerwig.  Her character takes a swan dive into deep melancholia after her fiancé Luke (Joel Kinnaman) calls off their wedding on her 29th birthday, where much of the actual wedding day events have already been booked and paid for.  Swooning into the arms of friends, she is comforted by her acid tongued best friend Alice, where the two continue to act and behave like teenagers with readily available credit cards throughout (though we rarely see anyone work), while a mutual friend of her ex, Henry (Hamish Linklater), suddenly takes an interest in Lola, all but upsetting the status quo.

While this musical chairs of changing partners takes place, former partners continue to express jealous insecurities, self-loathing, and suppressed anger, where neurotic behavior becomes fertile ground for comedy, supposedly, if it all wasn't taken so seriously, as Lola falls deeper into misery and self-contempt, acting inappropriately with alcohol abuse and having sex with the wrong partners, guys she could really care less about, but she’s hoping it will somehow make her feel better.  Hint—with your self-esteem at an all-time low, sleeping with the wrong guys only makes you feel more miserable.  Add a little pot smoking and who knows what other pharmaceutical cocktails, this is meant to appeal to the ever indulgent middle class, where pampering themselves is what they typically do.  Between bored yoga sessions and inappropriate party behavior, humor is found in Lola’s appearance at an all-male Russian bath, mostly older guys in towels sitting around sweating profusely while Lola is being slapped senseless with leaves from small tree branches by some oversized Russian health czar, while Alice is seen acting in a horribly wretched play that’s amusingly (we find out later) about genital mutilation, called Pogrom, a Yiddish expression for historic anti-Semitic Jewish attacks in 19th century Russia.  Mild laughs all around, with a likeability factor for Gerwig, beautifully shot by Jakob Ihre, the camera behind Joachim Trier’s REPRISE (2006) and Oslo, August 31 (2011), but the trite script is unsuitably bland and doesn’t even attempt to be anything more, where Gerwig is much more appealing as the dizzy space cadet from the 50’s in Whit Stillman’s Damsels in Distress (2011) than she is here sleeping her way through all her friends, none of whom are “Mr. Right,” ultimately discovering self-empowerment in accepting yourself, where supposedly a light bulb clicks after years in the darkness, perhaps the weakest feminist message ever, remaining predictably underwhelming throughout, despite the best efforts of a talented cast.  What this feels like is a musician that’s overproduced, where the appeal and fresh naturalism of the artist is overwhelmed by an intruding production design, all but drowning out whatever talent was on display to begin with.  It feels like a Hollywood studio that doesn’t trust the material and/or the director, despite the impressive cast, so it revamps everything in a previously successful format.  Copycat cinema is an old trick, but it certainly minimizes the film’s impact, undermining and suffocating every attempt at innovation or freshness provided by a skilled set of cast and crew, where it’s hard to believe a film’s highest aspirations are only to be average, an easily achievable mark of success in the self-adulation world Hollywood.
Posted by Robert Kennedy at 7:35 AM