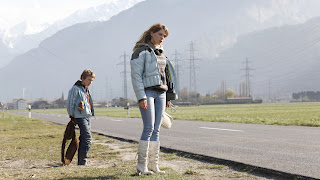 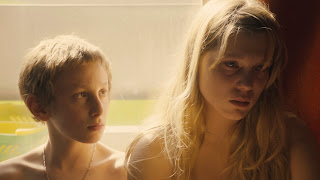 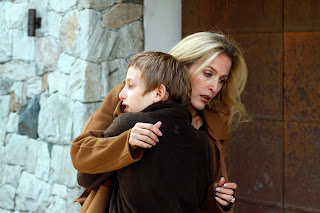 This is another small and hauntingly beautiful film, set in Le Valais, a French-speaking part of Switzerland in the Swiss Alps where the gorgeous mountain scenery, luminously captured on 35 mm, is a perfect backdrop for this story which is largely an examination of class differences, where the wealthy live in a blissful affluence above the clouds, while the workers that serve them live in a more starkly real world of poverty below.  Kacey Mottet Klein is 12-year old Simon, an enterprising young kid who scrounges what he can from the abundance of unattended ski equipment and backpacks of visiting tourists, returning home down the mountain afterwards with a bag of goodies that he sells to the kids in town, a variation on Robin Hood spreading around the wealth, making Simon extremely popular with the locals, as he’s cornered the black market on high-end merchandise, where there’s some interesting similarities to the Polish film Yuma (2012), where the initial taste of Eastern bloc capitalism is seen as an open market free-for-all.  He lives in a high rise building with his older sister Louise, Léa Seydoux from Belle Épine (2012) and Christophe Honoré’s LA BELLE PERSONNE (2008) playing a very different kind of role, a girl with a harder edge, a reckless and largely indifferent influence in his life, as she’s usually off on her own spending time with flashy guys, returning broke, miserable, and alone, where Simon is actually  supporting her, which doesn’t seem to bother her at all, as she’s used to others taking care of her.  The squealing electric guitar score from P.J. Harvey producer John Parish offers a quirky sound design, while the superb cinematography is from Agnès Godard, who usually works with Claire Denis, but interestingly also worked with Erick Zonca in THE DREAMLIFE OF ANGELS (1998).  Actually it was hard not to think of Zonca and his exquisitely gritty depiction of social realism using a near documentary style, as he also made the short film LE PETIT VOLEUR (1999), which translates into The Little Thief, which may as well be the theme of this film, as that’s what people end up calling Simon.  Zonca’s slice-of-life technique is utilized here, as the seeing eye, hand-held camera literally follows Simon wherever he goes.


Written by the director and her co-writers Antoine Jaccoud and Gilles Taurand, reminiscent of the works by the Dardennes brothers, like ROSETTA (1999) and their more recent THE KID WITH A BIKE (2011), where initially there’s a certain amount of affection shown between the siblings, where they fight playfully over who gets the best stolen sandwiches, as all they have to eat is whatever Simon steals, but her long absences take a toll on both of them, but particularly Simon, as he has no real friends or adult influences in his life, so despite his thievery expertise, knowing the value of the merchandise, learning a ski culture that is otherwise foreign to him, he’s not a very good judge of when he’s gone too far.  When he inadvertently gets caught, the guy that catches him, Mike, Martin Compston from Andrea Arnold’s RED ROAD (2006), decides to partner up with him rather than turn him into authorities, as the kid has talent as a ski thief, not to mention elusive qualities that prevent him from being noticed.  But he continually overextends his welcome at Mike’s job, where he keeps popping up when he shouldn’t, ignoring Mike’s pleas to keep away.  In much the same way, he latches onto a British mother (Gillian Anderson) who is on holiday with her kids, where his curiosity becomes more of an obsession, where he literally forces himself to be a part of her world, where she’s obviously the mother he’s never had.  So Simon straddles the line of social acceptability, having long ago crossed the line of moral accountability, but his desire to be near others continually pushes him farther and farther into the danger zone, perhaps taking on the reckless behavior of his sister.  Occasionally the kid goes too far, literally beaten to a pulp after stealing the wrong guy’s sunglasses, a scene that takes place in full view of a café terrace filled with tourists sipping on beer and latte’s, where the guy justifies his extreme hostility by calling the kid a thief.  Impassively, the snow-drenched mountain peaks stand guard, immovable, implacable, yet overseeing all, while the views from the ski lift tram cars are continually mesmerizing.

Simon makes his way up and down the hill daily, where his apartment begins to resemble a stolen goods warehouse, also burying equipment under the snow at the top of the hill, where he’s got operations going at both ends for the Christmas holidays.  Louise has a greater presence in the latter segments, becoming a more uncomfortable fit in Simon’s life, bringing a guy home with her, where it’s clear she thinks Simon is in the way, often subjecting him to a fury of scorn and resentment, as if he’s screwed up her life.  Most of the film is seen through the isolated prism of Simon’s daily routines, where he’s left alone to fend for himself, doing the best that he can, where we wonder what else is he supposed to do?  His sister’s selfish rants have a way of seeping through the protective armor he’s forced to wear, literally demeaning him in a personally hurtful way that’s obviously worse than the humiliation of getting caught stealing or being beaten up.  Curiously, their playful fighting takes on a harsher tone, where both are struggling to inflict painful and damaging blows, both obviously hurt by the other, where Simon is hurt by the continuing attention paid to Louise by guys who could care less about her, and Louise sometimes wishes that Simon had never been born, as he’s always been an unwelcome burden in her life.  Having grown up seeing kids like Simon at ski resorts, the director creates a bleak but tender coming-of-age story that literally teases the audience with possible outcomes, often lingering in pause mode allowing the full effects to sink in, where Simon could be destitute, an outcast lost on his own, or he could get arrested and thrown into some bureaucratic jungle of youth homes, or this could turn instantly tragic, with these ski lifts constantly hovering above these shimmering, snow-packed mountains.  There’s an interesting shot where Simon is lost, literally paralyzed in thought, sitting alone on the edge of the wooden terrace overlooking the spectacular panoramic landscape, where humans themselves barely register in the majestic enormity of it all, where a lone bird lands on the terrace and amusingly hops across, where every step taken feels as random and as inexplicable as whatever’s running through Simon’s mind.  Meier has crafted an unflinchingly honest and touching film that slowly intensifies the quiet devastation building within, featuring sympathetic performances that are achingly real, all told without an ounce of pretense, winner of a special Silver Bear award at the Berlin Film Festival.
Posted by Robert Kennedy at 11:31 AM