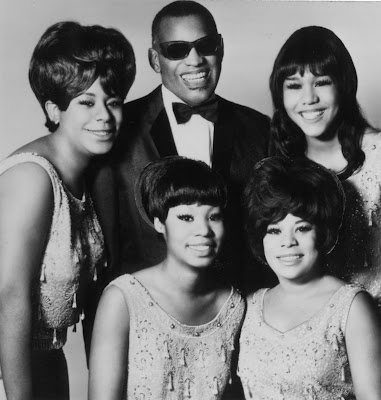 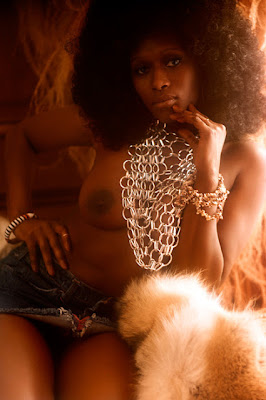 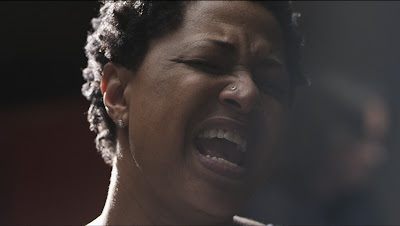 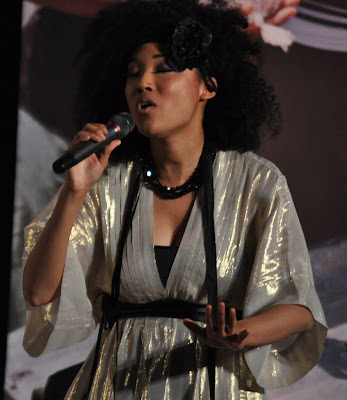 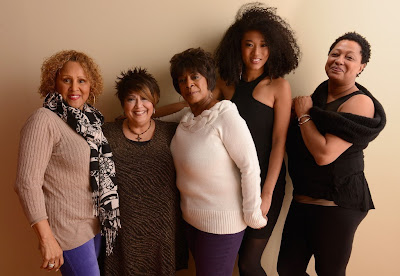 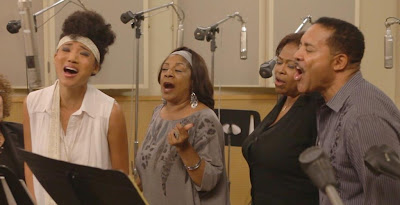 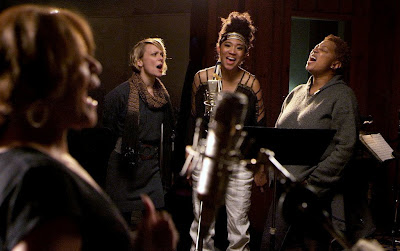 
Arguably the best documentary, and a candidate for one of the best films of the year, a history lesson on the roots of racism in the music industry, but a film that takes an altogether different tone, where the expression of bitterness would be self-defeating, so this is a film that exudes beauty and transcendence through music.  Following the success of Australia’s The Sapphires (2012), a feelgood documentary that recreates the lives of four Aboriginal singers that toured Vietnam singing in front of American GI’s in the late 60’s as a soul group, this is another remarkably upbeat story about some of the more infamous backup singers in history that never became household names.  The common thread in nearly each of their lives was coming from a religious background, as so many are preacher’s daughters, where gospel music is something they learned from early childhood.  Perhaps the most eloquent spokesperson is Dr. Mabel John, whose brother is blues legend Little Willie John who originally recorded “Fever” Little Willie John - Fever - YouTube (2:40), and at age 82 likely the oldest, as she performed with Billie Holiday just weeks before Holiday’s death, and is the first female signed to Barry Gordy’s Motown label, having earlier worked in the insurance business in Detroit with his mother.  Later she worked with Ray Charles as the musical director of the Raelettes, co-writing as many as 50 songs with Charles before eventually leaving secular music altogether to become the pastor and founder of the Joy in Jesus Ministries in Los Angeles in 1986, earning her doctorate in divinity from the Crenshaw Christian Center in 1993.  Something of the reigning matriarch of the selected singers, her wisdom about finding an undisputed truth in singing is particularly insightful, claiming James Brown learned all his moves from some of the preachers who were touched by the spirit.  Another common element is Ray Charles, who was the first artist to take gospel into the mainstream, opening up a style of music that resembles a preacher calling to the choir, that answers back with background singers Ray Charles - What'd I Say LIVE - YouTube (4:16, live in Sao Paulo, Brazil in 1963), exuding an earthy sensuality that opened up careers for many of the black women featured in this film.


The revelation of the film is realized by the extraordinary range of emotion not only found in the exemplary music performed by these women, but in the stark honesty and unpretentiousness of their lives.  Having never risen to stardom, where the quality that defines a backup singer is harmony and blending into the whole, they perform without egos.  That is not to say they don’t have them, as these women are divas in the music industry, but they have the unique ability to set aside their own individuality, yet they often perform the part of the song best remembered by listeners without getting the credit.  The perfect example is Lou Reed’s 1972 hit “Walk on the Wild Side” Lou Reed - Walk On The Wild Side - Rare Video-HD - YouTube (4:13), as the responding chorus where “the colored girls sing—doo, da-doo, da-doo, doo doo doo doo” is easily the part of the song that sticks with us, offering a momentary joyful explosion in the middle of an otherwise desperately sad and often monotonous, drug-filled journey for individual recognition.  Add to this the absolutely delightful combination of David Byrne’s art school artistry finding a soulful groove with Lynn Mabry doing background vocals in Talking Heads “Slippery People” Talking Heads Slippery People - YouTube (4:06).  The film cleverly shows album covers of the era with the faces of the lead singers whited out, suggesting it’s not about them, but that part of the song sung by others.  A chilling example comes from Darlene Love, who in 1962 sang the lead in Phil Spector’s hit single “He’s a Rebel,” but when she heard the song on the radio afterwards, it was still her voice, but the group credited for the song was The Crystals The Crystals (Blossoms) - He's A Rebel (original recording) - YouTube (2:25).  This kind of musical theft was common in the industry, especially by white producers of black artists, where singers remained under contract, much like movie stars during the heyday of the studio system, which literally *owned* their rights, to do with as they pleased.  Eventually, through sheer perseverance, Love’s voice became among the most sought after backup singers in history, as the musicians themselves recognized raw talent and wanted to work with her.  The most heartbreaking aspect of the story is once Love finally freed herself from the contractual obligations of Phil Spector, she signed with Gamble and Huff, who immediately sold her contract back to Spector, which has implications of a slavery plantation system.


Another common element between these singers is the personal belief that if one remains true to one’s calling, stardom will follow, as nearly every one thought they’d have a solo career.  One of the backups who came closest was Merry Clayton, who now in her mid 60’s remains a force of nature, who began as one of the Raelettes.  Growing up in New Orleans listening to Mahalia Jackson, in 1964 she recorded the first version of “The Shoop Shoop Song (It's in His Kiss),” although it was Betty Everett's version of that same year that reached the Top 10 of the music charts.  She is perhaps most famous for her contribution to the Rolling Stones “Gimme Shelter”Gimme Shelter 1969 - The Rolling Stone - YouTube (4:34), a reflection of the most turbulent era of the American 60’s.  With surprising detail, she recalls being called out of bed at 2 in the morning, arriving at the studio in silk pajamas with curlers still in her hair, about as unassuming an entrance as possible  After laying down a single track, they asked for another, where she literally blew the roof off the building, Merry Clayton's isolated vocals in the Rolling Stone's "Gimme ... (31 seconds), adding the steamy erotic sensuality the Stones were looking for.  She was pregnant at the time and unfortunately suffered a miscarriage afterwards—the price for 30 seconds of glory.  During the 70’s, she was the only black female to record with producer Lou Adler at A&M Records until Janet Jackson arrived in the 80’s, but her solo career never took off, claiming the radio would play “only one Aretha.”  Equally heartbreaking is the story of Claudia Lennear, who had a taste of stardom before it eluded her grasp, initially singing with Ike and Tina as one of the Ikettes, with their sexually provocative stage moves, “We were R&B’s first action figures,” becoming the inspiration for the Rolling Stones song “Brown Sugar” Brown Sugar The Rolling Stones - YouTube (3:56), touring with Joe Cocker’s Mad Dogs and Englishmen and George Harrison’s Concert for Bangladesh, which she called a cosmic experience.  Her voice can be heard on the soundtrack to Alan Pakula’s KLUTE (1971), Michael Small - Bree's Abandon (Take It Higher) (1971) - YouTube (3:04), playing during a scene at a discotheque, and even did an August 1974 Playboy spread, but she dropped out of the business, developed a love of languages, and today she teaches Spanish classes.


Perhaps the most talented of the backups, at least in terms of overall range, is Lisa Fischer, the only one who is an outright star, though she prefers to remain behind the scenes.  She backed up Tina Turner, expanding her talent working with the meticulous vocal perfectionism of Luther Vandross, while also going on every Rolling Stones Tour since 1989, seen live in 1995 in Amsterdam,  Rolling Stones - Gimme Shelter - Live _95-Lisa Fischer - YouTube (6:00), seen again two years later in St. Louis The Rolling Stones - Gimme Shelter (Live) - OFFICIAL ... - YouTube (6:50), but then sheds that stage persona for an exquisite rendition of  her own song, Lisa Fisher - How Can I Ease The Pain. Live - YouTube (5:02), for which she won a Grammy, rivaling Whitney Houston for sheer vocals extraordinaire, while also singing a hushed but perfectly harmonious backup to Sting’s angelic “Gabriel’s Message” Sting, if a Winter's Night...2-Gabriel's message - YouTube (3:27).  The new kid on the block is the young Judith Hill, selected as Michael Jackson’s duet partner for his 2009 planned comeback This Is It Tour before Jackson died mysteriously, short-circuiting her career, but she’s been a favorite backup of Stevie Wonder for years, as he appreciates the majestic purity of her voice, seen here singing one of her own songs, “Desperation” Judith Hill | Desperation LIVE - YouTube (3:11).  While these women are all uniquely talented, the beauty of the film is that it allows the filmmaker to probe the depths of their humanity, where there are literally layers of history contained within, becoming one of the more telling comments on the turbulent 60’s, yet showcasing it through music, perhaps the most perfect expression of the soul.  Despite the hardships they all face, music has a way of transcending all earthly matters, where rather than recount the political turmoils of the era, the director explores that changing reality through the impassioned lives of these women.  Like a pinch hitter in baseball, these women were only called upon to perform perhaps 15 or 30 seconds in someone else’s song, yet time and again we see how they make it uniquely their own, where these are no nonsense, literally kickass women displaying the dramatic maturity of the greatest actresses of our time, yet remain unseen, unheralded, and largely unrecognized, where in the case of Darlene Love, the only one in the Rock and Roll Hall of Fame, the industry literally placed someone else’s name over her voice.  Rather than remain angry and defiant, these women have displayed nothing but professionalism where they continually rise above the fray, where the film offers a triumph of the spirit, becoming one of the most gorgeously uplifting movie experiences of the year.


Judith Hill (selected as Michael Jackson’s duet partner for This Is It Tour before Jackson died, sang the lead on the song “Heal the World” at his memorial sevice, released a tribute song “I Will Always Be Missing You,” back up singer with Stevie Wonder)


Dr. Mabel John (the first female signed by Berry Gordy to Motown's Tamla label, also Ray Charles, co-writing 50 songs while becoming musical director of the Raelettes, becoming pastor and founder of the Joy in Jesus Ministries in Los Angeles in 1986, earning a doctorate in divinity from the Crenshaw Christian Center in 1993)


Gloria Jones (back up singers the Blossoms, also recorded the 1964 song “Tainted Love”)


Darlene Love (lead singer on Phil Spector’s #1 hit single “He’s a Rebel” in 1962, also one of the featured artists on Spector’s 1963 Christmas album, singing “Christmas (Baby Please Come Home)” also U2’s 1987 cover version, performed every year on The David Letterman Show on the last episode before Christmas from 1986 to the present, initially lead singer, later erased and changed to backing vocals on The Crystal’s 1963 hit “Da Doo Ron Ron, ” inducted into the Rock and Roll Hall of Fame March 14, 2011)


Janice Pendarvis (David Bowie, Sting on “The Dream of the Blue Turtles”)


The Waters Family (Julia, Maxine, and Oren, worked with Michael Jackson on Thriller album, music for The Lion King and James Cameron’s 2009 film Avatar)
Posted by Robert Kennedy at 2:10 AM