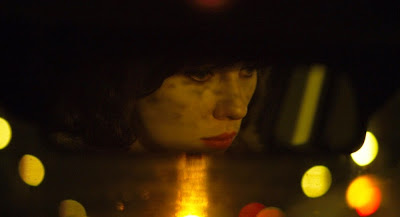 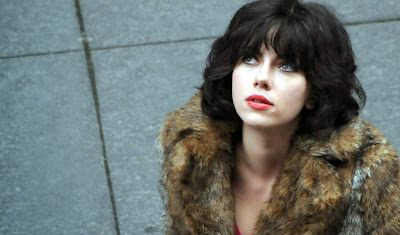 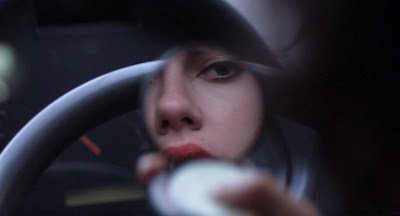 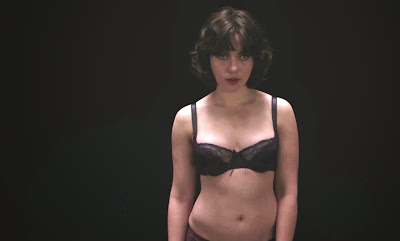 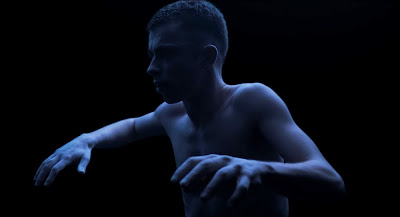 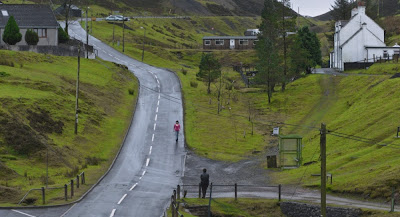 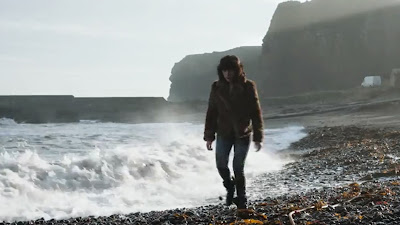 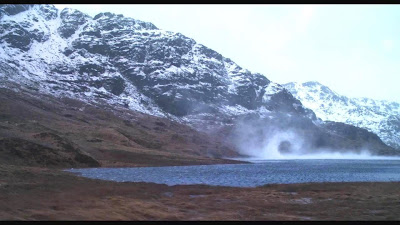 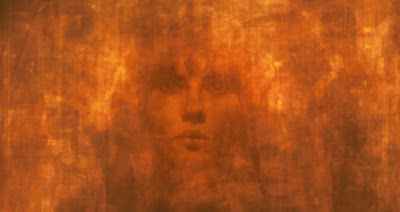 Scarlett Johansson has finally learned to play roles that take advantage of how she’s perceived by a largely testosterone-laden male public, as a sex object where beauty is only skin deep, and they are infatuated by what they see.  In Joseph Gordon-Levitt’s Don Jon (2013), she plays the voluptuous tease, believing she’s the ultimate in beauty and sex, as she’s molded herself to match the perfect fantasy image of what guys want, while in Spike Jonze’s Her (2013), she lacks human and physical form and exists only as a voice of virtual reality perfection.  Jonathan Glazer’s film takes the same title from Carine Adler’s first and only feature film, the one that features a sizzling breakout performance from Samantha Morton, a largely unheralded yet small gem of a film.  Glazer resorts to the sci-fi genre to freely adapt the Dutch-born Michel Faber novel about an extraterrestrial who comes to earth, much like Nicolas Roeg’s The Man Who Fell to Earth (1976), though what plot there is plays out more along the lines of Claire Denis’s Trouble Every Day (2001), but with a different twist, where unlike the book, the film is far more ambiguous and less explanative, leaving the audience in the dark without many clues to figure out just what’s going on.  The opening credit sequence, in something of an homage to Kubrick, reveals intergalactic origins, including the abstract atonal symphonic composition by Mica Levi, aka Micachu, which is equally otherworldly, where in something of a wordless visual splendor, a speck of light in an enveloping darkness approaches the viewer, eventually becoming a blinding shot of light, where the connection to humanity is complete when after a few planetary transfigurations the light becomes a reflection of a human eye. Without a hint of backdrop, the extraterrestrials have arrived in the form of Scarlett Johansson in a black wig, who along with a motorcycle helper, retrieves a dead body, and in a remarkable white screen with no recognizable floor, we see her pull the clothes off the dead woman and place them on her own simulated body, where the transformation is complete, as she passes unrecognizably through the crowded streets of Scotland.

Returning to filmmaking for the first time since BIRTH (2004), Glazer, in a screenplay co-authored with Walter Campbell, turns Faber’s extraterrestrial perspective into a feminist view of female objectification, where women are judged and valued through surface artificiality, and what’s inside hardly matters.  That’s the central premise of the film as an unnamed Scarlett Johansson trolls for unattached men whose absence won’t be missed by anyone, cruising the streets of Glasgow, initially asking innocent questions, asking for directions, eventually luring men into a white van.  Of interest, the director had hidden cameras installed in the van and only informed various male bystanders caught off guard afterwards that they were in a movie.  While she speaks a vague British accent, most of the men have thick Scottish accents that make what they have to say incomprehensible.  Wearing ankle boots, tight jeans, and a fur jacket, with a thick layer of red lipstick, Johansson has a Sirenesque sexual quality from her insinuations, asking if they’re alone, if they have a girlfriend, if they like what they see, etc.  In this way she lures men to a secret apartment that has a hypnotic effect upon them, set to an unsettling score, where they both undress as they enter and she lures them (and their erections) ahead into a black pit of doom, “Dreaming, dreaming,” one man murmurs, to which she answers, “Yes, yes we are.”  While she’s able to walk over it, they obviously have no idea even as they are quickly submerged in a sea of thick, oily black water, left to some strange Hellish fate where they’re done for.  In the book they’re fattened up and eventually harvested for food back on their planet, which is in need of food, but here, without a word of exposition, the intentions are more darkly obscure.


While the film taps into cultural superficialities, what is clear is that Scarlett Johansson is undeniably beautiful, again representing herself as an ideal feminine object, seen in what resembles naked human form early on, where obtaining her sexually, from a male point of view, is ostensibly the epitome of cultural acquisition, where regardless of what might be under her skin, and here she is entirely alien, she is considered the ultimate prize or male achievement within the context of the film and modern day culture.  Despite any intuitive analysis, however, only a bare minimum is revealed, where the film is an eye-opening slap to the face with an impeccable look, nearly wordless and driven by such meticulous composition and visual stylization from cinematographer Daniel Landin.  What’s interesting is that the viewer is lured into this unexpectedly haunting and inexplicable world in much the same way as the men are lured to Scarlett, where for most of the picture we haven’t a clue where this is going, where we are as much in the dark as Scarlett appears to be, a stranger in a strange land, as she has a robotic assignment, but she begins to recognize something more beyond her mission.  The first sign of this is a peculiar change in the routine, where after a prolonged reflection of herself in a mirror, we realize she has released one of her victims, seen running away off in the distance, still naked.  Rather than preying on unsusceptible men, she herself becomes the prey, suddenly the target of her own accompanying motorcycle team who begin searching for her, as if she’s somehow malfunctioned.  After spending some time sheltered by a stranger who asks no questions and treats her with kindness and respect, but introduces her to earthly sex, she is somewhat stupefied and retreats deeper into the woods.  In a film about the artifice of surface realities, the natural beauty of the woods takes on darker hidden impulses, where the world is not as it seems, yet she is immersed, like her previous victims, in this primeval darkness that all but envelops her, exposing her for what she is.  One cannot ascribe human emotions and feelings to this non-human entity, who has her own peculiar eccentricities and curiosities about her, but it’s an interesting transformation from being all powerful to becoming powerless, subject to the baser elements of man.  It’s a mystifyingly beautiful and strangely puzzling little film that does wonders with an absolute minimum, much like the non-narrative, abstract idealizations in Terrence Malick’s To the Wonder (2012), where Glazer offers a similar philosophical quest for meaning.
Posted by Robert Kennedy at 10:48 AM