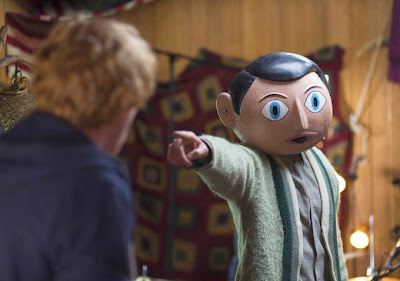 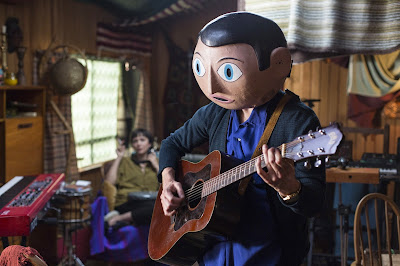 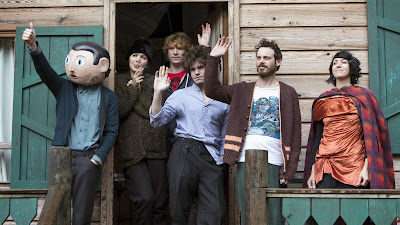 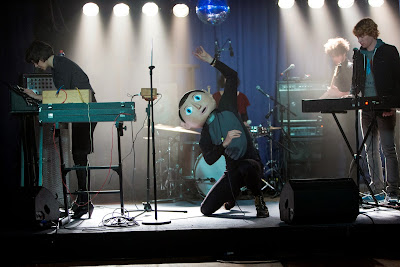 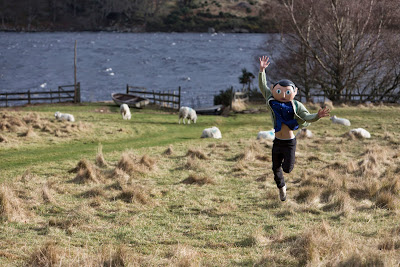 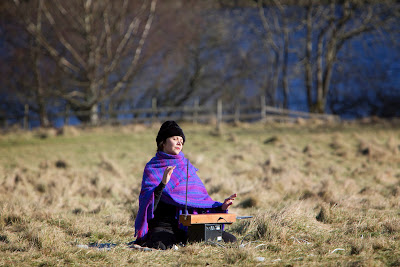 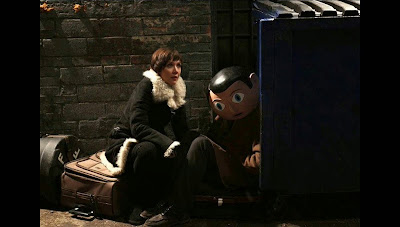 
One of the more unconventional films dealing with outsider art, a social reality outside the comprehension of most viewers, where the character Frank, Michael Fassbender in a giant cartoon, papier-mâché head that he never takes off, is the leader of a small, almost exclusively unseen and unheard of rock band called the Soronprfbs, a name even the group itself can’t pronounce.  While they are the picture of dysfunction, playing a style of music that defies definition or form, perhaps noise to some, they are a band where the anti-social behavior habits are curiously intriguing, featuring Clara, the ever dour and always angry Maggie Gyllenhaal (outstanding, literally carrying the picture with her resolute defiance) in the Yoko Ono role as the outrageously extreme Theremin and synthesizer player, two French-speaking bohemians (François Civil and Carla Azar) on bass and drums that refuse to even speak most of the time, and the artistic master Frank as the lead singer, a man they all seem to worship, where the demented humor is so off-the-wall that it’s easily one of the funniest films of the year.  Jon Burroughs, Domhnall Gleeson, son of actor Brendon Gleason and one-half of the Weasley twins from HARRY POTTER AND THE DEATHLY HALLOWS Pt’s I and II (2010, 11), is a more ordinary kid stuck in a small town in Ireland with ambitions to write songs and play in a rock band.  Purely by chance, Jon happens to be at the beach one day when the keyboard player for the band is seen knee deep in the water supposedly trying to commit suicide, with the police and paramedics on the scene fishing him out of the water.  When the band’s manager and guitar player Don (Scoot McNairy) expresses remorse that they’ve lost a keyboard player, Jon almost instinctively exclaims he’s a keyboard player.  Don walks to a nearby van and confers with the other members of the band before returning, asking, “You play C, F, and G?”  Nodding happily, Don invites him to show up for a performance later that night.  The intersection of Jon’s mediocrity and the group’s outright weirdness becomes the focal point of the film, where Jon becomes our man-on-the-scene narrator offering insight into Frank and Soronprfbs, while also exploring hero worship through a somewhat surreal, musical groupie mindset of Cameron Crowe’s ALMOST FAMOUS (2000).  The film’s premise borrows from a similar cartoon-headed character of Frank Sidebottom, the stage persona of English musician and comedian Chris Sievey who appeared on British television throughout the 80’s and 90’s, passing away in 2010.  The film is dedicated to Sievey, using his image as Frank, so to speak, while taking off from there into unforeseen territory.


A decade ago this director made his debut with ADAM & PAUL (2004), a likeable losers buddy movie following two down-and-out heroin addicts around the streets of Dublin as they drift aimlessly from fix to fix, suffering the humiliation of rejection wherever they go, yet told in a hilarious and heartbreakingly realistic manner, so Abrahamson is familiar with characters on the outer fringe of society.  The writing team of Peter Straughan and Jon Ronson deserve much of the credit for creating such a uniquely original look inside the world of outsider artists, where Ronson based the film on his own experiences playing keyboards for Chris Sievey’s Oh Blimey Big Band, using Gleeson as a stand-in for his own real life character, adding elements of Daniel Johnston, who’s been diagnosed with schizophrenia and bipolar disorder, and also Captain Beefheart, whose own band eventually quit on him due to his abusive conditions, but who also suffered from multiple sclerosis during his career.  From the first show, however, it’s clear the band has hostility issues, (“Stay away from my fucking Theremin!”) so when they explode in a fury of anger onstage, with Clara breaking her instrument and throwing it at her other band mates, all leaving the stage in an explosion of rage and confusion, Jon is left appropriately stunned as they drive off in their van afterwards without a word.  But when Don invites him to join the band, telling him Frank thought he brought something “cherishable” to the group, Jon jumps at the chance, though what he apparently thought would be a weekend performance turns into an eighteen month long retreat into seclusion at a private estate in Scotland where they could work on recording an album.  To perhaps no one’s surprise, he’s immediately met with a wall of resistance, where the band members believe he’s unworthy of sharing the stage with Frank, Clara especially, as she feels an obsessive need to protect Frank, especially from the likes of someone as mainstream and conventionally normal as Jon, as like the rest of society, clearly he doesn’t “get it.”  For lack of anything better to do, Jon starts tweeting about the band, placing video clips on YouTube and sharing them with the world, where his social media entries become the narration of the film, perhaps centering more on Jon than we’d like, as the person we want to know more about is Frank.  While Jon is in a state of curious bewilderment over that fake head, he asks Don, “He never takes it off?  He sleeps in it?  What about eating?  How does he clean his teeth?”  Don’s toned down, deadpan response is simply, “Jon, you’re just gonna have to go with this.”


As it turns out, Frank is the heart and soul of the band, leading them all to their “farthest corners,” where everyone is in awe of him, refusing to record a single note until the entire album is ready, as instead he puts the group through rigorous exercises which always seem to evolve into fights, where “Chinchilla!” is their chosen safety word, though routinely ignored.  Don, we learn, has his own issues, as he has a history of doll fetishism, where the relationship that he prefers most is with mannequins, as otherwise women have to lie completely still.  Having met in a mental institution, Don thinks Frank is the sanest guy he’s ever met, believing they all want to emulate him, but there can only be one Frank.  When an irate German family arrives to their retreat, where Don acknowledges they’ve spent all the rent money and were supposed to be out a month ago, Frank goes out to speak to them in fluent German, not only calming them down, but as they leave voluntarily, one of them is thanking him for “this new truth in my soul.”  Jon’s dabbling on social media, however, eventually accumulates an audience with 23,000 hits on one of the videos he posted, so he secretly signs the group up for the SXSW music festival in Austin, informing Frank that they have an “audience.”  While Frank appears tempted by the idea of getting his music in front of an actual audience, composing what he calls his most “likeable” song, Frank 2014 - Frank's most likable song ever YouTube (30 sec), the rest of the band has no interest in money or fame, finding it a meaningless diversion which has nothing to due with their true calling—making art—seeing it more as a sell out, the worst kind of bourgeois capitulation.  Shooting the scenes in America in New Mexico and the mountainous plains of Kansas as a substitute for Austin, Texas, Jon leads the band to the Mecca and supposed promised land of indie music, where the film is an outrageous comedy of defied expectations, becoming something more than theater of the absurd, where Jon’s push for stardom and public interest has a detrimental effect on the others who want no part of this publicity stunt, as they could care less about pandering to an audience, eventually having some serious things to say about mental illness, where we find ourselves asking, “How crazy is Frank?”  Instead of this thunderous rush of SXSW Mardi Gras excitement, it’s a plunge into a downbeat, Lynchian netherworld reminiscent of BLUE VELVET (1986) with Maggie Gyllenhaal reprising the Isabella Rossellini role onstage, singing a moody, super slow-motion version of “On Top of Old Smoky” in some empty dive bar to drunks and derelicts that couldn’t be farther away from where Jon wanted to take them, while Frank, without the controlling help of Clara, veers totally out of control, and only then does Jon finally realize he doesn’t “get it.”  It’s a look behind and under the mask, told without any fanfare, quietly probing under the surface at the real anguish and pain that drives some of these troubled artists, who are overcome by an assault of mangled nerves and psychoses, where an audience finds entertainment in the performance of their inner turmoil, unleashed as it is in a stream-of-conscience barrage (“Screeching frequencies of pulsing infinity!”) of wounded psychedelic images that resemble the crazed inner ramblings of Alan Ginsberg’s Howl, leaving the audience transfixed in a haunted state of bewilderment.
Posted by Robert Kennedy at 12:00 AM