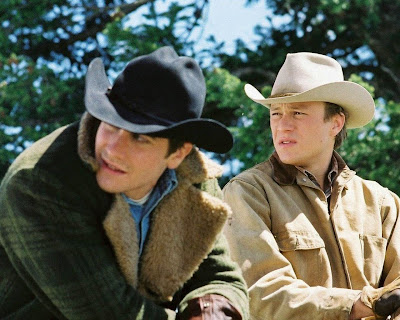 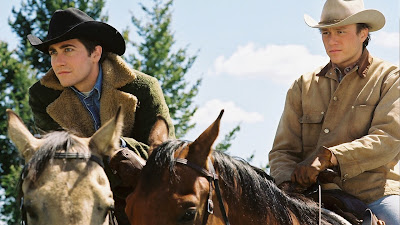 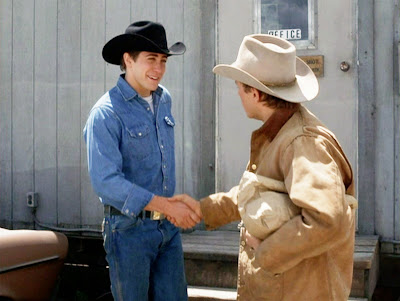 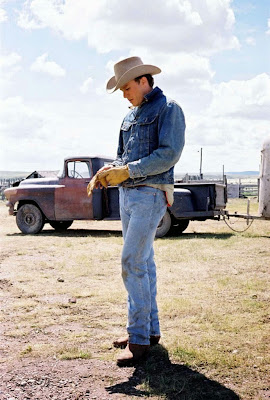 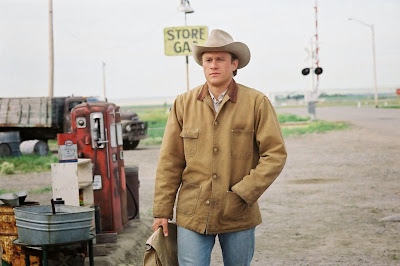 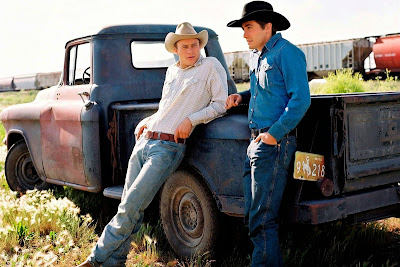 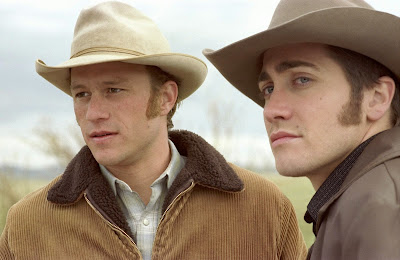 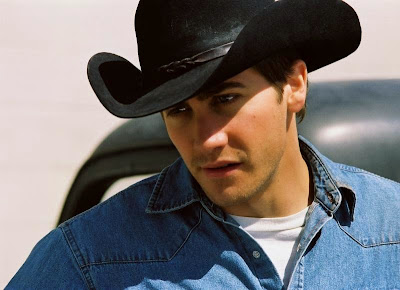 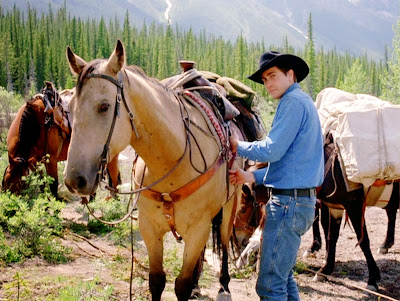 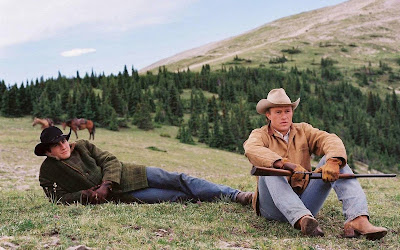 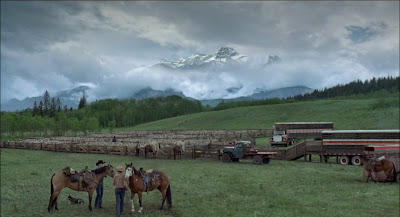 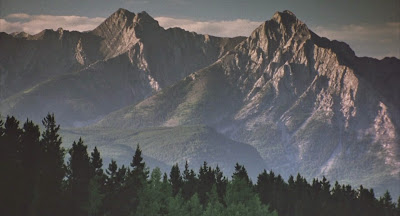 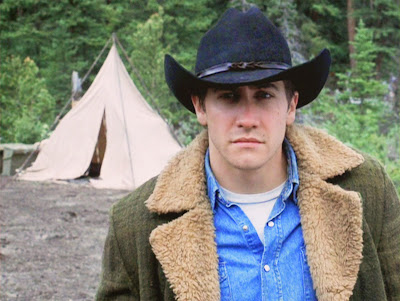 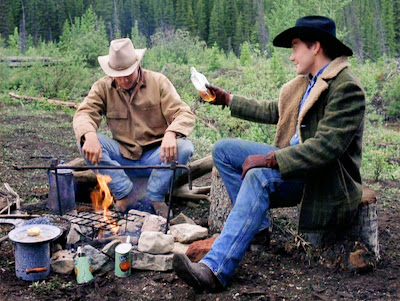 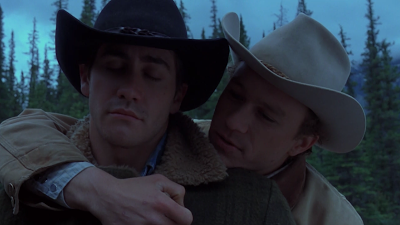 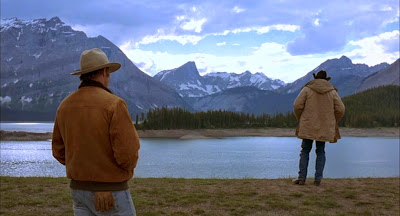 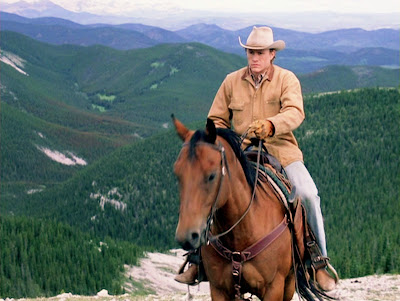 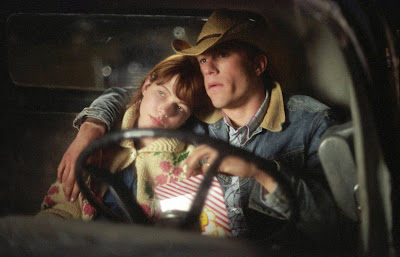 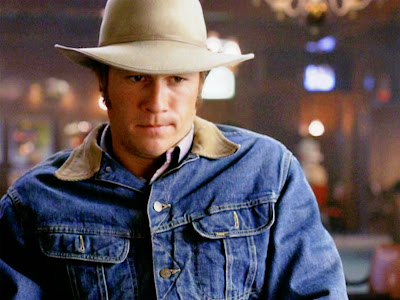 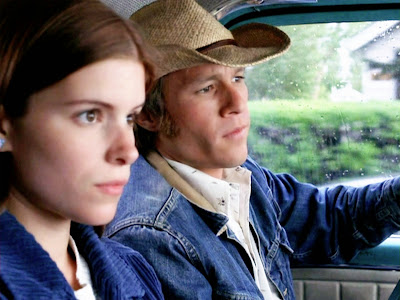 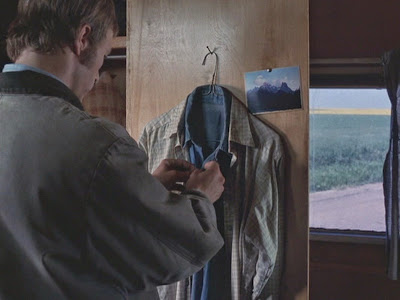 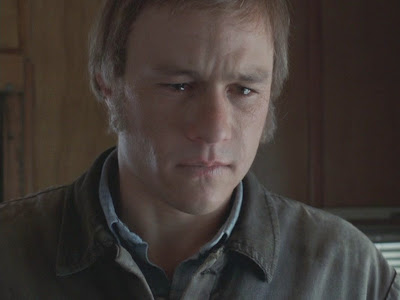 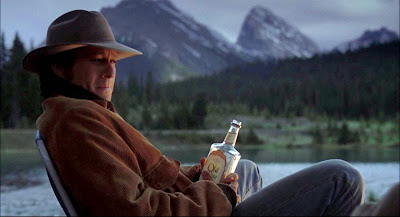 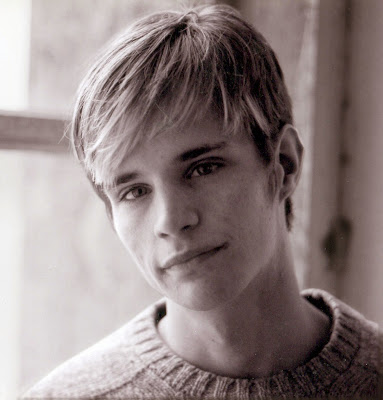 
Every once in a while a film comes along that changes our perceptions so much that cinema history thereafter has to arrange itself around it.  Think of Thelma and Louise or Chungking Express, Blow-Up or Orlando — all big films that taught us to look and think and swagger differently.  Brokeback Mountain is just such a film.  Even for audiences educated by a decade of the New Queer Cinema phenomenon — from Mala Noche and Poison to High Art and Boys Don’t Cry — it’s a shift in scope and tenor so profound as to signal a new era.
—B. Ruby Rich from The Guardian, September 23, 2005, B Ruby Rich on Brokeback Mountain | Film | The Guardian


If you can’t fix it, Jack, you gotta stand it.
—Ennis Del Mar (Heath Ledger)


Larry McMurtry and Diana Ossana adapt a 1997 E. Annie Proulx short story from Close Range, Wyoming Stories, extending the parameters of the original story, which in the book was narrated in third person by the character Ennis Del Mar, while retaining the haunting poetry on the page.  It’s hard not to remember that one year after the story was published on the night of October 6, 1998, Matthew Shepard, a young 21-year old gay man from Laramie, Wyoming, about the same age and near the same place as the two portrayed in the story, was lured away from a campus bar by men who told him they were gay, tied to a fence, pistol whipped and beaten, then left for dead in near freezing conditions where he eventually died.  This horrific murder brought national and international attention to hate crime legislation at the state and federal levels, where in October 2009, the United States Congress passed the Matthew Shepard and James Byrd, Jr. Hate Crimes Prevention Act (commonly called the “Matthew Shepard Act”), and on October 28, 2009 President Barack Obama signed the legislation into law.


In a tale of anguished souls living in the shadows of similar lore, perhaps Ang Lee’s most heartbreakingly tender film, shot largely in the pristine mountainous wilderness of Alberta’s Rocky Mountains, with cinematographer Rodrigo Prieto capturing its raw beauty, this is a touchingly understated film with few words, using silence and natural sounds, with exquisite pacing where the situation onscreen explains itself.  From the opening shots of a desolate town in Signal, Wyoming back in the summer of 1963, we’re immediately immersed in a dusty shithole of a town that looks totally run down, where the space is larger than the people who inhabit it.  Two guys are waiting for a job without speaking.  Local rancher Dennis Quaid tersely issues them their instructions in a cowboy vernacular that is barely understood by the uninformed.  One guy tends to the sheep high up on Brokeback Mountain, sleeping without a fire out under the stars, supposedly protecting them from intruders or outside elements like coyotes, protecting the rancher from losses to his herd, while the other picks up weekly food and supplies, and tends to the camp, where both meet only at breakfast and dinner.  Jake Gyllenhaal is Jack Twist, a down on his luck rodeo rider, while Heath Ledger is Ennis Del Mar, a tightlipped, dirt poor ranch hand, both high school drop outs with few prospects, neither yet twenty.  Interestingly, few words are spoken between them, as the wonder of the outdoors literally fills the screen with extraordinary natural beauty, where the sheep roam in perfect harmony through the lush, pastoral landscape.  Before they know it, with the help of several bottles of whisky, words are flowing, surprising themselves, as they naturally feel an ease with one another, which leads to hard-fought-against romantic inclinations.  They spend a summer together, which haunts them for the rest of their lives, as despite the hardships it’s easily the most intensely personal experience they will ever know.


Through the passing of time, they each get on with their lives, as Jack rides the rodeo circuit in Texas and marries Lureen, Anne Hathaway, a cowgirl who catches his eye, whose father has earned a fortune selling farm equipment, while Ennis marries a local sweetheart Alma, Michelle Williams, a revelation in the film who happens to be Ledger’s real-life wife, adding warmth and personal intimacy, where their scenes together feel naturally lived-in and real.  Neither man is particularly good at fatherhood or family affairs, as each comes from scarred, emotionally deprived backgrounds.  Four years later Jack sends notice of a visit and arrives on Ennis’s doorstep one day, where his wife catches them kissing in an intense embrace, but says nothing.  When they leave together on a supposed fishing trip, pain is etched all over her face, which has a ripple effect to the whole family.  This film expresses the inexpressible.  Ennis knows the times and knows that in this country, neighbors wouldn’t stand for two guys running a ranch together, “This thing grabs on to us again in the wrong place, we’ll be dead,” so their relationship is haunted by a perpetually unfulfilled longing, like a lost Eden, split between the freedom of the wilderness and the restrictions placed on them by a sexually repressed society.  Up until now, the film has a kind of Douglas Sirk, wrenchingly melodramatic feel to it, where the men’s lives unravel and become unhinged in ways that on the surface resembles anyone else’s disappointments, yet their secret visits remain under wraps, something no one can talk about.


Once the years take their toll on the men’s lives, their children grown, their home life in ruins, their visits together a painful reminder of all that they’re missing, only then does the film elevate itself and reach for more, in a stunning confessional scene where they can’t seem to leave each other, where Jack blurts out “I wish I knew how to quit you,” surrounded by the majesty of spectacular scenery, where men are reduced to tears, tiny creatures dwarfed by the immensity of it all, yet what matters most about these individuals suddenly surges to the forefront, demanding our attention and our respect.  It’s a startling moment that takes us a bit by surprise, stunned to realize the complexity of their lives and what they mean to each other only at that moment.  It’s achingly real, and it continues on that brilliantly developed high plain until the end.  While the film is beautifully understated, where the marketing scheme downplays the gay aspect and suggests a “universal” love story, it is unquestionably a gay sexual attraction and love affair, with explicit sex scenes that are both brutally rough and surprisingly tender, where Ennis mumbles “This is a one-shot thing we got goin’ on here,” though both are filled with the Western cowboy ethic that forbids even the thought of such things, where in their minds it’s associated with sordid stories of violence and murder.  Therefore it’s a love kept under wraps, continually closeted and under denial, disguised as a fishing trip, yet it’s a lingering and haunting presence in their lives, where each ends up in a loveless marriage, where loneliness defines their every aching moment, especially Ennis, who only grows more isolated and alone after leaving his wife, eking out a barebones existence working seasonal cattle roundups.  When he receives occasional visits from his older teenage daughter who’s nearly grown up, Alma Jr. (Kate Mara), seen at about the same age as he was in the opening, the film comes full circle, where she’s going her own way and making her own choices.


A story of thwarted love, eloquent in its mute despair, where gay love has never been so sacred, yet what’s most alluring is the magnificent natural beauty of the Edenesque world that surrounds them, where the luxurious color of 35mm film never looked better, making the digital look of what passes for film today look antiquated and ugly, where the entire industry lost its soul by selling out the opulence and grandeur of real film.  Despite their distance, Jack in Texas and Ennis in Wyoming, they come together again and again, year after year in the most remote locations, knowing that if caught they could be hog-tied and murdered by fellow cowboys (a reminder, as B. Ruby Rich explains in discussing the tragedy of Matthew Shepard, of exactly how provisional and geographically specific contemporary tolerance remains), before heading back out into the “real” world of emptiness, alcoholism and disappointment.  There is a plot twist near the end where Ennis’s post card to Jack is returned marked “deceased,” a dumfounding moment that sends him into a tailspin, reflected in the marvelous use of a flashback style moment where he imagines what actually happened as he’s listening to Lureen dispassionately describe what happened to Jack over the phone.  For Lureen it’s a moment over and done with, while for Ennis, the loss is indescribable.  Heath Ledger is astonishing, especially at the end, as he perfectly captures the essence of the poetry that wordlessly expresses love and longing.  The visit to Jack’s parents house, so quiet and spare, is near perfect, elevating the spirit of the man who isn’t there to the forefront, reminding us of the unfathomable depths of the still unexplored regions of love.  It’s a devastating moment and one of the most powerful scenes in all of cinema, tragically haunting the viewer for years to come with weighted emotions and images permanently etched into the core of our very souls.
Posted by Robert Kennedy at 12:00 AM