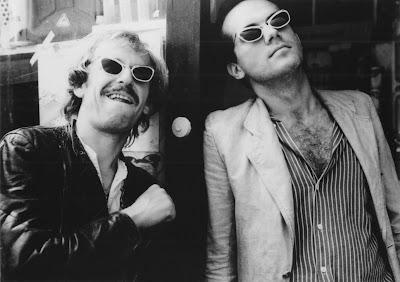 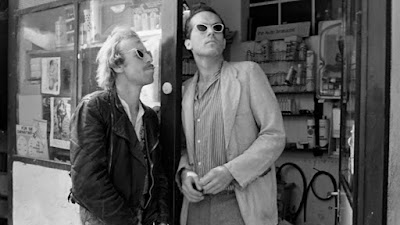 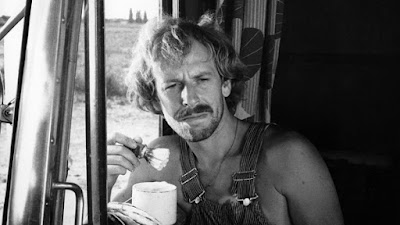 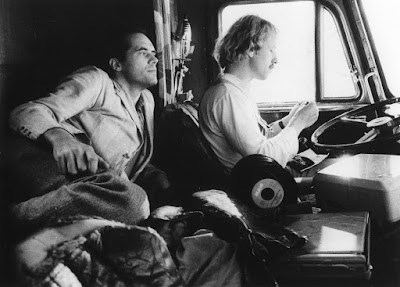 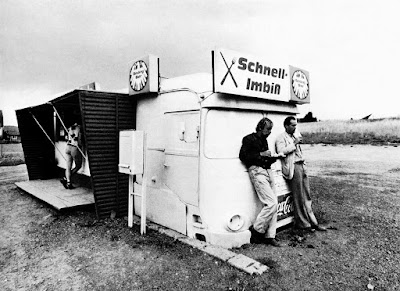 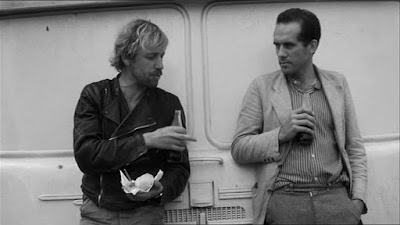 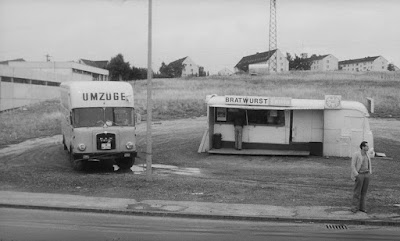 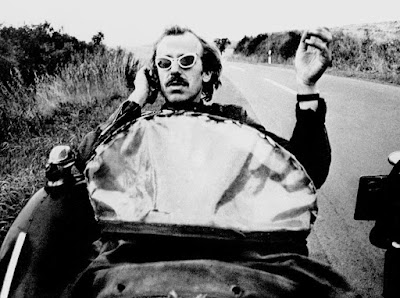 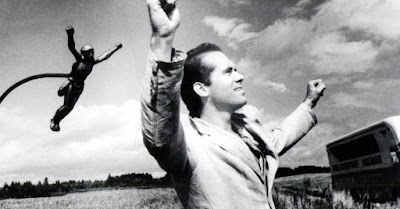 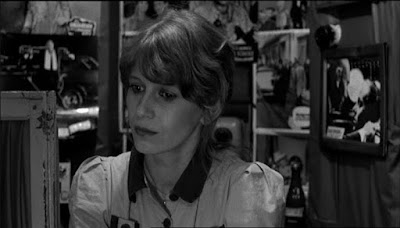 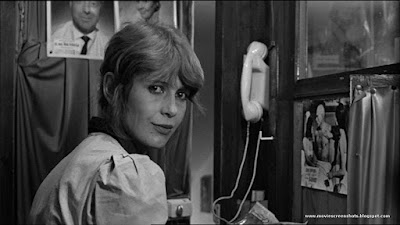 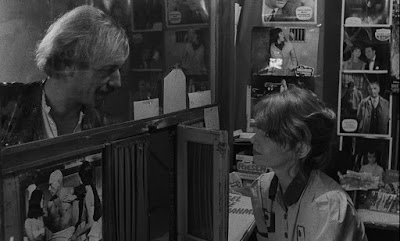 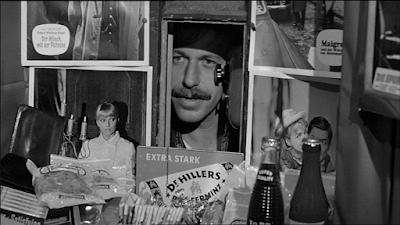 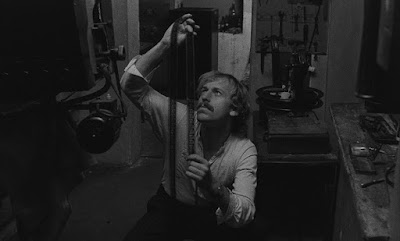 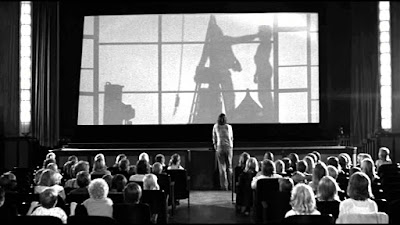 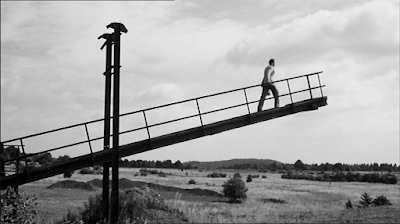 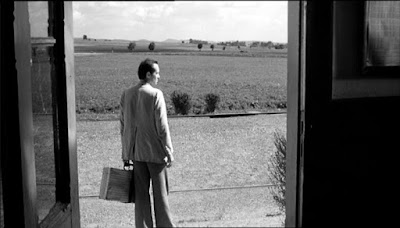 
One of Wenders’ best, clever, existentialist, and amusingly insightful on several different levels, perhaps the only film ever seen where a Volkswagen Bug is driven like a sports car, where it accelerates out of the blocks, screeches around turns, and opens up on the straightaways, blindly flying through intersections at full speed with no regard apparently for the consequences, where the driver (Hanns Zischler) becomes known, affectionately enough, as Kamikaze.  In a memorable opening sequence, he unintentionally hooks up with fellow road traveler Bruno (Rüdiger Vogler), looking a bit like the director himself with that shaggy dog look, who is parked along the side of the road in his live-in moving and storage truck, noted for an illuminated Michelin man doll next to the big lettered emblem above the front windshield, “UMZUGE,” apparently a German reference for a moving van.  Not just a road movie, but more an anthem to road movies, as the three-hour length only accentuates the passing of time, becoming a prominent theme, where the relaxed and leisurely pace never wavers, where the road music is expressed by recurring guitar motifs by Alex Linstädt that couldn’t be more warmly welcoming and upbeat.  Shot along the border regions between East and West Germany, which is listed in the opening credits, along with the correct aspect ratio, of all things, this is a mesmerizing road movie shot in Black and White by Robbie Müller and Martin Schäfer, a film that reaches under the surface to reveal a great deal about the changing face of cinema and Germany’s divided history.  There are plenty of American references as well, mostly in the prevalent use of rock ‘n’ roll music, including English lyrics that they can’t get out of their heads, where at one point the characters remark that “the Yanks have colonized our subconscious.”


This could be seen as a German version of Easy Rider (1969), one where the photographic landscapes often dominate the central characters, where the focus may shift to merging trains with the road, or filming reflections off the truck’s windowshield or side view mirrors, all fleeting images of transience.  Clearly a generational movie, one that identifies with the post 60’s cultural changes and the yearning for individualism and freedom, Wenders brilliantly interweaves into the storyline the lives of several elderly people whose pasts shadow the present, often in haunting yet illuminating ways.  Sleeping on the side of the road in his truck, Bruno roams the country roads as a traveling projectionist, repairing old broken down movie projectors, bringing them back to life, at least temporarily, in the small towns with a sole family run theater that is barely surviving due to the commercial influence of American films in the bigger cities, effectively shutting down the German market and the small town picture shows.  One elderly gentleman, a former Nazi party member who ran a theater back in the silent era, explains he had to petition the government after the war to get his ownership re-instated, explaining there were many who were forced to do the same, wondering what good it did any of them as nobody comes to their theaters anymore.  Bruno and Kamikaze, both estranged from their parents, hit the road together as resourceful, free spirited, and independent minded men who face their responsibilities and the future with a casual air of disregard, instead leaning more towards living in the moment.  Wenders’ brilliance in this film is capturing in detail so many of those moments as they unravel in real time.  Like JULES AND JIM (1962), which (referring to the novel upon which it was based) Truffaut called “a perfect hymn to love, perhaps even a hymn to life,” this film is also a celebration of camaraderie and friendship, but this is post French New Wave, where the joyful energy and exuberance has dimmed and both men are more about living and getting on in their lives with some degree of personal satisfaction.


One of the most beautiful sequences involves a theater partially filled with grade school children impatiently waiting for the movie to start, where the time for repairs only makes the kids more tired and restless, until in a stroke of mad genius, Kamikaze turns on a theater light behind the movie screen, where the two are silhouetted like moving puppets, carrying on a charade of physical comedy and farce which changes the expression on the kid’s faces to utter amazement, as if they’re literally witnessing magic for the first time.  In another extended sequence, Bruno meets a bored theater cashier, Lisa Kreuzer, flirting with her openly, eventually forced into service as the projectionist didn’t have a clue what they were doing.  This is the closest he comes to developing a rapport with the opposite sex, where they end up spending the night in a cramped room above the theater, but not as you might expect, as they’re friendly enough, but they can never find the words to get started, leaving each as devastatingly empty afterwards as the theater itself.  Something should be said however for the growing relationship of the two men, so much of which is unspoken, as they are never actually friends, meeting by chance, and neither ever makes any gut-wrenching confessional speeches to one another, but are merely traveling companions whose days run together as they share experiences, becoming familiar but from a safe distance.  Each man is forced to challenge their own personal comfort zone as perhaps they’re living too comfortably, always passing through the lives of others, but never stopping to take hold of real love or responsibility.  Both end up taking side trips to visit their surviving parents with surprisingly different results, where in both cases we see a gentle side of them that is vulnerable and exposed.


Despite being an open road picture, much of what happens takes place in the cramped quarters of projection booths, the front seat or the tight sleeping quarters of the truck, a lone food outlet on the side of the road, an isolated gas station, or the empty confines of a movie theater, all places where they are either alone, peering through a protected booth, or more likely with one other person.  What this suggests is that much of our lives we are tucked out of reach from others, whether it’s family or friends, our memories, even our nation’s history, as we all deal with as much as we can seemingly alone.  The open road or freedom, when seen in this light, actually prevents close personal involvement with others, as we’re too busy leaving or making our escape.  The projection booths are filled with old movie posters of Brigitte Bardot or Fritz Lang, various pin-up girls, but also faces we have forgotten through the passage of time.  When an elderly woman speaks of her disinterest in the kinds of films being made today, suggesting the audience turns into dazed, stone faced robots, she is really reminiscing about the life and vitality of her era, much of which, due to the negative history of the Third Reich, the rest of the world has denounced or forgotten.  Nonetheless it remains an intense recollection that few other memories in her life can equal.   A disconnection to one’s life, or the past, the divisive nature of which becomes another theme of the film, culminating in an intriguing sequence at a dead end border crossing into East Germany, where they arrive at a vacated sentry station in the middle of the night.  The names of American cities are carved on the walls, where they may as well be a million miles from nowhere, and in a drunken confrontation, they amusingly discuss their vital need for women, which unfortunately comes at the cost of individual freedom.  In the bright light of the next morning, peering over into the vast unchartered territory of East Germany, the border is seen as an inhospitable and foreboding place, a combination of forbidden territory and a promised land on the other side.
Posted by Robert Kennedy at 12:01 AM