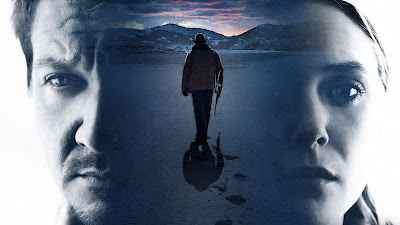 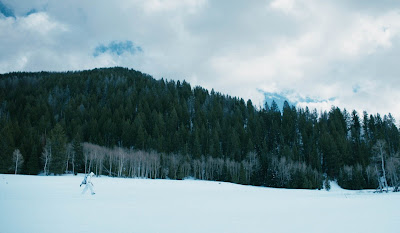 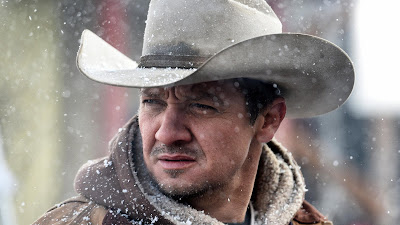 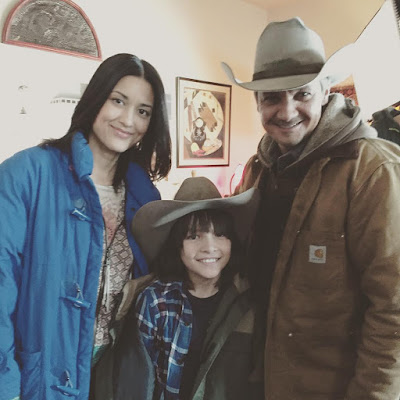 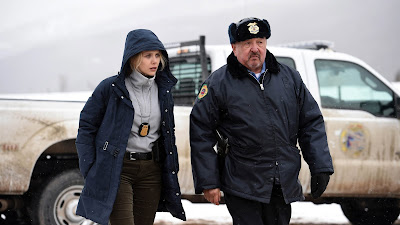 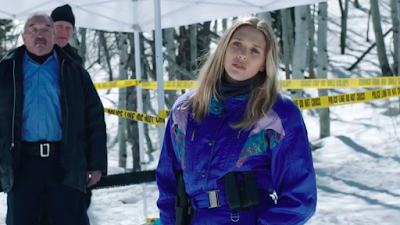 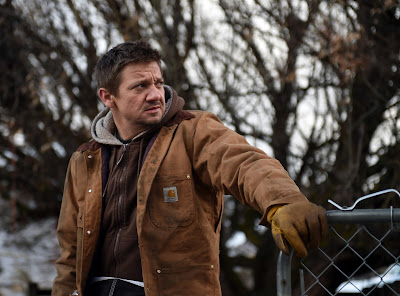 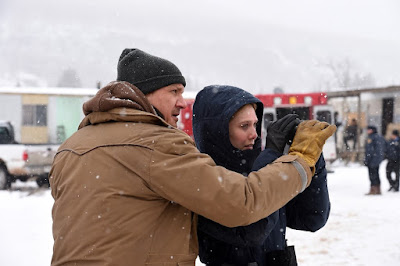 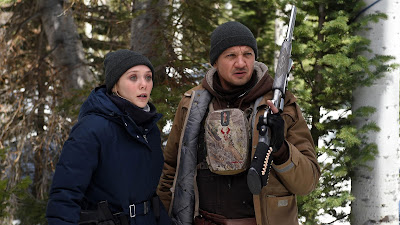 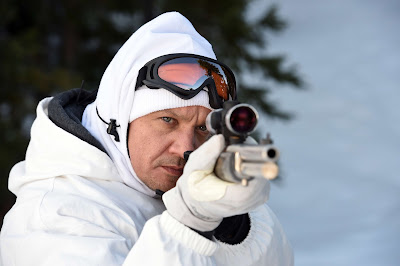 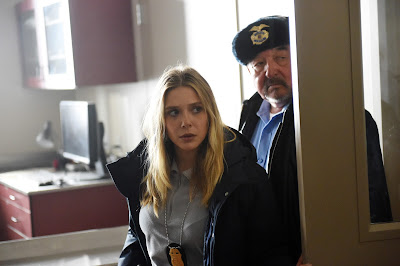 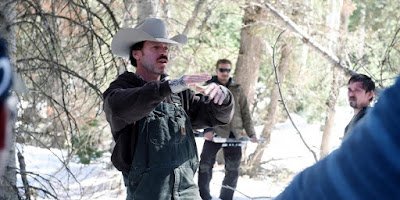 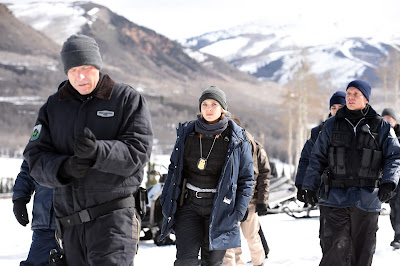 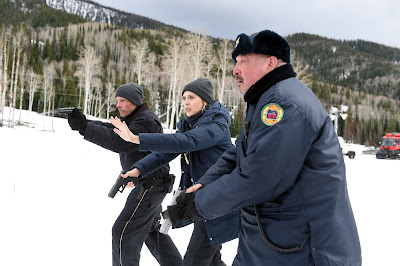 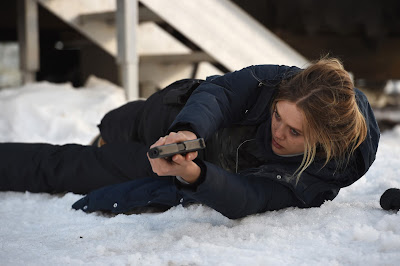 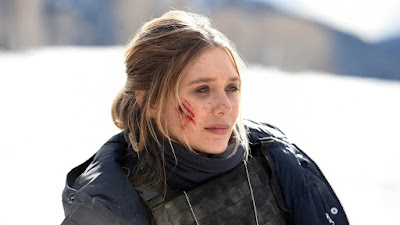 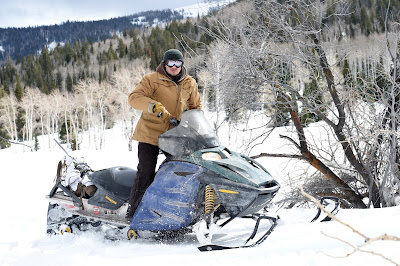 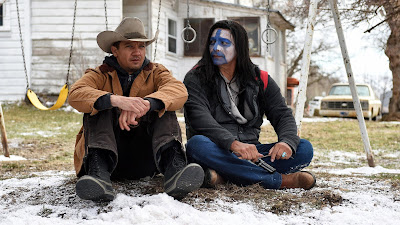 It is the great shame of my nation the manner in which it has treated the native inhabitants of North America.  Sadly, my government continues that shame with an insidious mixture of apathy and exploitation. (...)  There is nothing I can do to change the issues afflicting Indian country, but what we can do as artists — and must do — is scream about them with fists clenched.  What we can do — is make sure these issues aren’t ignored.  Then the people who can effect change will be forced to.
—Taylor Sheridan, Cannes 2017

A film that continues exactly where the writer/director Taylor Sheridan’s last film left off, Hell or High Water (2016), in an endlessly empty landscape seemingly in the middle of nowhere.  Somewhere between the profound disturbances of David Lynch’s nightmarish TWIN PEAKS:  FIRE WALK WITH ME (1992) and the setting of another Tony Hillerman novel, whose evocative mystery stories are set among the Navajos of the American Southwest, this film is set in the Wind River Indian Reservation in Wyoming, home of the Eastern Shoshone and Northern Arapaho Indian tribes, where barren conditions lead to bleak lives, where the high school drop-out rate is 40%, unemployment is 80%, and life expectancy is only 49 years, with suicide rates twice that of the rest of the state, along with rampant crime and drug use, where child abuse, teenage pregnancy, sexual assault, and domestic violence are inescapable conditions arising out of a pervasive sense of hopelessness.  This particular story arises out of a New York Times feature by Timothy Williams in 2012, Brutal Crimes Grip Wind River Indian Reservation - The New York Times, offering a particularly grim view of life on the reservation, challenged by a follow-up letter from an Eastern Shoshone tribal member, Reply to The New York Times Article 'Brutal Crimes Grip an Indian ..., who challenges many of the assertions.  Nonetheless, one of the film’s startling revelations is that no government statistics are kept of missing women on Indian reservations, so no one has any idea just how serious the problem may be.  This particular story dramatically highlights just how offensively denigrating that policy is, showing an inherent disrespect for women, taking great pains to paint an accurate picture of Native Americans, whose personalities are etched in a different kind of history, in stark contrast to others, including their deadpan humor, while openly acknowledging the fatalistic conditions that surround them, yet they find a way to imbue their lives with a quiet dignity, where holding onto their grief is a central part of their lives.  This follows a similar format as Hell or High Water, using a white lead, Cory Lambert (Jeremy Renner), with an Indian sidekick, Ben (the indomitable Graham Greene), the Tribal police chief, where their stoic personalities beautifully offset one another, as if they’ve been ingrained by the same mind-numbing conditions, yet live separate and distinct lives.  Both are excellent here, offering profound insight into survival instincts, where these guys know things the rest of us couldn’t even imagine.  This is an impressive homage to Native Americans without being showy, always paying respect to their way of life and the kinds of things they’ve learned to value in their lifetimes.

The film has an ominous opening, with a woman running barefoot across a frozen tundra, which is followed by wild predators closing in on their natural prey, as a pack of wolves creeps ever closer to a herd of goats in another snowy landscape, but in this case, one of the wolves is picked off by rifle fire, and then another, until the final one runs away.  From behind a row of sage brush, we meet Cory Lambert, an agent of the U.S. Fish and Wildlife Service, hired to track down animals preying upon local livestock, where he’s an expert tracker and a sure shot.  In the course of his observations, he notices mountain lion tracks that lead him to a frozen corpse, a young 18-year old girl he recognizes, Natalie, Kelsey Asbille (Eastern Band Cherokee), who’s been sexually violated.  Reporting the incident, the reservation police call in the FBI, as homicides on Indian land are classified as federal crimes.  Meanwhile, he stops off to pick up his half-Indian son from his ex-wife, Wilma (Julia Jones), who are Arapaho, to take him to his grandparents, where there are eerie photographs of another girl that same age on display in the house.  This scene is beautifully staged, as there is an uncertain divide between the former couple, suggesting something went terribly wrong, as a wounded expression is written all over their faces, but nothing is spoken about it, only the photographs reveal the brokenness of their lives.  Afterwards we learn they lost their only daughter in similar fashion, where the two girls were once friends.  This anguished silence runs dead center throughout the film, where we’re never far from its influence, as people are forever haunted by their absence.  Even his son is worried that something will happen to him, where he has to reassure him that the girls just got lost in the snow.  By the time the agent arrives, FBI Agent Jane Banner, Elizabeth Olsen, so good in the indie thriller 2011 Top Ten Films of the Year #5 Martha Marcy May Marlene while also excellent as Jack Kerouac’s would-be wife in Kill Your Darlings (2013), arrives in a near comical entrance, having flown out from Las Vegas in heels and a windbreaker as the nearest agent, where she has no snow gear and would perish in the cold under these conditions.  Her unfamiliarity with the region is reflective of the government’s blind view of Indian culture, as they continue to exhibit so little understanding.  The autopsy reveals that despite evidence of an attack and considerable frostbite to her hands and feet, extending to her legs from prolonged exposure, her lungs burst from inhaling sub-zero air, where she was obviously running to escape something horrible.  As a result, this is not considered a homicide, so it reverts to tribal jurisdiction, where the agent sticks around, with the help of Lambert, pursuing all leads.  The dead girl is the daughter of one of Cory’s friends, Martin, Gil Birmingham (Comanche), in another expertly staged scene, again showing a stark contrast in the way grief is handled on the reservation, something that totally dumbfounds Banner (and the viewers), remaining absolutely clueless about tribal ways.

Part of the backstory of the film was a contribution of $10 million dollars from the Tunica-Biloxi Tribe of Louisiana, which was more than 90% of the budget, making this a rare instance when Indian tribes invested money in motion pictures, which apparently influenced a more accurate depiction of Indian culture.  This is another film scored by Nick Cave and Warren Ellis, among the best in the business in creating anguished moods in quiet tones, combined with extraordinary outdoor cinematography by Ben Richardson that immerses viewers in the wintry chill of the film.  This haunting atmosphere, though shot largely in Utah, is an effective setting for the film, feeling like you’re at the end of the road, as if civilization ends here, as it’s all wilderness up ahead, reminiscent of older westerns like André de Toth’s Day of the Outlaw (1959) where hostile outdoor elements become a central character in the film, eventually consuming the featured characters in a picture of doom.  Something similar happens here, but it’s much more open ended, offering more than a glimmering ray of hope, yet the characters embark on a similar trail.  This is a film about searching for answers, including some that have become ingrained into the mindset of the characters who are all too familiar with what happens here, including a younger generation that has lost their way, as drugs mixed with criminality become a lifestyle, where these kids are the picture of dysfunction, even in such a raw and primitive setting where there is little police presence, where the depiction of the reservation’s lost boys is eerily similar to the picture of Ciudad Juarez in Sicario (2015), an earlier film written by this director.  This investigation takes on a similar labrynthian journey exposing the kinds of hidden corruption that monopolize places like this, where our nation has an ugly history with Native Americans, blinded by greed and an insatiable desire to rob them of their resources.  For a writer renowned for writing dialogue, what stands out here is the minimal yet extremely effective use of dialogue, where Ben reveals the essence of what it’s like living there, “We have to drive 50 miles to go five, welcome to Wyoming.”  Splitting up, Ben and Jane head for an oil rig to find the victim’s white boyfriend, while Cory sets off in a snowmobile to pursue tracks in the snow, telling Jane, “You look for clues, but you need to look for signs.”  What follows is a mysterious glimpse of outsiderism, as these guys working the oil rigs are a piece of work, leading to a brutal confrontation mixed with a flashback sequence that precedes the young woman racing barefoot through the frozen snow in what amounts to a nearly incomprehensible six miles, something few could do, yet emblematic of an astonishing kind of heroism that will never get recognized.  We soon discover that when a Native American is raped by someone who is not a member of her tribe, tribal courts cannot prosecute, which may explain why Native women are 2.5 times more likely to be victims of rape and sexual assault than any other ethnicity.  Expressed throughout with unusual sensitivity, the contemporary aspect of the film reveals a profound and gripping reality about the complexities of relationships between different peoples and cultures, where some gaps will simply never be bridged.
Posted by Robert Kennedy at 12:43 AM