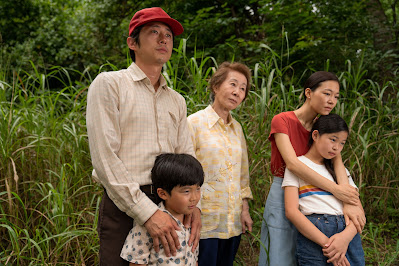 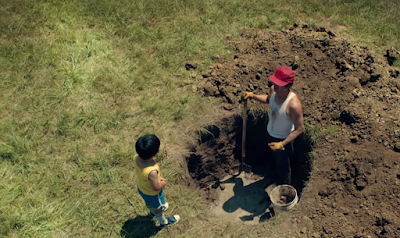 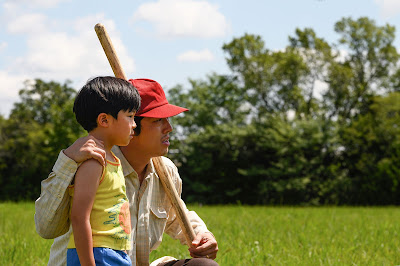 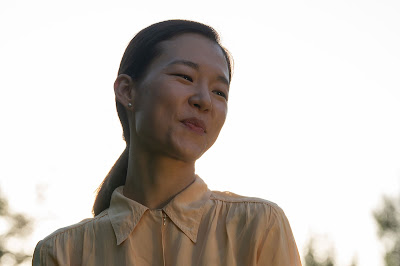 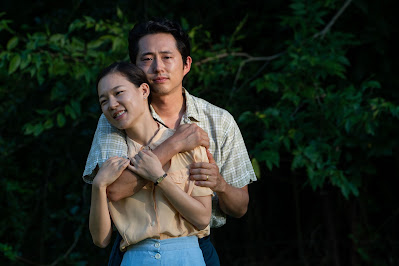 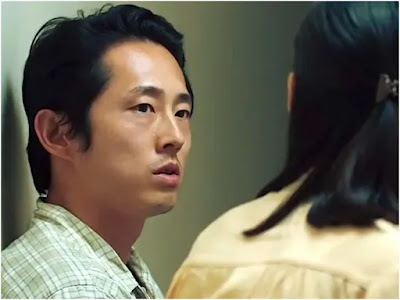 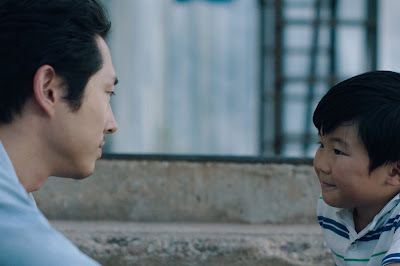 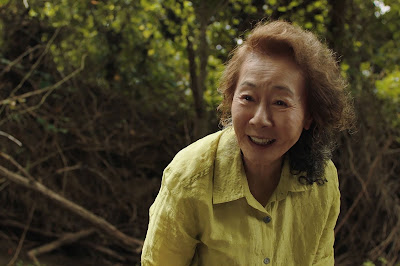 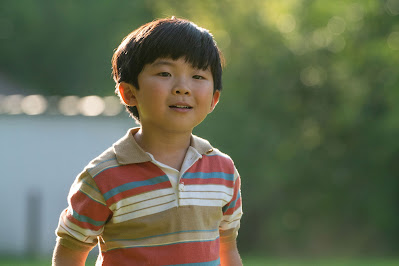 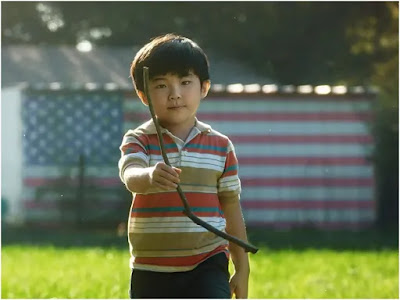 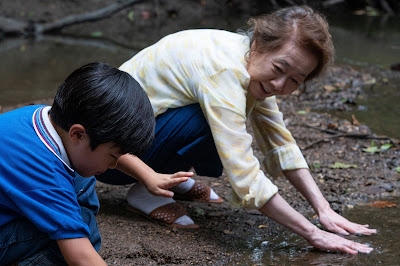 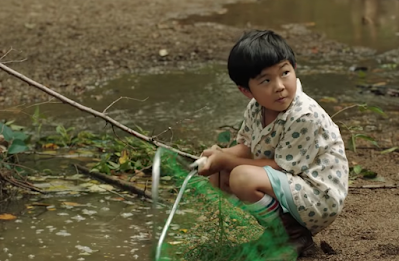 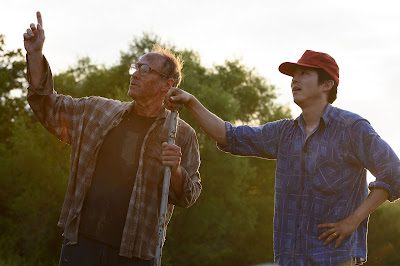 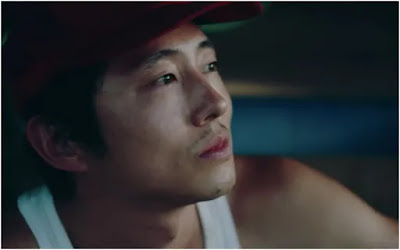 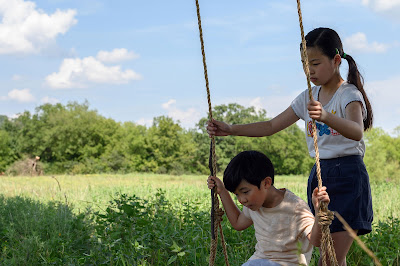 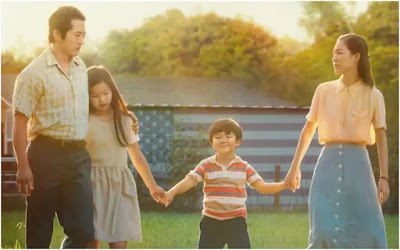 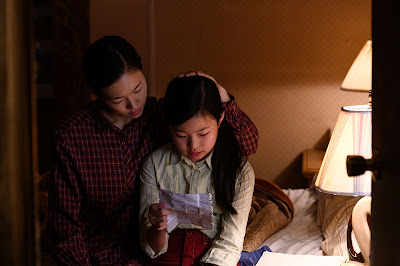 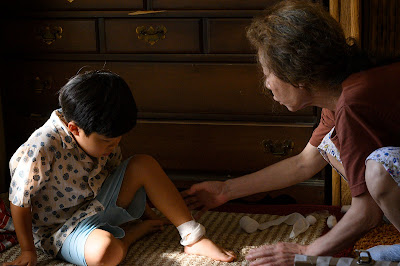 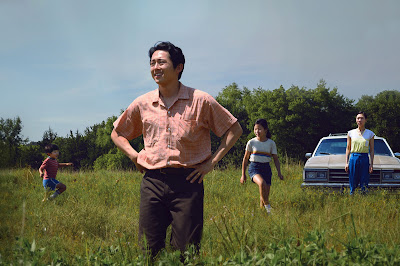 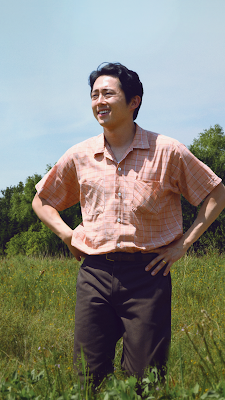 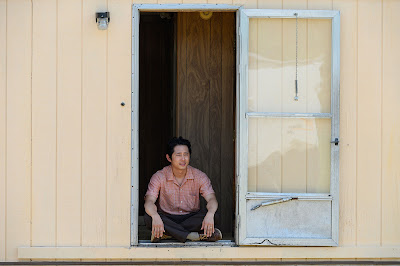 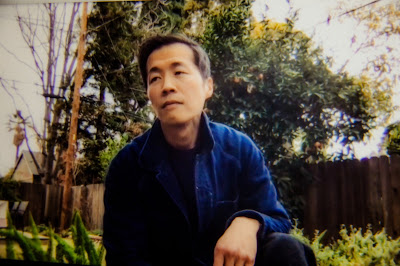 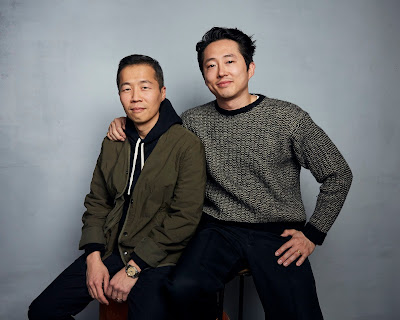 A troublesome family drama that follows a Korean-American family move from California to rural Arkansas in pursuit of the American Dream, starring Steven Yeun from Lee Chang-dong’s 2018 Top Ten List #8 Burning (Beoning) as the overly optimistic husband Jacob Yi and Yeri Han as the hesitant wife Monica who is shocked to see their new home is a mobile home on wheels set in the middle of nowhere.  Filmed in and around Tulsa, Oklahoma, they bring along two kids, Anne (Noel Cho), the dutiful older pre-teen sibling to 7-year old David (Alan S. Kim,) who has a serious heart defect, where we’re told “his heart could stop at any moment.”  Monica is concerned that the nearest hospital is more than an hour away, and is worried they will go broke, like the last farmer on this same plot of land, preferring life in a city where kids can play in a neighborhood setting close to a school while emergency facilities are never far away.  But Jacob was inspired by the open land and the chance to grow their own food, where his idea of a garden grows into a farm, hiring a dirt poor nearby neighbor Paul (Will Patton), a Korean War veteran, to help out as needed, making use of his tractor, where the two work long hours into the night.  This backbreaking work is in addition to their regular jobs working on a chicken hatchery performing the tiresome, mind-numbingly tedious work of endlessly separating female chicks from the males, discarding the males which are of no use, while keeping the egg-laying females.  Realizing Monica has no friends and no one to talk to, they start to attend church, where they are the only immigrant family, yet they are immediately accepted and embraced into the community.  Based on their clear differences of opinion, which Monica never lets him forget, the two ceaselessly argue in front of the kids, who grow weary of their bickering.  To try to quell the storm, Jacob brings in Monica’s mother from Korea to live with them, Soonja (Youn Yuh-jung), someone to look after the kids while they’re at work all day, but Grandma has a potty mouth, watches professional wrestling on TV, and loves to talk smack when playing cards, relishing her victories at their expense, causing David to believe she’s not a “real grandma” as she doesn’t bake cookies or act like one, claiming she snores and “smells like Korea,” though they eventually grow close, as both delight in eccentric misbehavior.  The film is a semi-autobiographical take on Chung’s own upbringing, where the director himself was a first-generation Korean immigrant growing up on rural Arkansas farmland in the 1980’s and shared the same heart defect, studied at Yale and planned to go to medical school before deciding to become a filmmaker, while the plot similarly follows a family of South Korean immigrants who try to make it in rural America during the Reagan era of the 1980’s.  After a decade of high inflation, rising gas and oil prices, and Cold War embargoes, American farmers were losing their farms, so it was a time when Willie Nelson, Neil Young, and John Mellencamp organized the first Farm Aid concert in the heartland of Champaign, Illinois in 1985 (which I happily attended) to raise awareness about the loss of family farms and to raise funds to keep farm families on the land, so there was a patriotic push to value and honor farmers at the time.  The director of MUNYURANGABO (2007), reviewing the aftermath of Rwandan genocide through the eyes of children, was profoundly influenced by the writings of Willa Cather, an early 20th century Pulitzer Prize-winning novelist who wrote about life on the Great Plains, capturing the spirit of the original westward heading pioneers, many of them coming from immigrant groups, where the simplicity of ordinary life prevails.

While this is told in an overly conventional style, no surprise there, what is concerning is the lack of dramatic impact, as this may be a bit too understated and low-key, despite the heaps of praise affiliated with this film, winner of the Grand Jury Prize at Sundance in the U.S. Dramatic Competition, winning the Golden Globes Best Foreign Language picture (disqualified as an American Best Film due to the prevalence of Korean language), nominated for 6 Academy Awards, with Yeun the first Asian-American nominated for Best Actor, with the elderly Youn nominated for Best Supporting Actress, this is only the second Korean-language film to be nominated for Best Picture, following all the hoopla associated with Bong Joon-ho’s Parasite (Gisaengchung) (2019).  While the year or so of Covid may have led to a remarkably weak field, it’s still surprising that this film has been heralded as one of the best, as it simply doesn’t compare with the better immigrant stories, even in recent years, which would have to include the works of Roberto Rossellini, Elia Kazan, Rainer Werner Fassbinder, Jan Troell, Ousmane Sembène, Martin Scorsese, Fatih Akin, Pawel Pawlikowski, and the Dardenne brothers, among many others.  While it does have its own personal touches, much of it seen through the curious eyes of the children, it’s never emotionally moving or involving, largely due to the incessant negativity coming from the wife, whose shrill nature prevents viewers from embracing this story, as she’s constantly undermining the rather heroic efforts of the husband working two jobs simultaneously, never once embracing his efforts, his dreams of growing Korean produce in America, or his everpresent positive spirit, always cutting him down, continually blaming him for the breakup of the family, which is on the verge of separation from the onset, as she refuses to accept the rural locale, preferring to move back to California.  In fact, her lack of emotional support is the central theme of the film, overriding everything else, overshadowing the apparent optimism behind this film.  Even the bland musical score from Emile Mosseri is never inspiring, which is a huge let-down, as there are plenty of quiet moments that could use an emotional push.  From the outset Jacob is proud of his Korean culture, teaching his son to rationally use his mind, declining the mythical services of a professional water diviner, believing he can dig a well on his own property just as easily for free, which he does, but it also soon runs dry, as it’s not a real well.  Wounded pride aside, he connects into a county water supply and pays for the use of water, spending it all on his crops, then shutting it off when it comes to his family’s needs, which has his wife fuming.  Everyone (with the exception of the older daughter) has their flaws, as David pees in his bed at night, with grandma claiming his penis is broken.  As if to offer a remedy, Soonja, using seeds she brought from home, finds a nearby stream and plants minari on the banks, an edible plant, otherwise known as Chinese celery or Japanese parsley, herbs commonly used in Asian diets.  Grandma (who removes the $100 bill her daughter places in the church collection plate) even encourages more physical activity by David, allowing her grandson to just be himself, as it brings him happiness, contradicting the safer and more repressively cautionary measures implemented by his parents, who won’t allow him to run.

The film isn’t so much about assimilating, but adapting and making their own way, establishing roots in a community, but for that they need to believe in a dream of being successful.  When first the water supply dwindles, followed by successive days of 100 degree heat, and then their first order gets cancelled, leaving fresh produce and nowhere to move it, they are tested like Job seemingly every step of the way, with Jacob and Frank doing yeoman’s work to harvest and save the crop.  If you’re in the farming business, having buyers of your produce seems like the first order of business, but it all happens haphazardly here, where the gist of the film is encountering unexpected obstacles, with Monica watching the money disappear while they’re scrambling to make ends meet, consumed by preventing that next disaster which could wipe them out.  It’s a tenuous relationship with the land and soil, also between themselves, while also being accepted in such a close-knit, small-town community, where they don’t look like everyone else.  At one point, one of David’s friends asks him why he has such a flat face.  It’s not easy being different.  The portrait of the neighbor Paul reveals the extent of how an outcast looks and acts, as he doesn’t attend the church in town, but practices his Pentecostal religion in his own way lugging a wooden cross across the highway on Sundays, bearing his own heavy burden.  He regularly performs exorcisms whenever and wherever he sees a need, outing evil spirits.  In much the same way, Jacob’s faith is continually tested, walking that fine line where his dreams could either save or destroy his family, always having to question whether he’s made the right choice.  In good times it looks like he has, but in bad times a looming disaster lurks just over the horizon threatening to take everything away.  That’s the nature of farming, where you can’t predict the future, as every season isn’t bountiful, yet some seasons are, where there may be some lean years in between, but you keep at it.  While the film is surprisingly free of racial animus, living in an almost too perfect world, Anne, with no conceivable friends, a budding teenager in the middle of nowhere with absolutely nothing to do, gets shortchanged here, as her character isn’t explored nearly as much as David, where he and Grandma kind of steal the show.  Jacob’s desire is for David to have the strength and mental stability even after he’s gone, while Monica is more concerned about his eternal salvation, urging him to pray to see Heaven and awaken healed, living in constant fear that he could suffer an early demise, a fear that is inadvertently transferred onto her son’s tiny shoulders.  She is representative of the here and now, where happiness is based on understanding what she sees, while he is swept up in the possibilities of what hard work can bring, hoping for a financial breakthrough which would provide longterm security for this family.  At one point the parental divide is so prevalent that Monica is about to take the kids back to California with her, but disaster strikes, pulling them together in ways they could never imagine.  Without resorting to a full-fledged melodrama, this is a heartwarming film that offers a sweet and melancholic look at the immigrant experience through the eyes of the immigrants themselves, with its tender moments, yet no big scenes, no emotional build-up to cathartic or transcendent moments, just a realistic glimpse of small yet significant moments in their lives, revealing just how fragile the experience can be.