By the Time It Gets Dark (Dao Khanong) 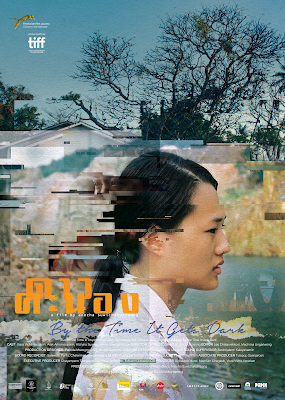 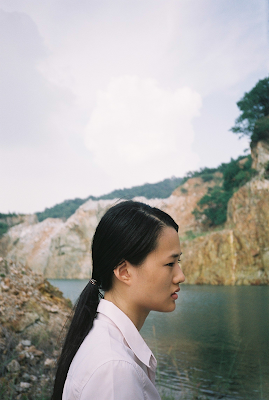 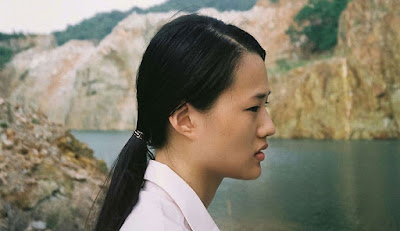 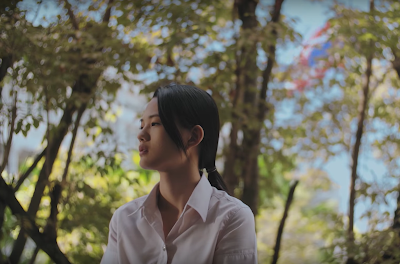 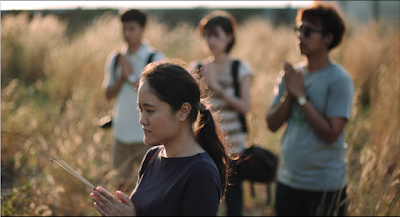 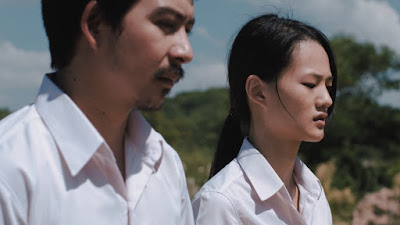 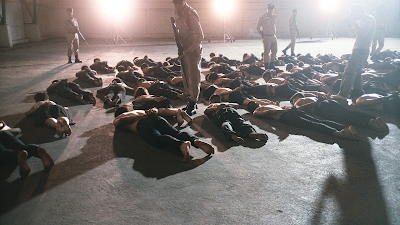 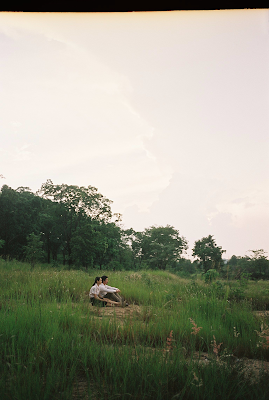 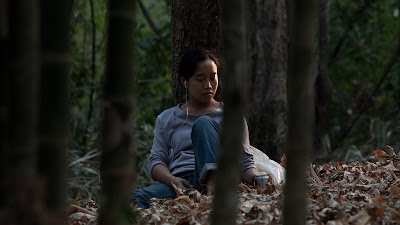 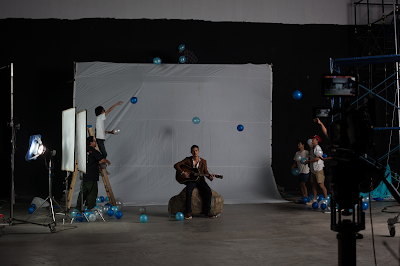 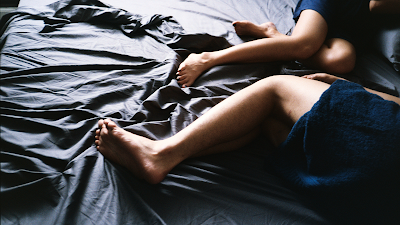 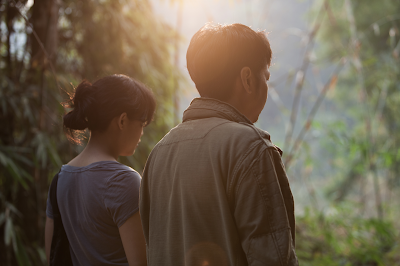 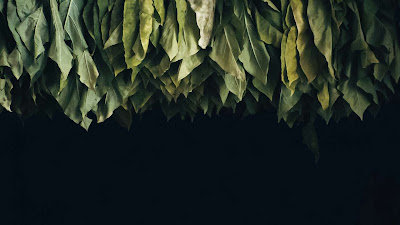 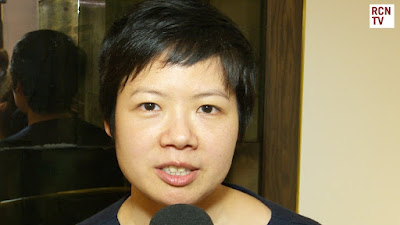 When we saw something unjust, we protested, unlike nowadays.
—Taew (Rassami Paoluengtong)

While the title suggests a horror theme, or some impending doom, the film only hints at what it’s about, seemingly hidden behind veiled thoughts and images, as if free speech is not something available to this filmmaker (who received her masters at the Columbia University Film School), suggesting she could potentially be arrested under a militaristic governmental regime, so thoughts and ideas are intentionally clouded, where the truth lies safely protected behind guarded thoughts.  What this implies is that Thai artists continue to wage war against government censors, where after the assumption of power by a military junta in the May 2014 coup d'état, the National Legislative Assembly is militarily appointed, where artists and political dissidents become easy targets, much like living in the era of the East German Stasi secret police, where blatant government criticism is considered a crime, arresting and imprisoning violators until they sign an agreement not to engage in political activity.  Thai director Apichatpong Weerasethakul, Cemetery of Splendor (Rak ti Khon Kaen) (2015), has had his own incidents with government censors, especially his frank depiction of sex scenes or gay love, with nearly all his films being banned or receiving only limited screenings in Thailand, despite the worldwide acclaim his films have received elsewhere.  Thailand remains a monarchy, ruled by a king and his royal family, where it’s currently punishable by fifteen years in prison for criticizing the king or insulting the royal family, with more than 100 charged in the past few years, where just this month a Thai man was sentenced to 35 years for his Facebook postings, (June 9, 2017, Man jailed for 35 years in Thailand for insulting monarchy on ...), a particularly draconian act.  So what this film actually represents is a camouflage of intentions, masking criticism with artistic subterfuge, creating an illusory world that for all practical purposes is opaque and hard to read, often feeling meaningless, unless you’re willing to dig deep enough.  It’s difficult to evaluate films under these circumstances, though it’s nothing like Dreyer’s DAY OF WRATH (1943), shot during the Nazi occupation of Denmark, or Rossellini’s ROME:  OPEN CITY (1945), shot in the immediate aftermath of war, and is probably closer to what Iranian filmmakers are forced to endure, some of whom are currently under house arrest.

While the approach used is fictional, restaging an historical atrocity on a movie set, while stage hands with bullhorns are shouting at the soldiers to be more cruel, the reference is to the 6 October 1976 massacre, a particularly brutal retaliation to student demonstrators outraged at the return from exile of a formerly disgraced dictator, with police charging the students insulted the Crown Prince in their exaggerated mockery, opening the floodgates to government-sanctioned militia groups to respond to this perceived insult, with 4000 to 5000 students arrested at Bangkok’s Thammasat University after a morning firefight rounded up and herded students into a soccer field, where they were stripped to the waist and handcuffed, with some of the wounded bleeding to death as they were forced to lay on their stomachs, many others were shot and killed, reportedly as many as 100, while others trying to escape were beaten to death by a surrounding angry mob, a few were strung up to a tree and hanged, while others were burned alive.  It’s a particularly grotesque incident that remains an unspoken and taboo subject for Thai citizens.  Accordingly, the scene shifts to a peaceful retreat in the country where filmmaker Ann (Visra Vichit-Vadakan) is interviewing a writer who was a former activist, Taew (Rassami Paoluengtong), recalling her memories of the event in question, using flashback sequences to portray a younger version of herself at the university, though there’s no real connection, just a skip in time where the director uses a completely different set of actors to portray a reality that is being remembered, though we’re never sure if this is Taew’s recollection or the director’s recreation of events.  Continually blurring the lines between memory and truth, the director even resorts to waking dreams, as Ann wakes in the middle of the night only to meet a future version of herself sitting silently with a much younger version of Taew, while all three sit and collectively sip tea together.  Reality is intertwined with these elusive memories, as in an otherwise random moment, Nong (Atchara Suwan), a recurring character initially seen as a waitress at a café overhears their discussion, wondering why a film director was writing about events that actually happened to Taew, who is herself a writer, suggesting she should be the one writing her own memories.

A visit to a nearby farm reveals how they grow local mushrooms, using time-lapse photography as we watch their sudden growth, which morphs into an early Georges Méliès classic from 1902, Le Voyage Dans la Lune, "Le Voyage dans la Lune" George Méliès 1902 (Original version ... (13:56), seen around the 9:30 mark, with giant umbrella mushrooms incredulously sprouting on the moon, perhaps suggesting hallucinogenic properties.  Without any warning, a completely new set of characters appear onscreen, as if from a different movie, where Peter (Arak Amornsupasiri) is seen harvesting tobacco leaves before he’s cleaned up and suddenly becomes a famous pop star, seen shooting a music video before hanging out with friends, also seen reading a movie script written especially for him, where he obviously lives a privileged existence.  As if in contrast, Nong is seen in anonymous roles, a cleaner in an upscale hotel, a server on a river cruise ship, seen in a momentary pause looking at the city passing by while adrift on the water, where the stunning cinematography by Ming Kai Leung recalls the breathtaking beauty of Bresson’s Four Nights of a Dreamer (Quatre nuits d'un rêveur) (1971), before seen again with her head shaved doing chores at a Buddhist monastery, with repeated images of the back sides of closely shaved heads, yet one of the more intriguing scenes shows her as a spectator at a live musical show, where a kaleidoscope of lights explodes above her head, leading to what amounts to the scene of the film, an abstract digitalized montage of a projector breakdown, a corrupt, pixel-exploding electronic distortion recalling the final shot of Monte Hellman’s Two-Lane Blacktop (1971), where then it was celluloid melting onscreen.  This momentary disruption suddenly transforms into a florescent landscape of lush green foliage, though the sky is blood red-colored, holding the shot until the color is slowly corrected, finally turning into a blue sky.  Perhaps the unknown variable in all this is the unsung presence of Nong throughout the film, who bears a silent witness without comment, where even the film title appears to be randomly selected, as near the end, a car on a city expressway passes by a road sign that reads Dao Khanong, which is a neighborhood in Bangkok.  Despite the strange, seemingly stream-of-conscious turns in the film, where any hint at a narrative becomes increasingly detached until it all but disappears into a deep void, quite possibly the never mentioned “black hole in Thai history,” as described by the director.   While seemingly intriguing, by the end, little of this makes sense, as Thai films, including Weerasethakul’s latest, tend to be inert, emotionally empty, and unengaging, without an ounce of dynamism.  This is painfully evident throughout, where the film never establishes an internalized connection with any of the characters, nor does it attempt to provide a depth to match the more sophisticated visual imagery.  This aspect of humanism is simply missing.
Posted by Robert Kennedy at 12:02 AM