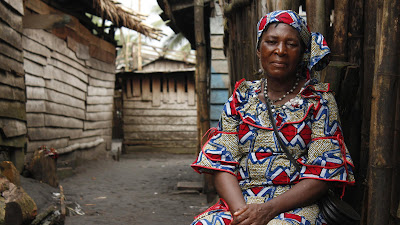 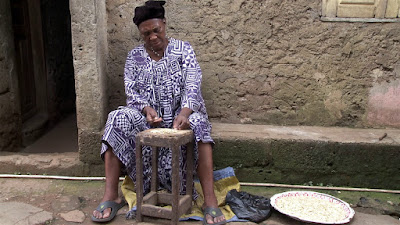 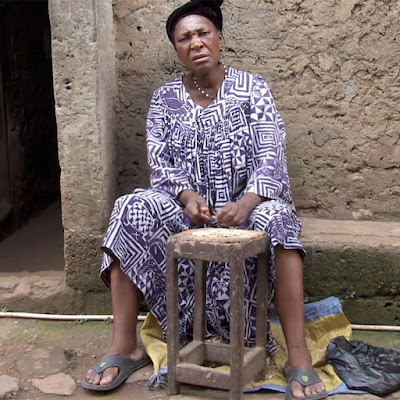 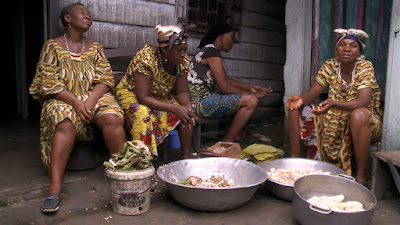 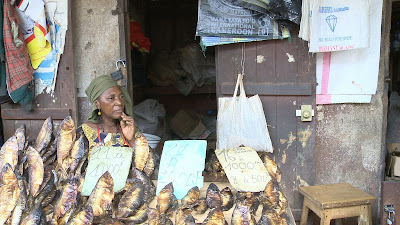 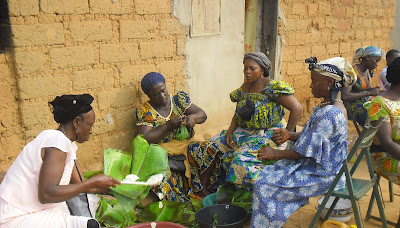 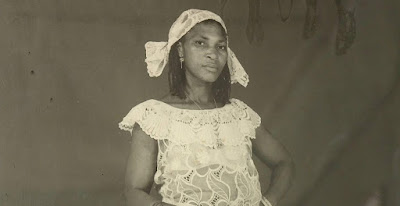 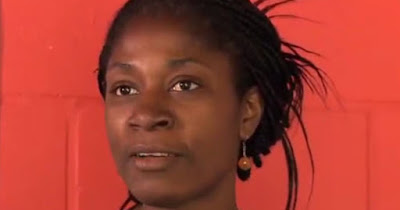 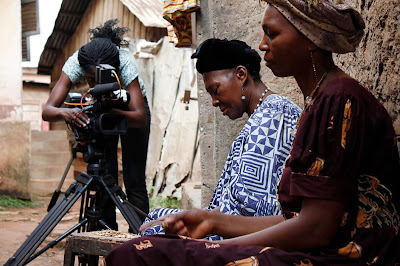 The director shooting on the street 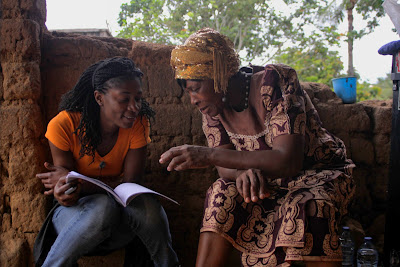 The director (left) sharing a moment with her mother

An autobiographical portrait of African identity and female empowerment, offering an outsider’s perspective, though the filmmaker was born and spent her childhood years as a Bamiléké woman in Cameroon, but left to study abroad in Belgium, marrying a European man and having a child, returning ten years later to more closely examine the community she left behind, largely built around her mother and aunts, using a cinéma vérité style to document her mother’s daily life, while introducing her young son Malick to his grandmother.  With the filmmaker behind the camera, the construct is largely an ongoing dialogue between a mother and daughter, with the daughter continually asking probing questions that can be heard as she follows her mother around in her regular routines, offering a glimpse into African culture from their own perspective.  While the film is nonfiction, it resembles Abderrahmane Sissako’s WAITING FOR HAPPINESS (2002), set in Mauritania, a port city in Africa located on the sea, where large ships are constantly seen moving in and out, mirroring the population flow, as a former resident who has been living in Europe returns back home to his family, but is barely recognized, mocked for losing the African dialect.  Alienated from the world at home where he is not embraced, he is equally out of place in Europe, leaving him alone in a no man’s land, not really fitting in anywhere.  While the circumstances are similar the outcome is far different due to a more personalized relationship between a mother and daughter, constantly eliciting more information, filling in the missing pieces, providing a universal narrative, so what would otherwise be unfamiliar territory becomes readily accessible, even to viewers.  It’s a shockingly personal way to blend family experiences into a collective African history, providing a necessary yet understandable backdrop in one’s search for African identity.

Opening in the darkness as the camera moves along a lone highway at night, the filmmaker offers her own poetic narration, bringing to light the hidden history of her family and the surrounding community, having survived a long, protracted struggle to gain independence from the French colonialists, also known as the Bamileke War, having endured French atrocities when young men were stolen right out from underneath their families by French soldiers for forced labor and women were kidnapped, only to be sold on the streets for arranged marriages.  While these are stark revelations, they’re just part of her mother’s story, who grew up in the bush and remembers hiding in the forest to avoid the French, having endured an arranged marriage at age 18 with a man who took three wives, getting along reasonably with the second wife, but the third disrupted all family harmony, showing little interest in the others, thinking only of herself.  Revealing the cramped quarters of this now abandoned home for the camera, she reveals she kept sleeping on the tiny bed even after her husband died, though she eventually moved into the larger, more comfortable bed.  One by one she proudly reveals the colorful array of mourning clothes she wore for each family funeral, as so many were lost while she was gone.  Showing his grandfather’s gravesite to Malick, the absent family reconnects with what they missed, examining the contents of her father’s suitcase, including his official documents and papers, which her mother could not read as she is illiterate, so the filmmaker herself identified each one.  In explaining her remarriage, in order to stop unwanted male pursuers and any further sexual relationships, she married her co-wife’s son to avoid having to live under the thumb of another man, confessing she didn’t want another man in her life.  Sitting around peeling plantain, her mother and aunts speak openly about their marriages to husbands chosen for them by their father, a continuing practice that disregards the interests of women by stifling their voice.

Taking her spot in the local market where she sells fish, obtaining a booth requires persistence and regular rental payments, as each stall is considered valuable, an economic lifeline offering opportunities.  What the director remembers from her childhood experiences was the value of the newspapers her mother used to wrap the fish, where reading stories took her to other parts of the world, allowing her to escape from the routine.  While sitting in the market glancing at the newspaper, her mother recognizes a picture of the sitting president, expressing little interest in politics, or even voting, as there have only been two Presidents since independence in 1960, with the current man in power since 1982, so there are few, if any, options, providing a certain stability, but a lack of new ideas, feeling totally ineffectual.  On the other hand, what is arguably the most interesting aspect of the film is attending a tontine meeting, a gathering of women with mutual interests, who have figured out that it’s better to pool their resources than to handle expenses individually, seen taking up a collection for specific needs, so everyone has access to food, schooling, and the regular payment of essential bills.  Originally meeting in their home when she was a child, they’ve raised enough money for a separate space, and as all the women are lined up together the filmmaker reads the Maya Angelou poem Woman Work, adding a contemplative tone to the proceedings, where the director personally thanks them for their sacrifice, their resilience and sense of purpose, as without their collective efforts, she would never have been able to attend school abroad.  This film is kind of a thank you for the group’s efforts, showing how they can overcome financial obstacles and achieve greater goals, leading the director to a more liberating future as a filmmaker, providing the necessary tools to tell the truth about their existing reality as she attempts to decolonize Africa from its stereotypical place in cinema.  Since her mother had only seen one film in her life, something viewed as a young girl, she takes her to see Senegalese director Ousmane Sembène’s landmark film BLACK GIRL (1966), revealing the toxic effects of colonialization (which she remembers all too well), with the rich rudely putting their servants in place, constantly reminding them of their lowly status, dashing any hopes for dreams, something this film hopes to remedy, providing an introspective yet honest portrait of the Bamiléké people, providing a sense of solidarity and purpose.
Posted by Robert Kennedy at 12:00 AM