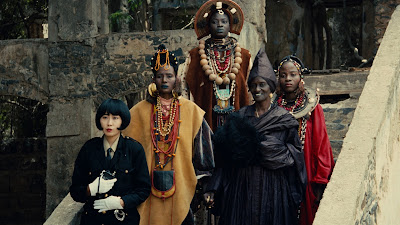 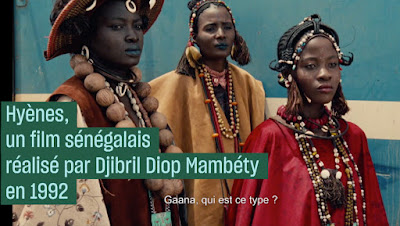 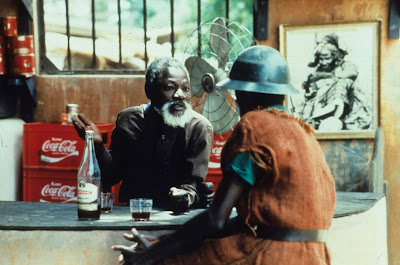 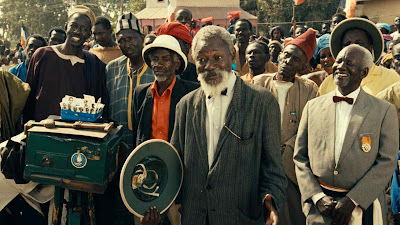 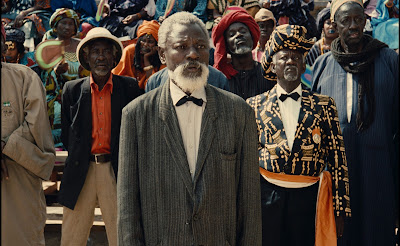 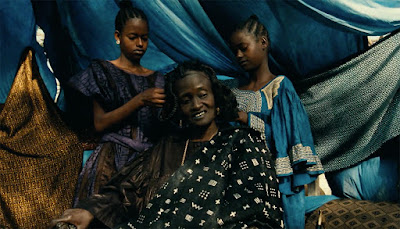 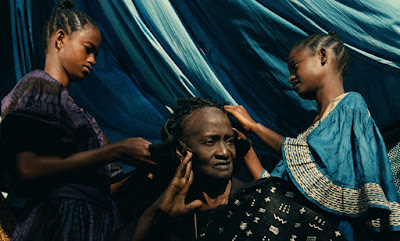 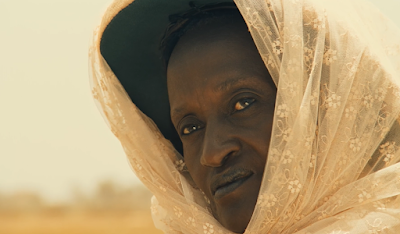 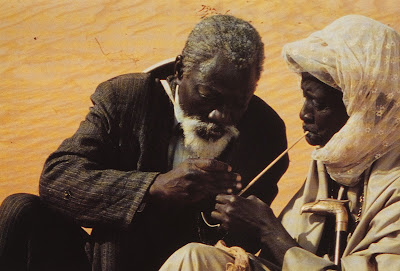 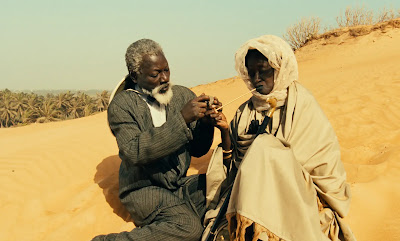 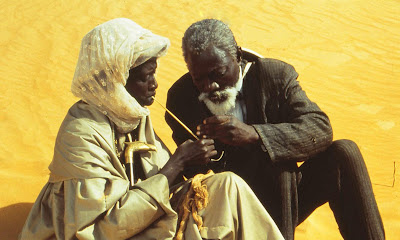 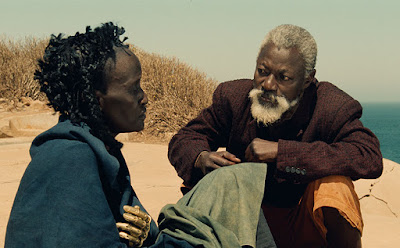 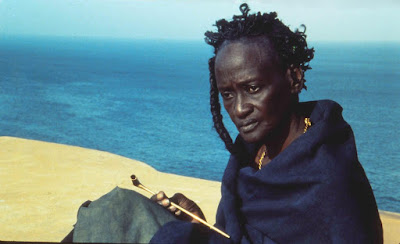 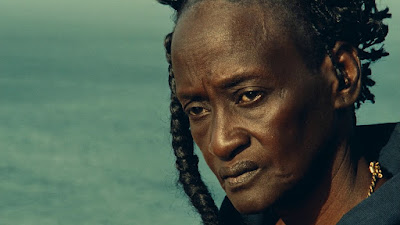 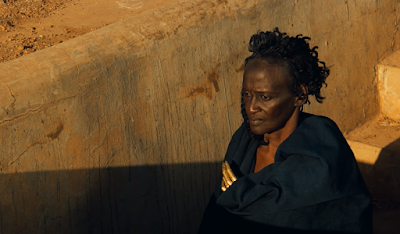 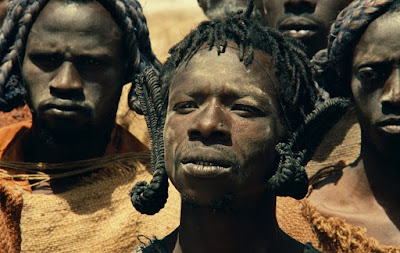 Profoundly pessimistic, arguably Africa’s answer to von Stroheim’s Greed (1924), viewing the World Bank and the International Monetary Funds as vicious enemies of the people, Mambéty offers a sharp, unsparing critique of globalization, bringing theater of the absurd to Senegal and the continent of Africa, adapting a Swiss play written in 1956 by Friedrich Dürrenmatt entitled The Visit, which has appeared in multiple variations, including a Broadway production in 1958 directed by Peter Brook that was nominated the next year for a Tony Award for Best Play, a Swedish film by Bernhard Wicki entitled THE VISIT (1964), starring Ingrid Bergman and Anthony Quinn, and a musical production in Chicago at the Goodman Theater in 2001 directed by Frank Galati starring Chita Rivera and John McMartin.  Despite the critical success of Mambéty’s earlier film, TOUKI BOUKI (1973), the director did not produce another feature for almost twenty years, making only two features in his entire career, but this African production may be the most heinously extreme, bleak and surreal, a dark satire on corruption that is unparalleled in critiquing neocolonialism, Western values, and African consumerism.  Both African directors Mambéty and Ousmane Sembène were extremely suspicious of Western colonialist values and its allegiance to materialism corrupting the African shores since independence in the 1960’s, with Mambéty providing the central thrust of the film, suggesting Africans are “betraying the hopes of independence for the false promises of Western materialism… We have sold our souls too cheaply.  We are done for if we have traded our souls for money.” ("The Hyena's Last Laugh - A conversation with Djibril Diop Mambety").  The film mirrors recent history, as African nations have found themselves under massive burdens of unending debt when appealing to Western institutions like the World Bank for economic aid, basically crippling their autonomy, continually remaining economically dependent upon the West, which is simply replacing one exploitive colonialist system with another, creating a “puppet” independence, fed by the lure or mirage of “real” independence.  Significantly, much of the film was actually shot in Gorée, a notorious slave port, the last African exit to the New World during the trans-Atlantic slave trade, a town built on a system of Western exploitation, where the false promises of prosperity never materialized.  Perhaps the most peculiar element of the film is when seen as a continuation of his earlier film Touki Bouki (1973), becoming an extension of those two original characters, with Anta getting aboard a ship bound for Europe while Mory stays behind.  This film imagines their lives several decades later, having been shaped by differing circumstances through the ensuing years.  Set in the desolate village of Colobane on the outskirts of Dakar, Mambéty creates a fictional universe surrounding his home town in much the same way as Nobel Prize winning author Gabriel García Márquez imagines the town of Macondo, which may as well be the center of the universe.  All eyes of the viewers are drawn here, with a seemingly endless desert landscape awaiting just outside town, where wild animals lurk, like hyenas, a Senegalese symbol of evil, but also baboons, monkeys, vultures, an owl, seabirds, and elephants, with Mambéty suggesting humans take on animal characteristics, where a feeding frenzy of materialistic consumption is reminiscent of hyenas lurking just outside a kill waiting to gorge themselves.  Despite the African setting, the film follows the staged play very closely and is dialogue driven, yet could seemingly be transported to any setting, resorting to social realism, magical realism, and allegorical history, music by Wasis Diop, the director’s younger brother.

Working again with nonprofessionals, Morey has been transformed into an aging Dramaan Drameh (Mansour Diouf), a kind and friendly local shopkeeper with a store that is filled with empty shelves, who is nearly bankrupt himself, yet his customers demand drinks, so he gives away free drinks, knowing they cannot pay, or items on credit that his wife Khoudia Lo (Faly Gueye) disavows, always keeping a watchful eye upon him, as if she is the balance upon which the business rests.  Nonetheless, his place of business is a community meeting grounds for drink and conversation, a social hub where one can obtain the latest news as well as stock up on needed grocery items, like rice, a staple in this arid region.  Dramaan is so popular, his name has come up as a likely choice to replace the next mayor, which is a position without power, as the city hall building has been taken over by creditors for non-payment, leaving them nowhere to conduct city business, just an example of the lingering poverty in the region, as everyone in town is broke, devastated by drought and unemployment, with little hope of breaking the vicious cycle that has creeped into and affected everyone’s lives.  But an official pronouncement is made, complete with street drummers, as later that day will mark the arrival of Linguère Ramatou (Ami Diakhate, discovered selling soup in a Dakar market), the reincarnation of Anta, a former resident who left town at an early age, returning now after an absence of 30 years as an old woman having amassed a great fortune, now richer than The World Bank, instantly reviving the hopes of the town, as she could be their salvation.  Dramaan, her former lover, is selected to lead a welcoming committee marking her arrival, with a train stopping at a long-abandoned station, appearing with an entourage of beautiful women of various nationalities, including a girl in pink dancing like an original (In Living Color) Fly Girl against the desert landscape, and after a cordial brief exchange, she announces the real purpose of her visit.  She promises the village 100,000 million francs (half of which they can share among themselves) if they will kill her former lover, Dramaan Drameh.  Seething with bitterness and resentment, she claims he betrayed her as a young teenager, getting her pregnant, then refused to recognize the child, paying off two witnesses to claim they slept with her as well, ruining her reputation by making her appear promiscuous.  She left town in disgrace and was forced into prostitution, with the child dying after a single year.  In utter disgust she proclaims, “Life made me a whore and now I will make the world a brothel.”  Ramatou’s sole purpose in returning is to take revenge upon the man who betrayed and humiliated her.  Mambéty himself makes an appearance as her counselor, a former judge who once ruled against her, recounting the actual events, providing the necessary evidence, convincing the town of the severity of the charges being made against Dramaan, as Ramatou steps aside and then patiently waits for an answer, remaining in a central location in town where she can observe everything.  Her hovering presence is like an omniscient force overseeing all, pulling the strings, like a spirit from the underworld, where she is instrumental in altering their mindset and ultimate destiny.

While the villagers instantly scoff at the offer, protesting that they would never succumb to her demands, swearing they would never compromise their moral principles by betraying their friend, “We are still Africans.  We are civilized people.  We won’t kill for money.”  However, Ramatou reminds them, “Either you get blood on your hands or you stay poor forever.”  Nonetheless people’s behavior suggests otherwise, as immediately they flood the markets with demands for new high-end products, all placed on credit, instantly amassing a great debt while collecting the latest in fashionable goods.  Even as giant transport trucks roll in from the desert carrying boxes of large expensive items like refrigerators, televisions, washers, dryers, stand-up fans, and air-conditioners, Dramaan’s wife refuses to be left behind and buys up the entire stock, immediately seen available for purchase in their store, which is continually packed and raided by customers demanding credit while taking whatever they want, turning into a full-fledged carnival atmosphere with a shooting gallery, roller coaster rides, a giant Ferris wheel, and fireworks, becoming an exaggerated and grotesque display of human greed, where Ramatou bleakly observes, “The reign of the hyenas has come.”  All of this is witnessed, of course, by Dramaan, who is fully aware of the implications, visiting every level of civil authority seeking help and protection, but they’re all under the same delusional cloud of accumulated materialism, where the mayor, smoking a Cuban cigar, has ordered a new typewriter, the chief of police has a gold tooth, new chandeliers are being installed in the chapel, and people that used to walk barefoot are suddenly adorned with new shoes from Burkina Faso, as people have decidedly turned against him en masse while still pretending to be his ally and friend.  Even the town’s spiritual leader lends an evasive answer, suggesting he hop on a train out of town, but when he tries, he’s met by a mass of villagers crowding around him, wordlessly preventing him from leaving, forcing him to accept his fate.  Developing a sense of resignation, he senses the inevitable, as the walls are moving in, subjecting him to a moral dilemma of being the sacrificial lamb for the greater good, where he’s even willing to accept the judgment of the village council, but he’s not responsible for their actions, which they must face alone.  Ramatou remains on the sidelines, refusing to budge even an inch, demanding full compliance, while behind the scenes she’s buying up all the factories, then shutting them down, putting everyone out of work in an attempt to coerce their behavior.  Without so much as a smile, she clearly seems motivated by nothing more than revenge, assuming the devil’s role, as she’s an avenging angel accepting nothing less than death for an answer.  Mambéty frames this outdoor communal scene with grace and poetry, surrounded by the emptiness of a vast landscape, skillfully keeping the murder out of sight, cloaked behind a moving wall of people that surround him, literally consuming him, yet the result is devastating and impactive, where only the clothes he was wearing remain behind, with a bulldozer erasing any signs left behind.  Rather than restore the town, as villagers had hoped, Ramatou’s Westernization has instead destroyed it in the name of progress, likely bulldozed out of existence, living on only in memory.  In fact, the real village of Colobane was swallowed by Dakar’s sprawl in the 1990’s, a victim of its own development.  Globalization is viewed as an extension of Manifest Destiny, a doctrine justifying America’s outreach and expansion, now viewed purely on economic terms instead of territorial, removing any traces left of African autonomy.  In Mambéty’s vision, Africa’s future is sealed, the last African refuge of faith and hope has been thoroughly decimated, leaving behind only bitterness and cynicism, devoured by a hideous clamoring for greed.