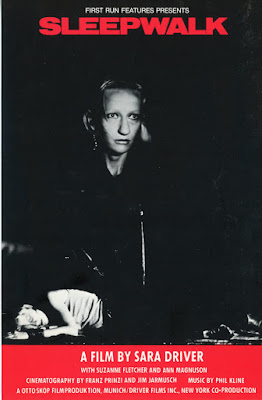 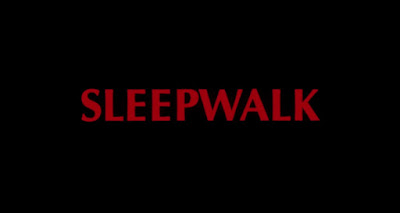 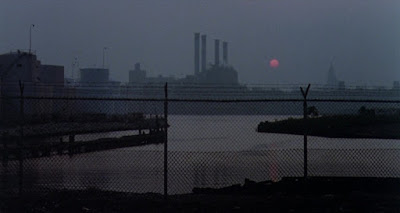 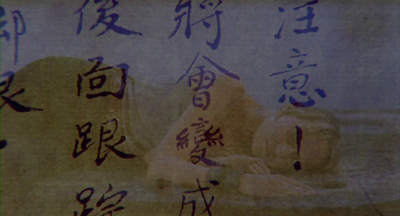 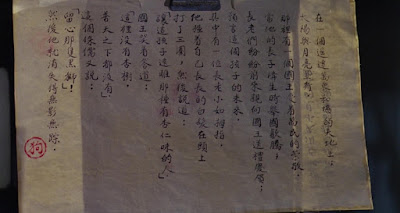 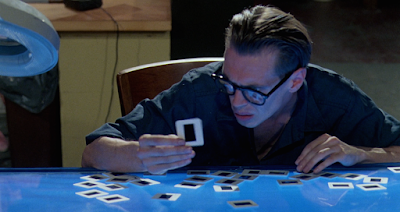 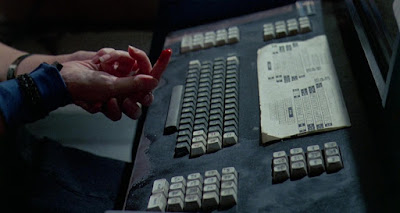 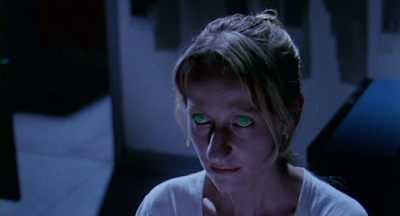 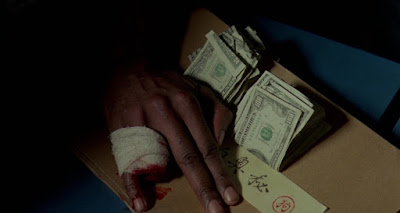 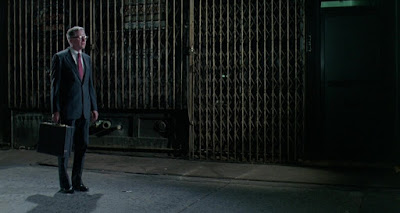 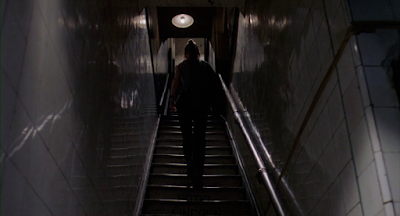 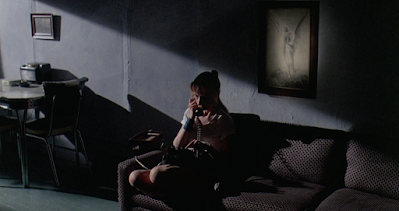 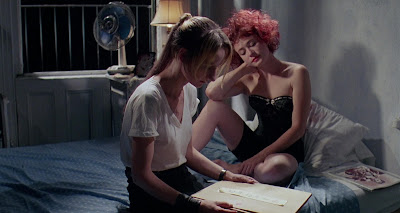 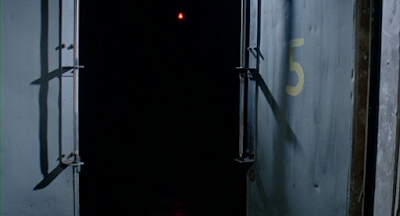 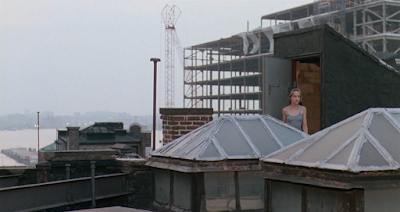 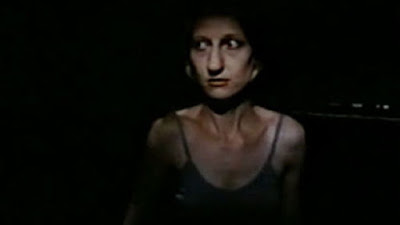 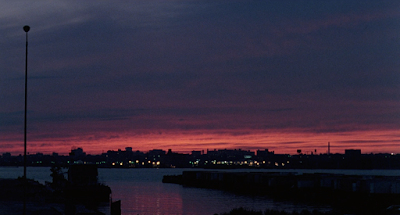 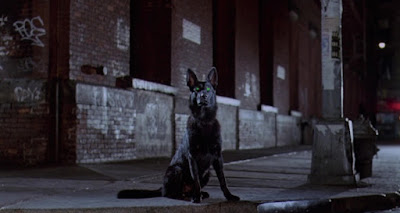 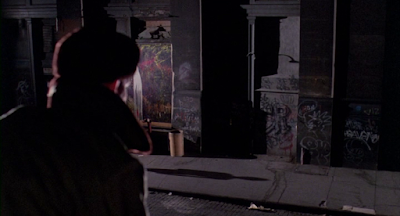 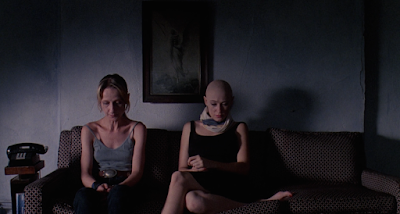 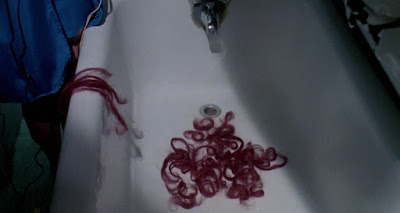 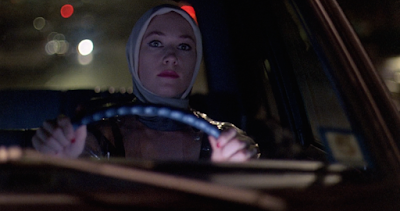 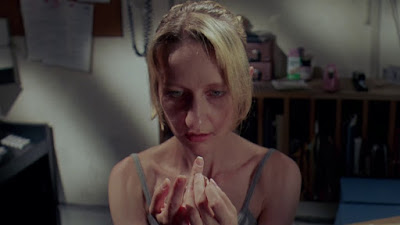 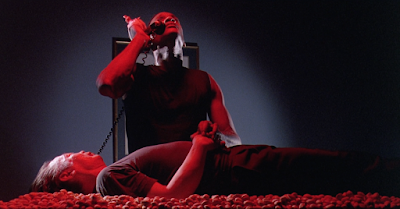 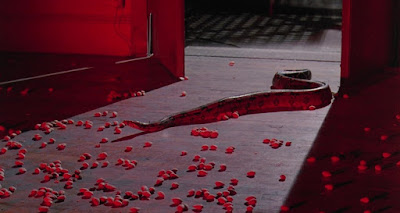 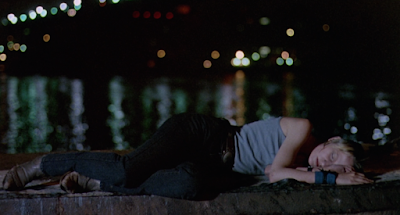 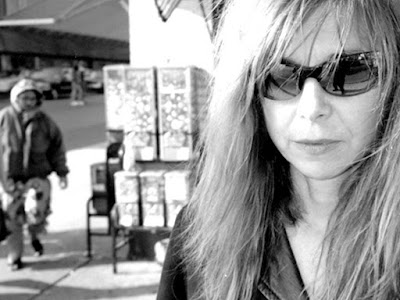 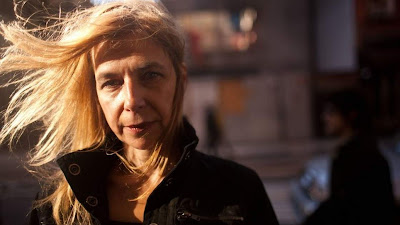 Coinciding with the UCLA black student filmmaker’s L.A. Rebellion movement on the West coast, among the driving forces of a new American independent cinema were also NYU film students of the late 1970’s and early 80’s that included Spike Lee, but also Jim Jarmusch, whose name became synonymous with the burgeoning New York underground art scene centered around the CBGB music club, forming a close collaboration with Sara Driver, his future partner, co-writing her student film YOU ARE NOT I (1981), while also sharing the cinematography duties on this film with Frank Prinzi, incorporating long takes with static camerawork.  Along with Phil Kline, the film’s musical composer, they formed an eclectic group of cutting-edge New York artists known as No wave, which included various other impoverished artists living on New York’s Lower East Side.  Their limited means allowed them to produce more radical and experimental art work, coinciding with a pre-AIDS historical period when the city of New York was near bankrupt, forcing people to take whatever odd jobs they could just to pay their rent.  According to Driver, she worked in a Xerox shop along with Kim Gordon of Sonic Youth, where the long, monotonous hours Xeroxing documents may have contributed to the overall somnambulistic mood of the film.  According to a 2012 interview from Huffington Post, "Flashing Back With Sara Driver on the Bowery",

This area was not heavily populated.  It was like a war zone.  You had an instinctive reaction to the street.  You had to be tuned into everything around you otherwise you would get hurt.  You would run into your heroes on the street, like Burroughs, and they had an influence on your work.  And that was a wonderful time in the city when we had repertory art houses and a lot more European films.  Studios didn’t own theaters the way they do now.  I got a great education from NYU and from these cinemas.  I was influenced by Jacques Rivette’s films, and Tarkovsky’s.  Their magical realism was a big influence on Sleepwalk.

In fact, this film recalls the inventive cloak-and-dagger playfulness of Rivette’s Céline and Julie Go Boating (Céline et Julie vont en bateau) (1974), or the Juliet Berto character in Out 1 and Jacques Rivette R.I.P. (1971), where an underlying sense of nocturnal danger lurks just underneath the surface, shot almost entirely at night within just a few city blocks, where the now gentrified intersection of Soho, Chinatown, and Tribeca reveals what was then a run-down and decaying neighborhood with streets noticeably empty, not to mention pervasive signs of graffiti, where much of this film feels as if drifting in a trance, creating an increasingly spooky effect, all centered around a mysterious Chinese manuscript in The Year of the Dog.  Selected as the opening night film for Critic’s Week at the 1986 Cannes Film Festival, the film seems to exist in its own netherworld, like an alternative reality, where any number of things go wrong or just don’t seem right, where instead of tying up loose ends, like the perpetual search to solve crimes with doglike tenacity by Peter Falk’s Lt. Columbo (1968 – 2003), this film is more about the loose ends themselves, incidents with no resolution, things that happen for no apparent reason, mysteries that remain unresolved, where we’re instead aimlessly drifting through time, as the title suggests.  This film was a major influence on Jarmusch’s GHOST DOG: THE WAY OF THE SAMURAI (1999) and the avant garde surrealism of Guy Maddin, particularly on his outlandish screenplays that just cry out for novel cinematic techniques and special effects.

A surrealist fantasy based on someone’s experiences working at a computer all day, positioning itself between dreams and reality, between first person subjectivity and accidental voyeurism, the film has the look of a B-movie with a manuscript that takes on characteristics of a children’s fairy tale, while the film features an overworked central protagonist, Nikki, Suzanne Fletcher, who actually resembles a ghostly silent film character, yet she’s a single-mom who works at a Soho copy shop, never showing much expression, leading a relatively mundane existence, accidentally cutting her finger, drawing blood, while her eyes also momentarily glow green.  In addition, playwright Harvey Perr is the boss of a nefarious backroom operation performing weirdly inconsequential assignments, with Steve Buscemi in heavy glasses carefully inspecting a table filled with photographic slides, as if searching for a missing ingredient, an Asian woman blithely collects paper strips, one after another, where it would be hard to find a more boring job, while another loopy-eyed woman paints the exact same watercolor.  Adding a great deal of spice is Nikki’s roommate Isabelle, an utter revelation by performance artist Ann Magnuson in flaming red hair, who just offers plenty of energetic personality and pizzazz in an otherwise slowly moving picture, dropping by her job to borrow money in a humorous appearance, as if moving in an altogether different speed.  Nikki’s world is turned upside down when two shady characters, Stephen Chen as Dr. Gou (whose name means “dog” in Chinese), and Tony Todd as Barrington Rutley III (with bandaged and mutilated fingers), hire her to translate an ancient Chinese scroll, no questions asked (Nikki just happens to speak fluent Mandarin Chinese!), which appears to have been stolen by Barrington, seen earlier in what resembles a shadowy German Expressionist dream sequence bathed in a red light.  Ordered to never let the manuscript out of her sight, Nikki works late, but after she leaves the computers and telephones turn back on, seemingly expressing a life of their own.  As she walks home alone, bizarre events occur, with an off-putting sound design featuring a highly inventive percussive score that forebodes upcoming dread.  When she sees a young boy in his underwear standing alone at an intersection, she graciously helps him across the street, only to see him run back across and stand there again, a young girl throws confetti into the air, while a grown man in a suit barks at her on the sidewalk.  These idiosyncrasies simply appear and disappear, seemingly on their own wavelength, adding a mysterious texture to ordinary reality.

Waiting home alone is her young half-Chinese son Jimmy (Dexter Lee), quickly throwing some TV dinners into the oven, suddenly realizing the manuscript smells like almonds, with Isabelle arriving home agitated, complaining about a long list of disappointing boyfriends before remembering Nikki’s boyfriend called earlier.  When she calls back there is no answer, but Driver leaves a stark image of the phone ringing along with an unmade bed next to an open window in his empty apartment.  The next morning, arriving to work early, the manuscript itself seems to be providing the film’s narration, spoken by an unseen Asian woman’s voice, as it was at the film’s opening, which then intermingles with Nikki speaking the words in her head as she transcribes them.  As if by magic, an Asian woman arrives at her desk, identifying herself as Ecco Ecco (Ako), the likely narrator, claiming the stolen manuscript belongs to her, describing it as dangerous, asking to meet later on a deserted rooftop, but she never shows.  Instead, police arrive later at the office with the gruesome news that she’s been executed, strangled by her own hair, reporting several fingers missing.  Done for the night, she leaves the office alone, where certainly one of the hair-raising scenes of the film is the old-fashioned elevator ride down seven stories, filled with ominous sounds, inexplicably stopping at every floor, where the open door reveals something different on each floor, offering a window into people’s private lives, but also just a collection of strange and curious things, meeting Barrington at the bottom with his missing fingers.  On a barren street resembling a desolate wasteland, she encounters a black dog whose eyes also glow green.  By the time she gets home, Isabelle’s head has turned bald, resembling the story in the fairy tale, where little by little, the manuscript seemingly has powers that begin to take over her life, with her finger magically cured afterwards.  In a mindboggling idea that sounds utterly preposterous, hoping to make her feel better, Nikki suggests Isabelle and Jimmy spend a few days relaxing in an Atlantic City hotel by the beach while she works on the manuscript, where Isabelle could gamble and Jimmy could find other kids to play with.  Leaving in the dark of night, on the other hand, just feels overly weird.  Of course, Isabelle, her head wrapped in a scarf, makes a quick stop, visiting a Chinatown herbalist for hair treatment with Jimmy sleeping in the back seat, when the car gets stolen by a small-time crook (Richard Boes), who hilariously brings the car for quick cash to an overly pregnant fence who freaks out when she sees a kid in the back seat.  Utterly clueless as to what to do, the film indescribably takes off on two tracks with an inept kidnapper who really isn’t such a bad guy, though his archaic methods are crude, and Nikki, equally in the dark, stammering out into the streets calling her son’s name, eventually growing tired, laying her head down by the East River and going to sleep, where we’re never sure if what transpires is real or simply imagined.  Macabre and unsettling, Driver really provides an alternative universe that feels completely original.