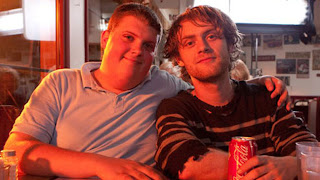 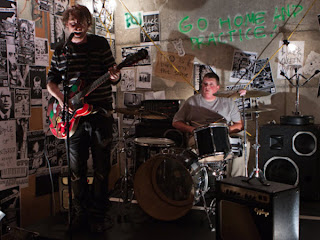 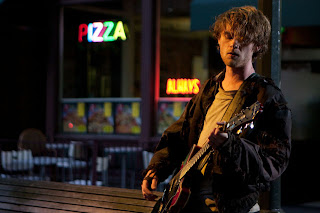 Though structurally quite different, this film bears a resemblance to the Stephen Chbosky novel and movie The Perks of Being a Wallflower (2012), especially how kids project themselves into a world of fantasy, where Troy, Jacob Wysocki from Terri (2011), a nerdy and oversized high school kid has been an outcast for years, now fat, ostracized and alone, where his home life is worse after his mother died, leaving him and his younger brother to fend for themselves with their Dad, Billy Campbell, something of a Marine drill seargent, an overly strict father whose kids actually call him “sir.”  The film plays out like a working class fantasia immersed in the gritty reality of Seattle, a place where too many wayward kids end up as runaways or homeless.  The fantasy element is immediately apparent, as Troy is standing on the curb imagining his own successful suicide jumping in front of a bus, then acting it out in real life except some kid comes out of nowhere to rescue him, literally tackling him just inches away from the oncoming bus, saving his life.  What’s interesting about this Good Samaritan kid, Matt O’Leary as Marcus, is he immediately asks for $20 for saving his life, something that makes the poor kid feel even lower.  Despite the occasional intersect, both actors play dual leads throughout the film, as their lives are definitely on different tracks.  Troy at least has a home and something resembling a stable life, even as an outcast, while Marcus has already gotten kicked out of school, kicked out of house and home, and kicked out of his own band, a punk group called P.O. I., which doesn’t leave him many options, so he kind of hangs onto this fat kid who’s too insecure to tell him to get lost.  Marcus invents an entire fantasy world around Troy, pretending to be friends where they play in a rock band together with Troy as the drummer, occasionally crashing at his house, as he literally has nowhere else to go.

Mike McCready, lead guitarist for Pearl Jam, writes most of the musical score, creating a kind of offscreen punk musical soundtrack that’s not like anything else out there, yet it whole-heartedly embraces the interior world of a couple of outcasts, both angry at how the world treats them.  While Troy is a gentle giant, a soft-spoken kid with a large body, but meek as a lamb, afraid to talk to girls or even find a friend, Marcus is a completely energized, hard corps punk rocker, but he’s such a rebellious fuck-up and so unreliable that everyone’s abandoned him literally ages ago, as he’s so disappointingly unreliable that he’s screwed people over so many times until now they’re sick of him.  But for Troy, time spent with Marcus feels like an actual adventure, a continual spiraling-out-of-control road trip, something he’s never had as he barely leaves the house, spending gobs of time playing video games on his computer, apparently communicating online with other computer geeks.   While Marcus inevitably gets into trouble, breaking into his own family’s house, stealing whatever he can find, including pills from medicine cabinets, where life is a continual quest for getting high, the problem is he often ends up sleeping on the street, continually running out of options.  When Troy’s Dad lets him shower and have a meal, the guy eats like a feral animal that hasn’t seen food in months.  The contrast in lifestyles is the crux of the movie, as Marcus is continually driving Troy to be in a punk band, as if this is every guy’s ambition.  Initially Troy is literally swept off his feet in a rush of unbridled energy, where at least occasionally he actually runs into cute girls who happen to like underground music and visit punk clubs, where Marcus grabs the onstage limelight, a guy that literally feeds off the attention, if only momentary.

But like everybody else, Troy gets lied to and hoodwinked by Marcus, who makes promises he can’t keep, never showing up when he’s supposed to, and letting him down time and again.  Troy’s attempts to learn how to be a drummer are pathetic at best and his first onstage experience turns into a brief momentary disaster that instantly goes viral on YouTube.  While Troy is humiliated and embarrassed, he’s dumfounded at all the attention he receives afterwards, where any recognition, even negative, is more than he’s ever received before.  This kind of drives him to take himself more seriously, where  he spends endless hours learning how to play, where he’s never very good, but just the thought of playing onstage feels like a dream.  Of course, Marcus continually lets him down and screws him over, bringing heavy doses of unwelcomed negativity into their relationship, most all of it coming from a drug-addled brain that’s nearly fried, eventually crashing on the street in a frightful mix of overdose ecstasy and panic, where each guy’s life is nightmarishly spiraling in opposite directions.  Troy’s decision to be there for the recovering kid in the hospital speaks volumes, while Marcus remains the same reckless fool who starts hoarding all the mind-altering pills.  While there’s nothing remotely pretty about any of this, the edgy tone of never being accepted in life comes through loud and clear, where kids all-too-often are afraid to fail, which prevents them from even trying, where they just accept their miserable solitary existence.  This film’s upbeat tone is expressed through the anger and aggression of punk music, where no one needs to be like anybody else, or care what others think of them, as life can get ugly, as imperfect people are prone to making mistakes.  Jacob Wysocki and Matt O’Leary both excel at conveying the pent-up confusion in a teenagers’s life, where you want so much more than what you have, which is an unending emptiness.  Perhaps the film is overly optimistic, but it interestingly has a kind of PUMP UP THE VOLUME (1990) feel where people can come out of the shadows of teenage obscurity.
Posted by Robert Kennedy at 9:01 AM